The latest patch for Final Fantasy 14, 5.05, dropped this morning, adding a good chunk of new content into the game.

This patch makes another change to what gear is best in slot, so if you just wiped the sweat off your brow collecting all those Innocence Extreme accessories, you’re out of luck. Fortunately, this patch also comes with some fun stuff, like the addition of the new map portal area, as well as balance changes to jobs.

Hardcore raiders, now is your time to shine. The Savage version of the Eden raids that dropped several weeks ago are finally here. This means you can beat some really hard versions of those bosses to get some new loot. The item level of the equips that drop from these raids is 470, which makes most of gear the current best in slot.

To unlock the Savage raids, you have to be a level 80 combat job, have completed the Eden’s gate quests from last patch, and you speak with Lewrey in Amh Araeng to get the quest “The Next Piece of the Puzzle.”

For those after loot, the Dungeons of Lyhe Ghiah have been added to the game. This is Shadowbringers’ equivalent to the Aquapolis and the Lost Canals of Uznair. After opening a treasure chest from a Timeworn Zonureskin Map, a portal has a chance to open up, sucking you and your party into this new dungeon.

Exclusive loot will drop here, including the materials to make the latest glamour, minions, and more. This delightful minion of Fuath, from one of the main scenario dungeons in Shadowbringers, also drops from maps. 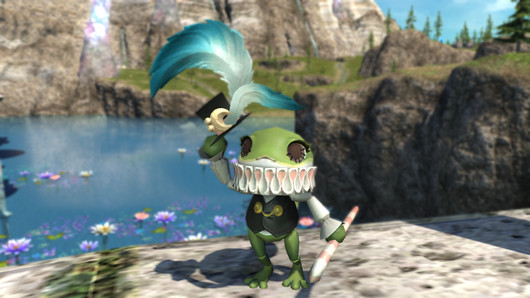 I must have this frog man
Square Enix

New tomestones of phantasmagoria will start to drop

For those who don’t want to raid or maybe just want to gear an alternative job, you can now use these new tomes to upgrade your gear. You’ll be rewarded these new tomes from doing duty roulettes and other tome-giving activities. Trade them in to Aymark in Eulmore. You’ll find him behind the desk where all the other trade-ins are down in Eulmore.

The gear that drops has an item level of 460, with augmented equips being 470. This gear is better than gear you’d get doing Innocence Extreme or Titania Extreme, so might as well replace some of those accessories.

Note that you can only get up to 450 phantasmagoria tomes a week, so pick the gear slots you spend them on wisely.

Shadowbringers’ release absolutely gutted the Astrologian job. It used to be one of the most desired healers for its ability to disperse several buffs across the party while being able to hold its weight, but the changes made in 5.0 sunk Astrologian to the bottom of the healer pool. Fortunately, a bulk of its skills got buffs, from a cast time reduction to a potency increase. Whether or not this actually helps Astrologian become the powerhouse it was before remains to be seen, but hopefully this will at least make the job worth playing again.