At first, Dragon Quest Builders 2 struck me as odd. For what I expected to be a sandbox game, it sure made me sit through large amounts of dialogue. The non-playable characters, taken from the Dragon Quest franchise, will chat you up all day. At the start, this annoyed me but, as I progressed, it was these same characters that kept me playing.

Dragon Quest Builders 2 places the protagonist, a builder, in an alternate Dragon Quest reality. In this timeline, the Hero from Dragon Quest 2 — the 1989 NES game — betrays their quest and accepts the Dragon Lord’s offer to rule half the land. As it turns out, a world run by baddies isn’t all that terrible. When evil wins, there are still plenty of nice people left afterward. These are the characters we spend time with in Dragon Quest Builders 2.

Although it has a storyline, Dragon Quest Builders 2 borrows a lot from sandbox games. Among the many ways to play, you have the option to fight, build, mine, and farm. The game uses a block-building style, a la Minecraft.

However, what distinguishes it from Minecraft, and what made it meaningful to me, were the non-playable characters and the way they interact with the world. The characters in Dragon Quest Builders 2 made it easier to play single-player, because it didn’t feel as lonely as playing Minecraft by myself. 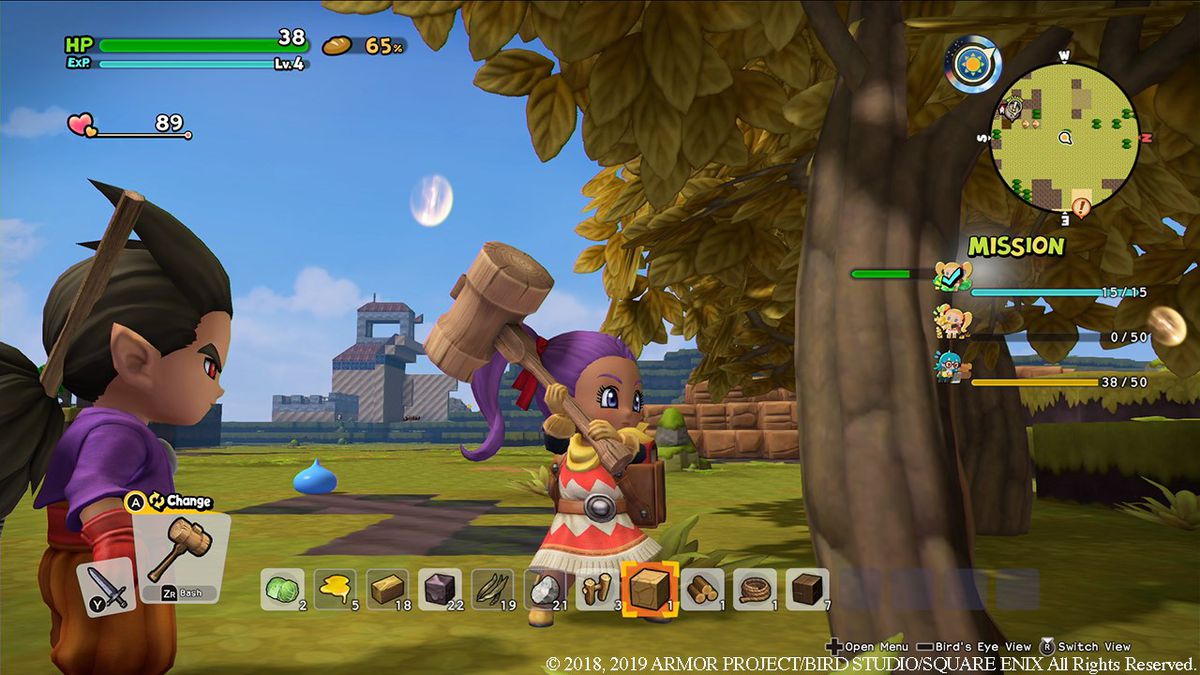 Playing Minecraft by myself feels isolating. There is no dialogue. You scarcely run into towns. It features a simple, contemplative soundtrack. It is relaxing, but it can start to feel lonely after a while. Because of this, I just could never get myself to sustain single-player for long. All the times I have binged Minecraft was with other people, in multiplayer mode.

Unlike Minecraft, other characters are central to playing Dragon Quest Builders 2. The player can only progress through the game by recruiting friends to help build up the town.

In Dragon Question Builders 2, each character does their own thing, and contributes to a larger cause — building a town — in a way that is relevant to their character. Depending on the interests of each character, the other townspeople will take care of different chores like watering, tilling the soil, or guarding crops from monsters. A character named Rosie likes gardening; so she’ll take care of tilling the soil and watering the plants while you adventure.

When you leave town, Malroth, the god of destruction, comes with. He runs around and helps you collect resources and fights battles alongside you. He is very reactive to the environment and will initiate battles, mine, and collect resources on his own. When you accomplish something in the game, he will always be there to give you a high five or to applaud you.

I found this NPC companionship made the game a great single-player experience for me. This was especially important because I only played it solo, on the go with the Switch. There is online multiplayer, a feature not in the original Dragon Quest Builders, but I was perfectly content to play by myself. I had the time to do what I want while still building an entire town. If I want to do something else like go explore the island, I needn’t worry. Each townsperson takes care of their own role and maintains the settlement.

Dragon Quest Builders 2 felt more like playing at home with my family, than it did a single-player experience. I wasn’t some god character, just the another character planting seeds as another tilled the soil. And in the end, I felt less alone.