Playing Marvel’s Iron Man VR is a bit like being Stark in the first MCU Iron Man film. As I got the hang of the velocity of my palm thrusters and how to arc my trajectory in the air, I overshot my landing point an embarrassing number of times, pushed myself in the wrong direction a couple times, and crashed into some walls, thankfully without any of the injuries Tony would actually suffer.

After my initial few minutes of rough flying, though, I found my flying footing with Camouflaj’s intriguing gameplay. And while I’m probably not quite ready for a spot on The Avengers, the amount of intuitive flying freedom Marvel’s Iron Man gives you makes for a surprisingly enjoyable ride in Stark’s shoes.

So, a little bit about the groundwork of how Marvel’s Iron Man works — it’s not on rails, though you can shoot. You control Iron Man’s flight by mirroring the movement of his palms with your PlayStation Move controllers. Hold them parallel to the ground, and they act as open-faced palms to blast upward, while turning them perpendicular will allow you to zoom forward. You can thrust independently with each hand, though, so you can keep yourself hovering with your left hand while blasting hacked Stark drones with your right. Tony also has an effective rocket punch move that not only works as a melee skill but also propels you forward in quick bursts, which can be an effective dodging maneuver.

All of these moves do take some time to nail down — I imagine if you spent only five minutes with Iron Man, you might come away dissatisfied. But my 20-minute long demo, showing off a training course near Stark’s seaside mansion, an in-flight cutscene, and a mid-air chase sequence demonstrated to me the clever and engaging gameplay mechanics.

I absolutely fumbled my way through the training course. Stark’s AI Friday and plenty of on-screen prompts helpfully tried to teach me how to maneuver like a pro, but I slammed into the cliffs of Malibu, California as much as Tony did when his house came under attack in Iron Man 3.

If you’re interested in more upcoming VR experience, be sure to check out our preview of other PSVR games we’re excited to play.

The tutorial was not my proudest moment, as I overshot landing points and zoomed past race markers. The tools were there for me to take advantage of them, but they really need to be put into practice to learn them. Camouflaj’s system makes a lot of smart calls, and having a full 360-degrees of motion to turn around and fly in prevents the experience from ever feeling limited. (Given that range of motion, though, Marvel’s Iron Man could be disastrous to your living room setup if you turned around as much as I did and also don’t own PSVR extension cables.)

But when I took to the skies, I finally started to get the hang of things, mostly. I definitely still had to try aiming at a moving target a couple of times, but I had a much better sense of how to angle myself both in a chase and in combat to maintain the upper hand. 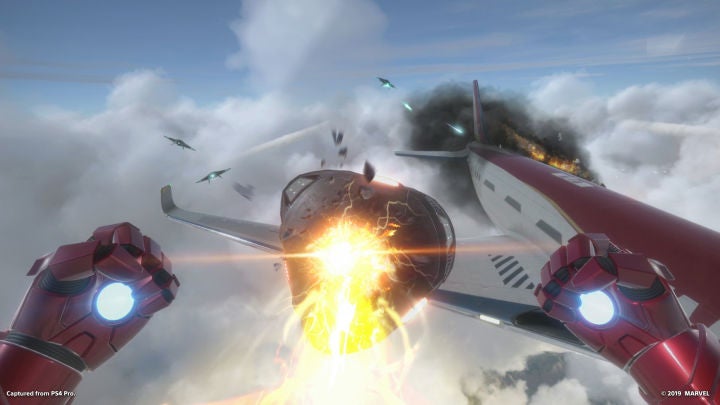 I only got a small taste of the story beats Iron Man VR is aiming for — with a Ghost-like villain taking over the Stark jet and teasing the demons of Tony’s past. While I’m intrigued by how it may twist familiar Iron Man lore, I really can’t wait to put back on the Iron Man suit in VR and sharpen my flying skills.

The moment where Marvel’s Iron Man VR clicked for me, though, and really made me want to come back to it, came when the suit’s mask slammed into place on my face, shrouding my vision in total darkness until the familiar UI I’ve seen in half-a booted up and the sky unfolded before me. It reminded me a lot of Batman: Arkham VR and how cool it felt to have the cowl come over my face. (Licensing demands aside, how companies have not wanted to capitalize on this sensation with the biggest pop culture icons of the modern era is a mystery to me.)

Arkham VR definitely had its gameplay limitations, but it nailed that sensation of putting you into the shoes, and mask, of a hero, and my short time with Iron Man VR gave me a similar feeling. And with as robust of a gameplay system as appears to be in place, I’m excited to explore the skies and life of Tony Stark in the full game…and maybe not fly myself into so many rock walls next time around.

Jonathon Dornbush is IGN’s News Editor, PlayStation lead, and Podcast Beyond! host. Talk to him on Twitter @jmdornbush.