I’m curled up in my chair at home. The Forge, the location where I can upgrade and admire my combat suits, called Javelins, is on my screen. I’m looking at my own Javelin, in fact, in all its glory. It’s love at first sight.

I’m a game designer of more than seven years with a deep and thorough love for space games. I’ve worked on games in collaboration with NASA and released the game Objects in Space recently, which is a hardcore space trading sim. In short: I am familiar with many of the challenges that come with sci-fi and space games.

And Anthem has struck a chord with me.

Anthem has received a lot of criticism since its launch, and I agree with many of the issues that others have pointed out. What the game does right overshadows what it does wrong, however, and my enjoyment and love for the game’s polished and unique core continues. If BioWare’s goal was to deliver high fidelity air combat using mech suits, they have definitely delivered on that goal.

But let’s take a minute to define that term, “fidelity,” in this context.

Game designers describe something as high fidelity when we give players a feeling of executing mechanics and systems with the perception of high precision as well as ease. We want players to feel both skilled and clever. Good things happen when we can deliver a sense of competency to the player. And Bioware was able to deliver many high fidelity systems in Anthem.

So let me tell you about this love story of mine, the love story between me and my beautiful, slick Interceptor.

The thing I admire the most in Anthem is its mastery of sound and animation, as both seem to be all about feel-good design. Let’s observe the short cutscene that plays when you jump into an Interceptor Javelin:

Can you hear the hollowness of the Javelin’s shell, waiting for you to jump in and fly? Do you feel the sensation of how snugly it fits around the body? The texture of the fabric? The scent of the metal? The ease of your character climbing in, knowing that you obviously are a pro by how clear it is that you’ve done this so many times you don’t have to think about it anymore?

There is a cinematic quality and obvious care involved in creating these small sequences for the player’s enjoyment that I thoroughly enjoy, both as a player and a game designer. You don’t spend production resources on creating gems like this unless you really care about selling the experience of being inside a machine built for combat. This animation plays before every mission, and I enjoy it every time. Be sure to go through it at least once wearing headphones so you can pick out the subtleties of the sound design.

But Anthem not only delivers that weighty experience in its cinematic sequences, BioWare also knows how to follow through in all aspects of combat.

Combat built on the Joy of Movement

As a game designer I can recognize the experiences out there that want to create the joy of movement in the player. Players rarely talk in those terms, but everyone still knows when they encounter something satisfying in a dynamic combat system, even if they don’t recognize why it feels so good.

BioWare delivered a fast-paced and versatile combat experience in Anthem without relying too much on loadout. While you can choose between many different guns for your Javelin, the best part of combat is how fluidly you can switch between movement abilities, flying, and using your guns or skills. And that satisfaction takes place no matter what you load onto your Javelin.

The Interceptor javelin in particular is a masterclass in delivering on that promise. Switching between all these states feels both effortless and seamless. While true mastery of the Interceptor’s abilities may take some time, it is accessible enough to feel satisfying even if you mostly button-mash your way through an encounter.

The Interceptor javelin can be used to jump, dash, fly, air-dash and zip between enemies while dishing out melee attacks in ways that are akin to dancing. In fact, some movement resembles visual design and animation that reminds me of a ballet. I have made the comparison to Spider-Gwen multiple times when playing, and it’s a good fit.

I have a deep love for how the game manages to deliver such a high fidelity experience while flying the Javelins, as these are systems that clearly received a lot of love throughout production.

BioWare translates the complexity of using a mech suit with essentially six degrees of freedom of movement into a usable system that leaves lots of room to make second-to-second decisions, both in playful movement and strategically while in battle. I can switch between sniping at enemies, dashing into their midst to melee as well as backflipping up in the air to smoothly transition into full-speed flight, and I can make those fast-paced decisions without input or clunky animations getting in my way. That’s a high-fidelity experience: I’m not struggling with the controls or systems, even though I have many viable tactical options. Everything just flows, which feels great as a player.

To go into more detail, let’s look at the input functionality that takes place while steering mid-air.

Any gameplay that takes place in more than the four degrees of the planar movement – for example scuba diving – is extremely difficult to translate onto a screen. Working with NASA on games that feature zero-gravity movement taught me that lesson the hard way.

Most people just aren’t used to thinking about how to control flying or floating objects in 3D space, so steering, twisting and turning in mid-air is hard, and takes an excessive mental model for players to understand the space. For six degrees of freedom (see image), we don’t only need to understand planar movement (forward, backward and sideways), we also need to have an idea of the space around us to consider rolling, pitching and yawing. 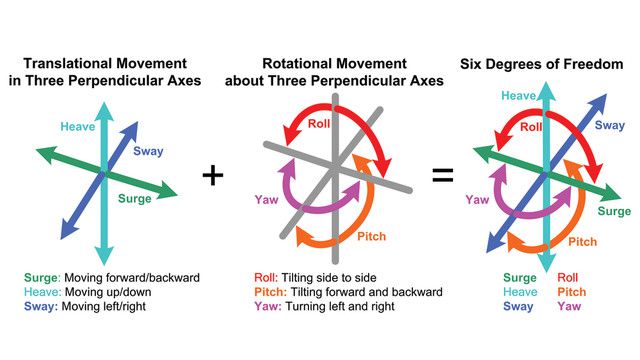 A visual guide to degrees of freedom
Leading Ones

BioWare solved this by putting clever restrictions on the freedom of steering your javelin: Within a boxed field of the screen space, players can move the javelin around using the left thumbstick to dodge obstacles without changing direction. Your character will only change direction if you steer the javelin outside of that boxed frame using the right thumbstick.

This approach hits the sweet spot of giving you just enough restriction in movement that your brain has enough time to process the transition without it feeling delayed, while not limiting your tactical options. It expresses the urgency and satisfaction of fast, forward momentum without also making me feel like I’m out of control. It’s a great compromise that does everything the game needs to do without overwhelming the player.

Think of it as two different input systems depending on whether or not you’re trying to adjust flying direction in detail — boxed steering to avoid obstacles — or on actually changing course — right thumbstick input. The game gives you simple and yet effective tools for complex navigation, which is what satisfying design is all about.

There are plenty of counter-examples to this approach where flying or steering feels unintuitive, slow, clunky or even too hectic. You know this pain if you have played the first Mass Effect and have tried to steer a Mako. You also understand how things can go wrong if you have designed and built a terrible spaceship in Space Engineers.

Essentially any game that treats steering in six degrees of freedom as a one-to-one translation of moving a thumbstick or mouse, or only allows steering when reaching the edges of the screen with the crossair, will give humans grief because our mental model of navigating this much freedom of movement can hardly keep up.

BioWare has avoided that problem with Anthem’s clever design.

I’d like to give a quick shout-out to the design of the crossair UX during combat, because it truly is a thing of beauty, and I wish more games would adopt it.

The designers recognized that managing hyperspeed combat while also aiming, shooting, flying, and using complex skills requires a lot of attention to be locked on the focal point of the screen to keep up. The game communicates a lot of information to players through the crosshair, which means you never need to remove your focus from the direction you’re moving or the enemy you’re fighting to get intel about your weapons and that status of each battle.

The crosshair tells you when you have killed an enemy, but before that point it will also tell you when you’re aiming at one in the first place. The crosshair will show the cooldown for your skills so you always know how long it will be before you can use that ability again. There’s aim assist, but it’s so smart and slight that it doesn’t intrude.

The crosshairs simply give me the information I need, with enough aim assistance that I don’t feel overloaded when juggling all these actions at once, and the design does all this without making me feel as if the game is aiming for me. That’s a fine line to have to walk in terms of design, but Anthem pulls it off.

The player isn’t likely to notice these details as aspects of the game’s design, but they will feel like they’re getting the information they need as they fly their Javelin into and throughout battle. The player is empowered, without the game becoming too easy. And being empowered feels amazing.

A love for cinematic storytelling

Anthem’s approach to cinematic storytelling within the framework of modern video games and play session requirements made me skeptical at first, but I’ve come to appreciate how BioWare handled these challenges.

Many modern games grapple with the problem of wanting to deliver cinematic or deep story content while competing with so many fast-paced and short-play session games on the market.

Anthem walks that line by separating much of the story flavor and delivery from the missions and combat sessions. Playing through the story, bonding with characters and experiencing said flavor happens almost exclusively in town and in personal mission voice over delivery. This means that Anthem exists in a space where each player experiences the linear storyline as the hero, while still leaving room for meaningful multiplayer.

I have particularly enjoyed the witty and clever writing combined with skilled voice actors such as Sarah Elmaleh, T.J. Ramini (gosh, Owen is just such a fantastic character and I am weak) and Rochelle Neil and many more who truly bring the game to life, even though the new format took some time to grow on me. It ended up reminding me of what I love about Mass Effect games, in fact.

I will say that it took me awhile to care about the story, because the initial onboarding experience is so poor, but I appreciate that I can engage in the story in a way that feels like a single-player experience without giving up the short, snappy play sessions with friends and even strangers.

And even if all of these points fail you, I can reassure you that you won’t find any other game out there at this point in time that will deliver as much joy of free exploring in a vast world with incredible verticality in its level design as Anthem.

The game’s rocky launch and ongoing issues helped to hide one of its best selling points: There isn’t anything else like it on the market.