Role-playing games offer a very tempting promise: the ability to step into a new world and, through my choices, forever change it. The Outer Worlds starts with my character emerging from cryostasis into a mega-capitalist hellscape but, by the end of the game, I can tear the corporations down, if I choose to.

Disco Elysium is another choice-based RPG, full of branching stories and decisions. Some of those choices are small: do I lick the evidence? Do I lick it a little? Or do I lick it a lot? Other choices help define my relationship to my partner, Kim Kitsuragi, as well as to my past, my beliefs, and my understanding of the game’s conclusion.

However, there are lots of things that are completely outside of my control. The world will never flip on its axis due to my decisions. So much of the change I create in this world is internal, and that one design decision serves as a valuable lesson on how to make choice matter.

Because choice in games is still a mostly unsolved problem, and to describe why it may be helpful to go back to a classic. 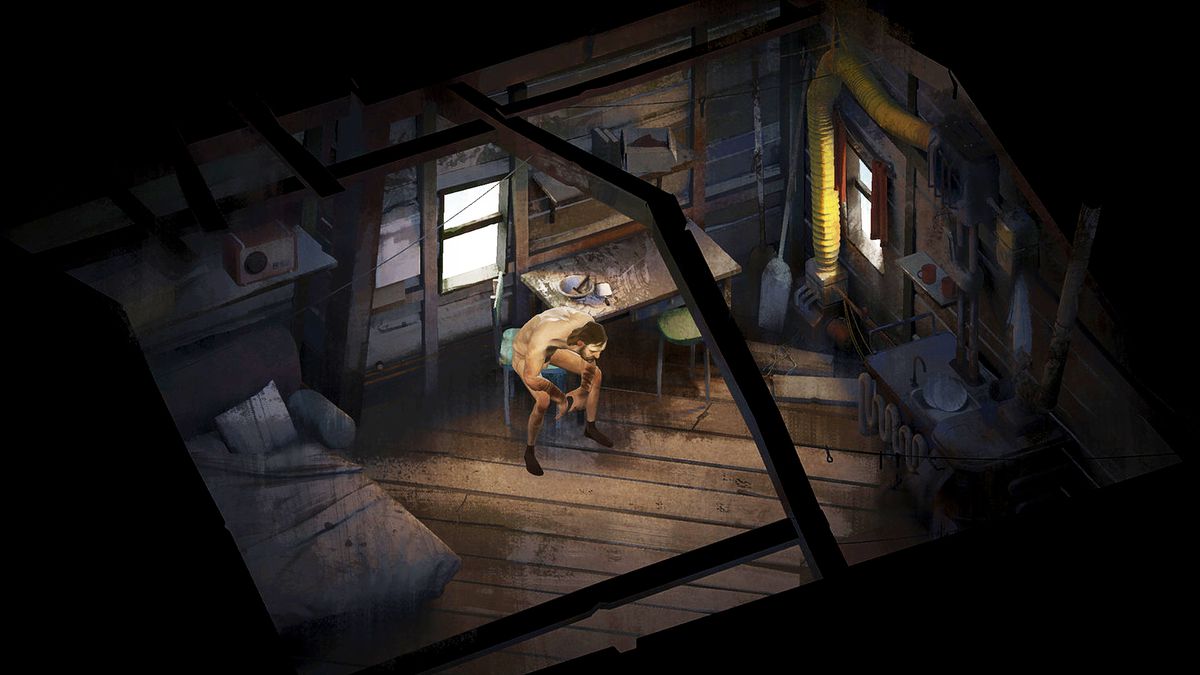 Looking back at Shepard

In the first Mass Effect, it’s possible for Shepard to talk at length with crewmate Ashley about religion. Shepard can even profess that they are a Christian during these conversations, or maybe just vaguely religious. Then, at the beginning of Mass Effect 2, Shepard dies. They get better, thanks to the nefariously named Lazarus Project, but they still died. They never brings their faith up again in any context; it’s not important, compared to the mammoth AI threats coming to devour the galaxy.

The Mass Effect trilogy is a set of games all about choices, but those choices were rarely internal. I chose whether civilizations lived or died, but Shepard was largely the same person at the end of each game. The world changed, but they didn’t. They never had to.

And the choices I made that were supposed to be important, the things that felt like they carried weight, rarely ended up doing much of anything to change the status quo. I let the Council die at the end of Mass Effect — but a very similar looking set of Council members popped back up. At the end of Mass Effect 2, I once chose to let Cerberus claim the Collector base. That added a few lines of dialogue, but little else. Even when the universe changes, it’s hard to know, from a single point of view. Everything continues on pretty much the same way.

This doesn’t mean the Mass Effect trilogy are bad games — they’re ambitious, with tons of fantastic, shocking, and sometimes emotional moments. But the big pillar of “player choice” felt like an illusion, and it culminated with the infamous series finale of Shepard facing down three color-themed choices. Video game designers still struggle with player agency that matters, instead of presenting power as a series of coded “do you want to be good, or bad?” choices that can be mostly aesthetic.

Shepard is one of gaming’s best characters, but they’re a case study about how difficult it is to make choice actually matter in a game.

So let’s talk about Disco Elysium, and how its developers side-stepped this problem. 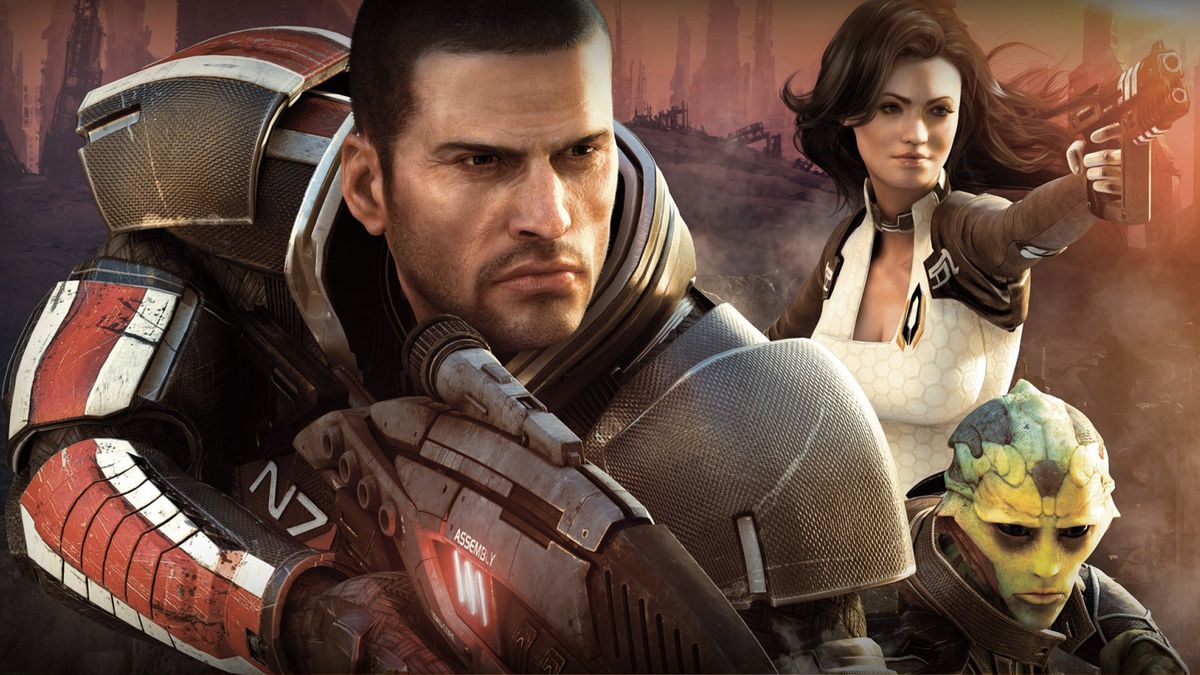 Disco Elysium, by contrast, doesn’t put players in the shoes of a secret agent space wizard. Instead, the protagonist is extremely fallible. I’ve just woken up from a three day bender, I have to focus on getting dressed, and I can’t remember a whole lot about my life. Or the world. Or anything, really. That’s how the game begins. I’d be lucky to get a bagel in the morning under those conditions, much less decide if a whole planet should be blown up or spared.

Elysium’s story is much humbler, with lower stakes than a giant pre-apocalyptic space opera. I’m dealing with one dead body and one strange city in an urban fantasy setting. Yet Disco Elysium’s mechanics are all about choice.

There are stat checks, of course — strength or intelligence determine whether I can punch a kid or figure out a puzzle. But then there are ideas. Am I a feminist? A communist? A rock star looking for a stage to perform on, or a hobo who’s happiest in a cardboard box? The only way I can think about becoming these things is to act in a way that would make the concept occur to the character.

This leads to a richer tapestry of choice, because I’m not changing, say, the person who runs the government or who has access to a superweapon. The game is following what I do, and if I treat workers well, or witness their plight, it might suggest that hey, maybe it would be worthwhile if they seized the means of production. This doesn’t mean I can help them do so, but it does mean I came to the conclusion that communism isn’t the worst idea based on my own actions and experiences. 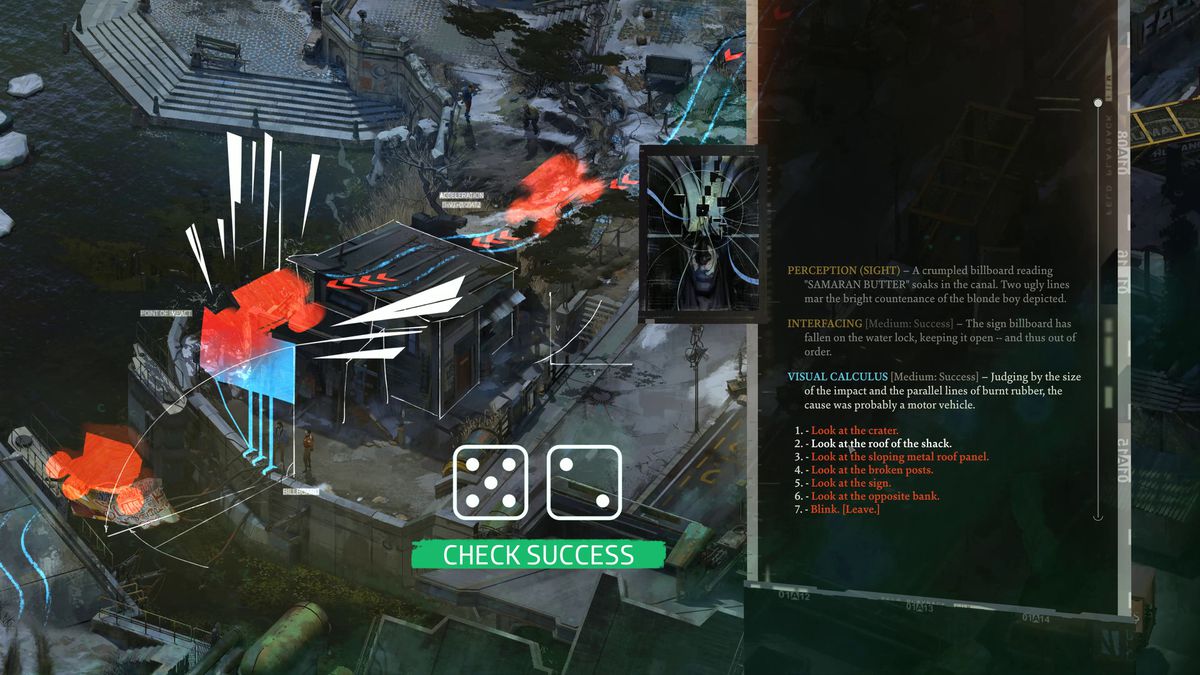 But we can also compare Disco Elysium to many Telltale Games. Have you ever played through a Telltale Game, picking every possible choice to see how much your choices change the story? It’s a good way to break the illusion that the game is setting up; you always return to the same touchstones. The more you repeat the same process, the easier it is to see how the sausage is made.

Disco Elysium always follows along the same path, but so much of the change happens inside my detective’s head. What do I think about other characters? How do I feel about my new set of circumstances? Do I trust my partner to take a risky shot? Do I empathize with the terrible child throwing rocks at a body, or take a swing at him?

All of these choices change my protagonist, especially because so much of the dialogue is internal. Anxiety, alarm, philosophy, and different approaches to problems all argue inside my protagonist’s skull, making a noisy mess that feels real.

Disco Elysium isn’t really about the dead body, not really. It’s about my protagonist and his evolution, and I don’t have a chance to change the world. I also don’t have the option to not change myself, and those changes matter. They give me new options, or take away options I may have gotten used to. I may see the same world very differently depending on what I do, and how my character begins to think about what he witnesses.

And internal change, it turns out, may not be easy to show in a game in a way that’s meaningful, but unlike the massive shifts that were supposed to happen in Mass Effect, at least they seem to be possible at all.