Star Wars: Battlefront 2 didn’t age as well as I had thought it did. What I remember as chaotic scenes of blaster fire are now revealed to be smooth landscapes filled with simplistic AI. Previously thrilling space battles are rote exercises in destroying the same weak points against the same backgrounds, time and time again. “Heroes” are slippery creatures with underwhelming abilities whose sense of power was projected by my young mind’s amazement at being Luke Skywalker.

I’m not the only one playing the original Star Wars: Battlefront 2 in 2019. A recent Games with Gold promotion brought the game into the digital libraries of every Xbox Live subscriber. Battlefront 2 seems to keep finding ways to reach new audiences, whether that’s the backwards compatibility of Xbox One, or GOG updating the PC version with online server support. Unlike other games I’ve written about for Polygon, I’m not discovering an underrated game from the past. But I am taking off my own rose-tinted glasses and finding something far more interesting than an undisputed classic.

Star Wars: Battlefront 2, flawed though it may be, gave its players a taste of the future as resilient as the game itself, and it’s all thanks to the Galactic Conquest mode.

How to compete (when you don’t have the time)

It’s important to recognize the context surrounding the development of Star Wars: Battlefront 2. The first few releases by its developer, Pandemic Studios, features prominent real-time strategy elements near the twilight of the genre’s heyday in the early 2000s. That and, uh, the baseball game Triple Play 2002.

Pandemic then launches Star Wars: The Clone Wars in 2002, which is a vehicle-based licensed tie-in that puts players right in the heart of the action. The studio wouldn’t release another game until 2004, but the results are stunning when they do.

Full Spectrum Warrior, the original Star Wars: Battlefront, Mercenaries: Playground of Destruction, and Destroy All Humans! were all released between the beginning of 2004 and the end of 2005, and each one is special in its own way. Battlefront 2 itself is released a mere 14 months after the first, in November of 2005. 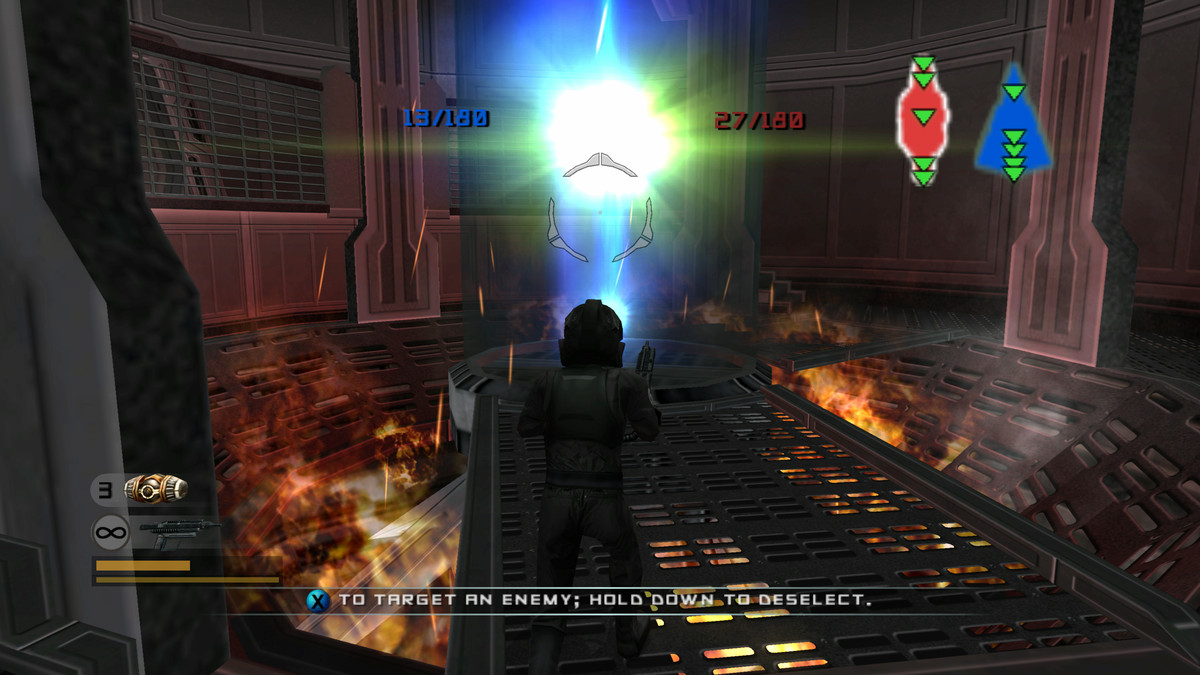 A sub-14-month development cycle is absurd for a game of this scale, even without considering issues with releasing post-launch updates on console at the time, the physical sales pipelines, or the need to press a master disc well before the release date (on top of the other factors).

Given this perspective, the design of the original Galactic Conquest mode for the first Battlefront and its update in the second seems like necessity as much as genius. How are you supposed to compete when you have so little time, and single-player campaigns of all shapes and sizes dominate the landscape? You have all of these Star Wars assets, but how do you make a replayable experience outside of the nascent online multiplayer community that was only beginning to grow on console?

Galactic Conquest is the answer to all those questions.

A theater stage, not a sandbox 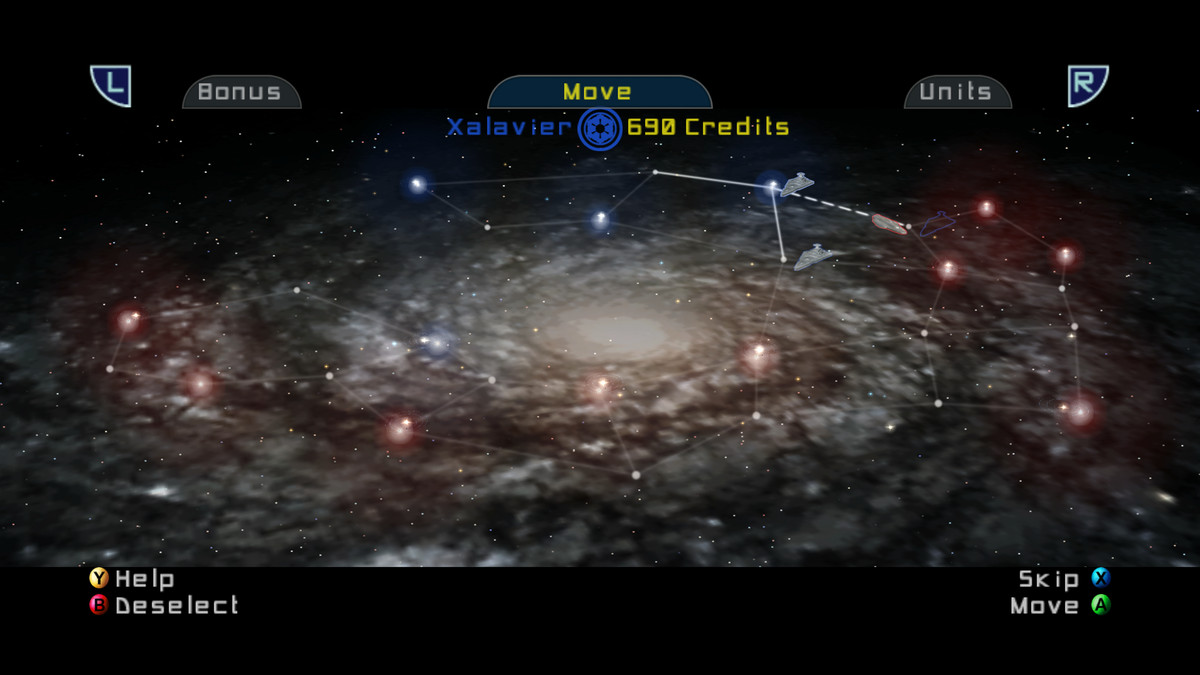 The galaxy map of Galactic Conquest.

Galactic Conquest is a turn-based, modular campaign mode. I choose a scenario set in a significant era of Star Wars conflict and drop into a star map occupied by two factions. Both factions have one, or several, capital ships they can move around the map, as well as a number of planets they currently control. Controlling a planet gives me a certain number of credits each turn, which can then be spent on temporary battle bonuses — like regenerating health — constructing a new fleet, and buying new unit types for my army’s permanent use.

I can move one capital ship in a turn, which initially feels restrictive. Reaching a single enemy planet could take three turns or more, depending on my route. Three turns in which nothing ostensibly happens, as I slowly move my proxy from one place to another.

But then I have a realization: The emptiness has a purpose. Something is happening.

Galactic Conquest is a context-generation machine. I’m not playing as an army, or even a commander. I’m playing as the march of war itself. Inevitable, trudging war, which switches from drawing battle lines across the stars to personally thumping blaster fire into Kashyyyk defenses in a moment.

A planet I leave open to attack on the razor’s edge of neutral space transforms into bait — the first step in a brilliant tactical feint. A set of white nodes that happen to be occupied by my ships turns into a blockade. Buying a bonus that drastically reduces the integrity of enemy vehicles while my forces desperately need ground support makes perfect sense, because the next time I meet my enemy I plan to do so in space. 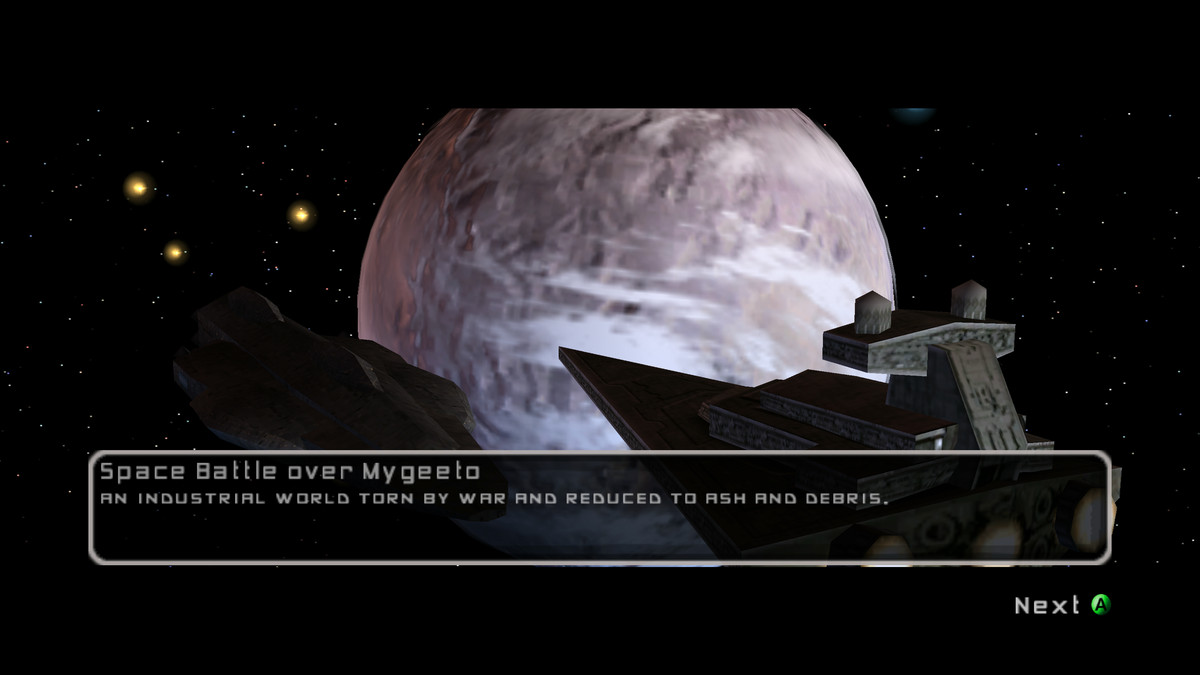 Descriptions of each planet are kept to basic details.

Play transitions to a typical battle view when I reach an enemy planet or encounter another capital ship. Whether in space or on the ground, me and my AI companions attempt to complete objectives under shifting circumstances, both sides deploying bonuses in a competition for survival.

The scale of these conflicts doesn’t quite compare to those in my memories, but the tangible, instantly understandable consequences remind me why I love the game. A single battle results in a divvying of credits that impacts my continued strategic moves on a galactic level. Losing a fleet is crippling, because a capital ship is a defensive measure as well as an offensive one. They are both threat and promise fulfilled.

What separates this from a typical campaign is the sheer amount of potential content left aside. My role as the Actual Embodiment of War only needs the barest of scaffolding to work effectively — any more than that strangles the conceit.

Planets get one-line descriptions, as do soldiers and bonuses. The starting point of my chosen scenario is given a 15-second explanation that frames the conflict, and I’m conveniently left alone for my remaining hours on the map.

Think of the mode as a stage more than a sandbox; you get a background, a box of props, some costumes, a crowd of panicked extras, and a piece of paper that says “Disney owns all of your intellectual property going forward.” Instant fun! 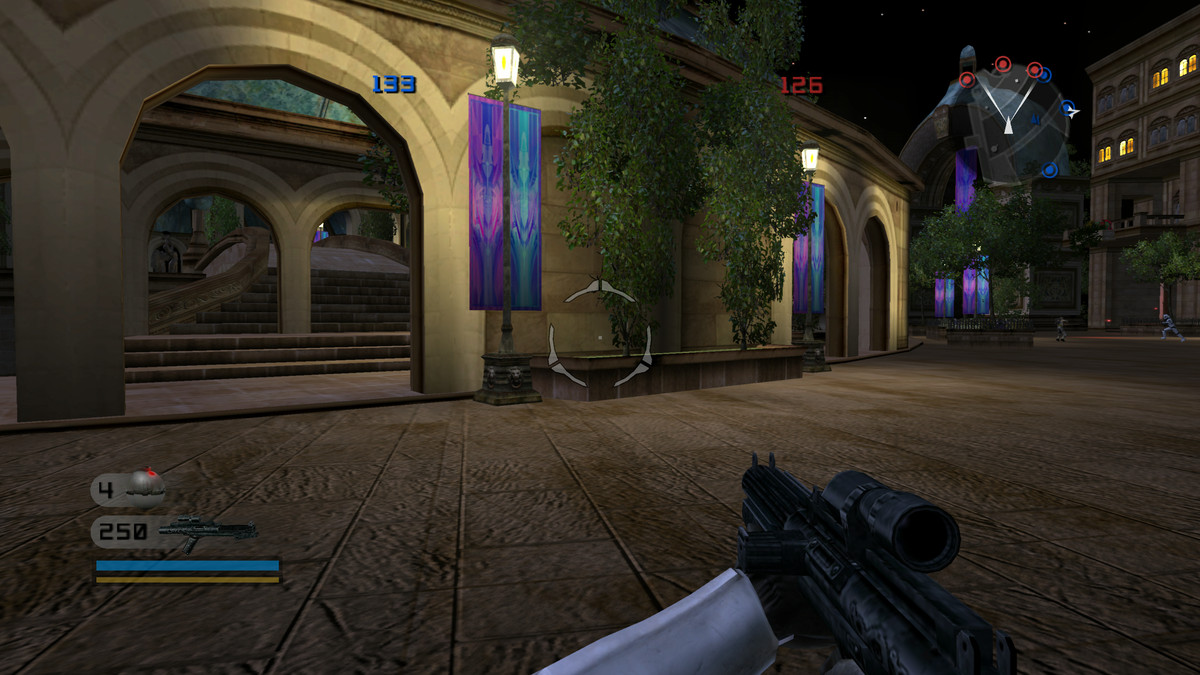 As a game developer, I can’t emphasize enough how brilliant of a production gain this mode represents. A replayable game within a game, built almost entirely from existing assets without feeling cheap or repetitive? It’s a virtual miracle, not least of all because of the time in which it arrived.

Fidelity has an escalating, exponential cost that touches every part of a title. A dissonance emerges if I increase the detail of my 3D art, but the animation remains at a certain level. Making some dialogue options in a choice-based game arbitrarily inconsequential compared to others begs certain questions that, if I don’t have justifications, can invoke resentment.

I genuinely don’t know what Galactic Conquest would look like today. However, I am fairly certain that the basic template presented by Battlefront 2 in 2005 would feel jarring if shoved wholesale into the 4K detail of its modern incarnation. The original makes the best of what it has, which is part of why it’s so special.

The developers of the Galactic Conquest mode looked forward, creating something that exists and is enhanced by its own limitations, intentionally or not. In the process, they also set a standard many other games now follow.

Modular, structured game experiences outside of the typical level-and-cutscene concept are becoming quite common in AAA titles. Dragon Ball FighterZ has a campaign mode with a series of node-based strategic map battles given a context in the multiverse. Ditto for the Super Smash Brothers Ultimate “World of Light” campaign, which substitutes single maps for a sprawling isometric world, and replaces bacta tank bonuses with the harvested spirits of beloved characters. Call of Duty: Infinite Warfare applies its AAA bombast to its own modular galactic campaign filled with optional content, bonuses, and storytelling moments.

I can call on a small army of growing examples that use a mixture of unique content and repeatable structure to drive emergent single-player content, with Battlefront 2 as an early entry among them. In certain respects, with its short-form runs and permanent consequences, you can even see Galactic Conquest as a roguelite, which is yet another common genre today.

I wouldn’t lay the development of these genres and modes at the feet of Star Wars: Battlefront 2, however. Each game approaches this challenge differently, and the umbrella of what constitutes a modular or replayable campaign is too wide to note a single inspiration for all of them.

Regardless, what Pandemic accomplished still resonates today. Emergent storytelling, playable fanfic maker, and production-friendly content generation all in one delicious licensed package, there hasn’t been anything exactly like Galactic Conquest since. It’s easy to see why people remember the mode so fondly.

They got a taste of the future in 2005, and they want that feeling back.