When it first came out in 1999, I played a lot of Age of Empires 2. Its blend of historical real-time strategy, with detailed rock-paper-scissors military unit management made it one of my favorite games of all time. I love the rhythm of having my villagers collect resources while I improve the village’s defenses, build and upgrade its soldiery, and ultimately launch invasions of my enemies.

So when an updated HD version came out in 2013, I gave it a try. I was disappointed. Although it was a decent update, which offered a lot of modding tools and a general visual improvement, it didn’t catch my imagination. It was, in essence, a nostalgia play.

A new version, called Age of Empires 2: Definitive Edition, has captivated me entirely. Developer Forgotten Empires and Xbox Game Studios have done a fantastic job of taking a 20-year-old game and making it feel fresh. Although it’s really the same game, the Definitive Edition has made enough changes to make it feel like new, especially while we wait for Age of Empires 4 to arrive.

Age of Empires 2: Definitive Edition looks better than ever before, with support for 4K resolution. It has a richer color palette, better lighting, and a host of redesigned units and buildings. I’m especially taken by the way buildings crumble to the ground when they finally succumb to siege. The ability to zoom in on the action is nicely implemented.

Music and voice acting have also been updated, giving the game a more grandiose feeling, especially during the campaigns, which are heavily narrated.

All the old campaigns have been included, with updates, as well as a new campaign based on the waning days of the Khanate. This includes four new civilizations and three story campaigns that offer a rewarding challenge.

In one new campaign, there’s a timed challenge that pits Tamerlane (aka Timur) against the heavily fortified city of Delhi. It’s reasonably easy to use catapults to get past the outer walls, but the city’s cramped streets are heavily defended by war elephants. Unit management becomes more difficult as the enemy takes out my seriously vulnerable bombardment units, leaving me unable to destroy the city’s last citadel. As I say, it’s a nicely designed challenge.

New game modes have also been added, including one called Empire Wars, which drops the player into a town with a ready-made population of villagers, all busily collecting a balanced portfolio of food, wood, gold, and stone. This takes the chores out of the early game, for those who tire of such things.

Each building in Age of Empires games builds multiple types of units. Stables, for example, can build light cavalry, heavy cavalry, scouts, camel riders, and more. In the past, I could only queue up one type at a time — say, 10 knights — and then go back and queue up the next desired units. Now I can queue in any order. It’s nice to create archers and spearmen alternatively, so that I have a more balanced ranged army right from its creation. 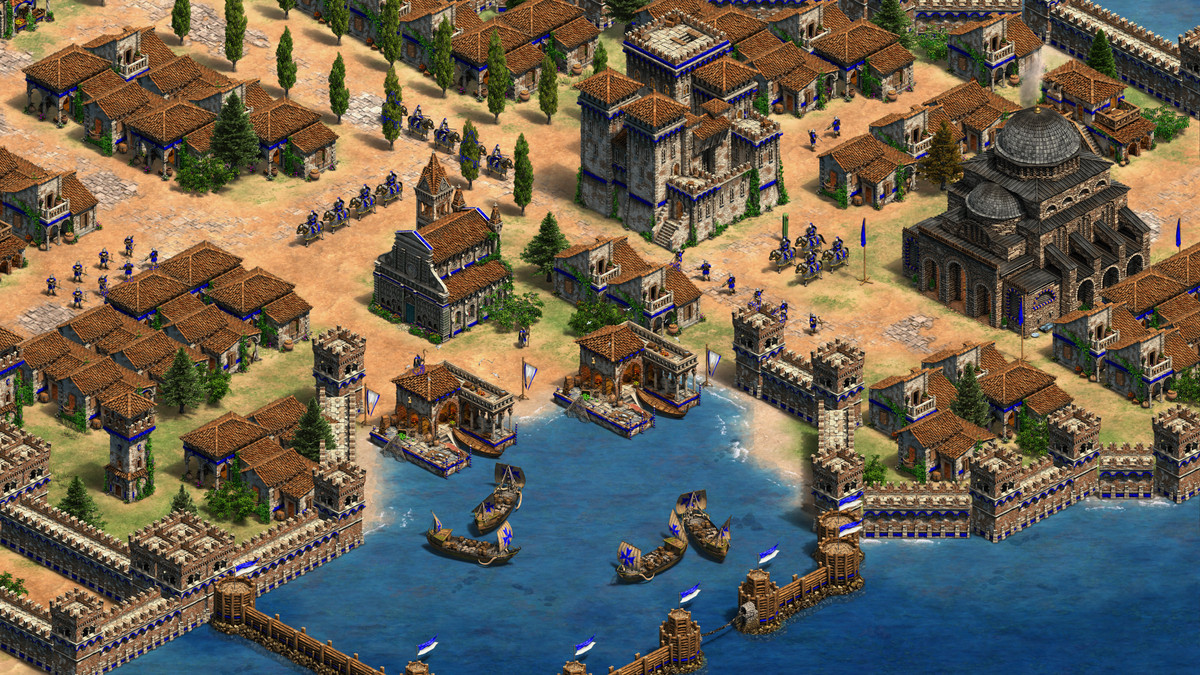 Civilians can also be instructed to construct certain buildings in a particular order. So, I can direct them to build a network of, say, towers, a gate, and defensive houses, and leave them to complete the job.

The most useful change is the ability to automatically reseed farms. In the old games, exhausted farms had to be relaid manually, which was a nuisance in the middle of a frenzied campaign. Unwary players could find themselves bereft of food, one of the game’s four essential resources. Now, I can stack up a lot of wood, and order multiple auto-reseeds that leave me free to ignore this tiresome chore, especially late in the game. The same goes for fish traps.

These useful changes show that Forgotten Empires and Microsoft have paid attention to the kinds of “quality of life” improvements rival games have made, and that strategy players now expect.

Playing online is a totally different experience than playing computer-controlled opponents, almost to the point of being a different game. There’s a bunch of hard lessons to learn about common strategies. Now, the transition from AI to human enemies is eased with a specific tutorial called Art of War, that can save a lot of dismal defeats online.

The transition to playing real humans is now much smoother. Online play has also seen a lot of user interface improvements as well as a switch to server-based contests.

In single-player mode, the game’s AI has been spruced up. Perhaps it’s this change that I like the most or, to put it another way, it was the AI’s limitations that I liked the least in the 2013 re-release of Age of Empires 2. Path-finding is much better too; units generally go where I want them to go. AI enemies are less likely to feel like they’re cheating, or worse, to behave self-destructively.

AI has come a long way in the last two decades, and Definitive Edition’s improvements in this area really show. On the whole, this is an excellent update which I believe will please lapsed players looking to return to an old favorite, as well as new players who are curious about a genuine classic.