It wasn’t until I’d made my first tool, a sharpened stick, by stripping the dried twigs from a branch, and inspected it curiously that I would start to grasp what Ancestors: The Humankind Odyssey was going for. The new adventure game from Panache Digital, the studio founded by former Assassin’s Creed lead Patrice Désilets, is supposed to be about surviving with nothing but your own two hands.

Just prior to unguided hands-on time with Ancestors — Désilets urged us to jump into the experience ourselves without much of an introduction — I’d watched the studio’s founder swing through jungle treetops, gathering food, and deftly avoiding threats from competing wildlife. There didn’t see to be much there there. But he was surviving, growing, and eventually evolving.

That’s what Ancestors: The Humankind Odyssey is about: shepherding a species, the ape, through millions of years of evolution. Maybe I’ll make it as an ape, all the way to Australopithecus afarensis, through rapid evolution and cautious migration. Or maybe, 10 minutes into the game, I’ll miss the landing on a daring swing, fall to the ground, snap my leg, and be attacked by a deadly viper, as I did during in my initial playthrough. I can always start over and try again. 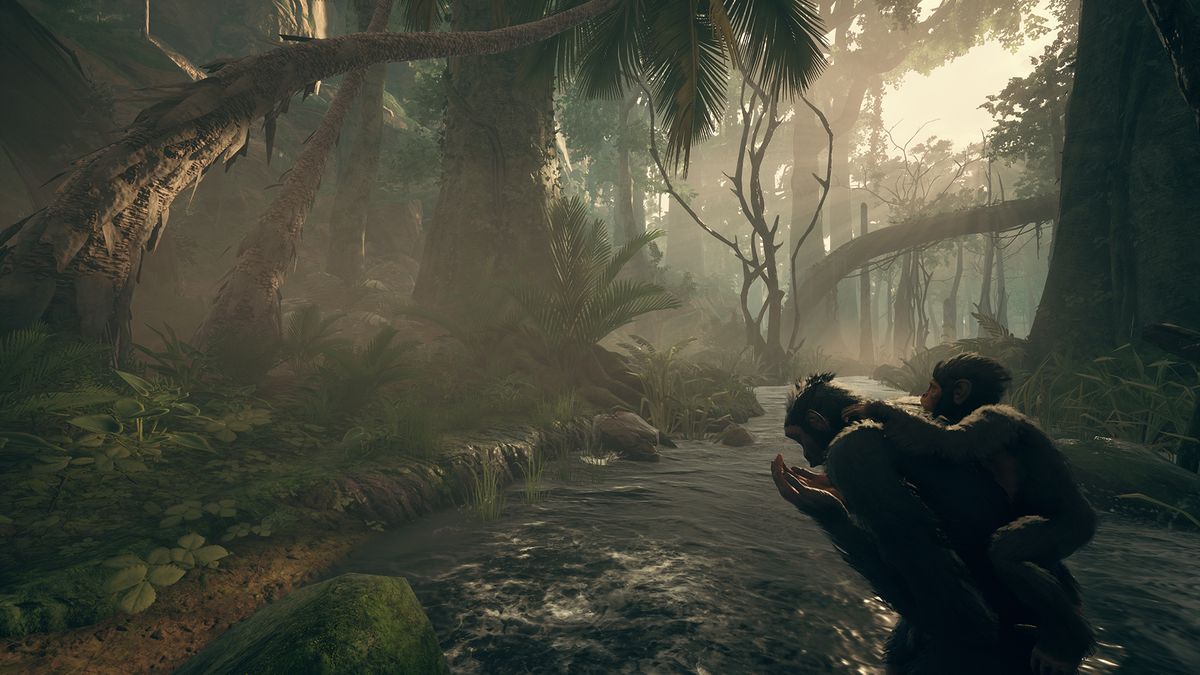 An ape drinks from a river
Panache Digital Games

Ancestors is survival in its most basic forms. As my ape, I need to eat, sleep, and drink water. But I also need to protect my fellow apes. One of my early tutorial tasks is to recover a mewling baby ape abandoned in the forest after its mother was killed.

I need to learn to communicate with other apes better. I can form bonds. I can groom my friends. I need to learn how to use tools, make a bed of fronds for my ape to sleep on, and learn what’s safe to eat and what’s not. Some of that is done through simple exploration and experimentation. I can eat berries and I’m fine. I can eat an egg, but might get sick from it, because my ape doesn’t yet have the enzyme to properly digest it.

I need to explore, especially as food and resources near my living area begin to dwindle. I can learn to stand upright. Then I can stand upright for longer. But I shouldn’t venture too far out into the unknown, where fear of unfamiliar surroundings could deteriorate into hysteria.

As I learn, studying my environment and developing my senses, I can evolve how I want. While Ancestors is mostly free from intrusive menus or an ever-present HUD, you will dive into your ape’s brain to grow and evolve it. After performing certain actions, like eating new types of food, using my senses to process new sights and sounds, and experimenting with tools, I could grow and expand my ape’s neurons, forming new connections. That opened up new and improved skills, which would lead to more evolution and traits I could pass down to future generations.

Looking out into the game’s world, it’s clear there is so much to learn. Things that are unknown in the world are stylized with a dark gray smoke and fierce glowing eyes, but I can go up to them and learn about them. Deadlier threats, like poisonous snakes and tigers, await me in the wild, and I need to identify them by sight and sound. 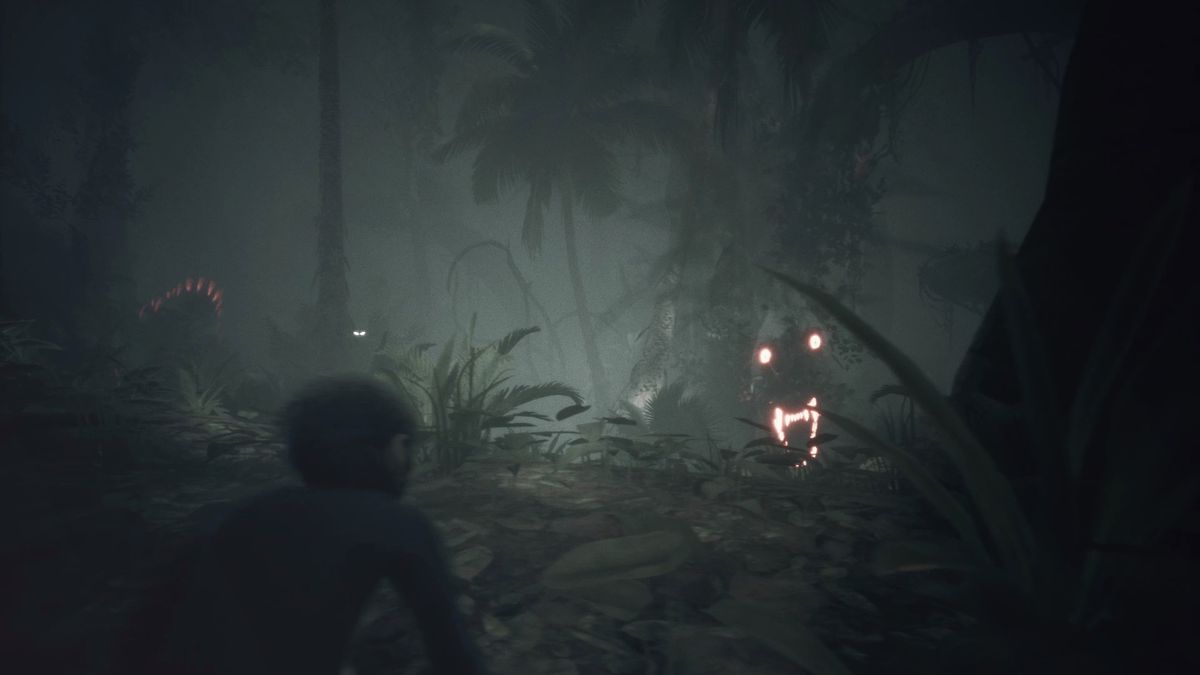 Fear manifests in the jungle of Ancestors
Panache Digital Games

Ancestors is not built around a structured narrative. Désilets wants players to form their own fiction. In one example he outlined, maybe the end of a player’s game is when two elders successfully bring the colony’s last remaining baby to a safe and fertile land, joining a group of outsiders, where the final stages of evolution can occur. Another story may be something of a speedrun of protohuman evolution as we know it. Ancestors openly challenges you from its very beginning to evolve faster than our own real-life ancestors ever could.

More than that, Désilets said he wants players to experience stories they might not have ever considered to be human stories. In an interview, Désilets pondered what it must have been like for the first human being to milk its first cow, and what desperation or ingenuity might have led to that decision. And since the crafting involved in Ancestors is done with your own two hands, moments like that, making do and surviving with no inventory, no magical items, just the basics of survival, will offer some insight into our unrecorded history.

Players will also have the opportunity to experience alternate stories of human evolution. A hardcore survival mode, where your ape is dropped into an environment harsher than the bountiful jungle of the main game — say the middle of a desert — will also be available. There, you will fight to survive. 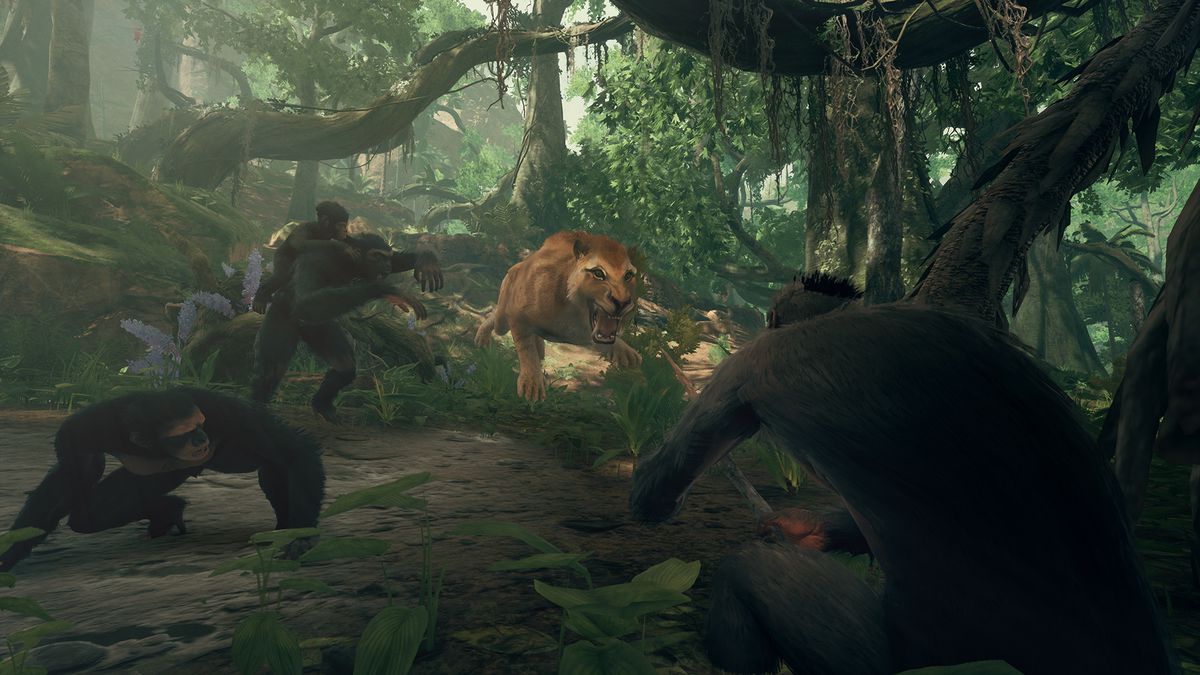 Ancestors: The Humankind Odyssey is just volume one of a three-part story that Désilets and Panache Digital hope to tell. Future volumes, they hope, will be closer to human stories, but the full story of humankind was too big for just one game, Désilets said. We’ll get to evolve, basically, to the point of “Lucy” in volume one.

The first step in that journey launches later this year. Ancestors: The Humankind Odyssey will be available for PlayStation 4, Windows PC, and Xbox One for $39.99.