Arcane’s Vi is a beautiful character. She’s bold, courageous, conflicted, and caring in a way that only the best fictional personalities are. The Netflix show reinvents her League of Legends persona and morphs it into something more nuanced, a deeper examination of her upbringing that isn’t afraid to delve into how trauma can define who we are and how we decide to approach certain moments in life. Vi and Caitlyn Kiramman have become fan favourites of the animated adaptation, their romantic relationship resulting in an avalanche of fan art and general adoration because they go so well together.

I’ve harped on about the sapphic brilliance of Arcane a handful of times now, and for good reason, but today I want to look at how Vi’s character reflects that of another animated lesbian – Catra from She-Ra and the Princesses of Power. Both characters are intense, like they’re trying to accommodate for a lack of vulnerability or unwillingness to admit the rather simple things that are eating away at them. Vi and Catra were brought up in environments that would threaten to swallow them up if they failed to defend themselves, Undercity and the Horde filled with undesirables who would happily abuse those who let their weaknesses show. They had to be strong, both for themselves and those around them.

Related: It's Been Five Years And Final Fantasy 15 Still Sucks

This hardens people, making them grow distrustful and violent, only opening up to a select few people in their lives who they’ve spent years growing close to. Catra has Adora, a childhood friend she harboured feelings for long before she became a buff magical princess and left her behind, planting a seed of resentment that would inevitably lead to her downfall. Our self-destructive cat girl was left alone to her own vices, growing more and more erratic as the things that once kept her afloat now doomed her to drown. It’s a heartbreaking character arc that concludes in her reuniting with Adora and finally cementing the love she’s held for so long, but the journey to reach this point was lined with death and tragedy.

Vi finds herself having to make similarly difficult choices. Arcane’s opening act has Powder igniting a bomb that kills their childhood friends in a misguided attempt to save her sister’s life, tearing them apart in a separation enabled by reactions brought upon by sudden grief. Vi refuses to save her sister and walks away, allowing her to be taken in by Silco and morphed into a twisted woman groomed by death, violence, and subterfuge. When they finally reunite, Powder has become Jinx, demonising Vi for leaving her behind, her mind indoctrinated by forces greater than she could ever comprehend. She’s told that the only family she had left decided to throw them aside because she didn’t love her anymore.

Yet deep down, a familial love remains, Jinx believing that, even if she did everything to push Vi away, she would still come to save her when it really mattered – and she does, but this bond is abused and torn to pieces again and again until Jinx does the unthinkable. Vi tries to salvage things, desperately struggling to make her sister see reason to save each of them from oblivion. It doesn’t work, the show concluding with Jinx firing a missile into the council chamber to bring down the very foundations of her lifelong oppression. Such actions will have untold consequences, and now Vi, Jinx, and Caitlyn must deal with the aftermath. 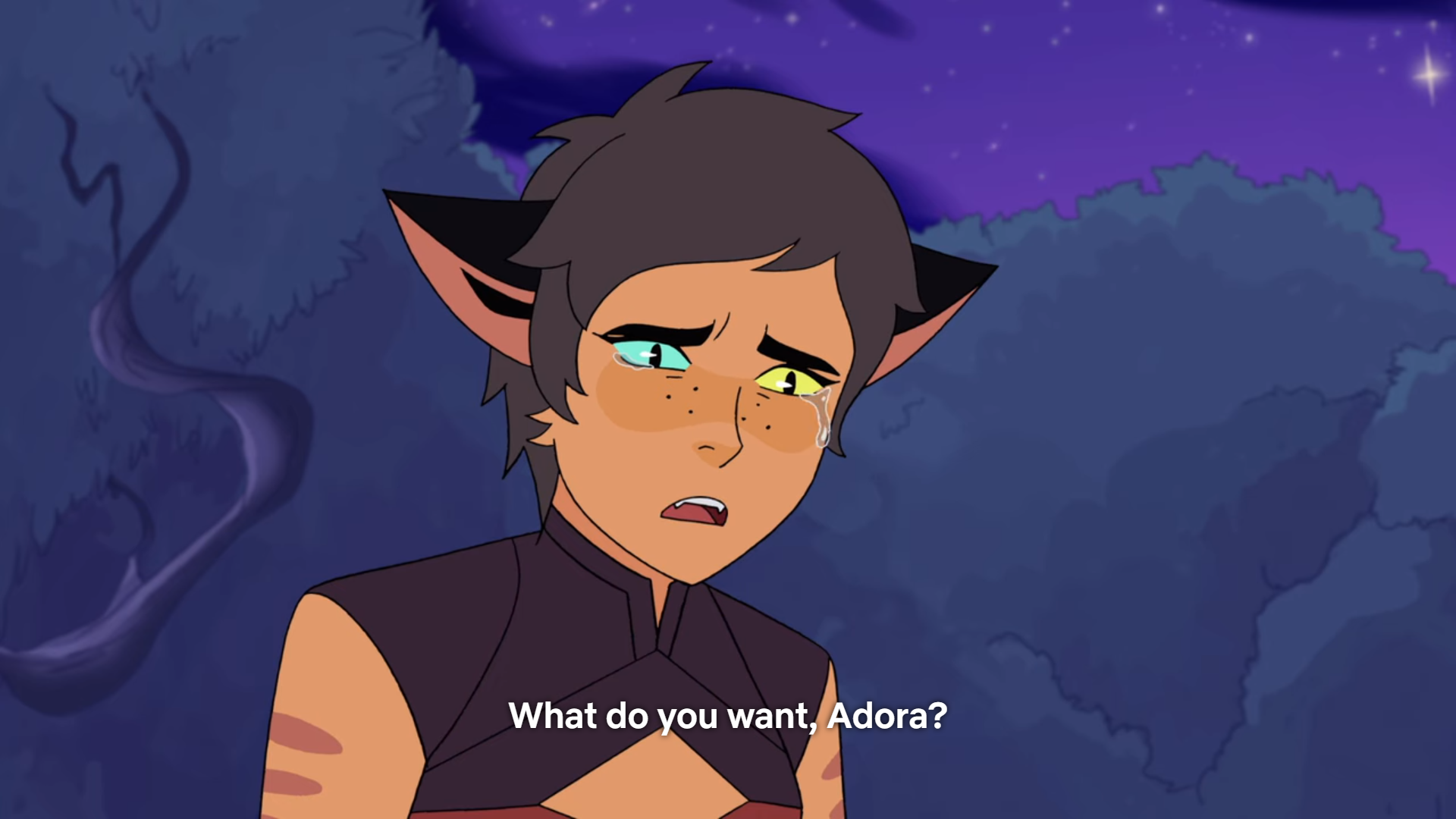 Vi and Jinx fail one another, much like Catra and Adora do – going their separate ways until life pulls them apart before inevitably bringing them back together. League of Legends lore dictates that Vi will eventually become an Enforcer in the city of Piltover, fighting for the good of its people instead of lingering in the dangerous streets of Zaun. She works alongside Caitlyn, who in the game is referred to as her partner, which we know has explicit romantic connotations. Just a couple of girlfriends fighting for justice, nothing to see here.

As you’d expect, Vi’s sexuality and attitude towards women is one of the biggest comparisons between her and Catra. They are both total bottoms, and hide this fact with a smug sense of superiority through how they speak and carry themselves, only to melt the second Adora and Caitlyn get them behind closed doors. When fliration first begins to emerge between Vi and Caitlyn, it’s the former who makes her tall and lanky enforcer all flustered, asking if she’s attracted to men or women as she prances off with a confident smirk on her face. Turns out her gaydar was way off and Caitlyn absolutely swings that way.

Moments of brashness are juxtaposed with tender interactions, with Vi and Caitlyn laying in bed together as they pour their hearts out and exchange loving touches, finding a brief window of solace in a society so determined to tear them apart. It’s like how Catra and Adora used to stay up all night gossiping in the Horde, happiness mined from the little things regardless of their existence’s perpetual misery. They can’t see the world, so they seek to find equivalent value in one another, and seeing that eventually result in happiness still warms my heart. I’m very sorry, I am the most hopeless romantic in the entire universe.

These relationships are built on adversity, intimacy forming from abject trauma and a desire to belong somewhere you aren’t ostracised for simply being who you want to be. Vi and Catra are both characters who defy the male gaze that has dominated media for so long, queer characters who are undeniably that, confident in their own attraction and personality while seeking out relationships that aren’t framed in a heteronormative way. I love both of these characters, which is both an example of my perfect taste, and how heroines are becoming infinitely more complicated, possessing stories that can be picked apart and examined as we come to admire and relate to them in countless different ways. Vi and Catra could probably use some therapy though…