Most dungeon-crawlers introduce fierce warriors who can mow down enemies with ease for noble reasons. Children of Morta, an upcoming roguelite from developer Dead Mage, brings a very different approach to the genre by offering a selection of playable family members who, at first glance, may not look like mighty heroes at all.

“It’s a game about love, friendship, and supporting each other,” Grzeszczuk says. “But also anger that comes from grief and loss.”

You play as a family of six made up of parental figures, relatives, and siblings. However, don’t be fooled – the family dynamic doesn’t make this story any less sinister and it doesn’t make its heroes any less daring. Before each run, you select which family members to play as (through single-player or co-op). The gameplay has a hack ‘n slash vibe, where you conquer overwhelming swarms of enemies through ranged or close combat as well as explore the dungeons for loot.

Children of Morta tells the story of a family who must stop a growing and deadly corruption that stems from Mount Morta. You journey through three different biomes (caverns, middle-eastern inspired lands, and a steampunk world) to rescue the gods of each area to borrow their power and make your way towards Mount Morta to clear the corruption completely.

“Family is the backbone of the experience,” says 11-bit marketing director Patryk Grzeszczuk. “We’re working on making the story meaningful and to let you as a player not only understand those characters and their motivations, but also to get attached to them and invest in them.” 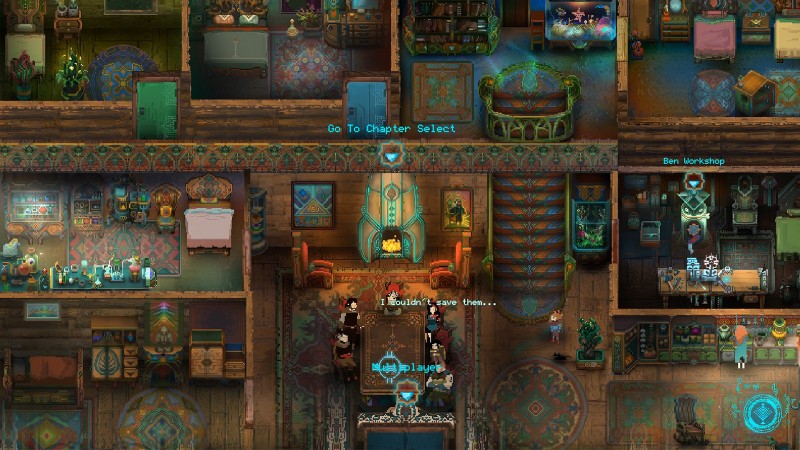 Your time is split up between dungeon runs and moments of respite at the family home. The house is where you can upgrade your gear, skills, or gain insight into the family members’ personalities in-between your travels. For example, you may see someone smoking a pipe near the bottom of the stairs, or the youngest happily sketching on papers scattered across the floor. Some family members don’t travel with you on runs and instead stay behind, like your alchemist grandmother who gives you different concoctions for your journeys, or uncle Ben who beefs up your gear.

Children of Morta’s gameplay isn’t just dependent on your reflexes; it also takes time to build your own tactics and strategy. For example, you can’t keep playing as the same character over and over again. I really enjoyed playing as Linda, a fragile-but-skilled ranged archer, but characters need rest and some handle certain dungeons or situations better than others.

“The more you play with the characters of your choice, the more they are being affected by this force, so you have to switch characters from time to time,” Grzeszczuk says. “You cannot finish the game by playing with one character only.” 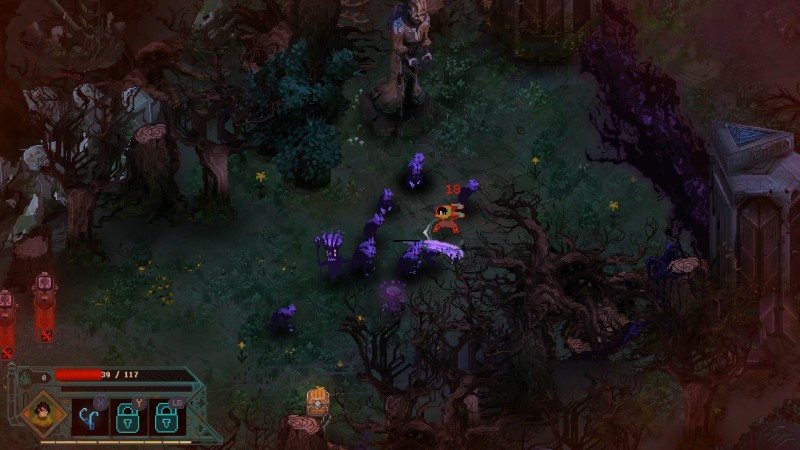 During my time with Children of Morta, I also played as the father, John, who also acts as a tank character. He wields a sword and shield and easily cuts through foes in close combat. I enjoyed playing as Linda more than I did John, mostly because her controls feel smoother. Linda is controllable with twin sticks – one for navigating and the other for aiming and shooting. While John is brutal in combat, he is more sluggish and suffers from some imprecise controls.

Unlike other roguelike and roguelites out there, Children of Morta doesn’t have permadeath and doesn’t take away any of your loot if you perish. It’s still challenging, forcing you to restart a dungeon after you die, but is more forgiving in other ways. For example, after dying inside a cave-styled dungeon, I was able to spend my accumulated funds on buying new gear at the Bergson family home.

The game does, however, have procedurally generated dungeons (and some handcrafted worlds to explore), meaning each run won’t be the same as the last. As you progress, you will have to return to some previous dungeons, but this shouldn’t be too annoying thanks to the randomization. You also may experience randomized story events that didn’t appear the first time or side quests you may have missed.

Children of Morta launches later this year for Switch, PlayStation 4, Xbox One, and PC, though no specific date has been announced. With its familial story themes and fun gameplay, I’m eager to see how it fares.