It’s hard to argue that BioWare’s history with queer representation doesn’t come from a genuine place. The studio’s writers clearly care deeply about their characters, making a point to include LGBTQ+ identities long before it became relatively uncontroversial. Because of that, it will always hold a special place in the hearts of many queer gamers. There have been hits, and there have been misses, but it doesn’t change the fact that many of the most notable LGBTQ+ characters in gaming come from either Mass Effect or Dragon Age.

However, it’s an uncomfortable fact that these creatives were once censored by BioWare bosses, stopped from expressing the true identity of their characters because it might offend Fox News. Perhaps even more uncomfortable is how this only happened in the more notable of the two series – Mass Effect. This interference in the writing process hurt the representation of all queer identities, but made its depictions of bisexuality actively damaging.

When it comes to Dragon Age, the series without as much mass market appeal in its early days, we got unapologetically queer stories. But jump over to its sci-fi sibling and bisexuality and pansexuality were made as “palatable” as possible, being confined to an all-feminine alien race or an overly familiar Yeoman for the first two entries. To make matters worse, the explanation is pretty heartbreaking: we weren’t worth the risk.

Back in 2007, Fox News sounded the alarms over some alien/human girl-on-girl action. As per our report earlier this year, decisions higher up in the company meant that queer content had to be completely cut to avoid this happening again. Jack was meant to be pansexual, and Jacob was going to hook up with male Shep. But It was decided that this series was too cool for the gays, so we had to hide away from the spotlight with Dragon Age 2. 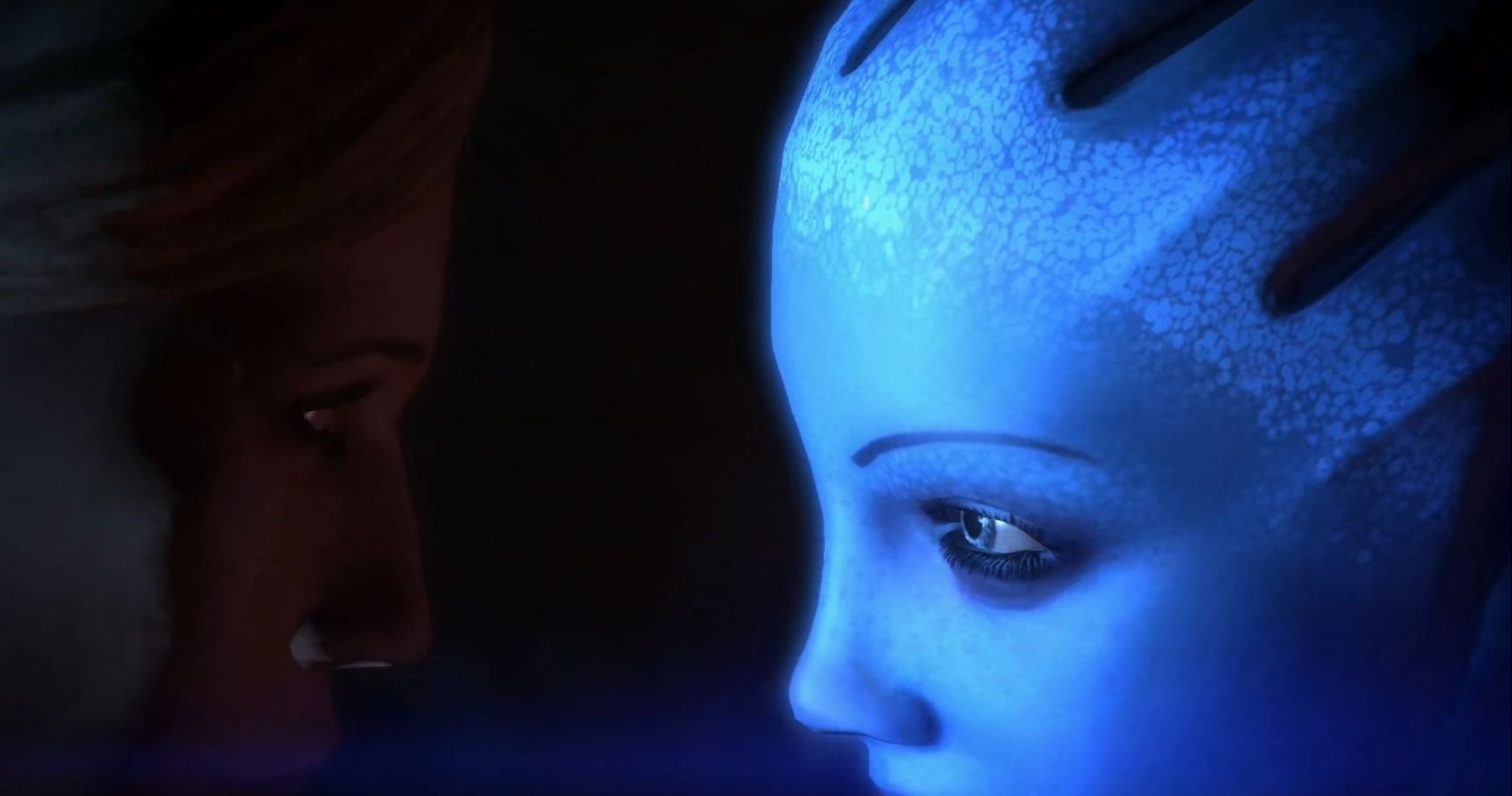 Unfortunately, making these two characters straight left a void on the Normandy, drawing more attention to the only other queer characters aboard: Kelly and Samara. The first Mass Effect only barely rocked the boat with its representation, seemingly setting things up for a bigger and better sequel. But instead we revert to drowning in lazy tropes and being completely sidelined.

Take Kelly Chambers for example. I love her, but my personal feelings won’t change the fact she was literally codenamed ensign_threesome during development. She exists to stand in one spot and be flirted with until you convince her to give you a lapdance. Obviously, there’s nothing wrong with a bi girl doing any of those things, but when that’s all we have going on, it does feed into some stereotypes and fetishistic fantasies. This all could have been avoided by having any of the other ladies of the Normandy SR-2 be queer – or hell, if we’re really brave, maybe even one of the guys.

After starting out strong in the first game, we immediately nosedived into frat house humour, or completely hidden away in Samara’s case. The unintended message from this was to make your sexuality crowd-pleasing, or keep it quiet. The straight crewmates got much more variety and nuance. 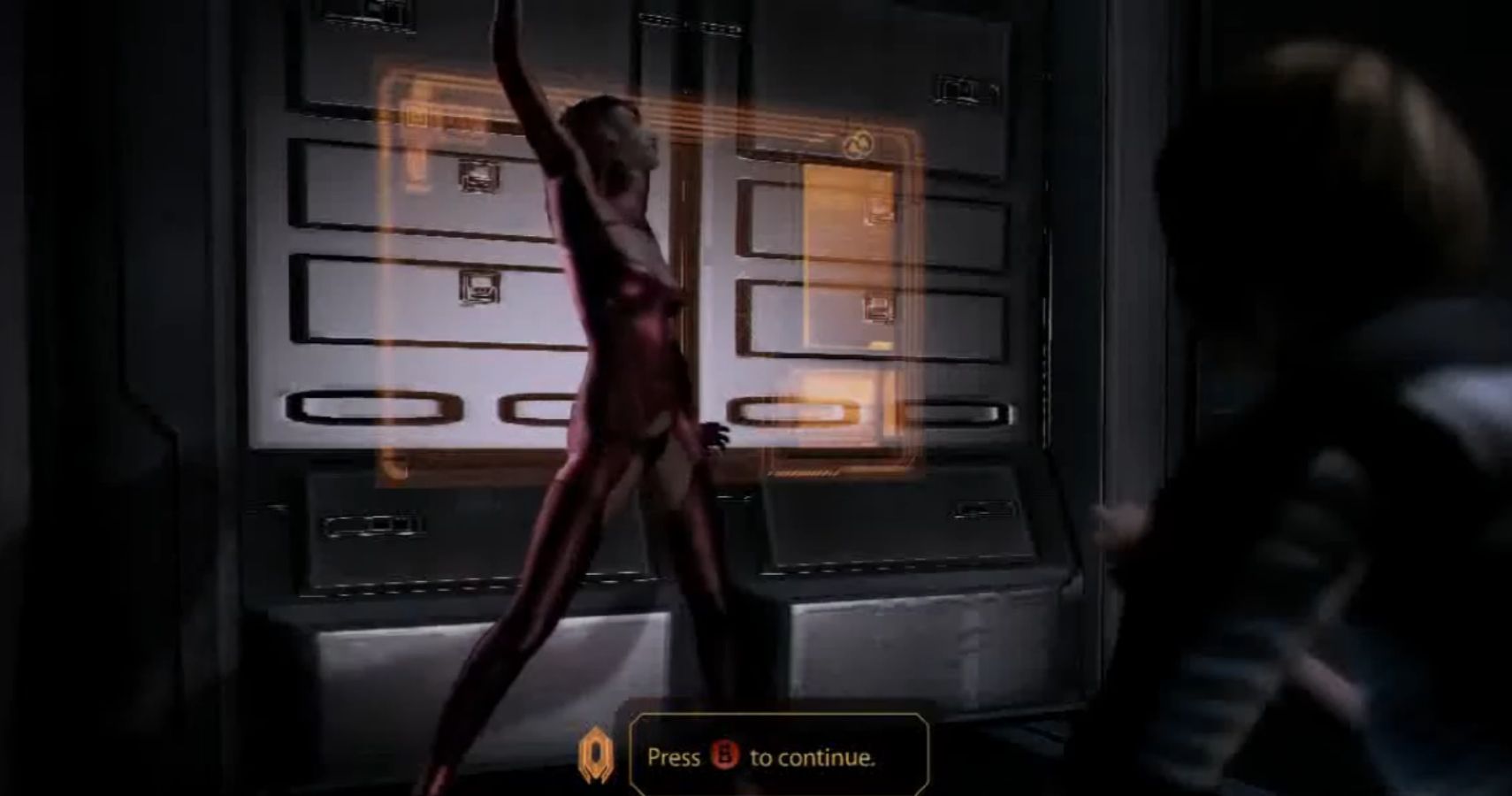 There are real-life implications for portraying bisexuality like this. I’ve lost track of the amount of times my bisexuality has been treated as a college girl phase, and you don’t have to look far to find stories from bi and pansexual people who feel fetishized. Even though I am sure this is unintentional, this also didn’t help with the overwhelming feeling of bisexuality being a dirty little secret that shouldn’t be brought up – coming out felt like telling people I’m game for a Kelly-esque lapdance if they buy me dinner once. Not making a big deal about it made me feel like the calm and collected Samara. In reality? I’m pretty boring. I’m somewhere in the middle – I’m like Jacob with a bi mod I guess.

Meanwhile, there was no such fear on the Dragon Age team. If anything, it only got gayer and gayer, with all four romantic options being bi/pan in Dragon Age 2. This allowed for a wide variety of representation – the sexually confident Isabela, the shy and naive Merrill, the tortured soul of Anders, or the broody Fenris.

The Mass Effect team built up its confidence again in the third instalment and even threw a bi Kaidan at us for our troubles. Finally, the Ls and the Gs in LGBT got acknowledged, and representation of the Bs surpassed what we got in Mass Effect 2. Nothing for the Ts until Andromeda, unfortunately.

The rollercoaster of bisexual representation in the Mass Effect series is hopefully a relic of a bygone era – a time where The Gays were an inconvenience to be pushed aside and moral panics dictated a writer’s creative freedom. And hell, when that LGBTQ romance mod drops for Legendary Edition, we’ll get the Mass Effect 2 that we should have got in the first place – the one with a phenomenal story, written by a team not held back by homophobia and media outrage.