This article contains spoilers for Cyberpunk 2077.

Last year, I almost gave up on life and slit my wrists.

I remember sitting my kitchen floor one sleepless night last October in my Metro Atlanta basement apartment, reeling from two breakups, multiple rapes, repressed childhood abuse, and recent estrangement from my family. In that moment, I deduced that there was no point to any of this suffering. My life was never going to get better, and the most logical course of action was to just remove myself from the world. That way, I couldn’t be hurt any more, and I couldn’t hurt anyone.

I sat down with a knife I washed and sharpened just for the occasion. Tears running down my face, I gritted my teeth and brought the knife to my wrists, flashing back to every single shitty thing that had ever happened to me – and that I’d done. As the cold, wet steel started to cut into my trembling wrist, I pictured what this would look like to the sweet lady I lived with. By the time she’d find me, I’d have long since bled out and died on the kitchen floor. I imagined how she’d react, then how my friends would react, then how my parents would react. And as all of these possible futures came to pass in my head, I felt like it was the only way my life could’ve ever ended.

Then I heard a meow. A meow from outside, one that shattered those futures in an instant. It was Chloe – my landlady’s cat who visited every night to sleep my bed, and left near-daily dead mice at my doorstep. As soon as I heard her, I pictured her trying to paw at my corpse. I imagined her sad meows as she nuzzled my lifeless hands. I realized I’d never get to pet her and feel her purr again. Thinking about this, for whatever reason, broke me more than anything else I’d pictured. I threw the knife down, stood up, and rushed to my front door to let Chloe in.

I curled up next to her and cried for hours and hours, before I resolved to tell the people in my life what had happened… and to finally get help.

I hope you’ll excuse my self-indulgent trip down memory lane, but I’m sharing this story for a very specific reason: Cyberpunk 2077, and namely, its treatment of Evelyn Parker. 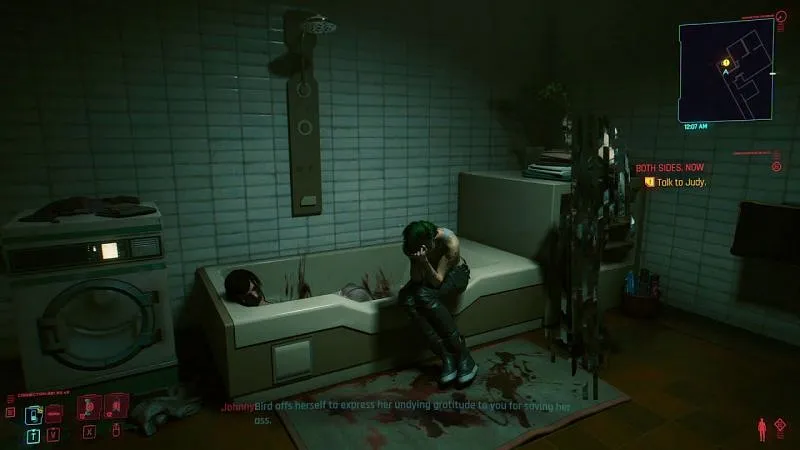 Evelyn, when you first meet her, is an enthusiastic and perky employee at Clouds – a stylish and classy “doll house,” where clients are serviced by cybernetic sex workers and treated to high-end VR sex romps. She’s one of the first female characters you meet who has any degree of agency, and was featured pretty prominently in the game’s marketing. It’s safe to assume that she’s going to be a main quest giver in the game, or at the very least, an established presence beyond the opening act.

Unfortunately, a time skip throws that assumption into disarray. After a heist you planned with Evelyn goes awry, she’s silenced via the hacking of her cybernetic augments and left in a semi-comatose state. She’s then raped repeatedly by the owner of Clouds, before being sold off to the Maelstrom gang and used in a series of brutal snuff films. Even upon being rescued by V and her estranged lover Judy from an abandoned power plant, Evelyn is unable to speak or move on her own.

But while a more compassionate storyteller would deal with Evelyn’s slow recovery from unspeakable trauma, and maybe even give her the chance to enact vengeance on her captors, CDPR instead opts for a grisly gut punch that serves no narrative purpose than allowing the player to shack up with Judy. Upon returning from the grocery store, Judy finds Evelyn dead in the bathtub, wrists slit. At some point, she became self-aware again, and her immediate instinct was to kill herself.

Now, suicide in games doesn’t actually bother me, and sexual violence doesn’t usually either. When handled right, in titles like The Missing or LA Noire, using rougher subject matter can speak to trauma in interesting ways. Mature art needs to deal with mature themes sometimes, and that’s okay. But where I draw the line, personally, is this comically grimdark and callous attempt at shock value. Evelyn’s death isn’t handled with any degree of tact or empathy – it’s an edgy plot twist meant to punch the player in the gut, before shuffling them along to the next glitzy action set piece. The plot point is scarcely brought up after that, and when it is, her trauma is never put at the center. We don’t ever get to really understand her – she’s just there to be abused so we can feel bad about it.

Hell, even her abuse isn’t treated in a critical or nuanced way. “Bad people do bad things” is about as deep as it ever gets, and I’m pretty sure we’ve all seen that song and dance before. Unlike other cyberpunk works that deal with sexual violence, such as Dex or Ghost In The Shell, we don’t get a critical examination of what led to this happening to Evelyn. She’s a one-dimensional punching bag for players to feel sorry for. 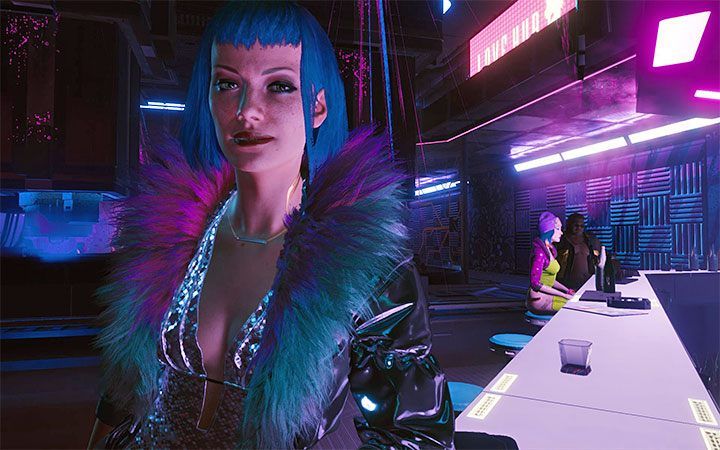 Also, it’s worth noting that this plot point has been done before and done better in the 2003 anime Gunslinger Girl. One of the main characters, Triela, is resuscitated after being raped and almost murdered by the Mafia for a snuff film. She’s brainwashed and given cybernetic augmentations, before being forced into being a government assassin. Throughout the series, viewers see Triela threaten to be overwhelmed by her repressed memories, and are given a window into her broken mind. It’s a fascinating and compassionate look at the victims of sexual trafficking, granted by a clever, extremely cyberpunk narrative contrivance.

One would think a similar approach could be taken here, but unfortunately, Cyberpunk 2077 is too preoccupied with being edgy to make room for compassion. The consequence of that is that it cheapens such a profoundly upsetting plot point, and disposes of a character that could’ve been so much more interesting. Worse yet, though, is that it throws in grisly suicide and sexual abuse content into a game with no warning. Instead of knowing what they’re dealing with, players who might’ve just recovered from a suicide attempt have to stumble into this bumbling, inept depiction and grapple with that on their own.

Obviously, I’m not going to advocate for the removal of content. This is the story that the writers wanted to tell, and as gobsmacking as it is, that’s their right. But I question its inclusion, nevertheless. I question treating one of the most interesting characters with such a lack of empathy. I question putting this kind of content in something without a heads-up. I question if this was really the most original idea they could muster, and if it was, I question their ability to weave more serious narratives.

In the year-plus since my suicide attempt, my life’s gotten better. It’s been a hell of a fight, but with the help of therapy, the compassion of my friends, and a lot of hard work, I’ve managed to finally achieve the kind of life I’ve always wanted. I’m in a stable relationship, have a job I love where I work with people I trust, and have a whole bunch of friends who always let me know how much they care about me. Last October, I didn’t dream this life existed for me, and now, I know that I never want to give up this fight again.

I only wish that CD Projekt Red gave Evelyn that same chance.

Next: How Call Of Duty Does Microtransactions Right 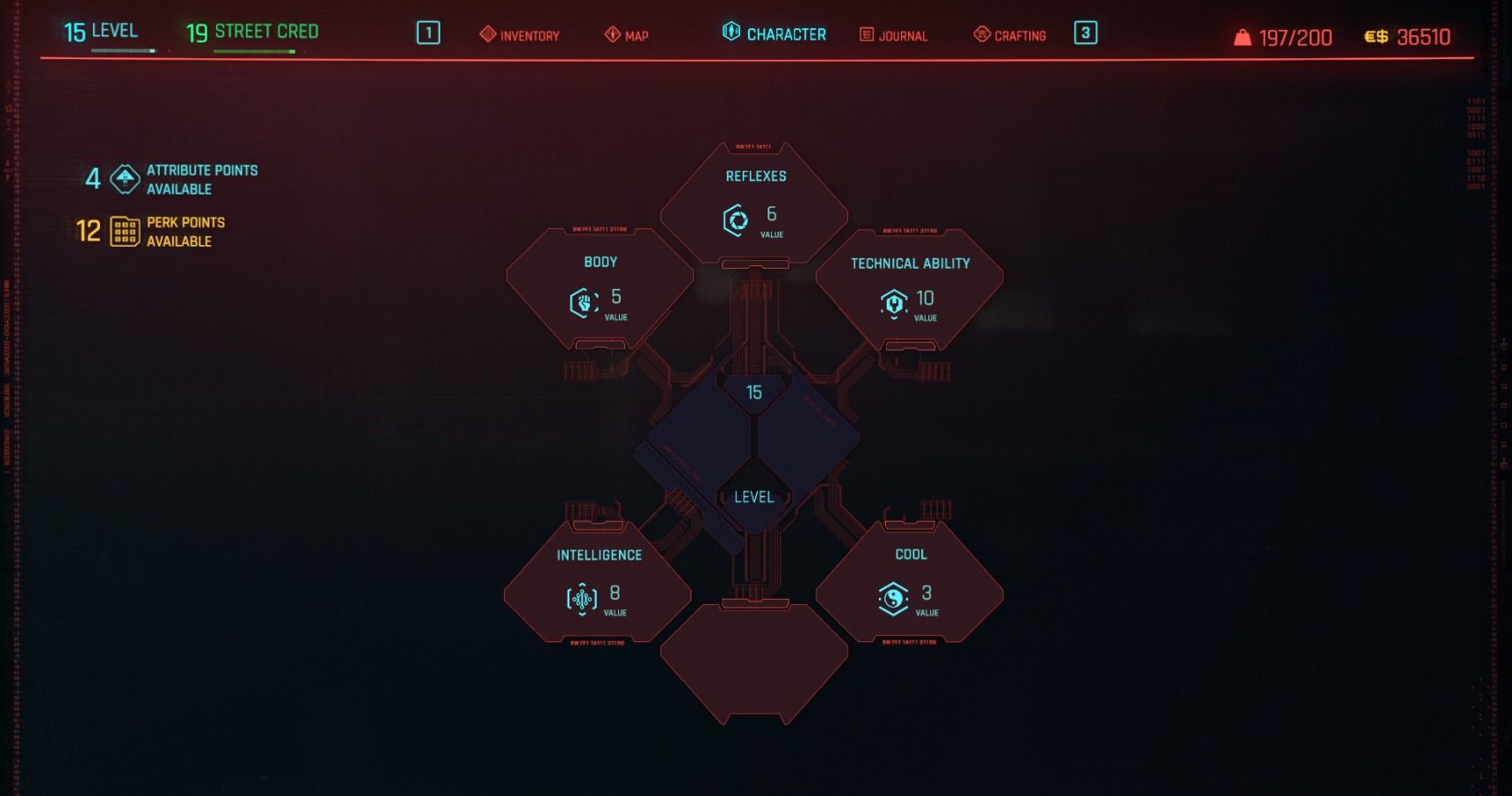