The trailers for Darksiders Genesis made me think the game would take the series into a new genre.

Where previous Darksiders gamers were third-person action titles, the most immediately visible change present in Darksiders Genesis is the switch to a zoomed-out, three-quarter perspective, giving it the illusion of being a dungeon-crawling, loot-collecting hack-n’-slash game. Genesis looked like it might have been a clone of Diablo that was skinned with Darksiders characters and lore.

The trailers and screenshots deceived me, however. While the shift in perspective does offer some slight changes to the flow of the game’s combat, Darksiders Genesis still fundamentally plays like a Darksiders game.

You aren’t constantly collecting loot and leveling up your character. This is still a game about hitting things with light and heavy attacks while occasionally platforming across heavily signposted climbable surfaces, running around in circles looking for a way to open a door, and then returning to beating things up.

Darksiders Genesis’ story is pretty simple, and you don’t need to have played any of the previous games to make sense of it. Lucifer seems to be plotting something down in hell, and has been making a series of deals with archdemons to consolidate power.

To sum it all up: The devil is bad, you have to stop his plan, and the game may look like Diablo and its ilk, but it still plays like a third-person brawler with very simplified versions of Tomb Raider-style puzzles. That just about brings you up to speed, even if you’ve never played another Darksiders game before.

Your choice of characters

Players have the option of playing as the original Darksiders protagonist War, or his brother, the new playable horseman Strife. The two kill demons, and fight their way through rare and somewhat uninspiring puzzle platforming.

So long as you play defensively while one character is knocked out, it’s pretty easy to avoid seeing a game over screen in single-player simply by making sure you have a character in reserve before you try anything too risky. By comparison, in co-op mode, both characters can be controlled at the same time, with one player having to revive the other if they run low on health.

War is a figurative tank, able to take big hits, deal out damage, clear space around himself with area-of-effect abilities, and block incoming attacks. He has to be in the thick of the action to be effective, but he’s beefy and resilient.

The new playable character, Strife, works best as a long-distance glass cannon. He has less overall health than War, and can’t block. But Strife has access to a pair of attacks such as a pistol with infinite ammo, as well as an arcing lightning gun that can connect nearby enemies and shock them all, forming an electric chain of death. And that’s not all, he has an entire selection of different attacks that can be mapped to those buttons.

These new ammo types are unlocked either by finding secret rooms off the beaten path, or by spending currency between levels to purchase them outright. Strife can also build his power meter by landing a series of shots without missing, making his weapons temporarily more powerful, or maybe changing how a gun works completely.

Darksiders Genesis mostly allows players to stick to whichever character they find most fun in single-player; it does occasionally force you to use specific characters for puzzle segments. Other exceptions include a couple of boss fights that require one of War’s abilities to progress. But on the whole, you can pick a character you like and stick with them, or just bounce back and forth for fun.

While the zoomed-out perspective in Darksiders Genesis does fix one issue from Darksiders 3 — it’s now much easier to handle large numbers of enemies at once — it is far from a perfect solution to proper combat visibility.

At various points in my adventure, cosmetic environmental elements like fences, trees, and rock formations obscured sections of areas designed for battle. While the player character glows neon blue when obscured, enemies do not, so at times I couldn’t see what I was fighting. The inability to rotate or move the camera, paired with this ill-thought-out level design, was often frustrating. 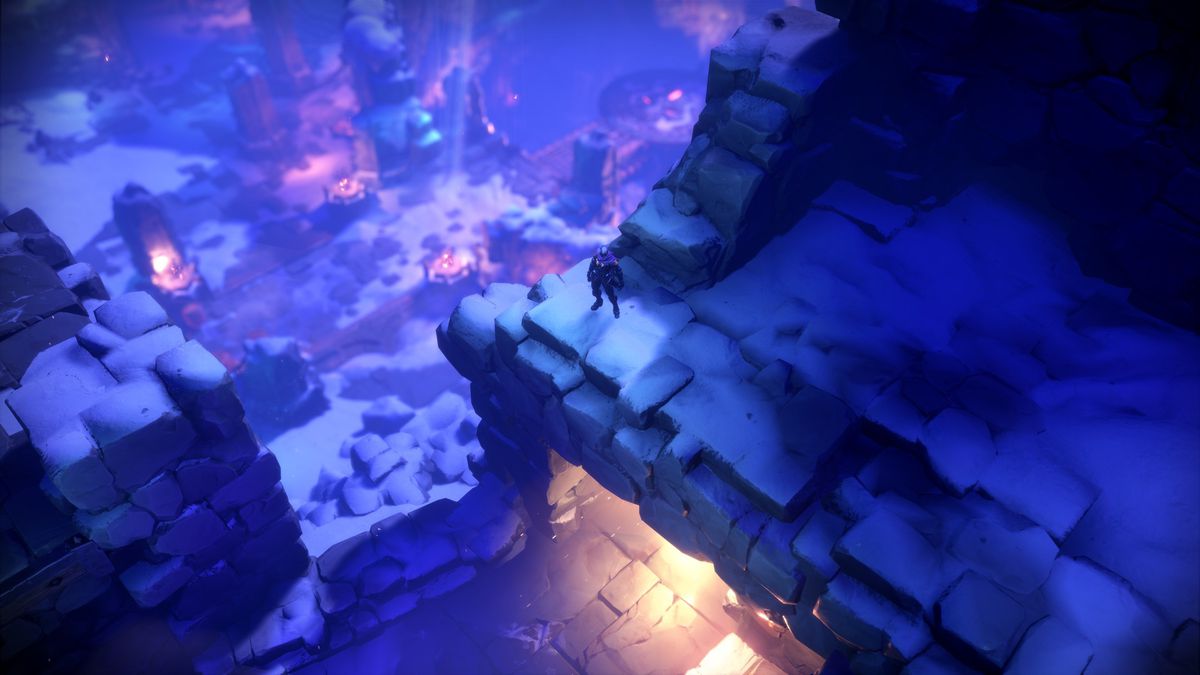 Sometimes the view makes everything look epic, while at other times it makes things hard to see at all.
Airship Syndicate/THQ Nordic

Some of the past Darksiders games excelled when they focused on one-on-one enemy encounters. But the vast majority of combat in Genesis, outside of a few boss encounters, is about managing large waves of enemies, keeping your space, and not getting overwhelmed by the hordes attacking you.

It certainly makes for a different pace of combat, and it’s a mostly enjoyable change, but sometimes these waves of enemies are used just to make boss battles more challenging in a way that feels cheap.

While the boss fights in Darksiders Genesis frequently have interesting gimmicks to overcome, and feature a decent amount of character and personality, pretty much every boss fight in the latter half of the game includes large numbers of very powerful enemies spawning in to complicate things.

This forced me to play defensively and defeat seemingly unending enemies just to get a brief shot at the boss, who was the only fun part of the fight. This felt like a really cheap way to stretch out the fights, and resulted in annoying difficult spikes rather than an enjoyable challenge. Many late-game bosses also make use of one-hit-kill attacks, which can lead to moments of rage-inducing frustration.

Outside of the boss battles, these hordes of interchangeable enemies are often reused as the game goes on. One set of enemies may explode and leave pools of lava on the ground that must be avoided, and in a later level there may be the same enemies — but they’re green! — and now they leave puddles of acid when they die. It’s the same enemy, with the same challenge, and finding old ideas with a slightly new paint job continues. I spent a lot of time killing things that may look a little different but never require new thinking to fight. The combat itself is fun, but the lack of variety in the enemies often reduces it to busywork.

The puzzle and platforming design are also disappointingly weak. Most puzzles boil down to the same handful of skills: Find the two portal spots and reach or shoot through the one you can reach, light a torch using another lit torch, punch the spring pad, and move the electric ball through the maze.

I’ve seen all this before, and what’s more, few of the puzzles feel connected to the world in a meaningful way. The puzzles seem almost to be an afterthought, a way to make sure the game isn’t only combat. But that just means that the enjoyable but rote combat is broken up by uninspired puzzles.

I also ran into some frustrating bugs, although a patch released on Dec. 2 might have smoothed them over. Some of the issues I experienced halted progression, and as Darksiders Genesis doesn’t feature checkpoint reloads, I sometimes had to replay as much as 40 minutes of the game to recover from an issue. Unfortunately, it’s hard to tell exactly what that patch fixed, since there was no way to play through the game again to publish a timely review.

When a game knows it’s good, but not great

While the plot of Darksiders Genesis is predictable, the dialogue shared between War and Strife is at times amusing, creative, and even heartwarming. There is some nice character development between the pair, even if their larger narrative isn’t that interesting. At least they’re fun to have together!

But in-game characters sometimes point out that it’s strange that Fury and Death — the other two horsemen — are absent from the story, and it gets really odd, really quickly.

“Considering how difficult this mission is, it seems strange that the other two aren’t here,” someone may say. “They must be doing something important.” This happens relatively often! 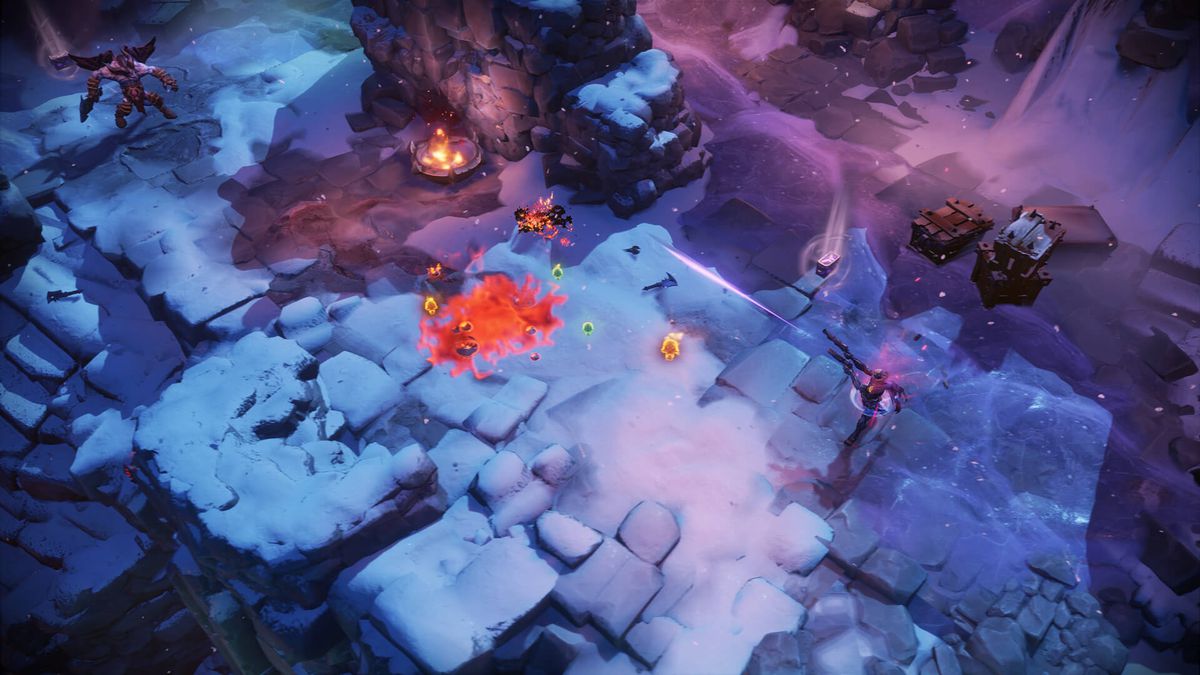 It’s unclear if these repeated comments are the development team trying to excuse not giving the player four playable characters, or a setup for a future game about the adventures of the other two horsemen, or perhaps a hint at some kind of upcoming downloadable content. At launch, though, it feels strange that the game’s writers expend so much effort telling us that they know characters are missing, without giving us any information about how or why. But hey, it got me talking about it and thinking about it, so maybe the strategy worked?

The other thing I keep thinking about after finishing Darksiders Genesis is a line of dialogue near the end of the story:

“Do you ever get bored of endlessly slaughtering hordes and hordes of demons?”

I had some fun during my 15 hours of fighting through this many demons and solving a fair amount of environment puzzles, but I don’t feel the urge to take on any of the bonus content the game keeps urging me to go back and attempt.

My first playthrough ended with a rushed set of pictures and some exposition about the state of the world, followed by silent credits and a weird emptiness. To get the “real” ending, one has to play through the unlocked “Apocalyptic” difficulty level, and I’m not interested in doing that. The whole thing feels like yet another way the game was stretched out, and not for the better.

But to answer the question asked by a character in the game: Sure, I had some fun, but I was eventually bored by the constant combat and puzzles that felt like chores meant to break up the real action of the game. An updated view of the action makes Darksiders Genesis look fresh, but after looking under that new paint job I found a game that feels tired, despite a few bright spots.

Darksiders Genesis will be released Dec. 5 for Windows PC and is listed as a Google Stadia game. It is scheduled to be released on Nintendo Switch, PlayStation 4, and Xbox One on Feb. 14, 2020. The game was reviewed on PC using a download code provided by THQ Nordic. You can find additional information about Polygon’s ethics policy here.