How did difficulty become such a controversial issue? And why are so many people arguing about it on social media every few months?

I don’t have good answers for those questions, nor do I want to tell you what to think about difficulty. But I do have a different point of view on the discussion as a professional game designer, and I hope that, after reading this, you’ll understand a little more about how we think about difficulty, and why it’s such a contentious topic.

Maybe one of the best things to remember, however, is that there is no right answer to the question of “how hard is too hard” or “what is the right kind of difficulty?” But breaking everything down to “hard” and “easy” is a concept that has been outdated for some time.

When I think about difficulty, this is how I approach the topic. Get ready to think like a game designer.

The latest discussion about difficulty in games cropped up when Hideo Kojima described Death Stranding’s “Very Easy” mode, which is expressively designed for people who want to play the game as a cinematic experience.

The mode has no effect if you don’t choose to use it, but those who turn it on will be able to enjoy the story, setting, and characters without having to “git gud” and fight through the action itself.

My goal in these discussions is always to try and reframe the conversation toward a more empathetic community and diverse approaches to playing games, but also to focus on how game designers think about “difficulty” — because in many ways, difficulty is not really an accurate term for us. If anything, Kojima did a better job than most at communicating exactly what he’d like this mode to be used for, and that communication with players is always half the struggle.

In fact, the one thing that always astounds me in these discussions is how fundamentally different the discourse around the topic is with game designers versus players. That’s not a bad thing — we approach the same art form from two very different angles — but it’s something we need to reckon with before we get anywhere.

Byron Miller and I, former colleagues at ArenaNet, have been having game design theory lunches to flex our design muscles a bit. Our first session was about Sekiro: Shadows Die Twice in particular, and the difficulty in Souls-like games in general.

At the core of the difference between how game designers and players speak about difficulty is the fact that we discuss it in terms of skill progression. All difficulty design is essentially that: crafting how players will learn, apply skills, and progress through challenges.

Game designers don’t actually talk that much about difficulty; we talk about things like progression systems and mental load. None of these things are strictly questions of “difficult” versus “easy” — they’re more about how we guide players to greater competency, and what that journey should be like, ideally.

And here is a unique progression system in Souls-like games such as Sekiro: Instead of teaching players the skills they need to beat a sequence or challenge beforehand, Souls-like games require you to progress by trial and error, learning by doing, understanding the rhythm of a fight while being in the fight itself.

In Souls-like games, death is not failing; it is growth. That has been the case in many games in the past, but this genre makes the connection between learning and failing explicit. It’s easy to understand, which is part of the reason players find it so welcoming despite the “difficulty” it creates. It feels fair to them.

Subsequently, what is at the core of a Souls-like game, from a designer’s perspective, is the importance of trust. We call this the player-developer contract. So much more is possible if the player trusts what we’re doing, and is comfortable failing in order to get better.

Whenever you play a Souls-like game, you agree to specific parameters.

Here’s the big one: You accept that dying and repetition are part of the core gameplay. You also accept that dying is inherently your fault and that the game (designer) will tell you how to improve or to fix your mistake to slowly learn to succeed within the game’s systems over time.

This dynamic between the two parties is the most crucial part of games that employ this kind of progression system: It is my job as the designer to be extremely clear about the way I communicate not only your failure to you, but also how you will be able to improve. Let’s call this the Dark Souls formula of player trust. I’ve illustrated it below: 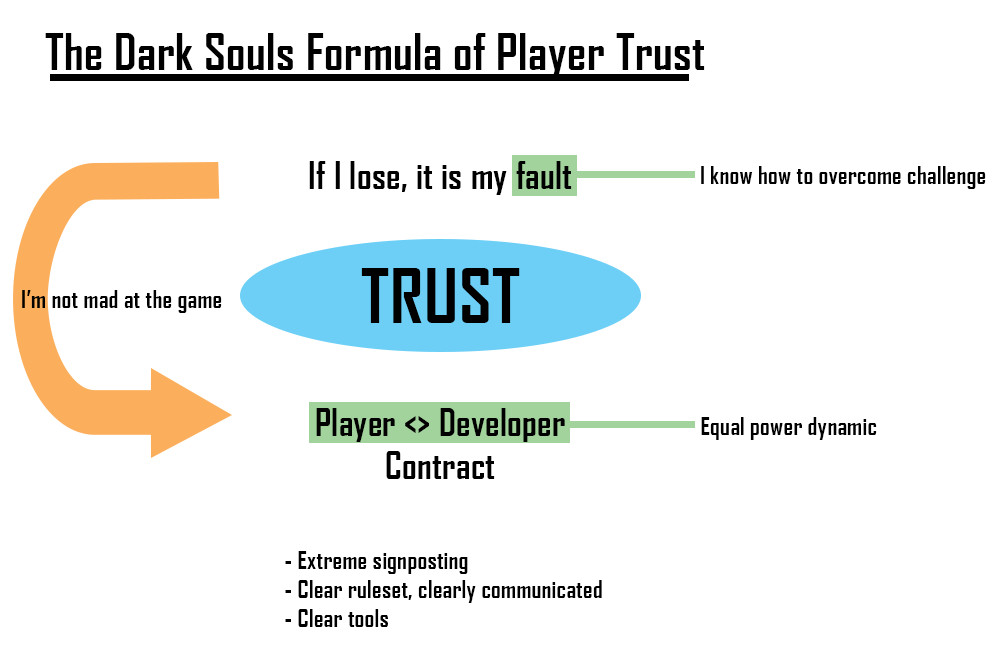 In our lunch, a large part of the discussion revolved around that idea: that at the heart of things, a surprising amount of game design is about trust.

That is even more true in the Dark Souls formula for difficulty and progression. Byron pointed out that a big part of this equation is the fact that players and developers are seen as equals. This means that in practice, we need to implement extreme signposting measures, have clear rulesets that are firmly and simply communicated, and give players clear tools to use to overcome the challenge we place in front of them. Every bit of game design is a conversation with the player, but this aspect of game design makes that conversation even more important.

This is made harder by the fact that we don’t, and shouldn’t, communicate failure and learning explicitly. Instead, we do so by using game design techniques specifically employed in combat scenarios to communicate why you died, or just failed.

In game design language, we call these affordances. I’ve put together a short list of affordances and what they do to help you understand how it all works.

Depending on who you ask, the most common technique is telegraphing, also called signposting. It means that we exaggerate animation, visual effects, and pacing around crucial attacks to give you time to either react to them or to observe what killed you clearly and obviously as you play.

It’s a mixture of defined and implied affordances. They are our most important tool to make a progression system work where failure is an integral part of the learning curve and trial and error is the journey. You have to know, see, and understand what happened right before you died, and have some idea of how to change your approach the next time you face that enemy.

Telegraphing is the core of the trust system, since it’s where the game designer effectively signals exactly why you died (here is a big, bad, flashy animation that you didn’t notice) and how you can overcome it (you need to avoid this attack).

That means that frustration, but not being mad at the game’s rules, is an integral part of the formula. You might get mad, but you should be ready to try it again and do better.

Other examples of the same practical progression system would be Super Meat Boy, which essentially built an entire game around exactly this principle while removing all the friction from it: Instant respawn, clear telegraphing, and environmental affordances make for the exact same formula as Souls games do.

In the past couple of years, our industry has evolved many creative ways to engage players in progression systems, letting them choose what that means to them and find ways to support their play styles. Games such as Celeste have been pioneering beautiful options in allowing players to modify their experience.

Celeste is hard, but its creators are smart about difficulty

In my personal understanding, difficulty modes as we know them — easy, normal, hard, etc. — are an old-school approach to the player-developer contract. They are essentially an attempt to group gameplay implications together, clumsily, into categories that get a difficulty layer, but don’t actually tell me what it means for my player experience. Difficulty layers are therefore a shorthand for gameplay flavors.

Celeste an example of a modern approach in contrast to difficulty modes: The ability to choose what defines challenge and comfort for myself is when designers forgo assumptions about players to give them more agency over gameplay styles. Do I feel most challenged by speed? Would I like to change the way the game demands controller dexterity?

None of these are really a question of easy or difficult, only different flavors for how I like to be challenged.

In that sense, I appreciate Kojima’s approach because it is more deliberate about what the mode is, even if the name does not forgo the shorthand approach. Essentially, Death Stranding’s Very Easy mode gives the game more of a cinematic flavor — that’s it. There is an audience among Kojima fans that play his games for exactly that, so it makes perfect sense to include a mode for them.

Recognizing that people experience challenge in a multitude of different ways means that our industry is progressing and growing. The conversation evolves as we talk with each other, even if the only language we’re paying attention to is game sales or reviews. Where we fall short is in how we communicate difficulty; it’s basically a shorthand description of something that is actually a lot more complex than just “this is harder” and “this is easier.”

So the answer to the question of how game designers think about difficulty is: We don’t think about it in the way most people believe we do. In game design terms, Souls games aren’t the “difficult” games while others are not. We think about what makes progression and learning curves punishing, and what the motivation would be to overcome punishing systems.

The Souls games aren’t the most difficult ones in the eyes of a game designer, but they are the most successful at communicating with the player and establishing trust. Kojima telegraphing what to expect from the different modes of Death Stranding is another way of developing trust ahead of time. If that system doesn’t feel right to you, you can avoid it and play the game in a way that gives you more satisfaction.

I personally would love to see the player community take on some of these lines of thinking and put up fewer walls around games they deem more hardcore. In reality, all we’re doing is engaging with a different style of progression and learning, without one being superior over the other.

All games have their place, and there is no such thing as elite gamers versus casuals — only different styles of growth through the stories we put in front of you. And it can all happen as long as we trust each other. Isn’t that great?