Mass Effect 2 is a game that revolves around changes of pace. Most of the levels are fairly similar in design and scope – you land on a planet, go through 20-30 minutes’ worth of combat, and earn a story beat tied to squadmate acquisition, loyalty, or the encroaching Reaper threat. In between these slices of high-octane action, though, this is a game that is consciously and remarkably slow-burning – you chat to your alien pals, scan uncharted worlds for minerals, and bury your brain in what is quite frankly one of the most dense, complex, and riveting codex collections in video game history.

The Normandy Crash Site, despite being considered relatively boring by many, is the single, perfect vignette that combines these two radically distinct sides of Mass Effect 2. The mission design is pretty simple – as always, you land on a planet and are tasked with exploring it, but combat is completely absent. In fact, the entire area is peopled by spectres alone – and not the Council kind.

I’ve always been intrigued by walking simulators. Everybody’s Gone to the Rapture is still one of my favourite games from the PS4 era, while Gone Home feels like a timeless distillation of a distinct cultural moment in games. Edith Finch has a bit more to it, mechanically speaking – that canning factory level! – but ultimately it’s built around the same concept of slow discovery without the promise of instant gratification. Admittedly, this kind of atmospheric design feels a bit awry in Mass Effect, a series filled with bombastic explosions and spaceship chases through the Milky Way at FTL speeds. This is what makes it so special, though – while the Normandy Crash Site can easily be dismissed as boring, I found it to be far more quietly eerie than pointlessly monotonous. 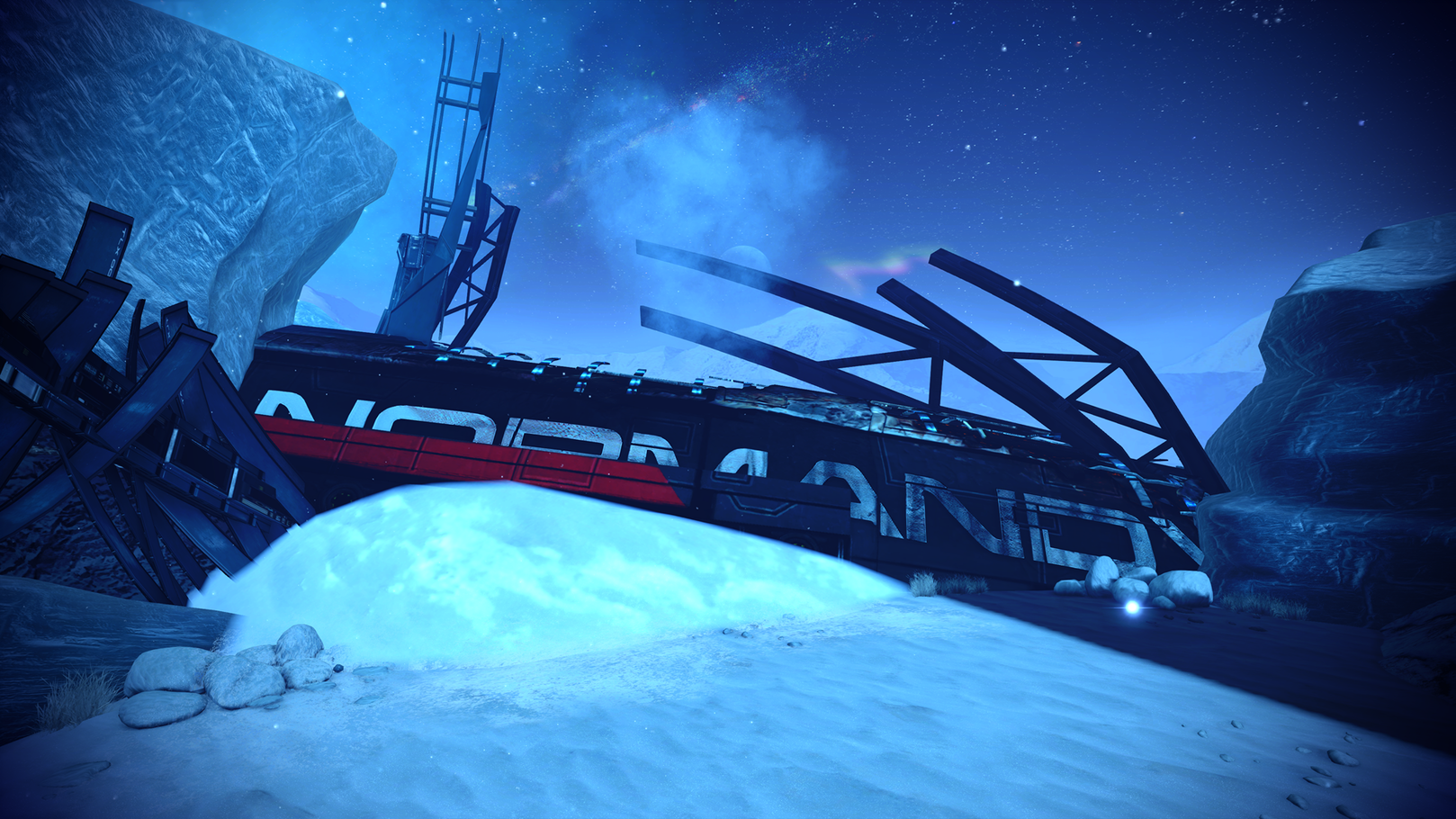 Mass Effect 2’s introductory sequence is fantastic. You’ve taken down Saren as per the end of the first game and are trailing the Reapers – all of a sudden, an impressively ugly ship that looks more like a flying boulder than anything invented by a super-cerebral race of ancient aliens blows you up and you’re dead for two years. When you reawaken, Mass Effect 2 puts the pedal to the metal and speeds through story beats as if it’s trying to crash all over again, which means the people lost in the maelstrom of the Collector attack are forgotten almost immediately.

Eventually, though, you’ll learn that Navigator Pressly, a xenophobic twat who I hated in the first game, had actually realized the error of his ways and was making a conscious effort to become a better person. His dog tags are one of 20 sets scattered around the desolate, snowy resting place of the Normandy. The other 19 tags belong to people whose names you never learned – people who served with you, but who never earned your attention. All gone. All dead. 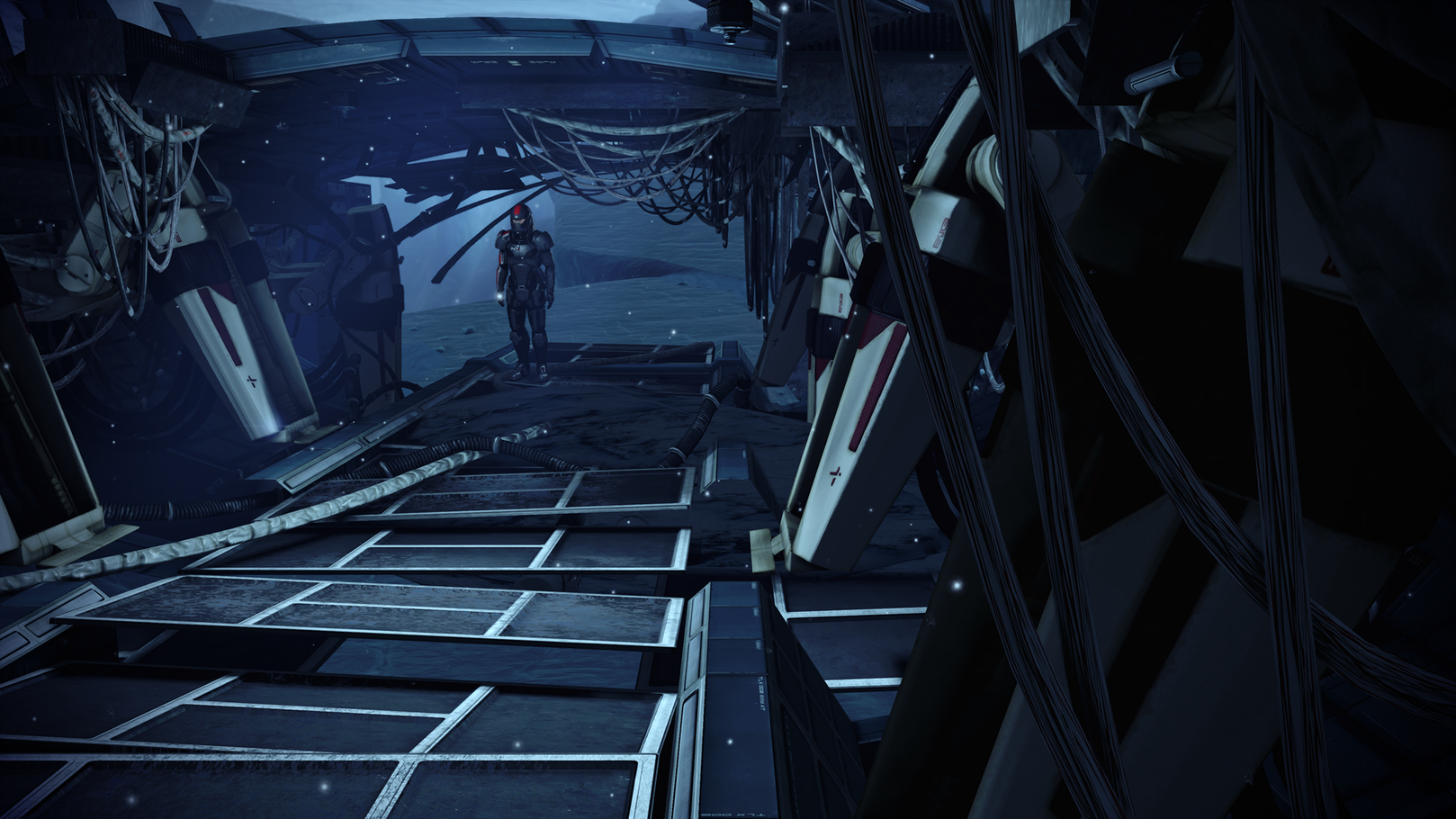 It’s a unique part of Mass Effect, this weird and wistful wandering around a random planet filled with nothing but wraiths and wreckage. Ostensibly it’s a bit boring – you just waltz about shooting a few boxes to uncover dog tags, while approaching random hunks of detritus triggers flashbacks to the original Normandy. Depending on who you saved, you’ll get a momentary, blurred visual of Kaidan or Ashley. Elsewhere, Joker is at the helm and the galaxy map is surrounded by tons of dog tags – or, more accurately, the people who used to wear them.

I hated this mission when I was a teenager playing Mass Effect for the first time. It was just so mundane, so ridiculously pointless. Why erect a memorial here, on a planet nobody will ever see, where ghosts are confined to roam for all of eternity around the ruins of a ship spearheaded by a person who didn’t even know their name? Now, though, as I play through the trilogy for the first time in almost a decade, it hits a lot harder.

The cold and clinical atmosphere of the planet’s snowscapes is perfectly conducive to how defeatingly sad all of this is – but that, in turn, is inspiring in its own weird way. All of these people died for nothing unless you make it something. The skeleton of the Normandy, a seemingly indestructible concept on top of being a vessel, is a stark reminder of the stakes you’re up against. Commander Shepard, first human Spectre and savior of the Citadel – Commander Shepard, former person of report on the revered but destroyed Normandy. Traversing this small but atmospherically dense area fills in all of the gaps dotted throughout Mass Effect 2’s intro, but it does so vaguely with white noise and blurred lines. It’s incredibly liminal, a physical place that feels temporary and transitory, while every second there bears the weight of a monotonous hour. By the time you leave, you never want to go back – strangely, I think that’s supposed to be the point.