My youngest son, a boisterous 8-year-old, will often ask me about the games I’m playing for work. And I’ll tell him. “I’m previewing a new game about aliens,” or “I’m reviewing a strategy game about samurai.” It’s a nice way for us to connect, although he views my game tastes as pretty dreary. He’s not mad into sweeping historical death sagas or heartfelt indie love stories.

When it came to telling him about my current interest, Totally Accurate Battle Simulator, I couldn’t recall the game’s name, so I had to describe the general concept to him.

“It’s like an overhead view thing where you take a dozen archers and a knight and then you take a Viking berserker and five shieldmen,” I said. “And they are two opposing teams, and you let them loose against each other, and then you see who wins. The strange thing is, they’re like silly ragdoll soldiers, but their goofy physics don’t matter because as the battle progresses, you really get into who’s gonna come out on top.”

Long before I’d reached the end of my précis, he was bouncing off the walls yelling “TABS, TABS, TABS”. Turns out, he was already familiar with the game via his intense diet of YouTube gameplay videos.

So I agreed that we would review TABS together. The project has turned out to be the most fun I’ve had with a video game in ages.

TABS has a campaign mode that takes us through various military periods. Ancient Greek-style phalanxes will appear alongside Persian-esque archers and Romanish swordsmen and Carthaginian battle elephants. But they’re not, in the least sense, historically accurate. They’re cartoonish and floppy.

So me and the kid are staring down the barrel of a small army of tactically placed enemies, on one side of an area that’s shaped a bit like a tennis court. And we’re on the other side and we have a budget to spend on our opposing army. We hire our soldiers and place them as best we can. Then we surrender complete control to the game, sit back and watch the carnage unfold. Once the fighting begins, there’s nothing we can do to affect the outcome.

Despite the seeming madness of TABS’ battles, it soon becomes clear that, underneath the staggering figurines, there ticks a clever piece of mathematical symmetry. Each battle only lasts a few moments, but they are nonetheless thoughtful puzzles that require a strategic mien. I’m impressed how quickly my boy gets the measure of each unit and of our enemies. (It’s not just his YouTube helpers. He’s clearly figuring this stuff out.)

Sometimes our strategies go awry and our armies are slaughtered. Other times, the puzzle is too easy and we win, hardly losing a single warrior. There are a few puzzles that are annoying, most especially those that feature small numbers of fighters. Others are seemingly designed to present as though they’re fiendishly tricky, but turn out to require only that we spam the arena with tons of cheap, low level units. There are moments during this early access game (i.e. it’s still being developed, even though it’s publicly available) when levels become unplayable, because units get stuck.

Then there are battles in which we repeatedly fail to find the winning formula, howling in frustration as our last guy is mobbed by the enemy. Finally, joyously, the answer is discovered, and it all turns on the survival of one last heroic warrior, standing victorious among the shambles of war. We clap and high-five and first-punch and “yesssss.” and all that parent-kid stuff. 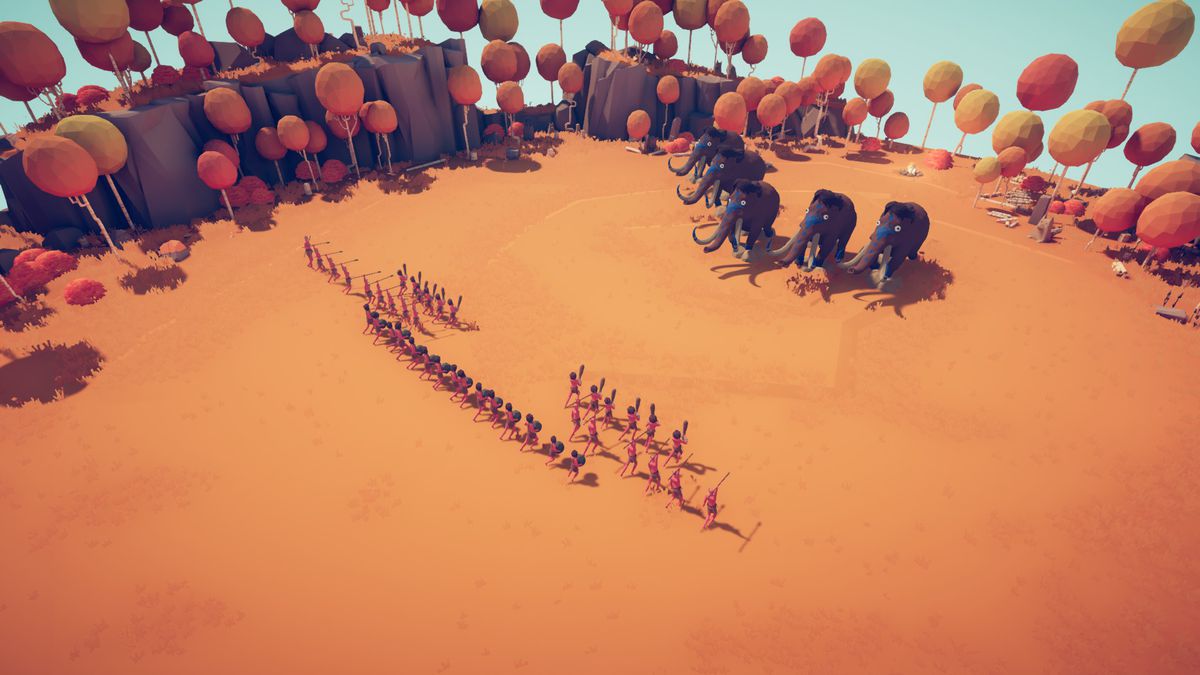 I am not, generally speaking, an ideal dad. I’ll play soccer with the kids or take them for a bike ride, but compared to The Great Dad of popular imagination, I’m spectacularly lazy and unimaginative.

I will do almost anything to avoid attending “fun” events that involve other kids, because they inevitably feature other dads, who are often the kinds of dads who love to clamber onto monkey bars, rather than sensibly read a newspaper on the park bench. Or they’ll do a roaring backflip into the swimming pool, splashing their delighted offspring and disturbing my sunbed musings about whether to order a Modelo or a Stella.

But at least when it comes to video games, I can both communicate enthusiasm to my kids, and engage with them. For this lad, we play a lot of Switch: Legend of Zelda and Mario Kart, mostly. On PC, I can’t be bothered with Minecraft, but we do love to play Raft together.

TABS is giving us a whole new avenue of fun. The campaign allows us to discover hidden new units that we add to our armory. There’s also a sandbox mode in which we can throw together the most improbable combinations, just for the fun of seeing what happens.

This game is very much like the little toy armies I played with as a boy: plastic soldiers and matchbox cars and miniature dinosaurs. Like millions upon millions of other kids, going back centuries, I’d set my miniatures up on the floor (‘70s parquet in my case) and play out the battle.

In my childhood, it was not expected that a father would play along, nor did it occur to me that such a thing were possible. Now I am a father of the 21st century, and playing with my kids is mandatory and, yes, sometimes, it’s fun.

TABS makes me feel like a dad on the front of a 1970s boxed game, Mousetrap or Battleship or whatever, clean-shaven in his v-neck pullover, bursting with paternal excellence. But unlike those games, TABS is constantly being updated and expanded, with new eras and new units and new puzzles. It’s something we can go back to, again and again. It’s like a little engine for funny narratives. My boy and I enjoy recollecting old war stories of battles won and lost, or positing fantastical potential conflicts between bizarre combinations.

This is an awesome game that I’ve been recommending to fellow dads. And when they come back to me and say what a great time they had, I bask in the glory of my glowing dadness.

Totally Accurate Battle Simulator is out now on PC for $14.99.