I’ve come to terms with the fact that I don’t have any grand ideas. Throw a piece of paper at me and shout “draw something” and I have no idea what will appear on the page if anything. I played the guitar every day for years, but if you ask me to play a song I’ll create a new brand of silence. I’ve hit 30, my mind has clearly degraded, and I’ve lost the childish curiosity I used to hold so dear. It’s a shame because if I were still young in body and mind, Game Builder Garage would be the only game I’d ever need to play again.

Game Builder Garage is exactly what the name implies. It is a unique game building tool, not really a game in itself, innovating on the quirky but obtuse tools the team at Nintendo introduced with its Nintendo Labo cardboard kits. Each of those included a Labo Garage, which allowed you to string together nodes representing button inputs and in-game outputs. You could easily make an incredibly basic guitar, with JoyCon buttons changing the tones as you strummed digital strings on the touch screen. It was basic, but it worked, and it held a lot of promise. Sadly, the community didn’t end up showing us the kind of potential this game maker had in the same way they did Media Molecule’s Dreams. 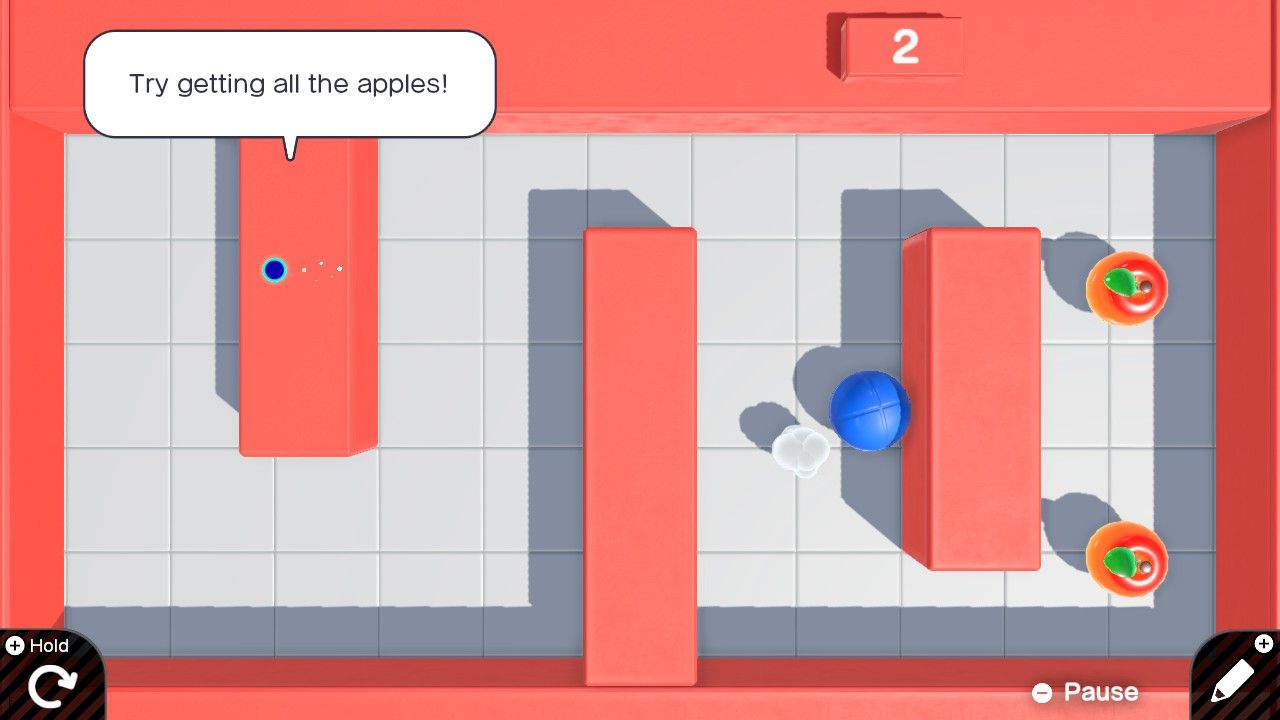 But Game Builder Garage has ironed out a lot of the quirks, and smoothed over the rough patches. Instead of the interface looking like a game of Asteroids, everything has been stylised like Super Mario Maker, and it’s just as easy to string together the fundamentals. But while Mario Maker is intuitive and levels can be built in mere minutes, Game Builder Garage has a lot for you to learn. When you start piecing together a new game, it assumes nothing. It is up to you to set the camera angle for the game screen, what player character you have – if any – what the boundaries of the world are like, how the scoring system works, whether there’s a time limit… This game asks a lot of you, and even with the simplified interface, only those that have spent a lot of time either with Labo Garage or actual game development tools will be able to instantly sink in and start creating. That’s where the Interactive Lessons come in.

Interactive Lessons take another page from Nintendo Labo, but this time it’s more like the act of building a cardboard creation. In Labo every step is visualised in 3D for you, and each fold of the cardboard is animated, with a text blurb telling you what to do. Across the Labo series, you have thousands of different text boxes, all of which amount to “fold the cardboard,” but it’s all in the name of keeping you engaged. And that’s what Game Builder Garage does, but it also falls into the same pitfalls as Nintendo Labo. You start with a blank game screen, and a personified dot – literally a speck on your screen – will start talking to you in a friendly manner, providing instructions on how to create a game. Things start off simple, programming a character that can walk on 2D and 3D planes, building floors, walls, ceilings, etc. Quickly, you’ll be moving onto projectiles, complex scoring systems, and you’ll be building entirely functional versions of game concepts you might’ve expected to see in 80s arcades, right alongside Asteroids. It all comes full circle. 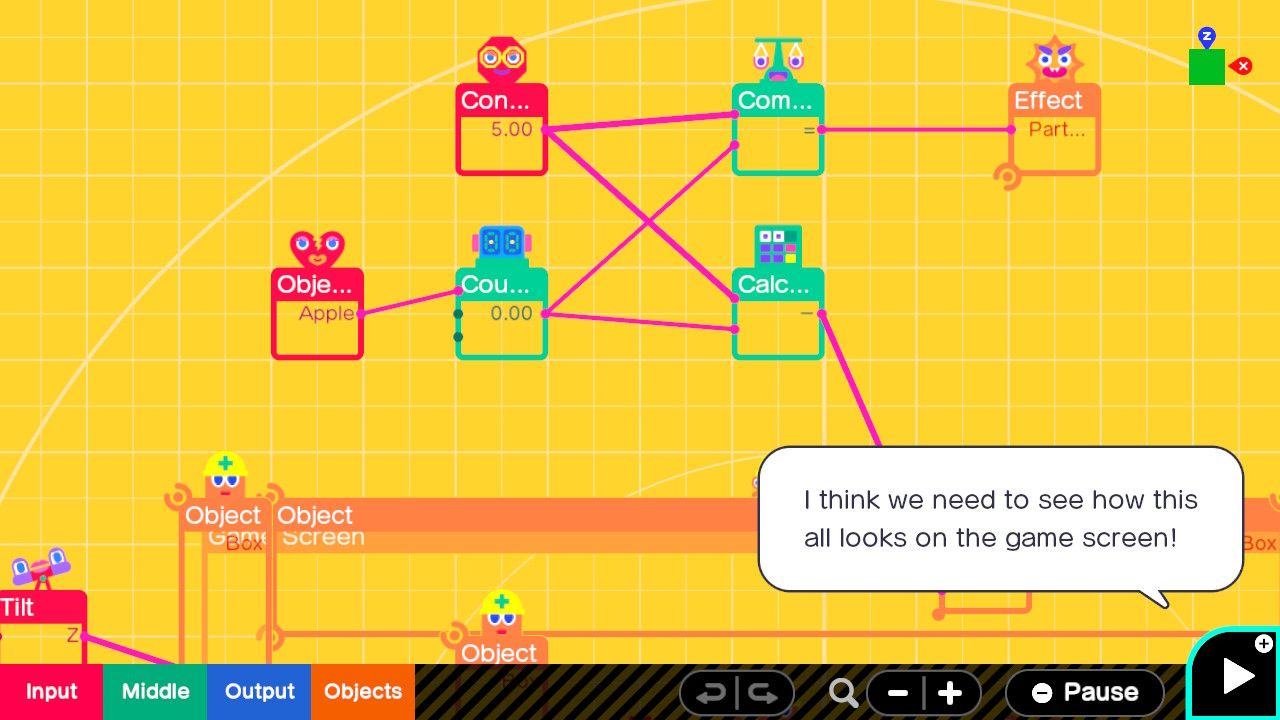 Unfortunately, it sometimes feels a bit tedious. The instructions are personified, each type of node you put down has its own characteristics, and each is introduced to you very slowly so you can understand what’s happening. This is, naturally, there so kids can absorb the information slowly enough to actually understand it all. If you’re looking for more straightforward instructions so you can just get right to putting a game together, you’ll be mashing through a lot of dialogue. After each instruction on the game creation screen, you flip back to the game world to see what you’ve changed – and the things you can actually change are fixed, so you can’t stray too far from the set instructions. As a result, even if you don’t read the dialogue in detail, you’ll know what’s going on. Smart for someone impatient like me, or children who perhaps can’t read quite as well, but it does really drag out these lessons, and unlike Nintendo Labo’s folding instructions, there’s no option to speed things up.

In between game creation lessons, there are short bursts of puzzles. You’ll be given a simple task, such as “collect the apple,” but the layout of the stage or the inputs may not allow for it, prompting you to jump into the game creation screen and change things around so you can solve it. Naturally, you can just remove the walls or drop the apple onto where you spawn, so many of the objects are locked, preventing you from changing their settings. This essentially narrows down the solution to “find whichever object you can actually edit” and takes some of the fun away. I found myself actively avoiding the game creation screen just so I could try to figure things out myself, and if that failed, I’d just tap on objects until something worked for me. These are supposed to be moments where you show what you’ve learned but often feel more like roadblocks. 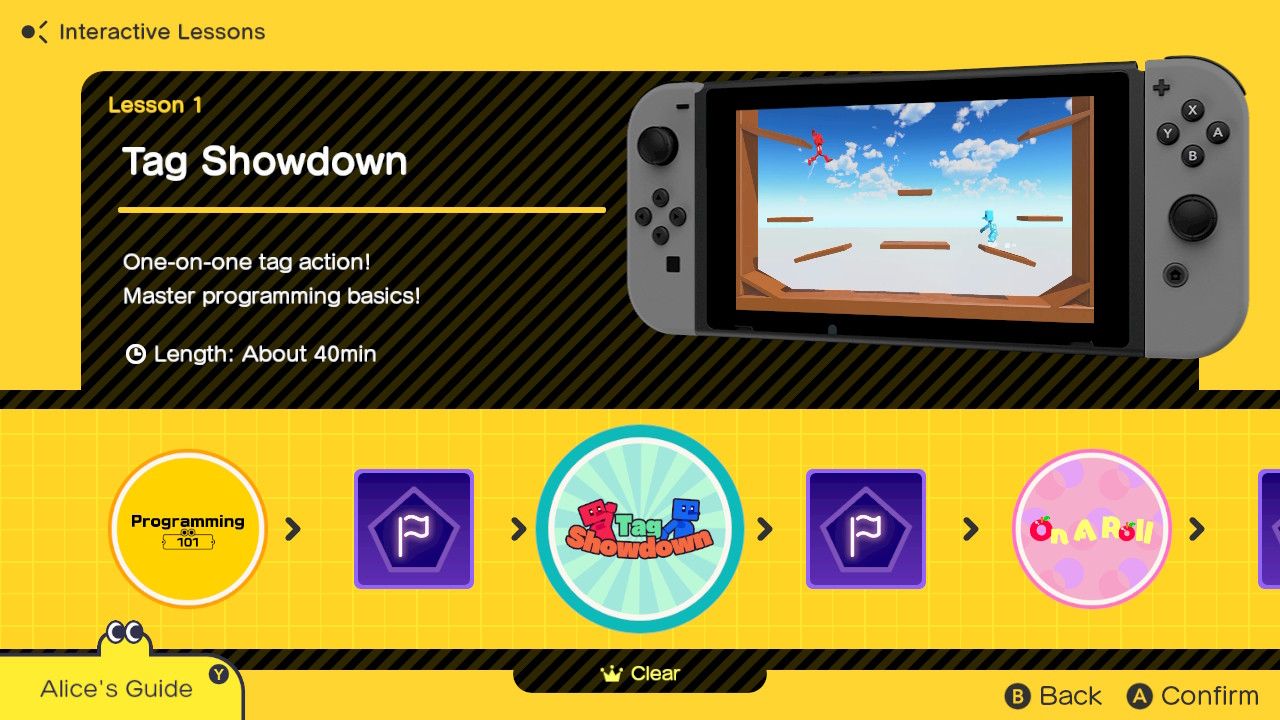 This is a comprehensive game creator – not on the level of Dreams, I’ll admit, but unlike Labo Garage, this has the potential to really impress people. That is, impress people via Twitter clips because you cannot share your creations online, so unlike Dreams and Super Mario Maker, less creative players like me won’t be able to simply leech off the creativity of others. This has to be the biggest problem with Game Builder Garage. I get it, Nintendo doesn’t want you building a stage with a giant penis in the background, which becomes the most downloaded level of all time, but this scorched-earth strategy of having absolutely nothing utterly dulls the potential this game had for me.

Game Builder Garage does so many things right. The personified nodes and simplified layout make it the most intuitive game creator I’ve seen, and the lessons really do introduce you to everything you need to create your own, with a shocking level of freedom. Creative kids who live on designing Minecraft worlds can potentially find their new favourite thing here, but for others, the lack of sheer detail and customisability available here, when compared to the likes of Dreams, is going to be a big disappointment.

In reality, Game Builder Garage feels like the perfect place to build a game prototype. You can create a basic idea, see if it works and is fun, and then maybe take that concept into a real game engine development kit – but not much more. It can truly pique the curiosities of kids, and I hope it does, but it’s launched in a world where it has big competition, and the depth and charm of those tutorials which only Nintendo could pull off so well can’t carry the rest of the experience.