The recent Game of Thrones anniversary was a grim reminder to some, drudging up the controversial ending and questionable writing behind certain characters. But if you look outside the show, you can still enjoy its deep world and intricate character relationships. My way of doing this has been the Game of Thrones board game. The digital version, specifically, seeing as how tabletop gaming is only now just returning to an in-person hobby. A new DLC encouraged me to revisit tabletop Westeros as part of House Bolton, and I’m sorry to say that it’s good to be bad.

The DLC is called A Dance With Dragons, named of course after the fifth novel in George R.R. Martin’s A Song of Ice and Fire books. Just like in the books (and later seasons of the show) this new mode of play reflects a change of power in Westeros. Lannister players begin with control of King’s Landing, Baratheons are all the way on the wall and have Jon Snow on their team, and the Boltons control House Stark. The flow of gameplay itself is also dramatically changed, giving players only six rounds to conquer the most territories or lose the Game of Thrones. The drop in rounds from 10 to six had the biggest impact on me, as decisions made in each individual round suddenly carried a lot more weight. Every point matters since there really isn’t a long game. Losing even one small territory threatened to sink my entire scheme, and in turn, fortifying one seemingly low-value castle kept me in the running. That’s why I came to love playing as the Boltons.

You can still choose House Stark in the Dance With Dragons expansion, but their deck is now stacked with characters from House Bolton. Fans will remember that dark period when the Boltons took over Winterfell, where Ramsay Bolton tortured Sansa Stark and broke Theon until he turned into Reek. Ramsay became the villain everyone loved to hate, as there was really no justification for his cruelty. He wasn’t avenging anyone or making tough choices against a greater evil, he was just sadistic. Which makes using him and Reek in the game a guilty pleasure.

But use them I will, as they have a great card combo. In the Game of Thrones board game, battles are waged with cards representing the various named characters. Each has a different power level and effect, with the highest power winning a match and effects allowing you to further control the battlefield by destroying enemy forces or reshuffling your deck. Ramsey’s skill in in the former, naturally, as he comes at a solid three power and can have four power if Reek is in your hand. Having Reek around also lets him kill three enemy units. That’s a brutal move that pretty much ensures you’ll rip a territory from enemy hands without fear of reprisal.

For his part, Reek is a pathetic zero power, but he lets you return Ramsey from the discard to your hand. Furthermore, if you lose that battle (which you will because of zero power), you get to return Reek to your hand instead of discarding him. So if you play it well, you can keep cycling Ramsay and Reek for several rounds in a row, which is half the game given the six-round format. It does mean that you take some strategic losses, but that’s the nature of the game. It also makes Reek a great card for recouping something on a guaranteed loss. So as much as I hate seeing Reek’s beat-up face, I’m going to keep sending him to the slaughter. 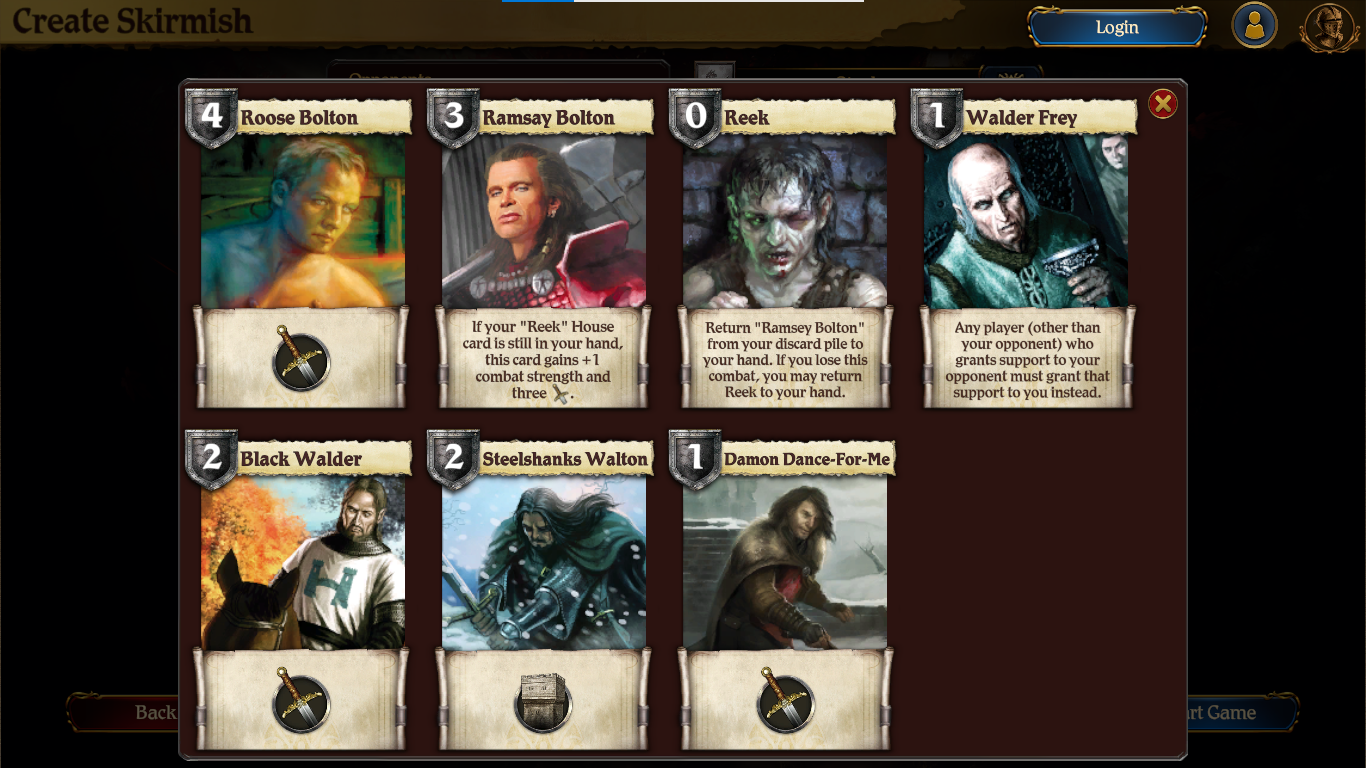 The faster pace and more challenging gameplay of A Dance With Dragons had definitely brought me back to the game. You’d think that fewer rounds would make for a more fast-paced match, but really I spent more time thinking over my moves. Of course, this was versus AI. When playing with other people, it’s a good idea to impose a time limit on turns, which would result in shorter sessions. Like many tabletop fans, I’ve already set up a face-to-face game night with my vaccinated friends. But if your group is still digital, Game of Thrones: The Board Game offers a great way to get some socially distanced scheming in. Just watch out for those blasted Boltons.