Gears 5’s Windows PC version s a master class on how to treat graphics settings and benchmarks, and it’s quite a thing to behold. But it excels in so many other ways as a PC game, even before you dig into these options.

Few of these features reinvent the wheel or introduce new ideas. It all just works the way you’d want it to, from how seamlessly your saved game jumps between an Xbox One or gaming PC depending on where you play, how stable the entire game seems to be at launch in general, and how well Gears 5 works with a mouse and keyboard or a controller. It’s the rare PC game that never feels like it’s fighting me as I try to get everything working smoothly.

Which is why Gears 5 is such a stunning release on PC: It has all the customization options you’d expect from a visual powerhouse, with all the ease of use of a console game. It’s not just about giving the player the power to change what they’d like about how a game looks; it’s just as important to make sure they know how to use those options.

All the graphics options, and data, you need

Gears 5 gives you control over so many different graphics settings that it’s hard to know where to begin to get the game running as well as possible on your system. But the visual options also excel at providing you with the necessary information to intelligently tweak your settings.

Digital Foundry has released a detailed video showing how much better the game can look on a powerful gaming PC than even the Xbox One X, while offering some pointers about how to get the most out of your current rig.

But all those options didn’t feel overwhelming after I got a handle on how to make adjustments and then how to test them. The menus are empowering, delivering a large amount of choice and the information needed to make those choices.

Gears 5 changes what it means to be Gears of War

The first thing you’ll notice is that every setting under “video” lists how much of a change in performance you’ll likely experience if you adjust the levels of that option. Texture streaming, for instance, won’t impact my GPU. It will only cause a minor hit to my CPU, but it will impact my video memory usage to a moderate degree.

Here’s an example of how this looks in the menu itself:

Each option tells you exactly what it does, while giving you some idea of how much it will tax your hardware.
The Coalition/Xbox Game Studios via Polygon

Adjusting the volumetric fog will have a moderate impact on my GPU and VRAM, but only a minor change to what my CPU is doing. If I’m going in there with a goal of improving my frame rate, this information makes it very easy to see where to start, and what options would be a waste to adjust.

But wait, it gets better! Hitting the space bar brings up a sample image from the game so you can see exactly what each option, at each level, is doing to the visuals. The menu tells you that dialing up one of the settings is going to cost you performance, and this sample image will then help you decide whether increasing the effect or detail is worth it to you. The slider below shows what Gears 5’s character texture detail looks like on the ultra setting versus the low setting. 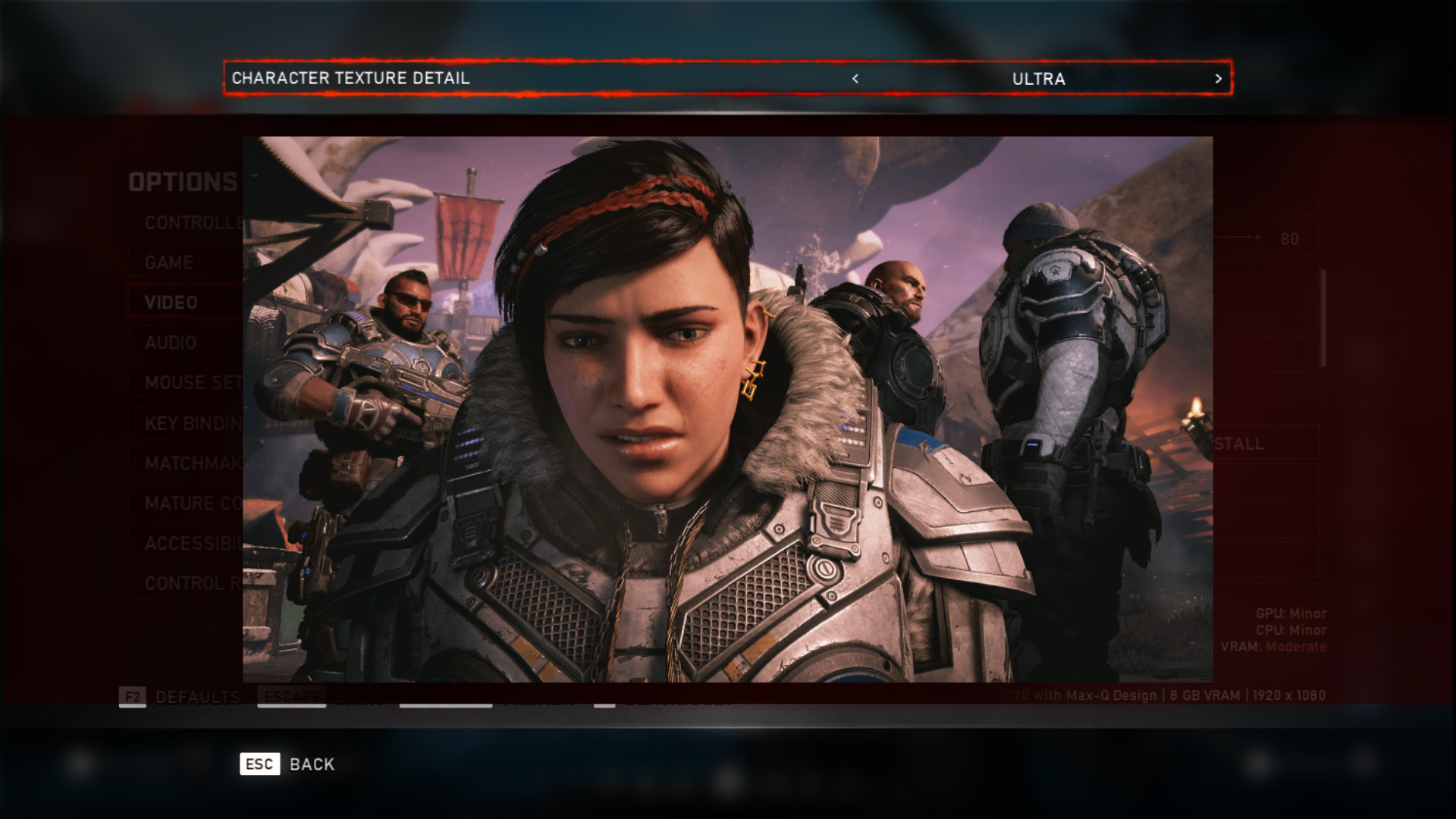 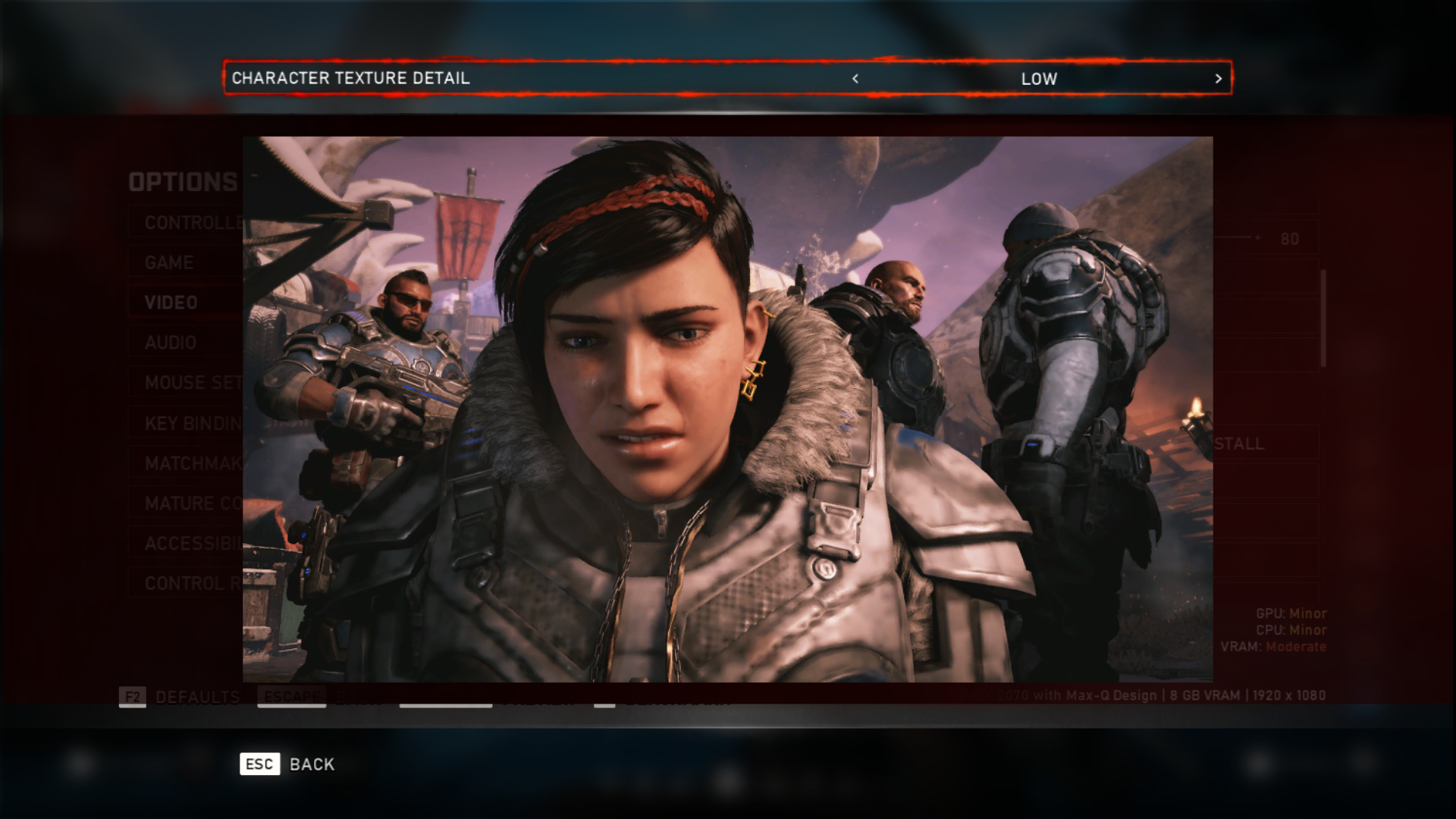 As if this weren’t enough, there’s a built-in benchmarking tool that will show you exactly how Gears 5 will run with the settings you’ve selected, so you can test everything out before you jump into the game. Running the benchmark provides you with a ridiculous amount of data about how Gears 5 is running at your currently selected settings.

Whether you have a new gaming PC and you want to see exactly what it can do, or you want to squeeze the most you can out of an older video card, this screen will give you the means to do so. It’s one of the most comprehensive readouts I’ve ever seen from this sort of built-in benchmarking option. 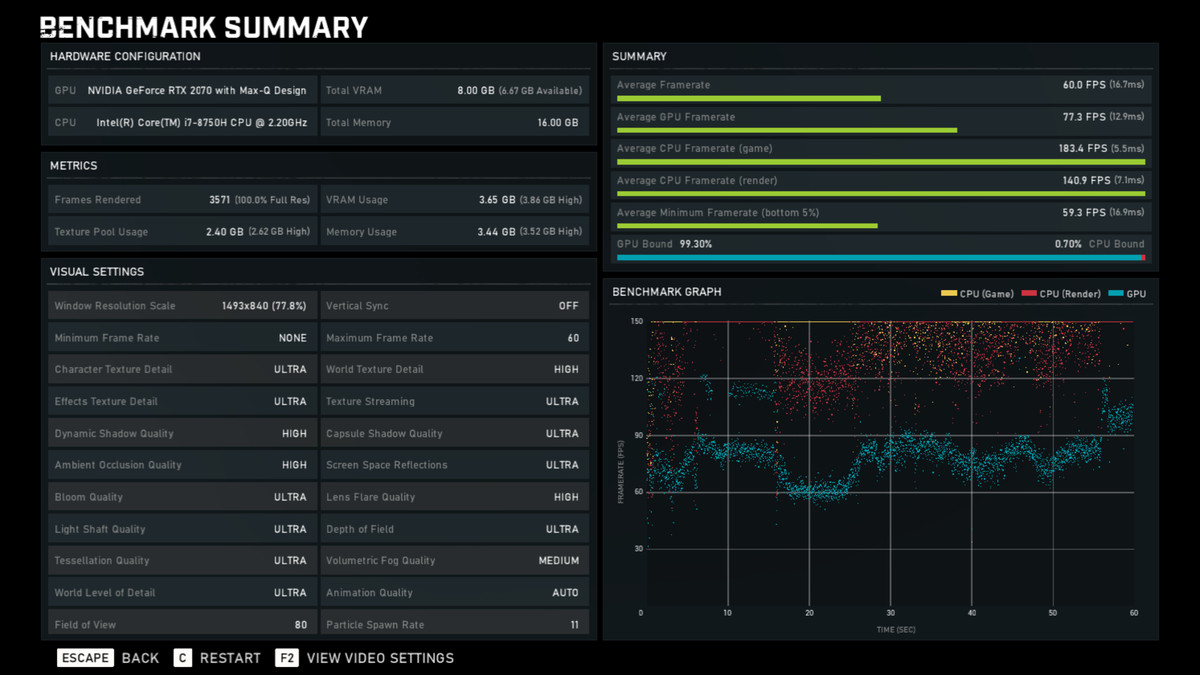 So much information!
The Coalition/Xbox Game Studios via Polygon

This is what I want out of a PC release

Gears 5 offers so many things to adjust when it comes to the visual options that I can’t think of another PC release that gave me so much control over how it looks and runs. And that flexibility is matched by how easily the visual menus convey the necessary information needed to make the most out of each option — to get the game looking, and running, exactly how I would like.

Gears 5 also launched with a huge array of accessibility options, so colorblind players, people who may be hard of hearing or deaf, and those with limited mobility will be able to tweak the game so they can still play and have fun.

These sorts of options require time and money on the part of the developer and publisher, and it’s clear that Microsoft and The Coalition place great value on showing exactly what’s possible for PC releases when players are given this many resources to get the most out of the game.

I hope that other game makers are paying attention, and that they choose to make the same investments in their players.