Before we start, let me say this: I love Adam Sandler.

Yes, Kojima is hailed as the great video game auteur, and yes, Sandler has spent the last handful of years mostly being panned. But forget their critical reception and focus on their output. Both artists are responsible for impressive bodies of work that have earned them blank checks to do essentially whatever they want. And how they’ve cashed those checks is strikingly similar.

Death Stranding, arguably the most anticipated game of this year, is strange — even by the standards of its creator. The game is dominated by cutscenes and other cinematic touches (pulling back the camera in a way similar to Red Dead Redemption 2’s “cinematic mode;” including the actors’ names on screen), and for the first few hours, there’s barely any gameplay, a byproduct of having to do a lot of setup for its post-apocalyptic world-building, which involves alternate dimensions and ghosts. Because of course it does.

Once the groundwork is established, Kojima begins building upon it with alarming rapidity. What once felt bonkers — so many bodily fluids! a baby in a jar! — becomes humdrum by the middle acts. The basic plot, genre, and medium are constantly shifted by dream interludes and hours of cutscenes that feel pulled from an entirely different medium, let alone another video game. 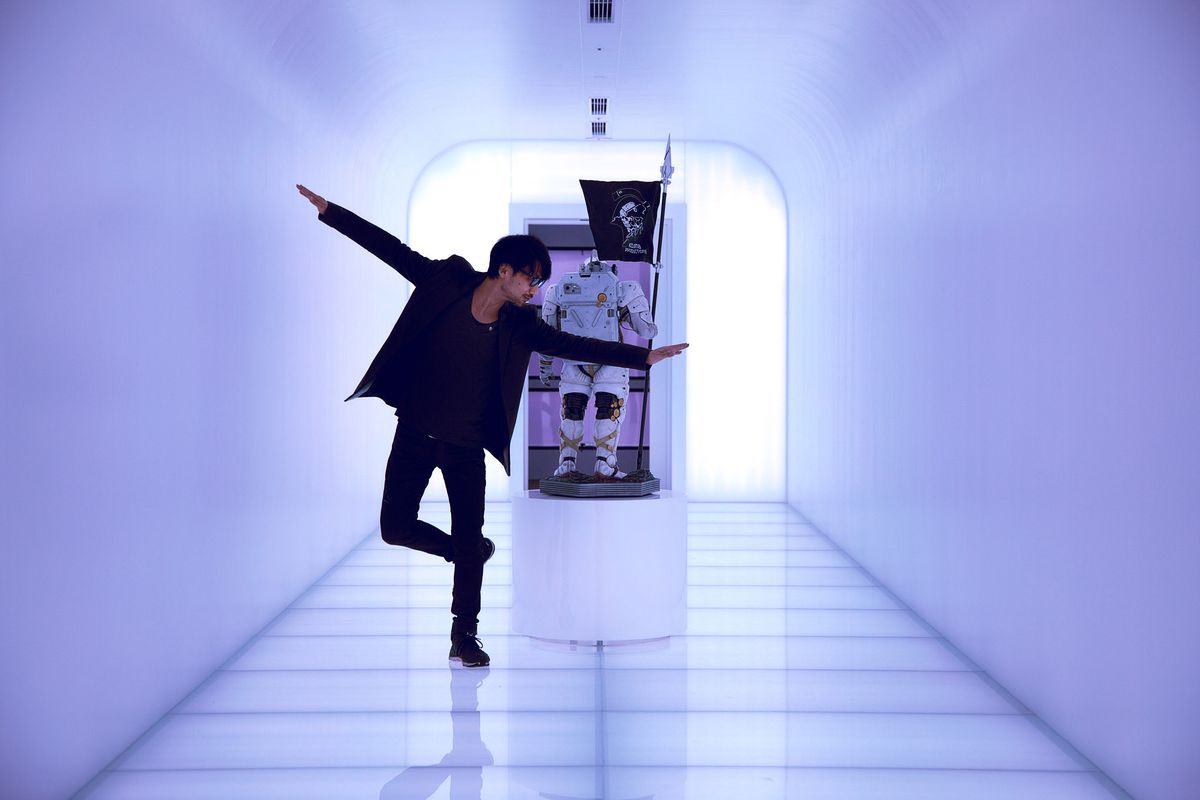 Kojima, at it again.
Liam Wong

The game is equal parts idiosyncratic and indulgent, unfolding at times like a video game version of Kojima’s Twitter feed. Kojima has populated the game with his friends and other “cool” figures (Edgar Wright, Conan O’Brien, Jordan Vogt-Roberts, Mads Mikkelsen, Léa Seydoux, Guillermo del Toro, and Nicolas Winding Refn), furthering the impression that this is Kojima’s world, we’re just living in it.

Through it all, the central drive remains the same: You must travel across the wasteland, delivering packages.

It’s telling that, though his work has always been eccentric, Kojima ultimately had to break from the major video game developer Konami and found his own studio in order to bring Death Stranding to life. The thing that sets the game apart is not that it’s inaccessible or unplayable, but that it’s so distinctly a Kojima work. There are so few concessions to traditional video game design or even marketing — until very recently, the gameplay remained largely secret, as did the story, with trailers only making the game more confusing (and intriguing).

In other words, Kojima has gotten to a point where he’s basically speaking his own language, and has the cachet to expect everyone else will learn how to translate. But isn’t that what Adam Sandler’s been doing, too?

He earned carte blanche off countless great bits on Saturday Night Live, as well as hits like Billy Madison, Happy Gilmore, and The Wedding Singer, and has leveraged the opportunity to make goofing off with friends into a profitable enterprise. His Netflix deal — in which he agreed to make four movies for the streaming platform and said of the deal, “I immediately said yes for one reason and one reason only … Netflix rhymes with Wet Chicks” — spawned The Ridiculous 6, The Do-Over, Sandy Wexler, and The Week Of. He’s also released his stand-up special through Netflix, as well as starring in the Netflix original Murder Mystery.

All of the above projects have united Sandler with his friends — David Spade, Rob Schneider, Paul Thomas Anderson — and most of them have prompted derision. However, they’ve also provided the occasional reminder of why we loved him to begin with, and also given him enough capital to veer off of the B-comedy highway to do movies like Uncut Gems and The Meyerowitz Stories (New and Selected). 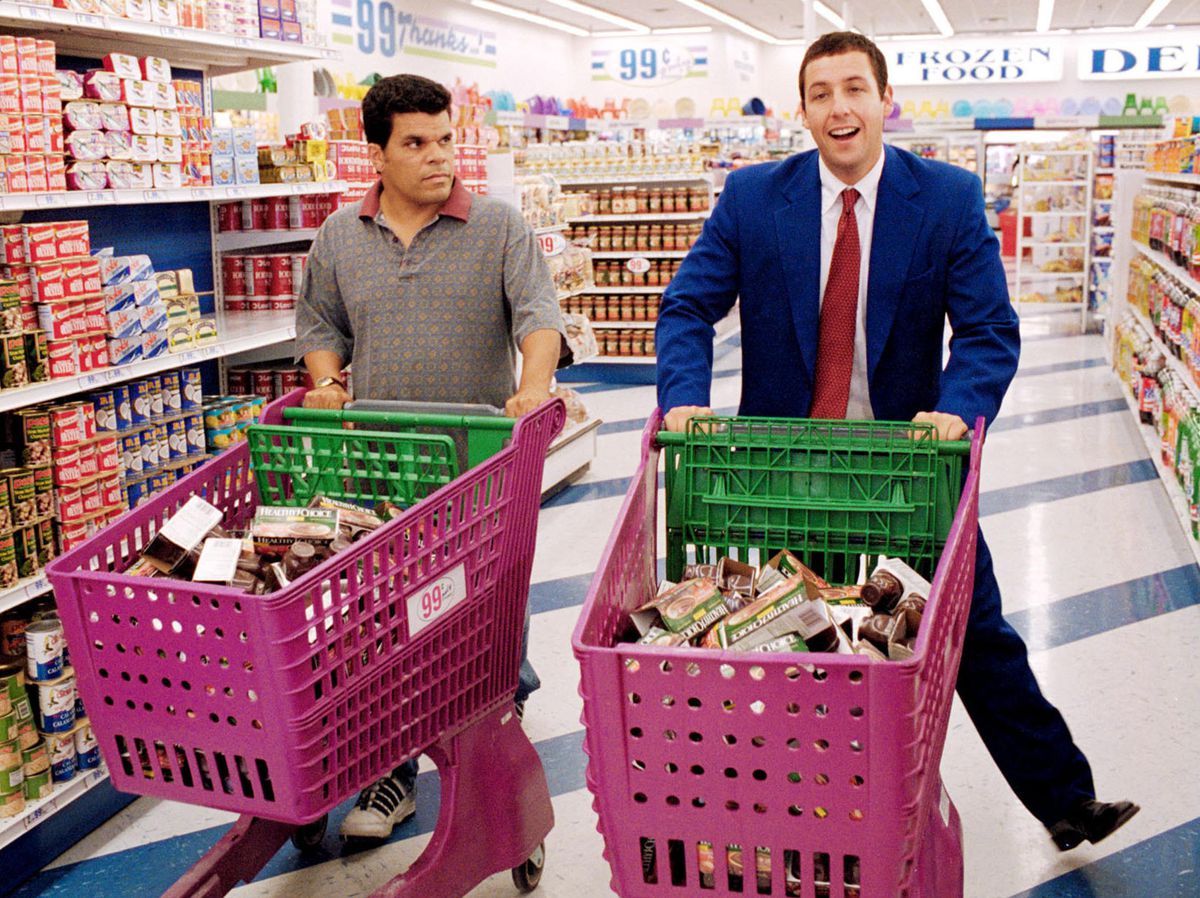 Uncut Gems, like all of the rest of the Safdie brothers’ movies (Good Time, Heaven Knows What), is a difficult, stressful movie to get through, as Sandler’s jewelry store owner battles time itself to try to make a string of investments and bets work out. And, like Death Stranding, it’s a piece of art that demands the audience adapt to its pace and tone. But the risk that Uncut Gems’ high intensity and strangeness might put people off is one that Sandler can and will take.

Both Sandler and Kojima are now in a position to take these kinds of artistic leaps. After having found success at relatively young ages, they’ve capitalized on their fortune by building upon their respective bases (comedies relying on Sandler’s man-child schtick and the Metal Gear oeuvre). Now, they’ve enough respect and value within their industries that the world has become their oyster. They can take huge creative risks, while still working with their friends and making mountains of cash.

If this seems like a stretch, let me add one more detail: Both Kojima and Sandler unapologetically delight in life’s absurdity. That peepee, the poopoo, and such. The excrement grenades in Death Stranding wouldn’t feel out of place in a Sandler movie. On the other side of the equation, the best of Sandler’s work taps into an earnestness that’s abundant in Kojima’s work, whether it’s his ode to the late Chris Farley in his Netflix stand-up special or the genuine affection behind his impression of his real-life manager in Sandy Wexler.

To put it in Death Stranding parlance, Kojima and Sandler are reflections of each other, like the populace of the game’s post-apocalyptic landscape and their ghostly BT versions. They are connected.