The world of JoJo’s Bizarre Adventure focuses on the Joestar family for far too long. It is, after all, JoJo’s Bizarre Adventure, so it makes sense that this titular adventure would follow Jonathan Joestar and his descendants. However, once you’ve caught up to Part 4: Diamond Is Unbreakable, you start to see that there’s more to the world of JoJo than just one family and a cursed bloodline. Josuke Higashikata, Part 4’s protagonist, starts to take a back seat while his pals and acquaintances step into a more central role. The growth of the initially shy Koichi Hirose into the confident and assertive young lad we see at the beginning of Part 5 is emblematic of that shift. Koichi is, arguably, more of a protagonist than Josuke ever was, with more of the traditional shounen story beats associated with him as opposed to the rest of the cast. This was where it became clear that the world of JoJo’s Bizarre Adventure deserved to be explored further, away from the Joestar family – and with Netflix’s Thus Spoke Kishibe Rohan, we finally get just that.

Stand users – those who can harness the abilities of mysterious personified psychic entities – are attracted to one another, and are certainly not limited to those friendly with the Joestar family. So, it’s about time that we are finally seeing more from this odd world of hostile psychic beings that isn’t related to a tiny cast of characters and their extended relations. Kishibe Rohan’s absurd antics make for a good way to tell those stories – and that brings me to the first episode of Thus Spoke Kishibe Rohan, which is everything I wanted from a JoJo spin-off. 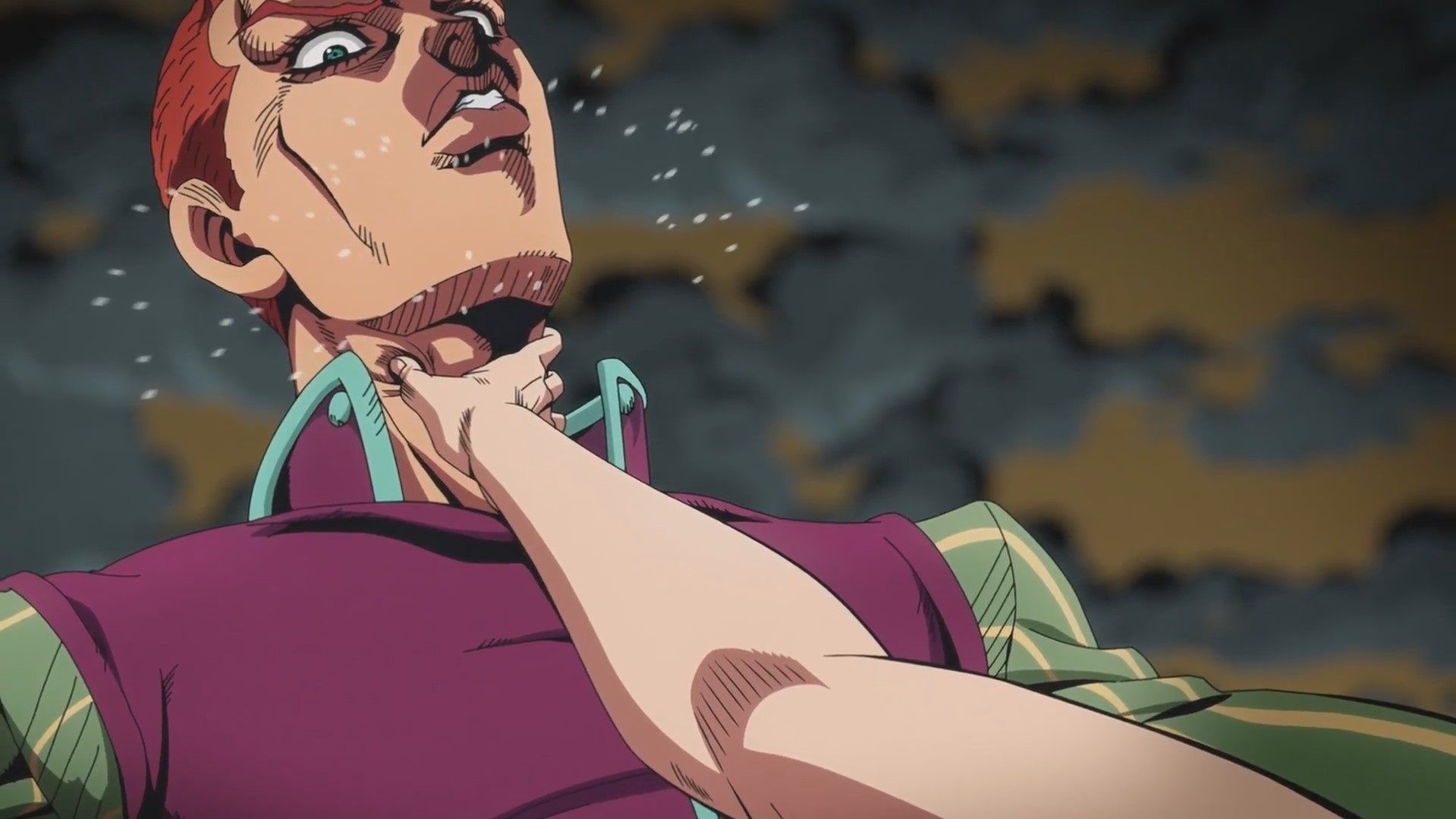 To be incredibly brief, the first episode of Thus Spoke Kishibe Rohan is about one incredibly lucky man who deserves absolutely nothing, and tells Rohan all about it whilst sat in a confessional booth. This man meets a homeless person, then promptly treats them like garbage, putting the starving man to work, and swiftly killing them with some literally back-breaking labour. The only upside to all of this is that he is now forever cursed by an antagonistic Stand that swears to take revenge at the happiest point in the man’s life.

Fast forward many years and the man becomes absurdly wealthy thanks to an inheritance from a relative and, um, becoming a corn magnate. As in, he sells Corn Flakes, popcorn, and corn chips thanks to the corn he grows on the land he owns through his inheritance. I told you it was bizarre. He lives in a huge house, has a small army of live-in servants, is married to a supermodel, and has a daughter he loves very much. One day while walking the streets of Venice with his young daughter, he sees her smile and earnestly believes it to be the happiest he has ever been. That’s when the Stand strikes.

Taking the body of his daughter, the Stand returns, plunging her young fingers into and through the skin of his neck before giving him a challenge that can, possibly, save his life. Flick a piece of popcorn high into the air, above the nearby streetlights, and then catch it in his mouth, three times in a row. Failure results in him losing his head. He fails, but that’s not really the point here: what fascinated me was the popcorn. 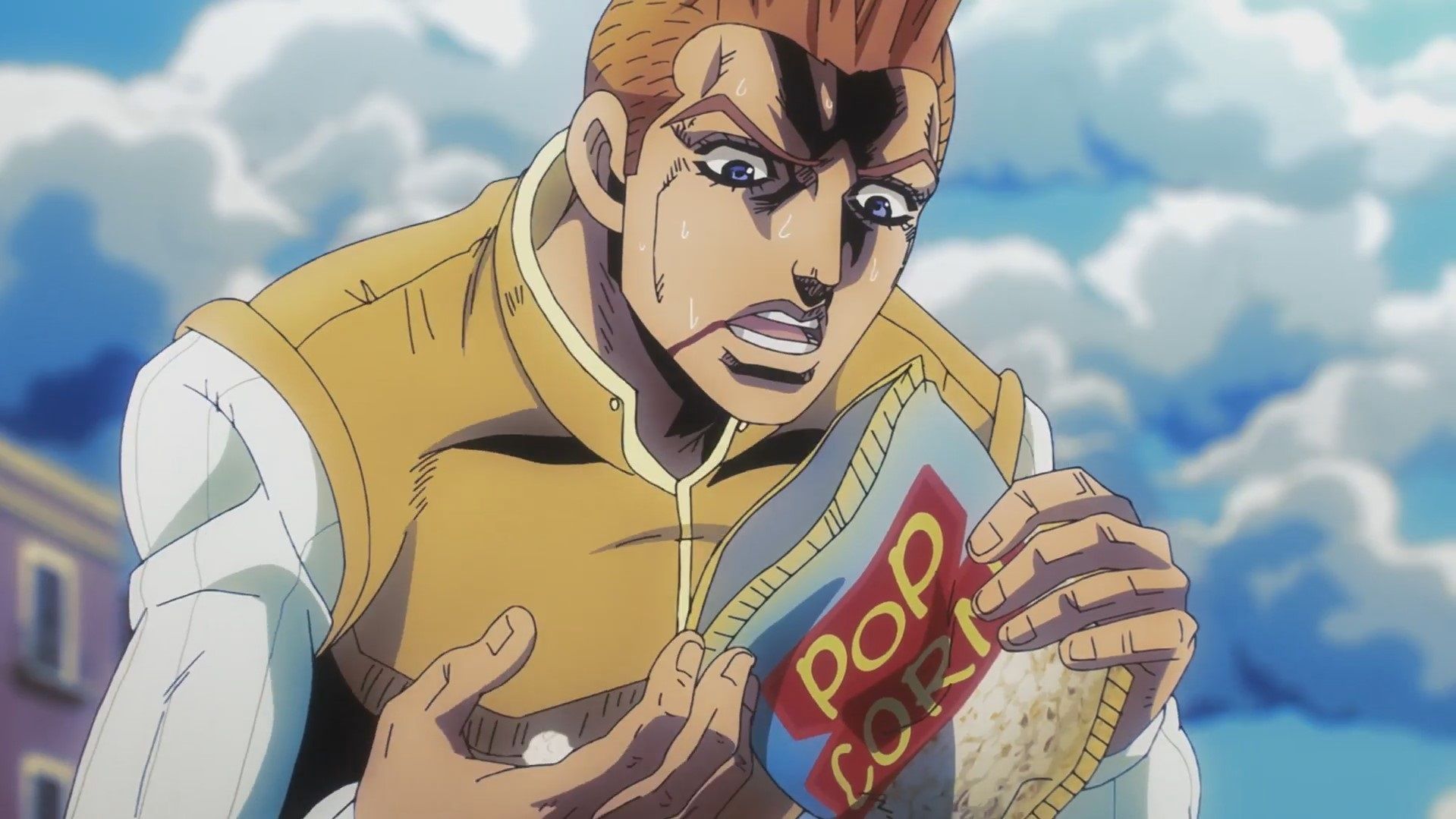 The Stand throws the bag of popcorn at the man and tells him; “You can see your destiny through a trivial, little thing.” The task is trivial, yes, but the stakes are high, and the popcorn is emblematic of everything this man is. He’s a corn magnate – as ridiculous as that is – and this symbol of his success is also the harbinger of his undoing. It feels to me like a postmodern Aesopica – Aesop’s Fables – and the untimely undoing of once humble, but often selfish characters within. When a goose lays golden eggs the owners slice it open in search of gold surely hidden inside, only to find nothing. This unrivalled greed has always been an undeniable sin, but it takes on a different flavour when under capitalism.

This selfish man sitting in the confessional booth is here not because he truly feels guilty, or sad, but because he wishes to escape the fate he has created for himself. He felt no empathy for the homeless man he swiftly worked to death, and he never thought twice about the servants he had in his charge. In fact, he didn’t even seem to care for his wife much; he just wanted a supermodel, because men are supposed to want these things. This man is the epitome of desire, using any means necessary to get what he wants, or what he should want – and the means here was corn.

His success was a lucky break, yes, but it also came at the cost of the lives and well-being of those around him. And now he stands in a park in Venice, praying that he can flick some popcorn into the air and land them in his mouth, all while pigeons swirl around him and the twisted visage of his daughter growls threats to his life. On the third attempt, the sun breaks through the clouds above, blinding the man and causing him to fail his final popcorn catch. Almost an act of divine intervention. The man’s head comes off, fulfilling the threats the Stand made years earlier. 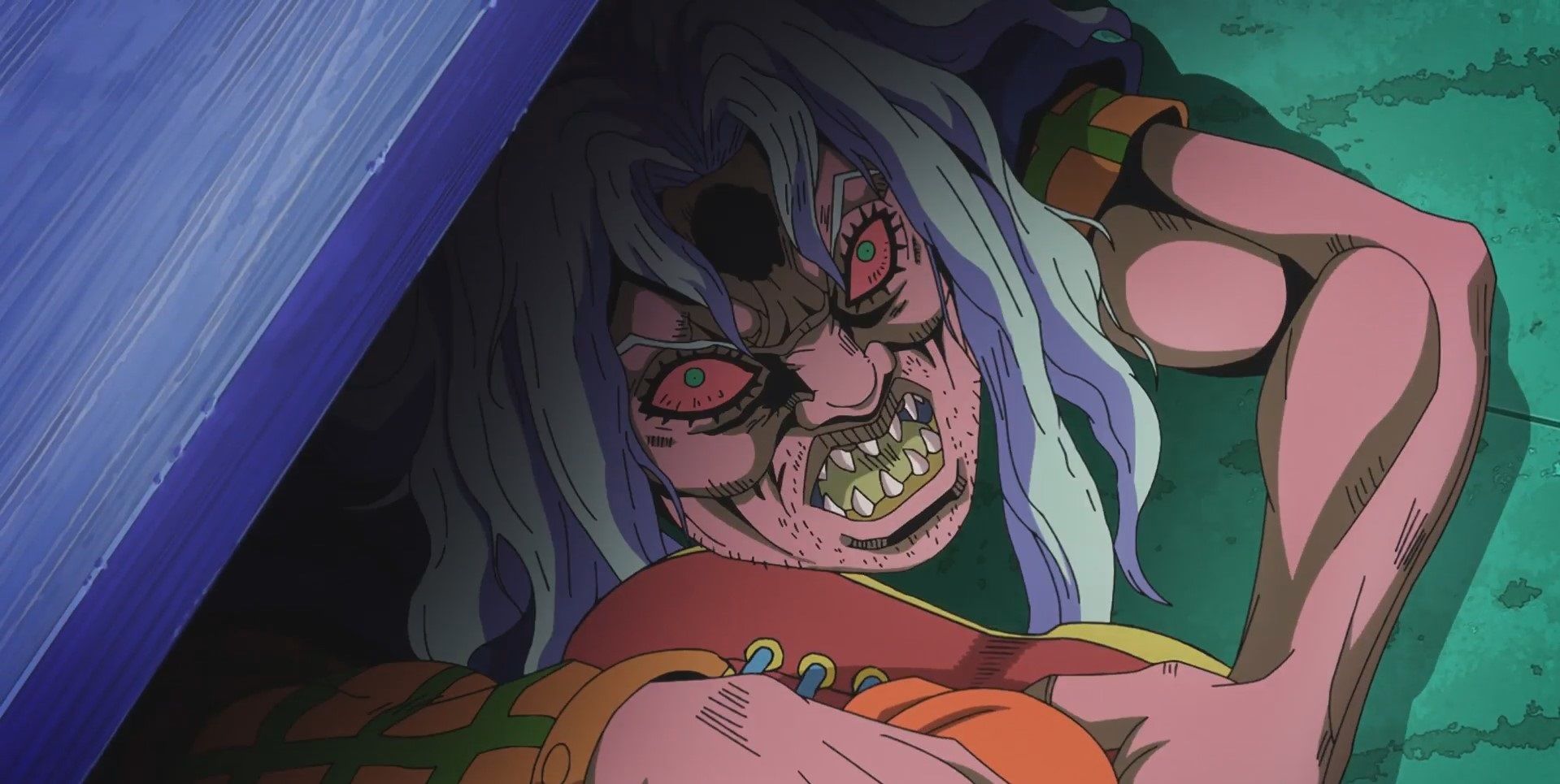 This is when Kishibe Rohan realises that this story, being told to him by the man himself, is impossible. He is dead. Or, should be. And that’s when he reveals that he is alive and well, because he is the same as he has always been: a cheat, with zero empathy for those around him. He used his vast wealth and his legion of servants to quite literally have someone else take his place, forever. The one that has seemingly acted as a corn magnate (sorry I cannot get over this) for years and raised his young daughter is actually a servant that has undergone plastic surgery to look like his master, and the master did the same so he could blend in amongst the servants: a trick so intricate it even had the stupid psychic Stand curse fooled. I also have no doubt that this is where Hideo Kojima gleaned Metal Gear Solid 5’s big twist from.

Just like Aesop’s Fables, this short, self-contained story has a powerful message, but one that Aesop could never have predicted in a world ravaged by global capitalism. The powerful abuse others, the powerful feel no empathy, and the powerful will use those around them to get what they want, even at the cost of their own happiness. But ultimately, no matter what, the powerful do not feel the brunt of their curse. They do not have to face the consequences of their actions. They just let those around them do it for them, and keep walking forward, living their life. As the man rises from the confessional booth and leaves the church we see the headless servant, bearing the man’s old face, crawl behind him, alongside the homeless man from years before, while the corn magnate himself strolls out, unscathed, with a face that isn’t even his own.

Consequences exist, but unlike in Aesop’s fables, the consequences rarely fall upon those who deserve them in the modern world. They just get pushed onto others who are forced to writhe in the background, cursing those that put them there, but never seeing justice. A bizarre adventure indeed, but one that is more poignant than ever. 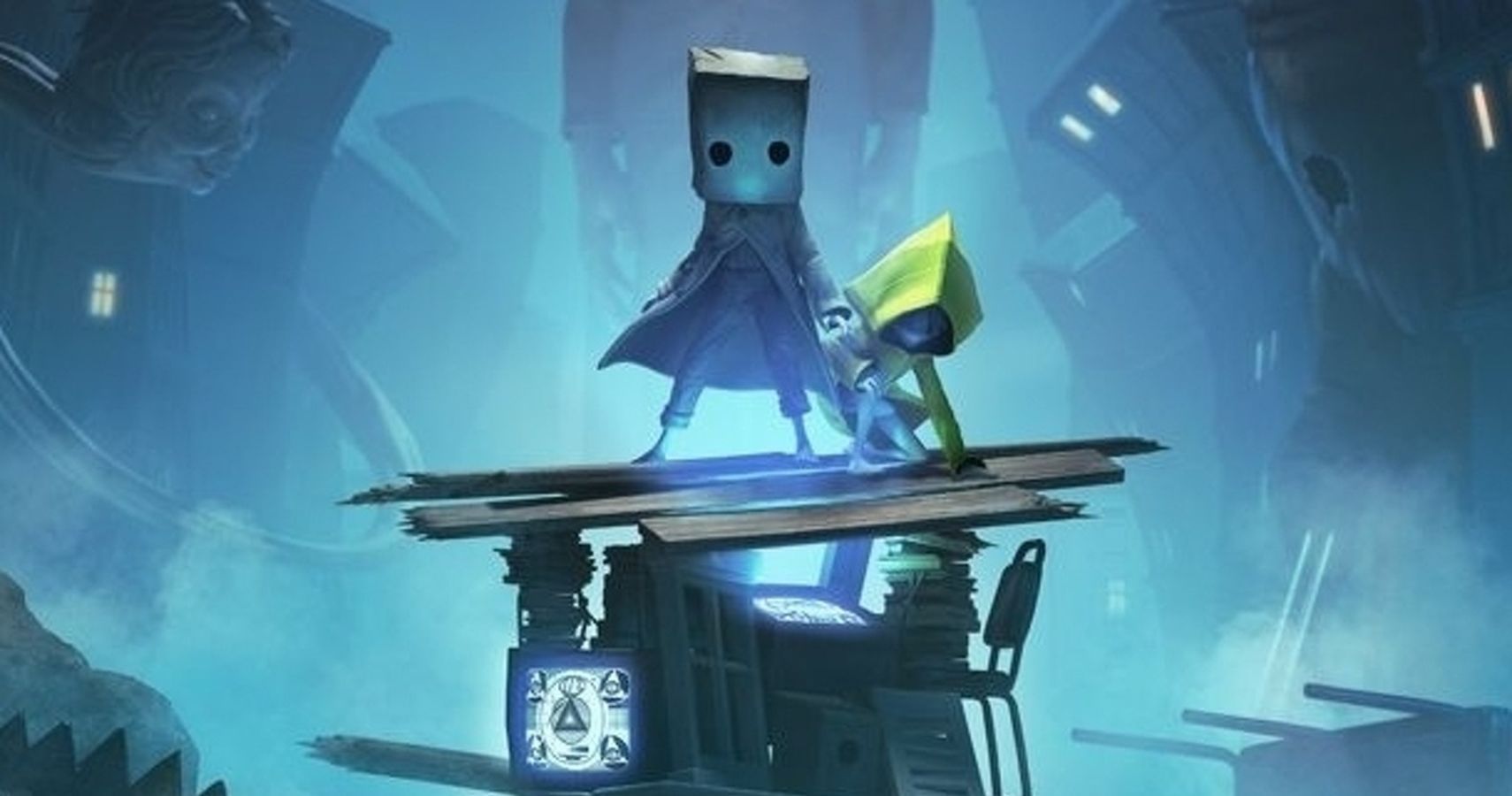