In Untitled Goose Game, an avian adventure from indie team House House, and the first title published by Panic since 2016 hit Firewatch, I play as a goose. Naturally.

The game has a Tintin color palette and the drollness of Archie Comics. A joke is somebody wearing a funny hat, or having their brassiere stolen off the drying line. My goal is to cause trouble.

I have a little notebook, bullet-pointed with chaos-causing to-dos that start simple, like getting into a garden and having a picnic. Soon enough, I’m committing multiple counts of theft, destruction of private property, and home invasion.

Notably absent from my goosely crimes, however, is murder. Or weapons. Or violence of any kind, really, unless you consider tossing someone’s slippers into a pond an act of violence, which, honestly, would be fair.

To someone only casually interested in video games genre, this all might sound reasonable, a stealth game almost entirely about stealth, one free of human slaughter. But it’s practically peerless. The majority of “stealth games” build toward bloody, flashy, cinematic kills. We play as assassins and hitmen; we wield silenced pistols and concealed blades.

Though some genre entries allow for “no-kill” runs, or turn down the blood to a trickle, most include an armory’s worth of weapons and offensive gadgetry. As a result, the stealth bits of stealth games are truly delayed gratification; they’re the words, and violence is the punctuation.

A stealth sequence in Untitled Goose Game, on the other hand, builds to an angry old codger falling on his bum, because I sneakily pulled a stool from under his arse. It’s not revolutionary, but it’s refreshing! 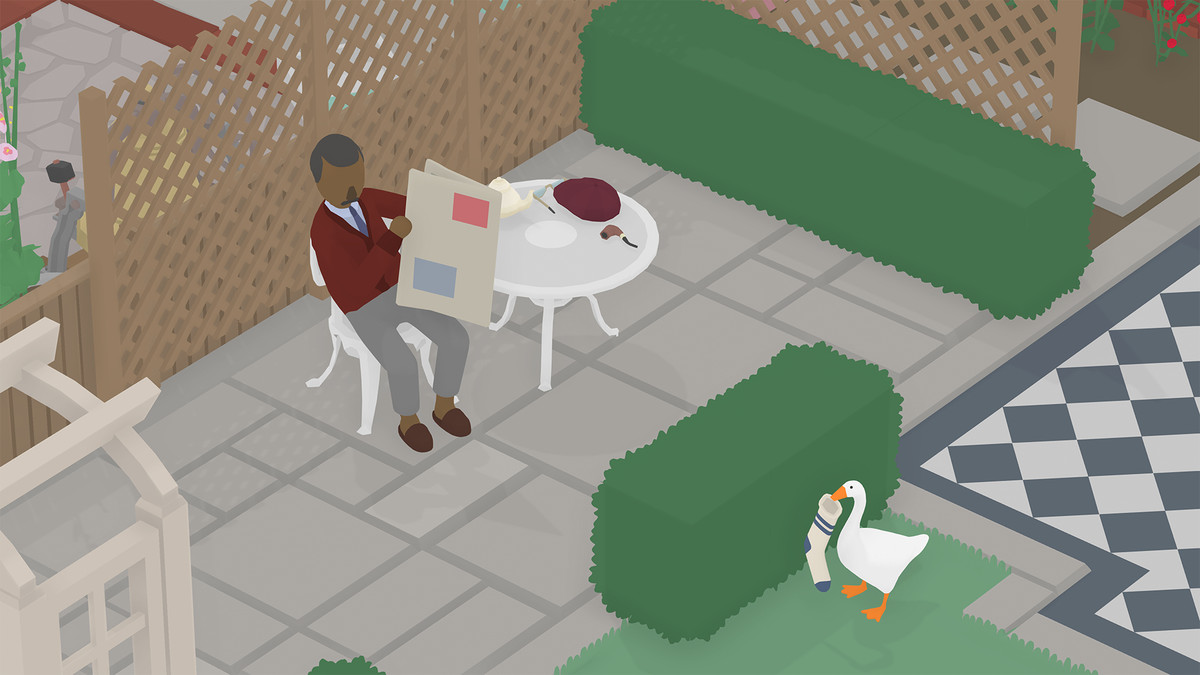 Please forgive my Britishisms, but the game was made in Melbourne and the vibe is distinctly United Kingdom, favoring pratfalls and slapstick in the mode of Mr. Bean. As the goose, I squat, flap my wings, waddle, bite, and honk, the latter being particularly good at startling folks when they’re trying to sip a cup of tea on the patio or throw a dart at the pub.

House House has done an admirable job coming up with dozens of things for a goose to do with its limited abilities, though most fit into two traditional stealth genre buckets.

Bucket one: I sneak into a guarded zone (like an outdoor shopping area overseen by a clerk) and sneak out undetected with any number of items.

Bucket two: I wait for a character to complete their endlessly looping routine so that I can drop a bucket on their head at the right moment — or whatever other trouble I’d like to cause that relies on getting an unsuspecting victim to be in the right place at the right time (or in their case, the wrong time). 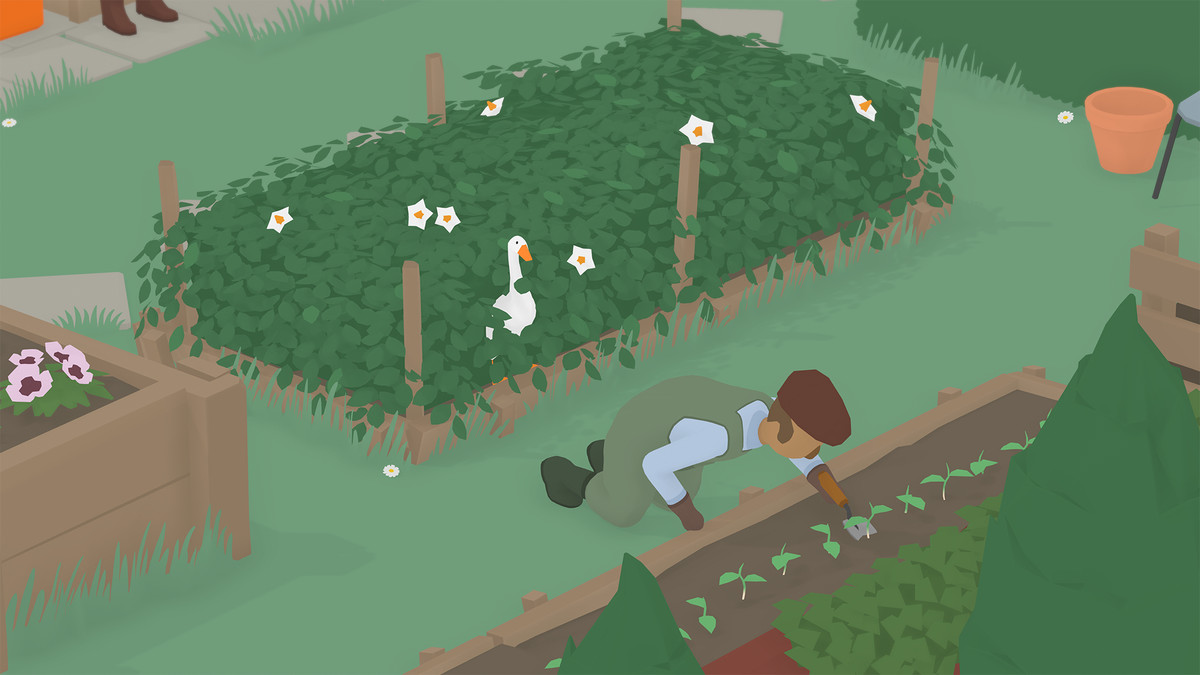 In so many stealth games, this second bucket would contain the murder missions, in which I must first figure out what the game wants me to do, then wait patiently for a chance to test my theory, and then either succeed, repeat the test in case of human error, or try a new theory.

In a Hitman game, I might steal a waiter’s disguise to enter a restaurant’s kitchen, where I can spill oil so that my mark, on their way to the restroom, slips into a deep fryer. By comparison, Untitled Goose Game has me waiting for a groundskeeper to check on some veggies so I can filch his keys.

Played solo, this can be a bit dull. It’s not that Untitled Goose Game needs senseless acts of killing and splashes of human viscera to compete with other games. It’s that, compared to the competition, it’s all a bit too simple. While my goose is adorable, he’s not particularly skilled in the arts of espionage.

The comparison that comes to mind the more I play Untitled Goose Game is the adventure genre of the 1980s and early 1990s, which includes many games that at the time were very charming and funny, but today, feel a little rigid, like the actual challenge is trying to parse what the designer thinks is witty and wry. I’m not solving puzzles so much as I’m solving their creators.

The hours of Untitled Goose Game I’ve played, like the game’s title, feel a bit unfinished. The game includes a reset button, undoing the chaos. Sometimes I used this to get a fresh start on a puzzle, to see it with clear eyes. Other times I used it because I’d gotten stuck in the world’s geometry, trapped on the wrong side of a fence, unable to complete my notebook of mischief. And that notebook itself can feel a little confining, often repeating similar challenges. 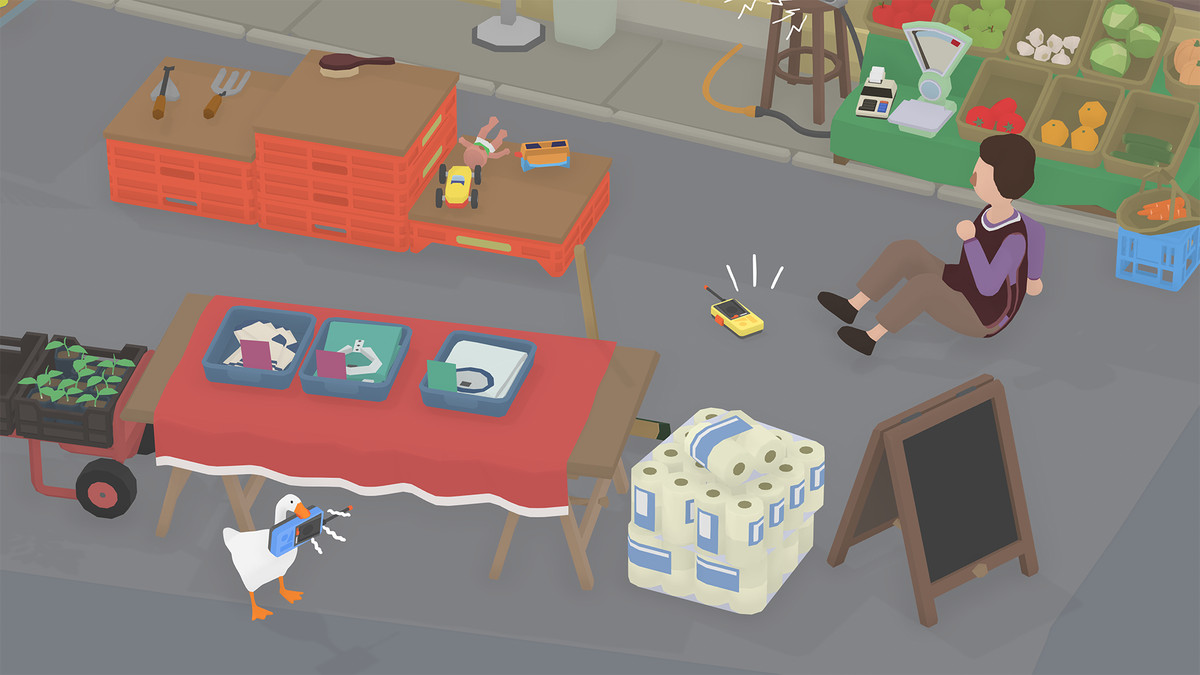 However, the game is enormously fun with a group of friends. It has a winning art style, and the piano, which reacts to the goose’s every moment, scores each scene like a Chaplin routine. Waiting for characters to walk their routes so that I can test a potential solution to a new puzzle: kind of frustrating. Waiting to test friends’ theories, seeing whose solution is wrong and whose is right: very tense!

And though it can be slow going waiting for some puzzles to play out, waddling about the world is a delight. House House has designed a lovely small town, the little stages connecting into an open world reminiscent of, and I know this is silly to say, Dark Souls. Every time I think I’ve traveled far, I open a side gate that takes me back to one of the game’s central hubs or arteries. I still have more Goose Game to enjoy, but I have decided to save what’s left for a group gaming session, so that I can explore this world with company.

The game has a knowing charm that benefits from its roughness. Yes, there’s not a lot to do, but that is, in some way, the point. Plenty of other games are burdened by busywork. And yeah, this one’s a little busted and repetitive at times, but it’s also the first game I can remember that lets me solve problems (or cause them) as a goose. Not an assassin or a spy or a killer. A goose.

Which is why I, gymnastics-style, grade on a degree of difficulty. A violent stealth game starring a scruffy generic soldier-type? That’s on the bottom of the scale. For decades, game makers have worked tirelessly to uncover every way to make killing fun.

But there’s little precedence for Untitled Goose Game. In each stage, I can sense the creators stretching, with great effort, to find new, fun things that don’t fall on old habits. The magic, when it really materializes, is punctuating a perfectly executed stealth maneuver with a quack.

Untitled Goose Game is now available on Mac and Windows PC via the Epic Games Store, and Nintendo Switch. The game was reviewed using a final “retail” Switch download code provided by Panic. You can find additional information about Polygon’s ethics policy here.