In the ruins of a tribal civilization, only wildlife remains, growing and moving through abandoned spaces that hint at a past of conflict and hubris. By placing you in the paws, wings, and fins of various animals, the game pushes you to consider what nature can teach humanity, and the need to rethink entrenched beliefs and assumptions.

It’s a clear and coherent theme. If only the experience itself were so assured.

In the world of Lost Ember, deceased humans supposedly ascend to a heavenly realm known as the city of light, unless they weren’t righteous enough in life. Those who fail to rise are reincarnated as animals instead. You play as one such reincarnation, a wolf, who befriends the lost spirit of another dead person, a floating, chatty ball of light that’s apparently destined for the afterlife but can’t quite get there.

For some reason it seems you can help, so you set out together, traveling cross-country, hoping that you’ll both find a way to enter the city and ultimately be accepted.

For the most part, this is a sightseeing and history tour. As with something like Journey, don’t expect puzzles or combat; just wander and explore the countryside from your behind-the-beast perspective and find the path forward. The twist is that you have to navigate all kinds of terrain, from grasslands and clifftops to rivers and mountains, and your running, jumping wolf is only so versatile. You’ll need help from other animals.

Fortunately, you have the power to possess any creature you see, whether mammal, fish, or bird, giving you control of their unique forms and abilities to get past certain obstacles before you revert to your lupine body.

Neither of the duo can recall their previous lives at the start of this adventure, so to advance you also need to uncover memories. Plumes of red smoke on the horizon signify sites of significance to your human self. Make your way over, and you trigger a scene from your past, played out as a series of still images. Then, a transparent barrier around the area cracks and you can travel further. This means you witness both the personal and social events that led to your death, while learning about a civilization that no longer exists. You’re not just gaining insight into who you were, in other words, but also the world in which you fit in.

The mysteries of why your character was reincarnated instead of ascending, the identity of the lost spirit, and why unlocking your memories helps him progress, make up the bulk of the game’s story. It soon becomes clear that this is a tale of intertwined fates, and the nature of your connection to the ball of light is one of Lost Ember’s driving forces.

Even more intriguing, though, is how the memory scenes overlap your morally questionable past with layers of social context to continually shift your perspective of who you were. The same thing happens in a more direct way when you begin taking over the forms of other animals, which literally lets you look back on the human world from multiple points of view.

It’s a shame that everything around this neat narrative structure feels overstretched. Lost Ember’s other main draw is its sense of scale, and at times it is impressive. Over this six-hour trek, you cover miles and miles of continuous landscape, with green fields giving way to hills, cliffs, and plateaus, which cascade into deep rivers and underground caverns. As you cross great valleys, swim over waterfalls, or emerge from dirt-filled tunnels into sunlit vistas, there are certainly moments of wonder. 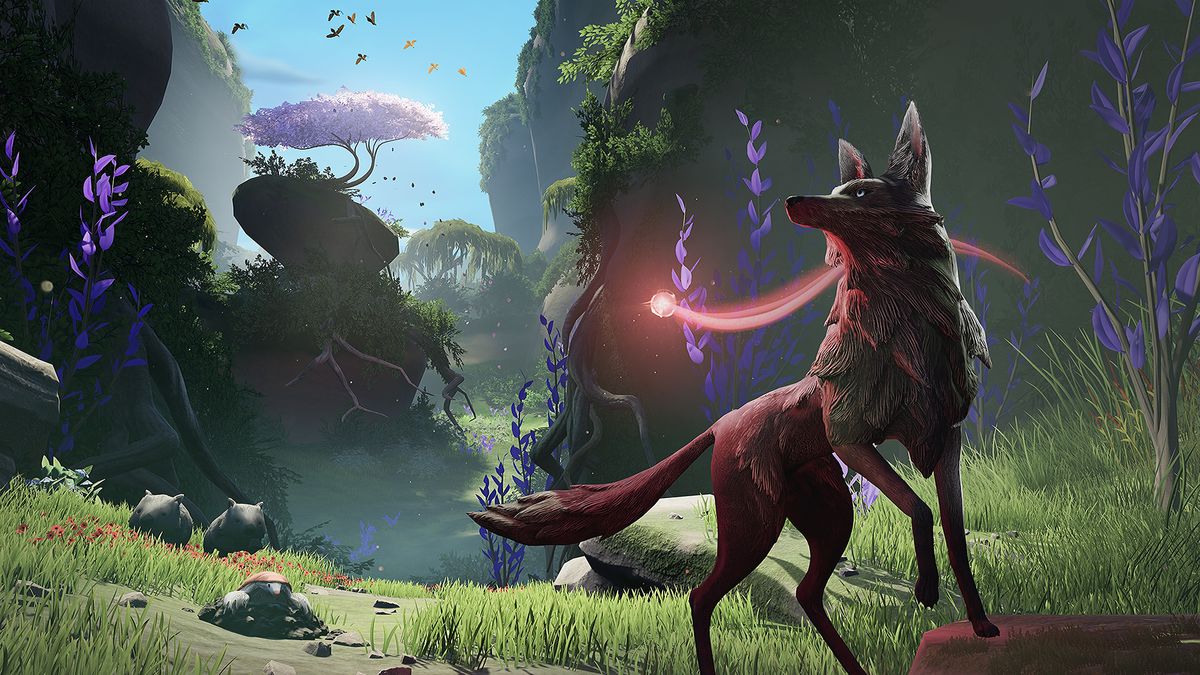 But the breadth and openness comes at great cost to detail and performance. Basic geometry and muddy textures do a disservice to some potentially spectacular views. Features of the land pop in at close range, and the screen usually freezes for a moment when a new piece of landscape loads in.

The animals you control, meanwhile, seem to float above the ground rather than run along it, bouncing and sliding off low walls with weightless animation. The characters and scenery just barely function together, rather than existing in a state of natural harmony.

These technical issues matter in a game that’s all about sensations, where the hook is in finding different animals and test-driving their rolling, tunneling, or hovering movements to get where you need to go. Whether running as a wolf, hopping rocks as a mountain goat, or leaping upstream as a fish, the feeling of being wild and free is essential, but too often those intentions clash against the game’s rough edges, undermining its flow.

There are around a dozen types of animals in Lost Ember, but they’re introduced slowly, so the first half of the game involves a lot of repetition. And when each animal is so simply designed, with just one unique trait that helps you progress — armadillos burrow under walls, ducks glide over gaps — they’re only briefly entertaining. It’s disheartening when you spot a bunch of creatures scurrying around ahead, only to realize it’s yet another gang of wombats, whose only real use is squeezing through narrow passageways.

There’s no real challenge or sense of discovery. You just see an obstacle, then look around for an animal that seems like it would have a way around, over, or through it. A rickety camera and invisible walls add to the frustration.

Lost Ember works better when you focus on forward momentum, in part because the promise of new horizons is more inspiring than trying to investigate the current one. But there’s also a simple pleasure in quickly covering space, whether tearing across the grasslands in wolf form or rolling down hills as a wombat, and the seamless transformation between creatures is sometimes used to good effect. A sequence, for instance, where you swoop through a huge canyon as a parrot and then emerge onto a desert plain among a herd of galloping buffalo, joining them to take part in the charge, is a real highlight.

Such impressive moments are more frequent in the back half of the game. The range of environments increases, dotted with ever larger, more fascinating human structures, often framed by striking uses of light and color. New animals are introduced at a faster rate as well, without being overused (although the wombats never cease). There are even a few animals, such as tortoises, that seem to exist merely to offer a brief distraction. Even if they don’t do much, they make the environment feel more like an ecosystem that’s worth looking around.

The story similarly gathers pace in the final hours, with a suitably touching conclusion, and by the end of Lost Ember it’s much easier to feel fondness toward the entire experience. At times it does replicate the joys of Journey, painting emotional strokes with its locations, music, and movement, and the marriage of play and themes bolsters its narrative impact.

But Lost Ember stutters and lurches along thanks to its technical limitations, and takes way too long to get flowing properly. Too many glitches, too few truly memorable moments, and an overabundance of wombats prevent the game from becoming a truly majestic beast.

Lost Ember is out now on PlayStation 4, Windows PC, and Xbox One, with a release on Nintendo Switch coming in the future. The game was reviewed on PS4 using a final “retail” download code provided by Mooneye Studios. You can find additional information about Polygon’s ethics policy here.