Now that Monster Hunter took time to go off and explore a new world, it’s back on more familiar grounds. Monster Hunter Rise sees the series return to a portable console, something that helped cement its popularity and endurance. However, the series didn’t forget the new tricks it learned during its last excursion. Rise keeps the quality-of-life adjustments that streamlined resource gathering, and adds some news ones. It also keeps the beginner-friendly tools while adding monster variety that veteran players found lacking in Monster Hunter World. I do miss some of World’s scale and spectacle, but Rise succeeds in being Monster Hunter at its addicting best. 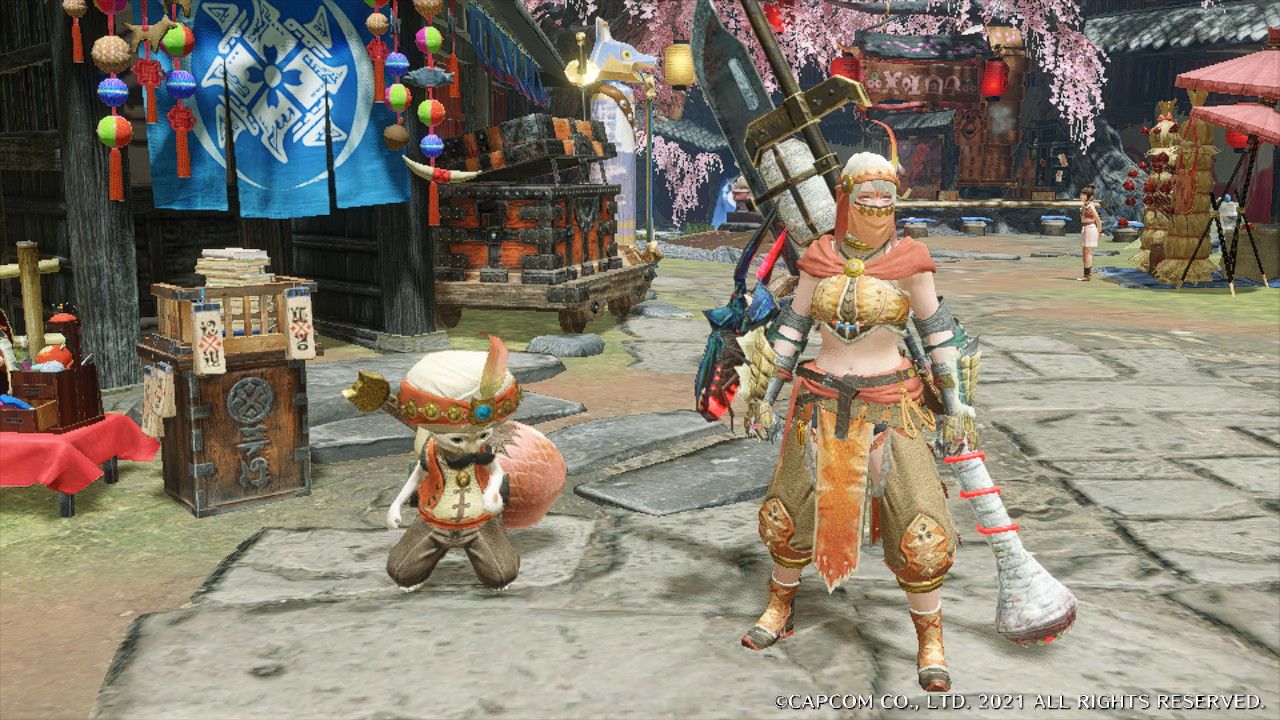 The title screen immediately sets the scene thanks to the vocal talents of Minoto and Hinoa, the twin shrine maidens who greet you with a Japanese song. This carries over into the main theme you’ll hear in town, and really everything about the hidden hunter village of Kamura. The feudal architecture, ink brush art for loading screens, and shinobi aesthetic in the clothing all come together to create a rich setting. It’s a great example of how a firm art direction can make up for the technical compromises of playing on a less powerful console. It’s also why I recommend playing in Japanese with subtitles if you can. Nothing against the English voice cast, but there’s just certain storytelling devices that work a lot better with Japanese dialogue.

Along with the strong focus on the setting comes a sharper focus on gameplay. This comes after Monster Hunter World put more emphasis on a cinematic style of storytelling. Players of World found themselves scoping out uncharted lands, unraveling mysteries, and getting to know the crewmates of their expedition. One in particular, the player character’s handler, got a lot of screen time. Rise, as if in response to the many fans who hated the Handler, narrows the scope of its story. It’s basically “there are lots of monsters coming, go get them.” Some Kamura residents get very simple character arcs, but none get the spotlight that the Handler did. If you’re only here to fight big monsters, Rise is more accommodating to that than World was.

For the most part, this tradeoff worked for me. Kamura and its music still draw me in 40+ hours later, and there are a few amusing residents that keep me engaged. And I’m mostly here to hunt monsters anyway. However, this gorgeous paint job doesn’t completely cover what Rise is missing. I’ve had several minor instances that remind me the Switch just isn’t capable of what the PS4 is. The monsters I’m fighting look great and move fluidly, but in the background, I can see smaller drakes flapping their wings at half the framerate. It reminds me of how World went all-in on creating ecosystems in its maps. As gorgeous as Rise can be, I am still occasionally reminded of the lush picture World painted, one that inspired a movie. 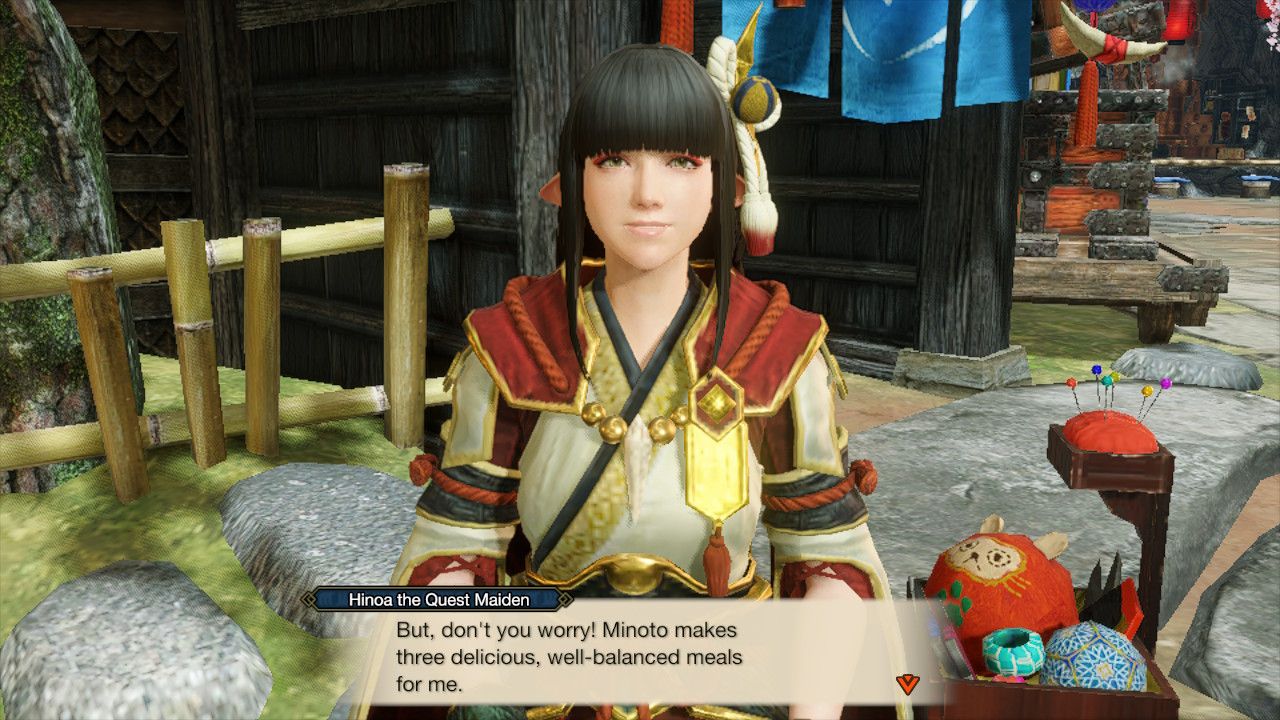 But enough about all that – how is the hunting? It can be too easy, depending on what quest chain you follow. After getting through the tutorials, you can choose to embark on Village Quests or Hub Quests. The Village Quests cover the story of Kamura, and seem designed to be a newcomer’s entrance to Monster Hunter. Veteran players might want to skip Village Quests. They tone down the monsters a lot – I was surprised to encounter a Zinogre fairly early on and even more surprised by how quickly I kicked his tail. Don’t worry, though, high rank Hub Quests will deliver the beating Monster Hunter is known for.

Here to supply that beating is a fantastic array of monsters. World got criticism from fans for mostly featuring the dragon and dinosaur-like beasts. Rise addresses that right off the bat by bringing in some of the more freaky creatures from Monster Hunter history and some creative newcomers. With them comes a renewed emphasis on status effects, particularly elemental blights. This overall variety, and the promise of more monsters via free updates, are a good sign for replayability. It also pushes players to use all the tools at their disposal, providing great satisfaction when you finally do take out that monster that’s been troubling you.

Thankfully, hunters have many tools at their disposal in Rise. This marks another difference from World, where much of my strategy involved using the environment. In its efforts to build lush landscapes, World filled its maps with environmental traps. The idea was to lead a rampaging monster into vines so it would get stuck, or kick a poisonous toad so it expelled gas just as the monster came over. Rise removes natural hazards in favor of small animals you can collect. This gives hunters more agency in using traps. Now you can plant the poison toad wherever you’d like or throw bait into water to make a swarm of piranhas jump out at your command. Again, I do miss the way World built an ecosystem with its maps, but I get how putting players in control opens up more strategic options.

The most satisfying new item is the wirebug. These are permanent and allow you to zip around on light webs like Spider-Man. In certain instances, wirebugs can also be used to wrangle a monster so you can ride it. Both of these things felt like gimmicks to me at first, but now they’re essential to my hunting strategy. Wirebug zips are a crucial escape button when you’re low on health. They can also help you reach flying enemies and attack from angles that weren’t possible before. Riding monsters can feel stiff, as they struggle against your control and thus don’t turn well, but is ultimately fun. There’s something to be said for being the one to unleash Rathalos’ fire instead of running from it. 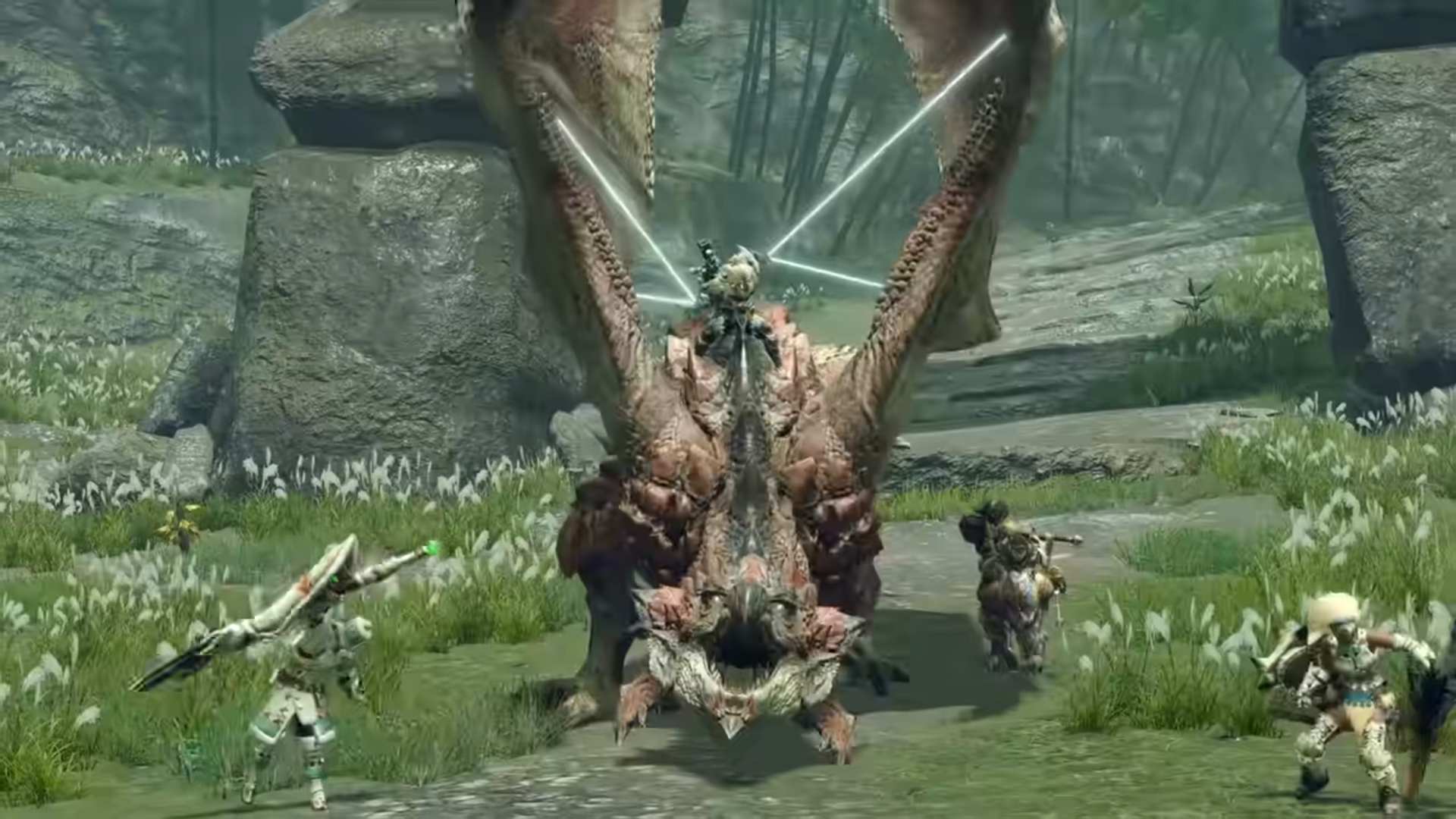 Returning players will also find their hunts made easier in a good way thanks to several quality-of-life updates. The biggest impact is made by the Palamute, a faithful canine companion. Hunters still have their Palico cats to fight alongside and heal them, but Palamutes fight with you and let you ride them. Their speed brings a welcome efficiency to the hunt – monsters often run back to their lairs when they sustain too many injuries. These pauses give players time to sharpen their weapons and drink any potions they may need, but they were tedious in earlier games. Now you can use items as you give chase on your dog, and that one little change does wonders to keep the flow of the fight going.

On the smaller side of things, gathering spots like ore crystals only need to be interacted with once to get the full bounty. You can even mine and gather from atop your Palamute, making resource gathering a quick pit stop instead of a grind. Side quests are easier to keep track of than ever. The town map lets you warp around Kamura and tells you where active quest-givers are stationed. Rise is the best Monster Hunter game when it comes to streamlining side activities so you can get to the hunting faster. 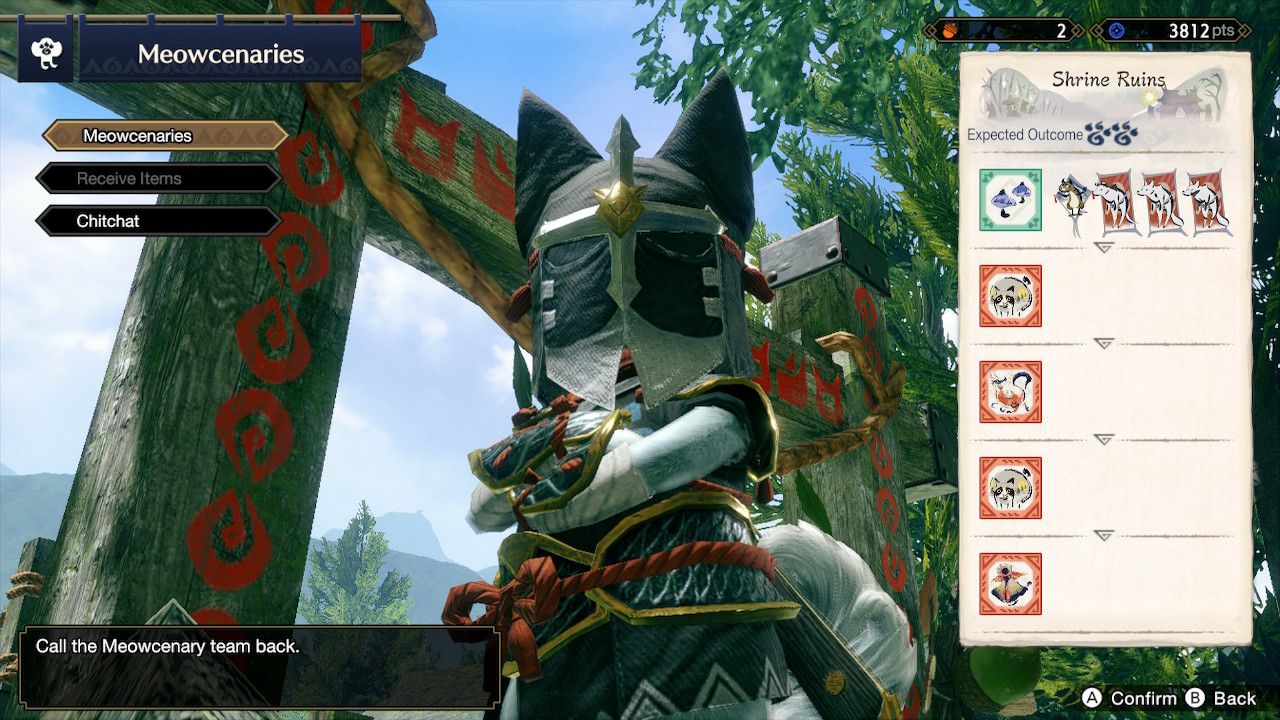 It also might be the best Monster Hunter game when it comes to its alternate form of hunt. One of my favorite activities in World was the Zorah Magdaros event, an epic set piece where the target was a monster the size of a building. There was no killing the Zorah, you could only blast it with siege weapons and climb inside it, all in hopes of dealing enough damage to turn it away. Rise has Rampage Quests instead, a sort of tower defense mission where waves of normal-sized monsters try to bust down the gate to Kamura. Players must strategically place bombs, ballista, and other devices to drive back the hordes.

Rampage is yet another example of where Rise trades in scale for strategy. The Zorah hunt was an exciting struggle that conveyed the sense of taking on a godlike being. There’s nothing of that size in Rampage Quests, but they still carry the feeling of facing overwhelming odds. The difference is that the monsters rotate and that you can actually beat them all. This gives Rampages replayability beyond just farming material. Even after the novelty wears off, you want to keep going for better grades and to best the Apex monsters, Rampage-exclusive variants that power up the usual beasties. Rampage Quests with a group is a particular highlight of the Monster Hunter Rise experience. 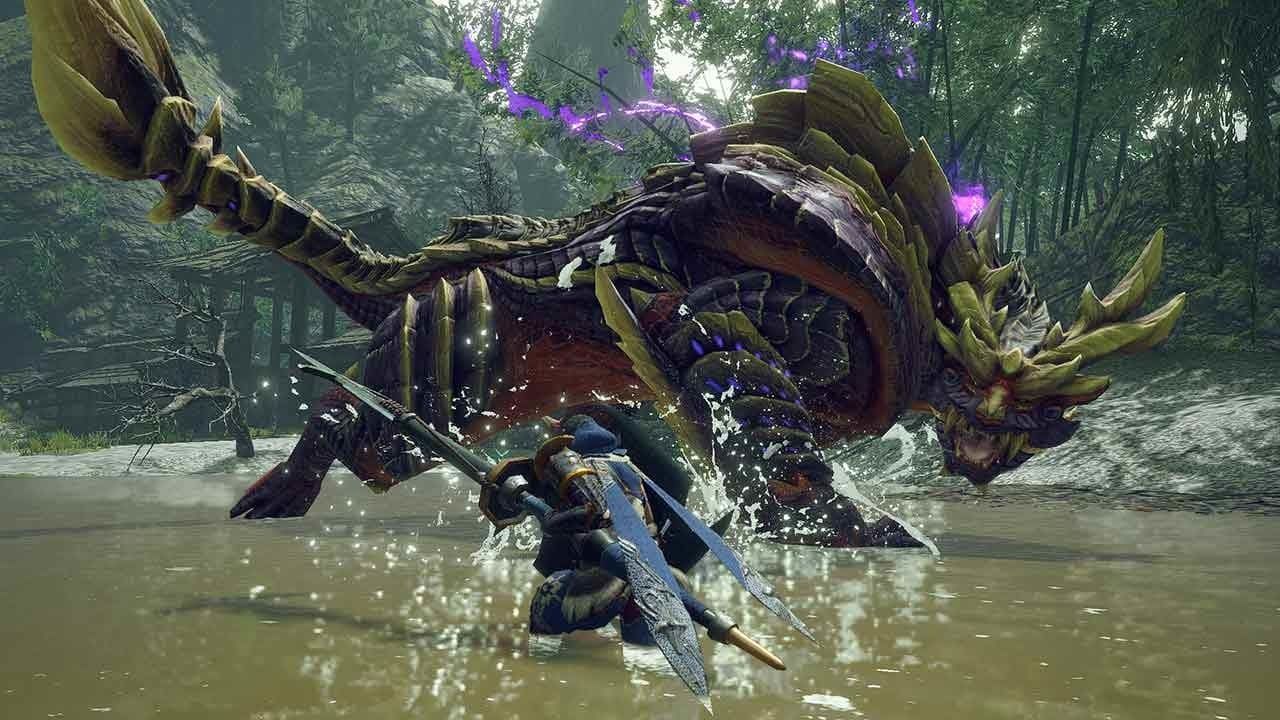 If you’re a Switch owner who already finished Bravely Default 2 and can’t stand how Persona 5’s sequel is an action game, you might be curious about Monster Hunter Rise. It’s a great entry point thanks to the Village Quests and helpful dog companion. If you’re a fan who already pre-ordered and want to know if it’s good, rest assured. You might actually like Rise better than World, as it brings back some of the strategic variety while building on more recent quality-of-life updates. It’s a shame that the Switch holds the game back in small ways, but this is a contender for best in the series. If post-launch support is as good as it was for World, this game could easily rise above the rest.

A review copy of Monster Hunter Rise was provided by Capcom. It will release worldwide for Nintendo Switch on March 26.

Next: Capcom Believes Monster Hunter: World Success Will “Transfer” To Rise On Switch 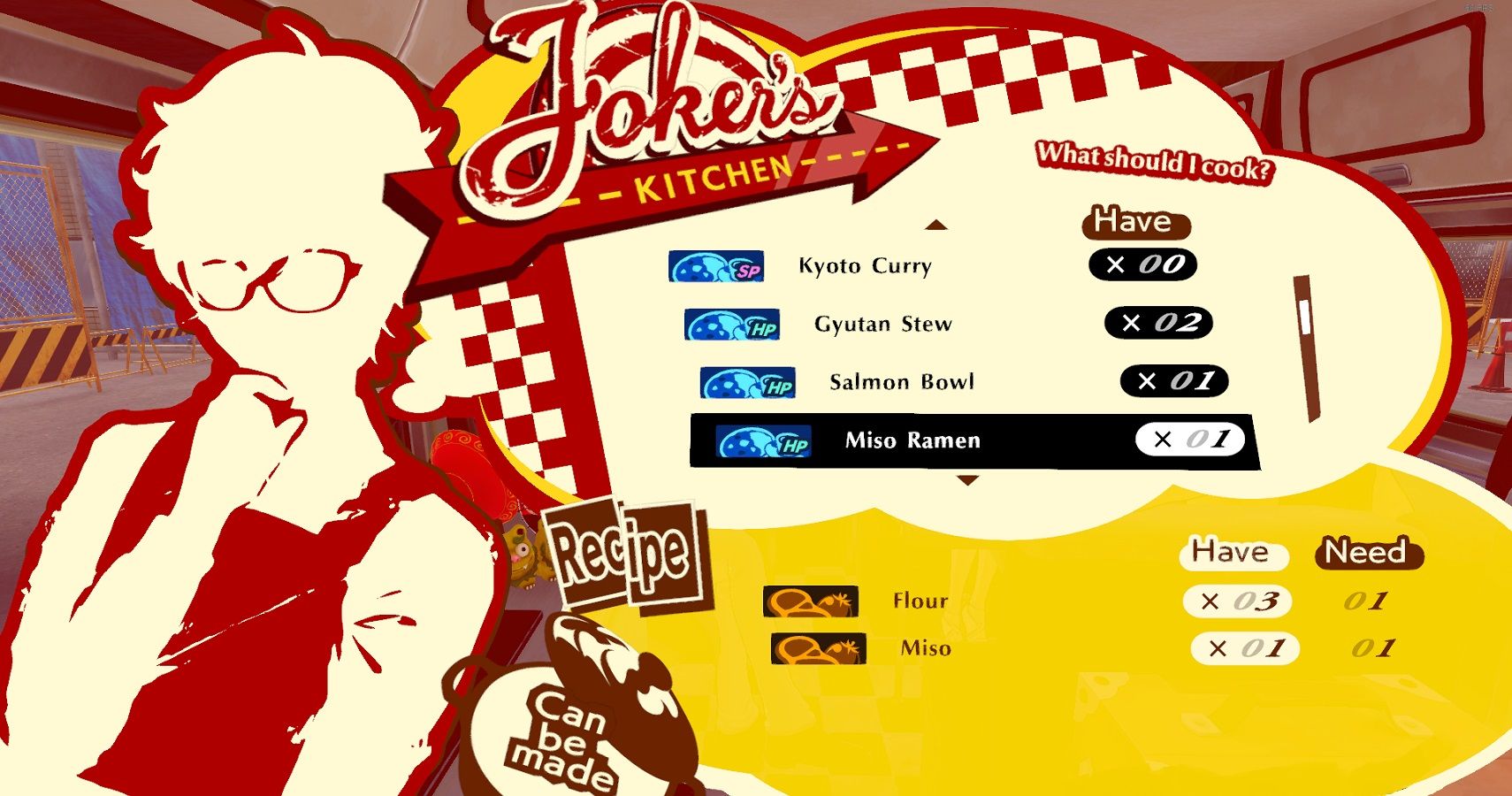