For many gamers, the best thing a game can be is nostalgic. It doesn’t have to invent a new genre or represent the next stage in graphics as long as it successfully transports us back to a world we thought long gone. Moonshades, a free-to-play mobile dungeon crawler, leans heavily into this idea. The sole developer calls it a “culmination of a long-felt desire” to go back to the Dungeons & Dragons days of their childhood. Moonshades succeeds in feeling like a deep dive into dungeons past, and is only a little hampered by smartphone controls and microtransactions. 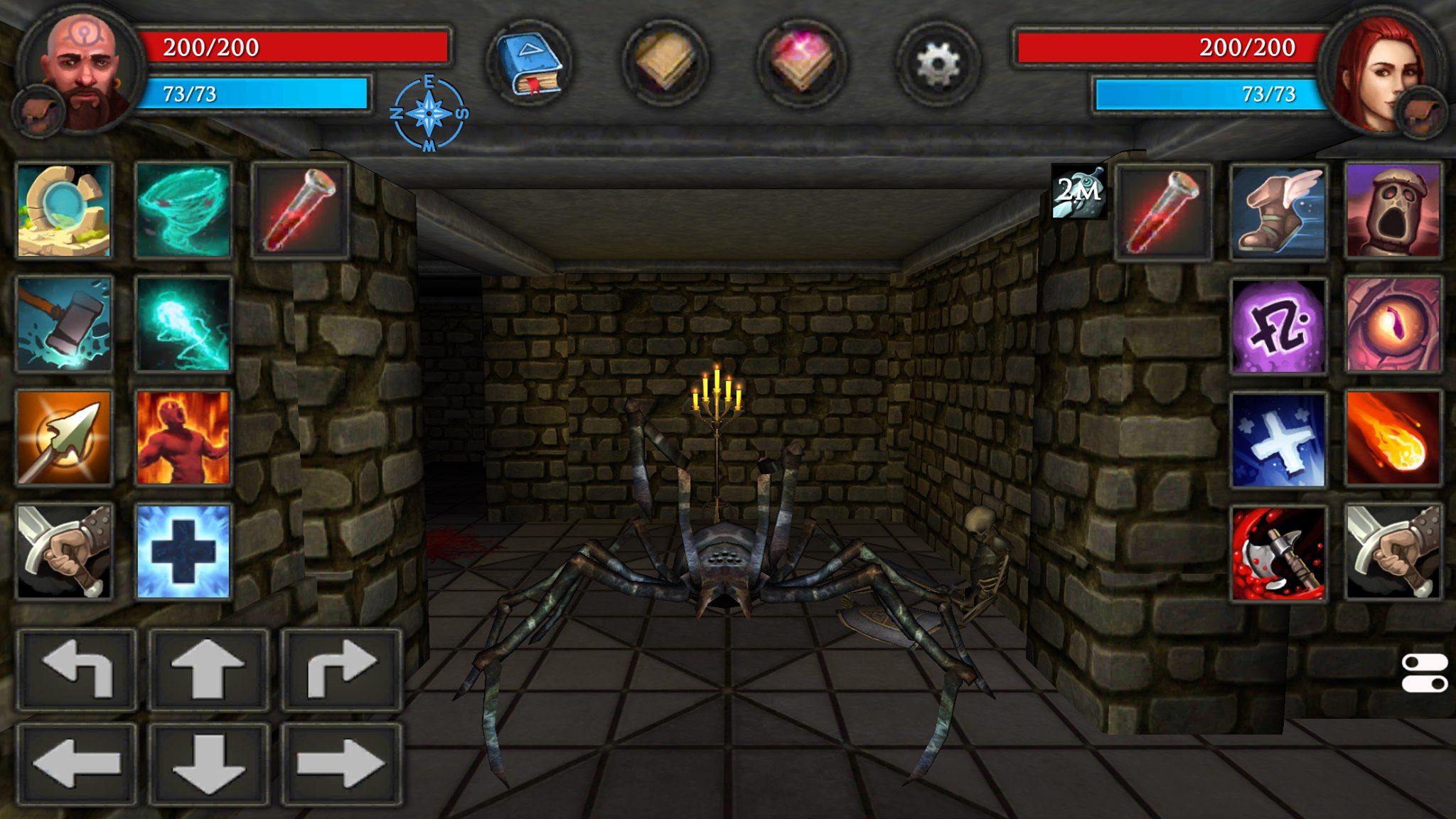 Moonshades opens with a brief, standard fantasy story. Monsters have suddenly appeared en masse, driving the humans of the kingdom into hiding. They flee into the mountains, where a network of ancient hallways await them. Just as things seem their most dire, two badasses enter the scene. They are the Moonshades. What does that mean? How will they save humanity from the doom? It doesn’t matter. All you need to do is dungeon delve and kick ass.

In all seriousness, though, Moonshades does a great job creating a sense of mystery around the dungeon. The lack of exposition drives exploration. After choosing a character portrait and seeing the opening text, you’re plopped into the dungeon. Your two characters share a first-person view where you can swipe to look up, down, and around. Arrows on the bottom left control movement, and you tap the screen to interact with objects/people. Tap on everything you see, and you’ll collect notes and maps that give valuable background info.

Or, you can just plow through and kill monsters. Moonshades is an RPG, and that means levels and loot. Fights consist of tapping a sword icon on your screen to attack close enemies. As you level, you’ll get the chance to learn magic so you can pepper them with energy and elements from a distance. You can move around to stay out melee range while your cooldowns tick away, but enemies will never retreat. Combat is mostly a battle of attrition. It manages to be fairly entertaining, though, as enemy strength keeps pace with your advancement. There are also frequent loot drops.

Phones Might Not Be The Best Place For Dungeons 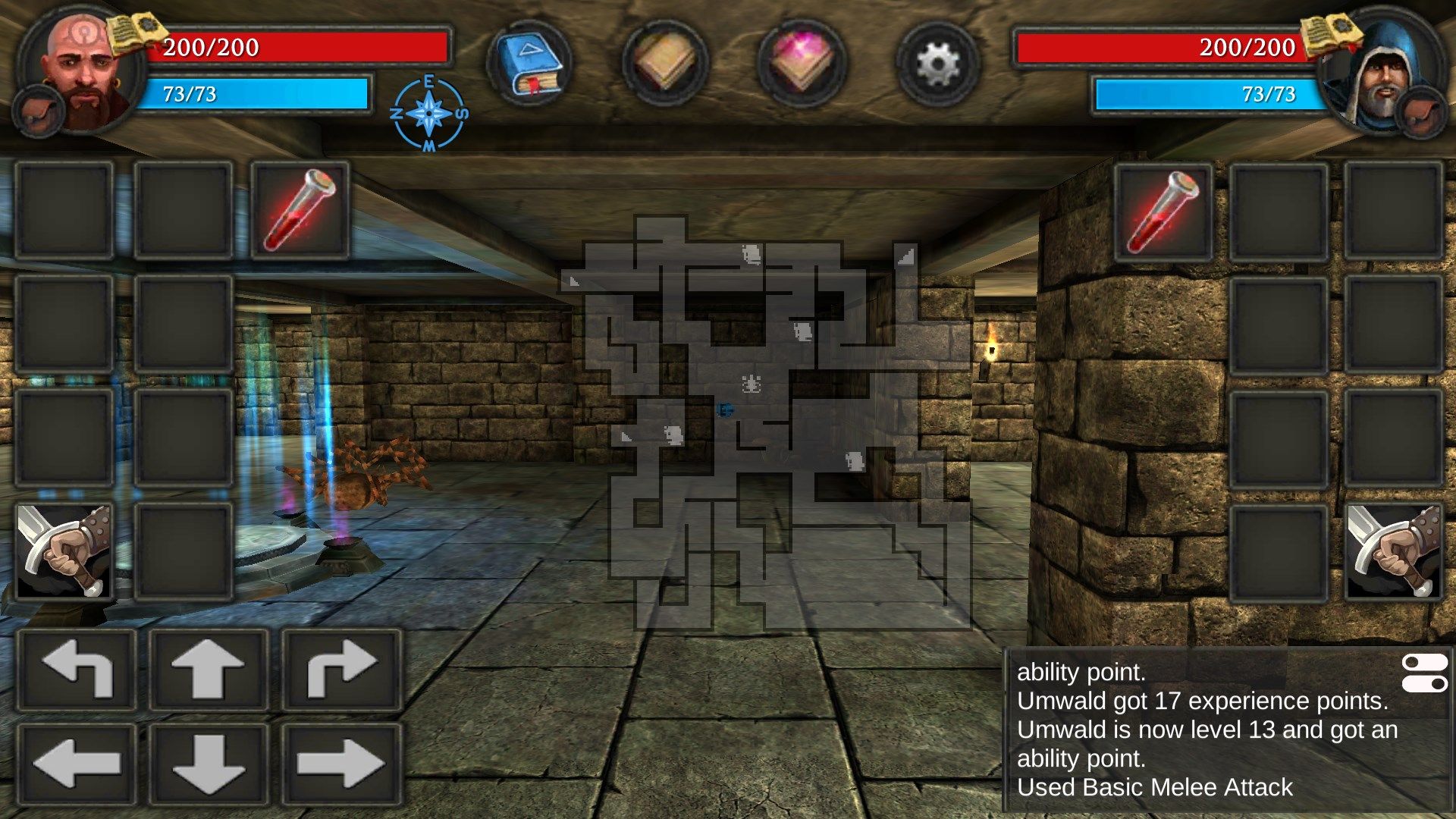 The gameplay of Moonshades manages to be addicting in a good way. It does feel like a well-managed D&D campaign in that the enemies and dungeon grow with you, new spells come at a brisk pace, and loot drops are generous without being overpowered. The problem is that pen-and-paper exploration doesn’t translate well to smartphone gameplay.

The arrows on the bottom corner of the screen are too close together. Too many times did I turn around when I meant to move forward. I did eventually get used to it, but I spent some time turning around while enemies whaled on me. For reference, I played on an iPhone 11. So while a tablet would be better, it is one of the more common screen sizes. Something you’d think the developer would optimize the game for.

Also of note is the frequency of loot drops. You get a lot of loot in a short amount of time in this game. While that sounds great in theory, in practice it means you fill up your tiny backpack quickly. You do get a box back on the first level of the dungeon that you’re meant to revisit regularly. But still, it was common for me to find myself filling up within minutes of entering a dungeon level. That made the rest of the experience filled with a lot of discarding. The solution is microtransactions. You can buy more bag space with gems, the paid currency. It’s by no means predatory, but it is annoying.

Moonshades really is an impressive game. The sprawling, mysterious dungeon beckons me to dive further in to see what adventures (and loot) I can find. And it’s the product of a single developer who works on it between shifts at their day job. I’d love better controls and more free inventory space, but I’ll still happily recommend this to anyone who needs more D&D than they currently get. And let’s be honest, that’s all of us.

Gems were provided to TheGamer to alleviate our inventory issues. Moonshades is available for download on iOS and Android devices.