Planet Coaster was originally released almost four years ago to the day, on November 17, 2016, for Microsoft Windows. The theme park construction and management game is viewed by many as a natural successor to the Rollercoaster Tycoon franchise. It takes a look at the concept of building and running a theme park and turns it up to eleven with micromanagement and customization on an epic scale.

As anyone who has played Planet Coaster knows, the game is incredibly detailed, and with this comes a steep learning curve. Almost everything in Planet Coaster can be completely customized, from the paths to the rides, as well as every aspect of how the park runs. Even the scenery can be built up piece by piece, and in some cases wall by wall. 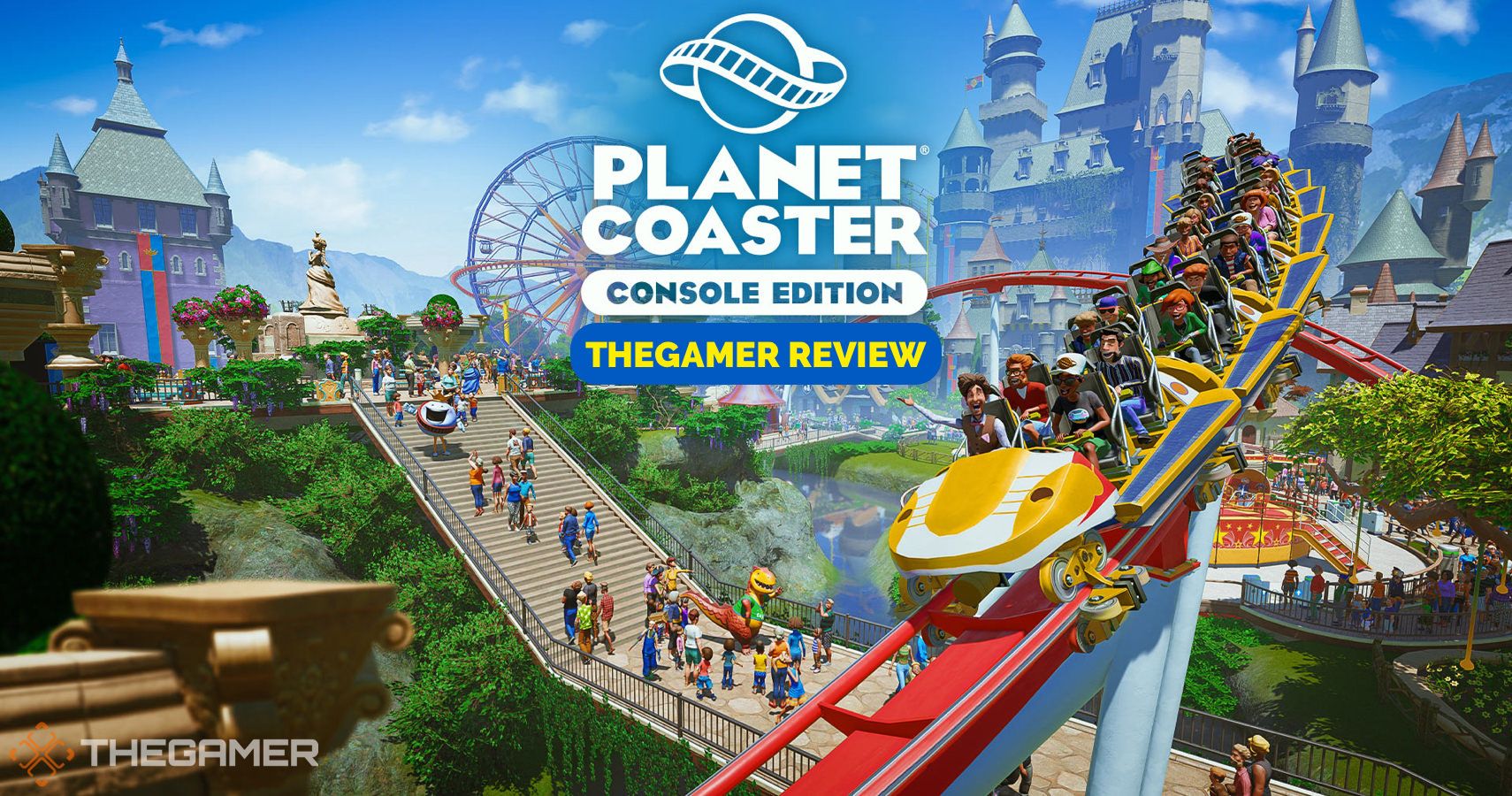 This level of detail brings considerable depth to gameplay, but with it comes several challenges, especially for the controller users. Due to this, Planet Coaster Console Edition isn’t just a straight port, but also includes a complete overhaul of the control system and game UI that simplifies and streamlines the experience for console players. 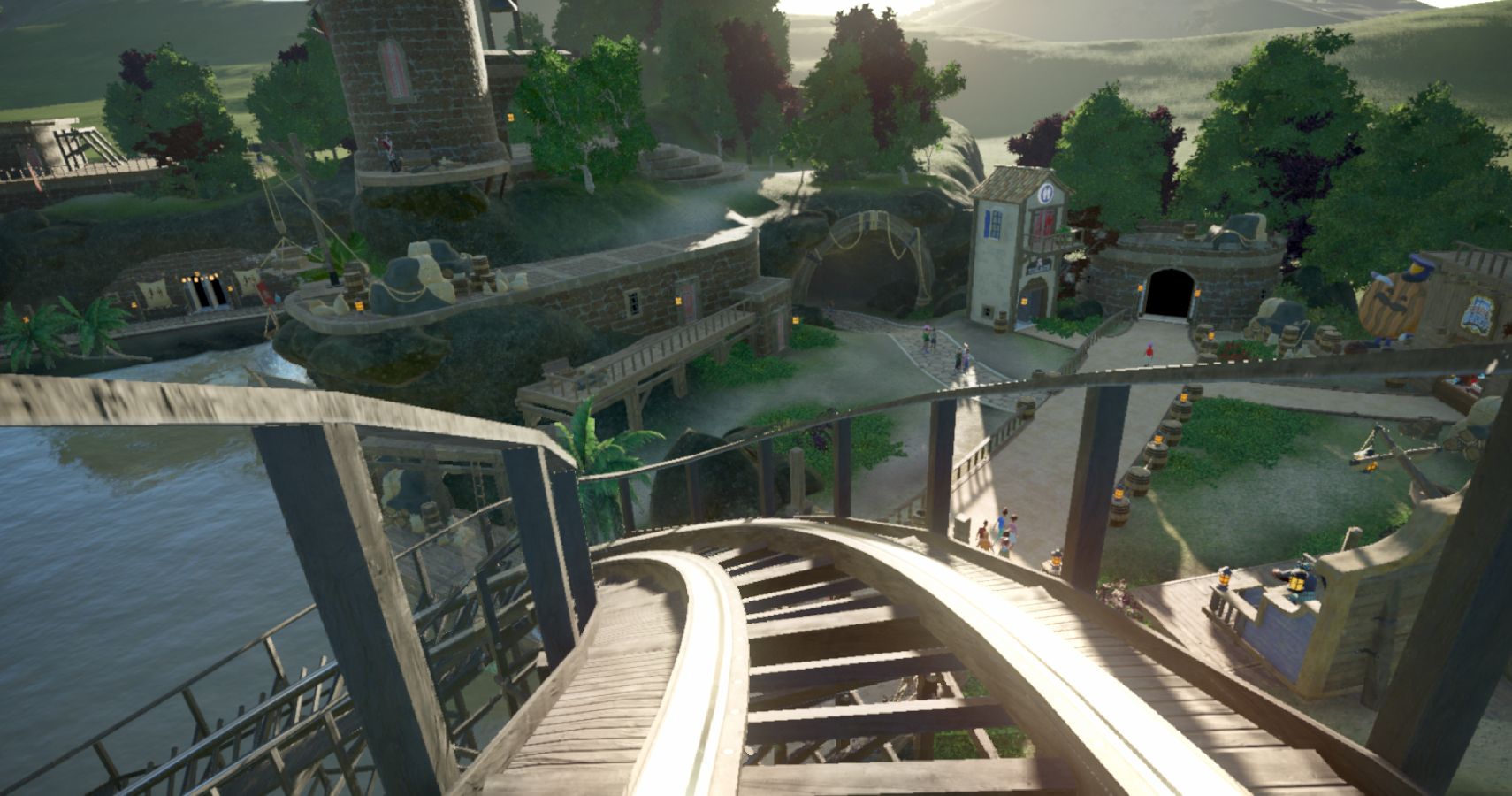 Planet Coaster is all about control. It pushes the management genre to the next level with in-depth options rarely seen in games of this type. Simple menus, such as those in Rollercoaster Tycoon 3 or Jurassic World: Evolution, don’t exist here, as every item you build and each decision you make comes with options. So many options.

For example, you don’t just place a shop, rotate it a little, and connect it up to a path. In Planet Coaster you can place the shop shell then use custom roofs, walls, windows, and doors to surround it with a completely unique facade. Then you add your path, which you can choose the length, width, and precise angle of. While you can instead use pre-built blueprints for the buildings and scenery, even then you’ll find three different options for movement and rotation, allowing a level of precision placement you wouldn’t expect. 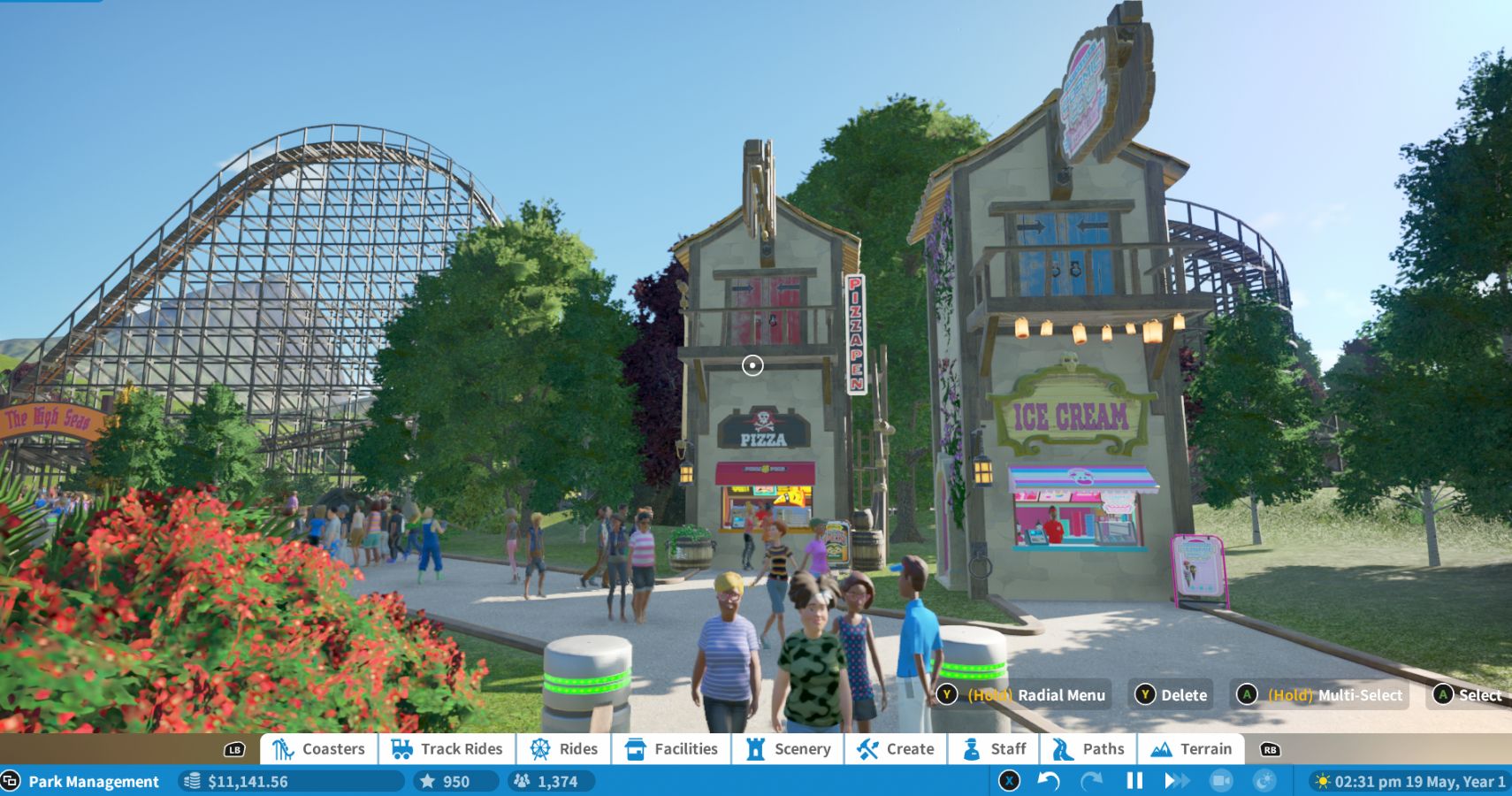 The game takes you deeper into park management than any other game of this type but thanks to the new tutorial level it actually feels far more intuitive than you’d expect.

I was given the opportunity to play a preview of the tutorial level back in September, and I’ll admit I completely panicked. The unfamiliarity of everything from the menus to the use of a controller threw me off. While I left with the hope that the game would prove accessible to newcomers, the fact I’ve been playing on PC for so long left me feeling at a disadvantage.

However, when out of the scenario of knowing the devs are probably watching me play, I was able to properly assess the new changes and really take in just how much work has gone into this game.

As expected, there’s a career mode, sandbox mode, and challenge mode and the way everything works is the same as both the PC version of Planet Coaster and Frontier’s Planet Zoo, which was built using the same in-house game engine. The differences are in the way the menus work and in particular the cascading menu system. 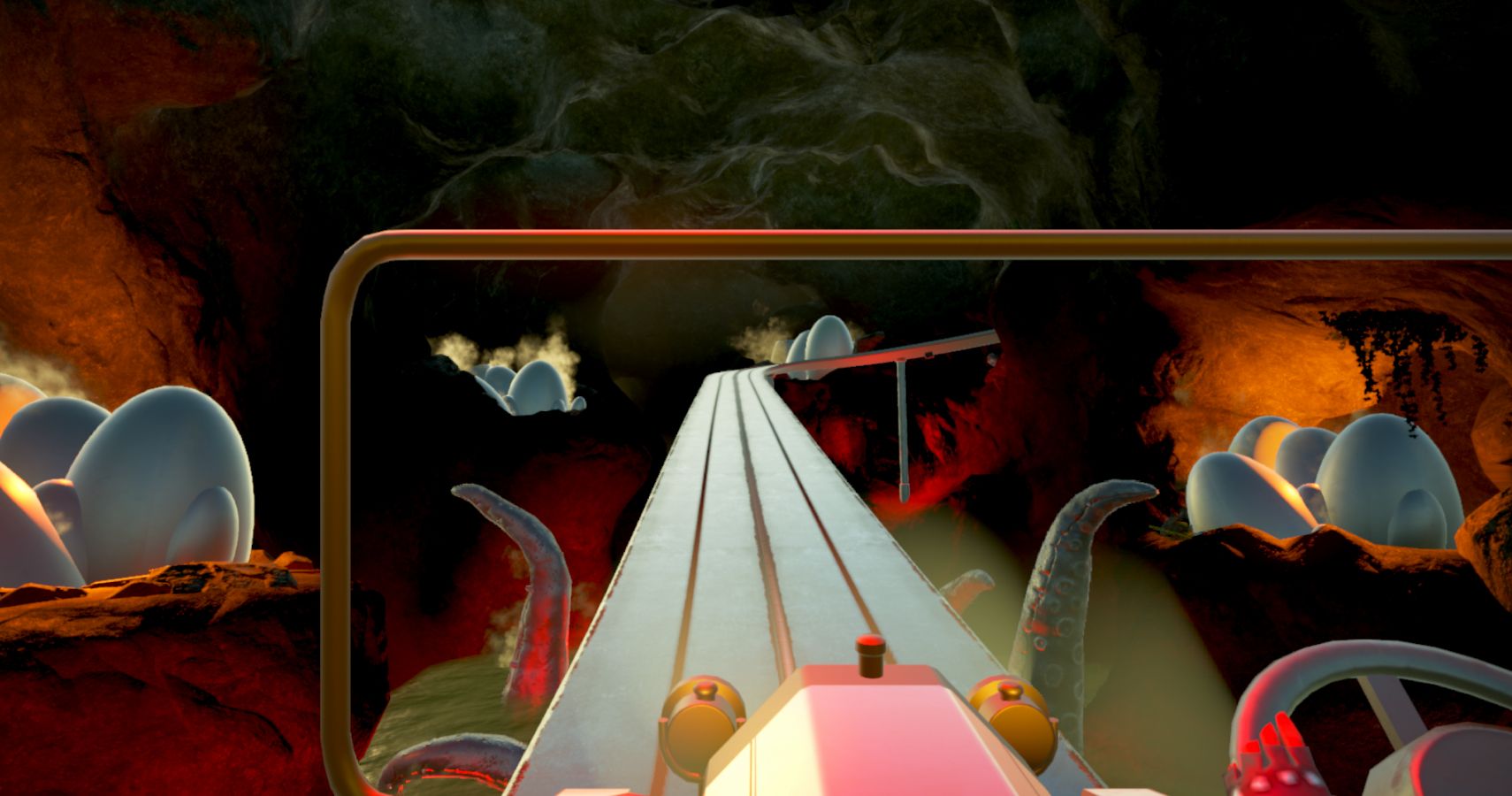 By using radial menus and on-screen prompts the new menu system actually flows a little more intuitively than the original. The learning curve is still there, especially when it comes to building, but if anything it has decreased slightly in this console edition. You can even use a keyboard and mouse if you find this easier.

The tutorial level is the best addition to the game. It introduces new ideas gradually and also gives you access to a huge amount of new blueprints for buildings and scenery, meaning newcomers don’t have to navigate the complex custom building system.

You can even complete the entire career mode without ever touching some of the more complex features, should you choose to do so. Not diving deep into micromanagement may mean things take longer but the basic game is very much playable without needing to take advantage of every aspect of customization.

This means that players have more choice and can familiarize themselves with the basics before they jump into everything the game has to offer. The way the menus work also means that the basics will be accessible within a couple of button presses with more complex options hidden on the layer below, allowing for a less complex navigation system for those just wanting to keep their management at a more surface level. 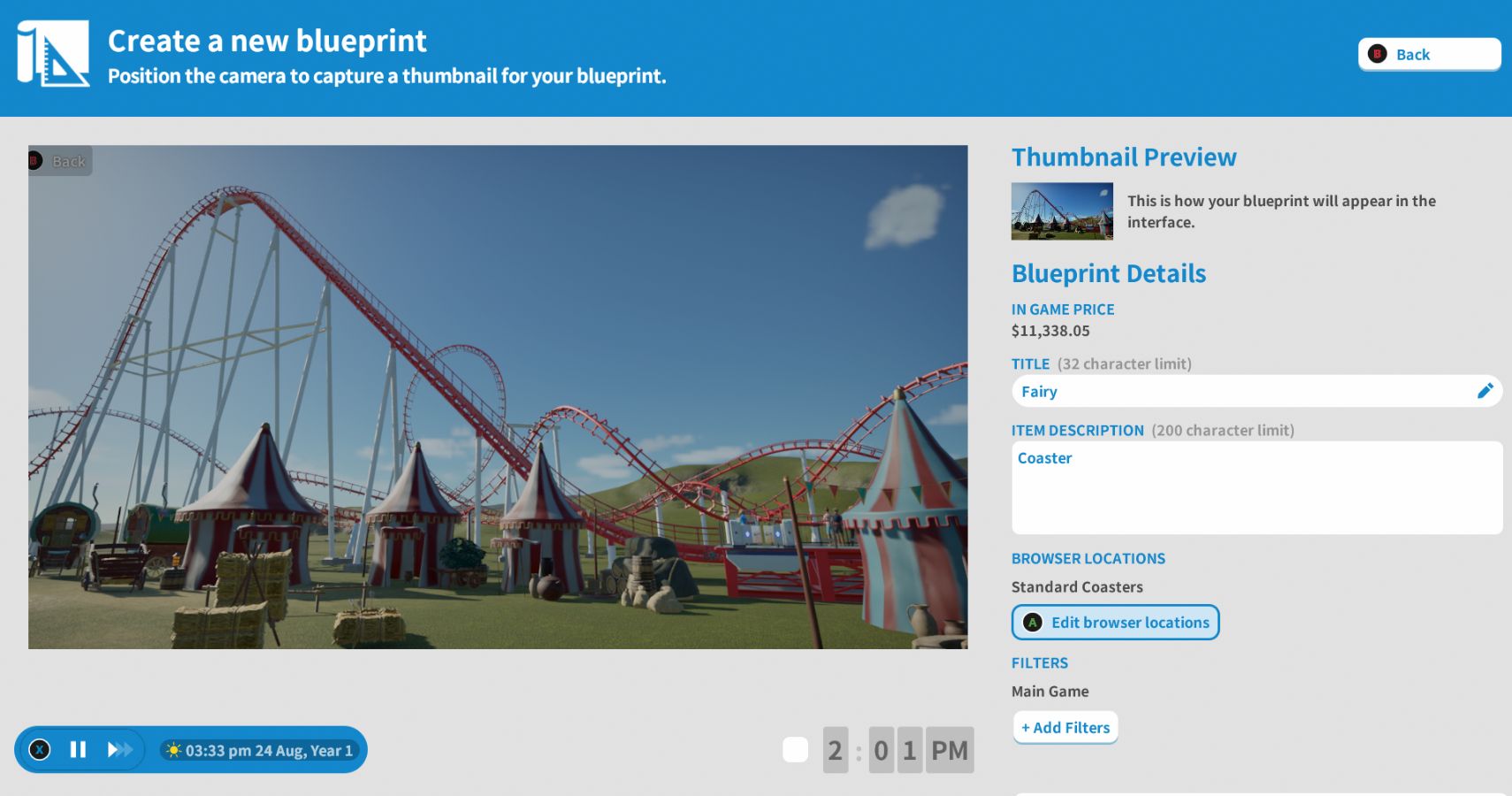 For newcomers especially, the learning curve is still there. It takes time to figure out the navigation and time to learn how the unique placement system works. However, the game offers an experience that you just won’t find elsewhere, and taking time to figure out its quirks will really pay off.

The team at Frontier also wanted to ensure that console players didn’t miss a thing compared to PC players and as such has created the Frontier Workshop. This feature is a custom online platform that allows you to save and share designs for rides, buildings, and scenery with other players. It functions similarly to the Steam Workshop feature on the PC game, allowing you to either benefit from other’s creativity or showcase your own.

Saving and uploading is easy and the system is simple to navigate. For a game so complex great care really has gone into making every aspect of it as easy as possible. Planet Coaster Console Edition will bring you as close to running a real theme park as you’ll ever get without leaving the comfort of your sofa.