The latest DLC for Planet Coaster Console is yet another dual release, with the Ghostbusters and Studios packs coming out simultaneously. This is the first collaborative DLC we’ve seen, although we already know that Frontier handles franchises well, with Jurassic World: Evolution being a particularly strong example. The Ghostbusters pack is no different, with great care being taken to bring recognizable and accurate elements of the original movie into Planet Coaster. This is complemented by the Studios pack, which allows you to bring a touch of movie magic to your parks.

The main focus of the Ghostbusters pack is a lengthy campaign mode that sees you take charge of a half-built theme park, which even has some ghosts of its own. Just playing through the story took my playtime into double figures due to its five chapters, each with several of its own stages to complete. Even those who are very familiar with park mechanics can expect to get a decent amount of playtime from it, while people who like to take their time or build custom rides will find enough space to spend literal days in this park. It’s far more in-depth than the career mode challenges and also features a massive amount of Easter eggs for long-time Ghostbusters fans. 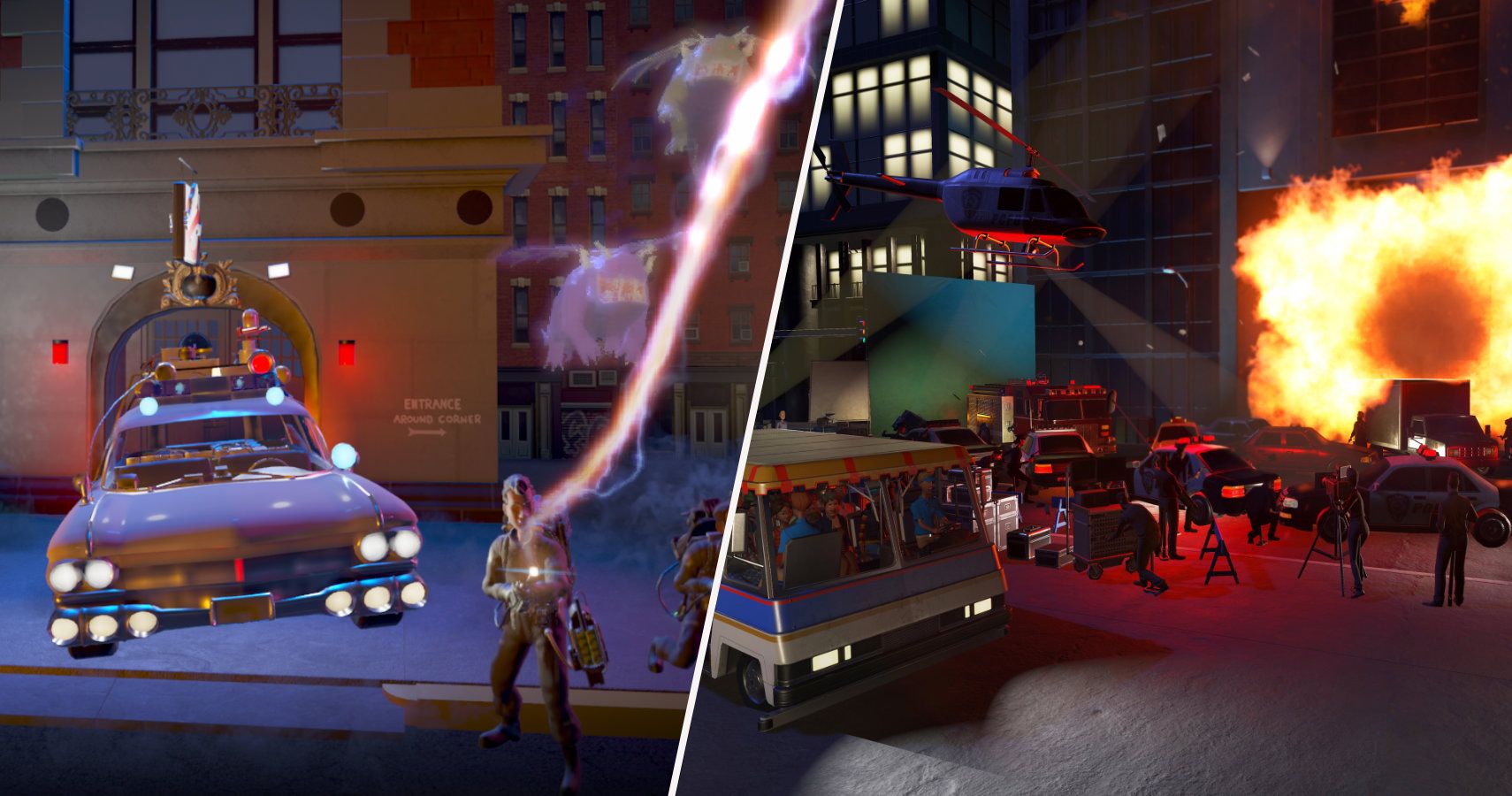 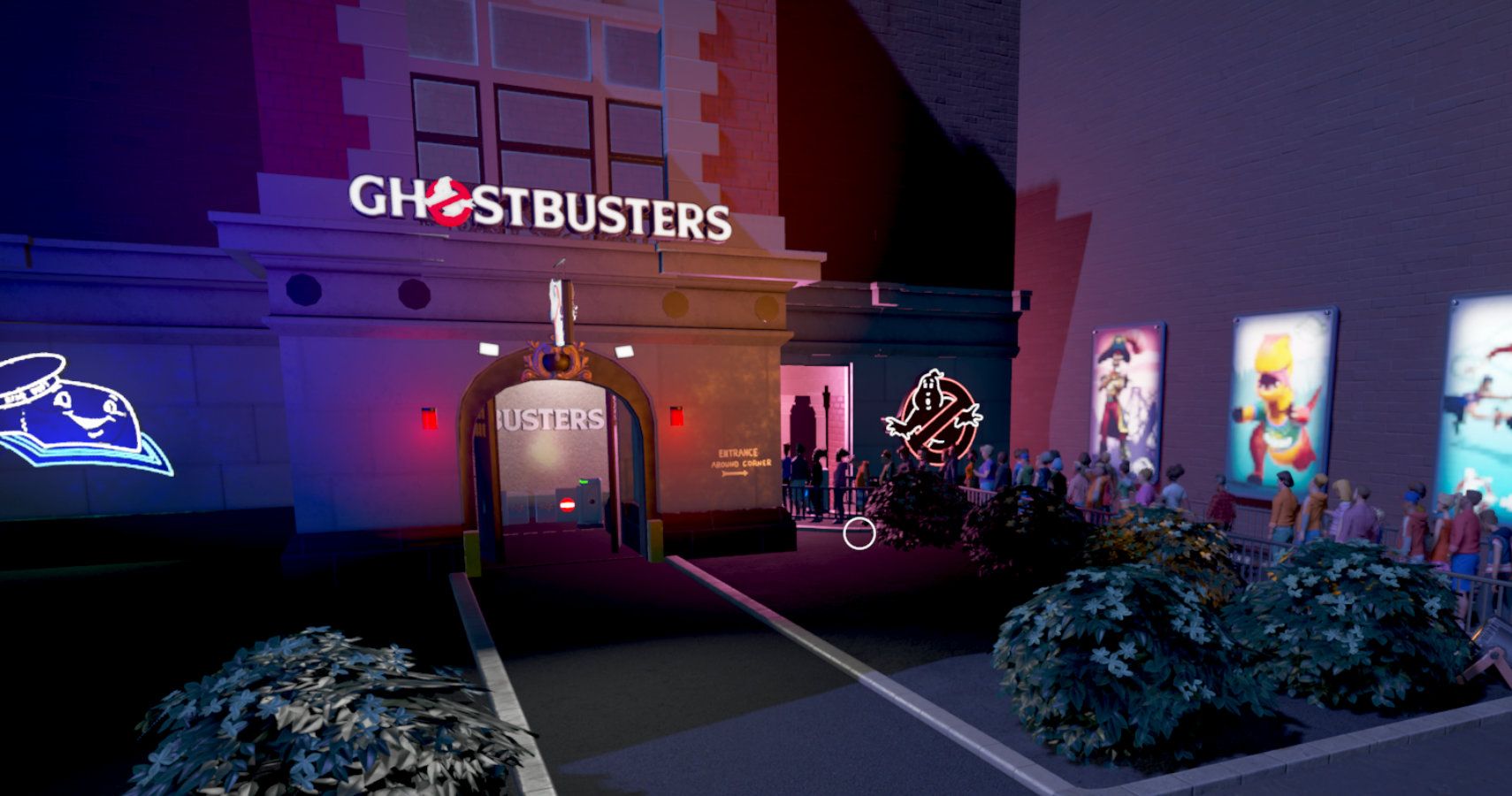 The narrative focuses on the Ghostbusters trying to make money by lending their name and brand to the aforementioned theme park. When actual ghosts show up, Walter Peck intervenes, making life difficult. Peck is voiced by William Atherton, who also played him in the movies – he also acts as the narrator alongside Dan Aykroyd, who reprises his role as Ray Stanz. The other Ghostbusters appear both in the park and as part of the story but are unvoiced.

You’ll be given a semi-built park to start with that includes an interactive indoor Ghostbusters-themed ride that you can play yourself. Take a seat in the carriage and prepare to shoot some ghosts as you journey through the different spook-ridden areas inspired by the original movie. It’s an enjoyable little minigame, although it could have been made better by allowing you to shoot Stay Puft as well. Maybe the janitors objected to the mess it would make. 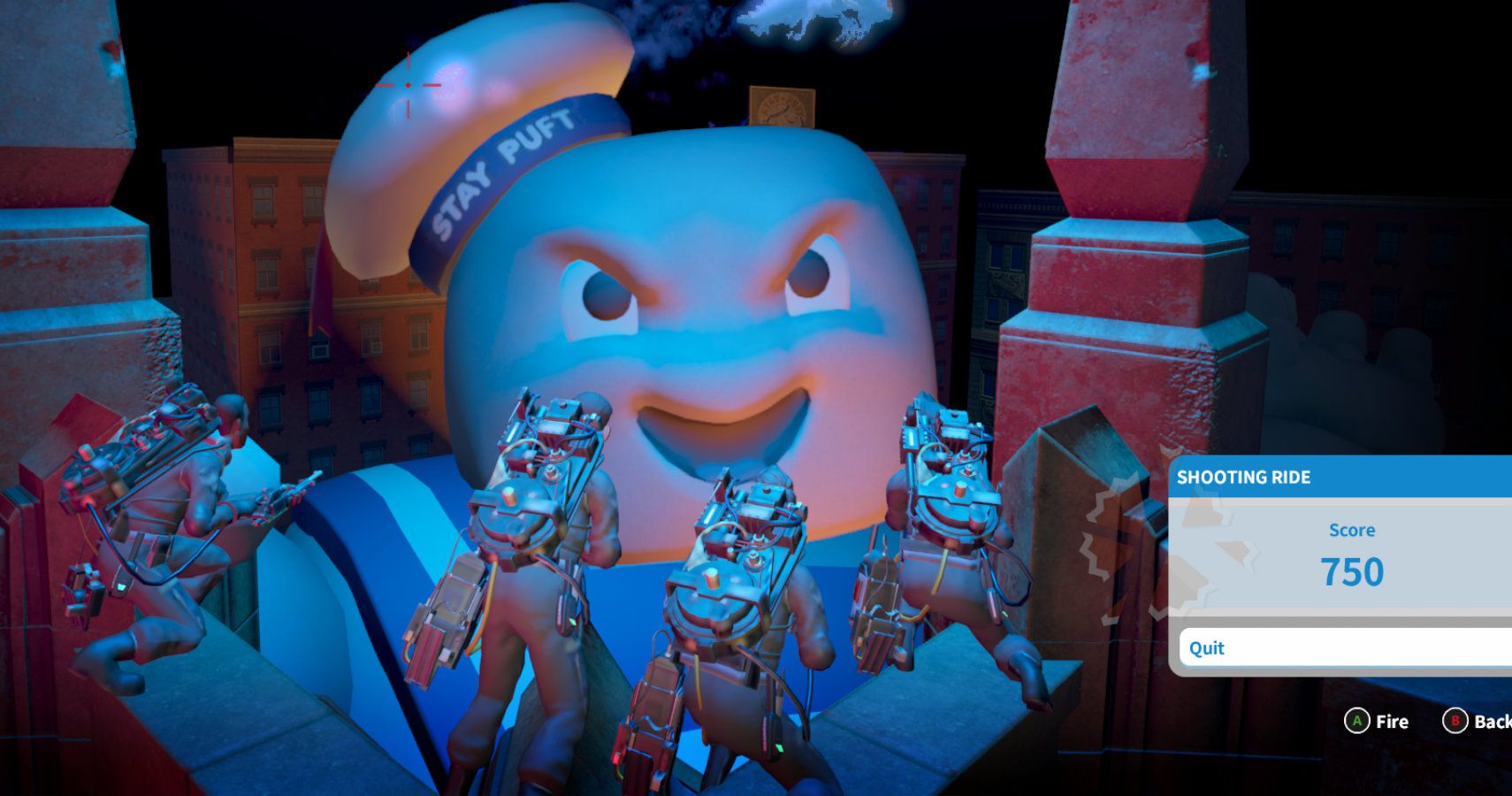 Progressing through the story mode will also unlock themed scenery and rides including a Slimer-themed kids coaster called the RollerGhoster, Ghostbusters-themed shops, and a huge Stay Puft statue. You’ll also be able to hire a Stay Puft entertainer. However, the most unique aspect of the DLC comes in the form of haunted rides. Ghosts will begin to infiltrate your park and you’ll need to hire the Ghostbusters themselves to stop guests from becoming too scared to ride actually haunted attractions. You’ll even need Ecto Containment Units to keep them in. It’s a nice aside that merges the two worlds, even if it can be annoying at times when visitors start refusing to go on rides and Ghostbusters take their time to arrive.

Once story mode is complete you’ll have access to some well-designed themed items, two semi-built parks, and a couple of neat rides. You can even travel around your theme park in ECTO-1 as it blasts out the Ghostbusters theme, which is just as much fun as it sounds. 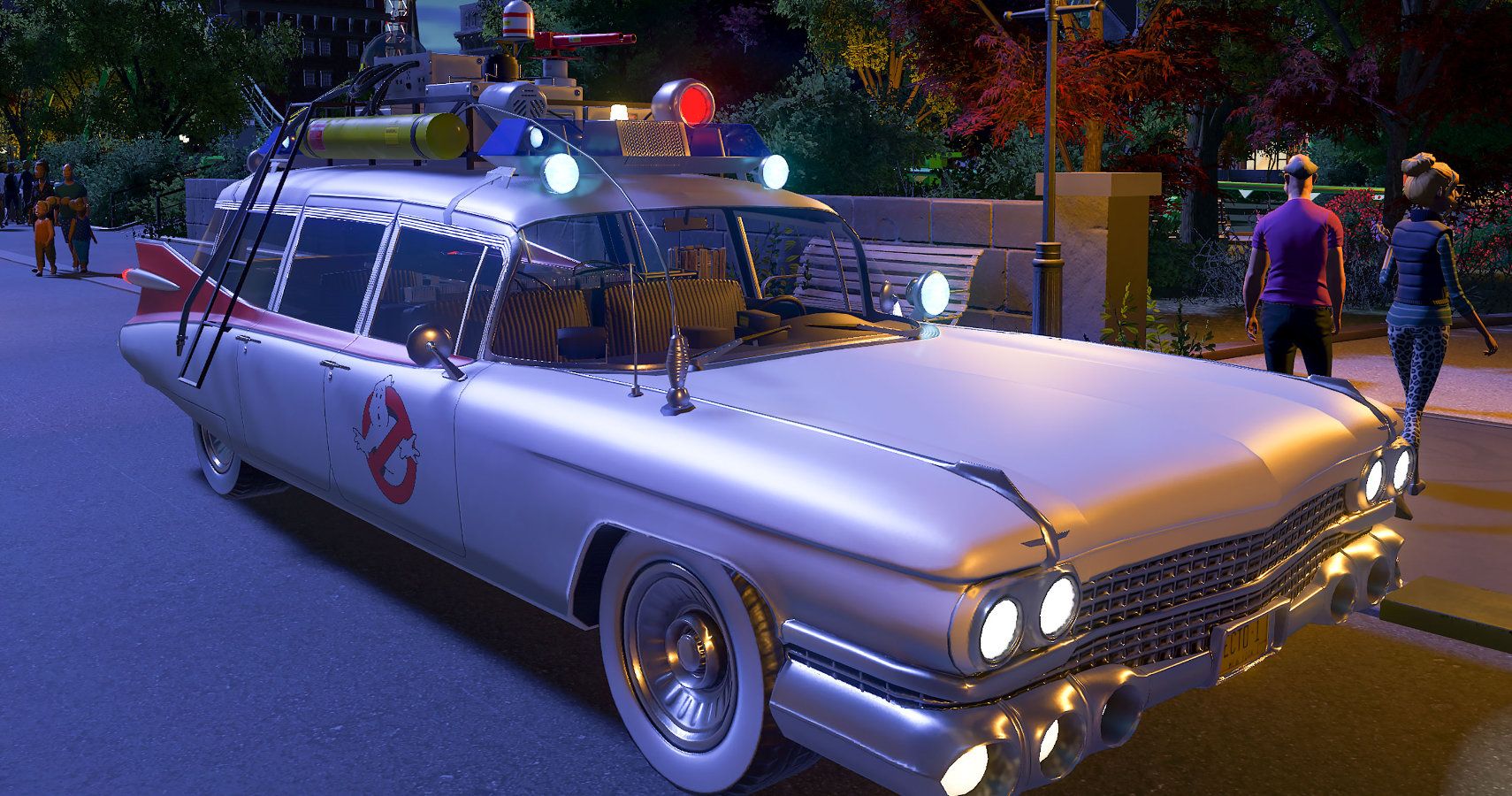 Ghostbusters fans will get far more out of this pack due to the attention to detail involved in the scenery, story, and soundtrack elements you’ll receive, but anyone who enjoys story-driven park management experiences will enjoy the depth of this unique campaign.

The Ghostbusters pack is also complemented by Studios, which does exactly what you’d expect; it adds rides and scenery to enable you to expand your theme park into a place reminiscent of MGM or Universal Studios parks. There are three rides – Big Screen Tour, Re-Motion, and Horror Heights. These are accompanied by a huge range of scenery, animated set pieces, music, and other effects. 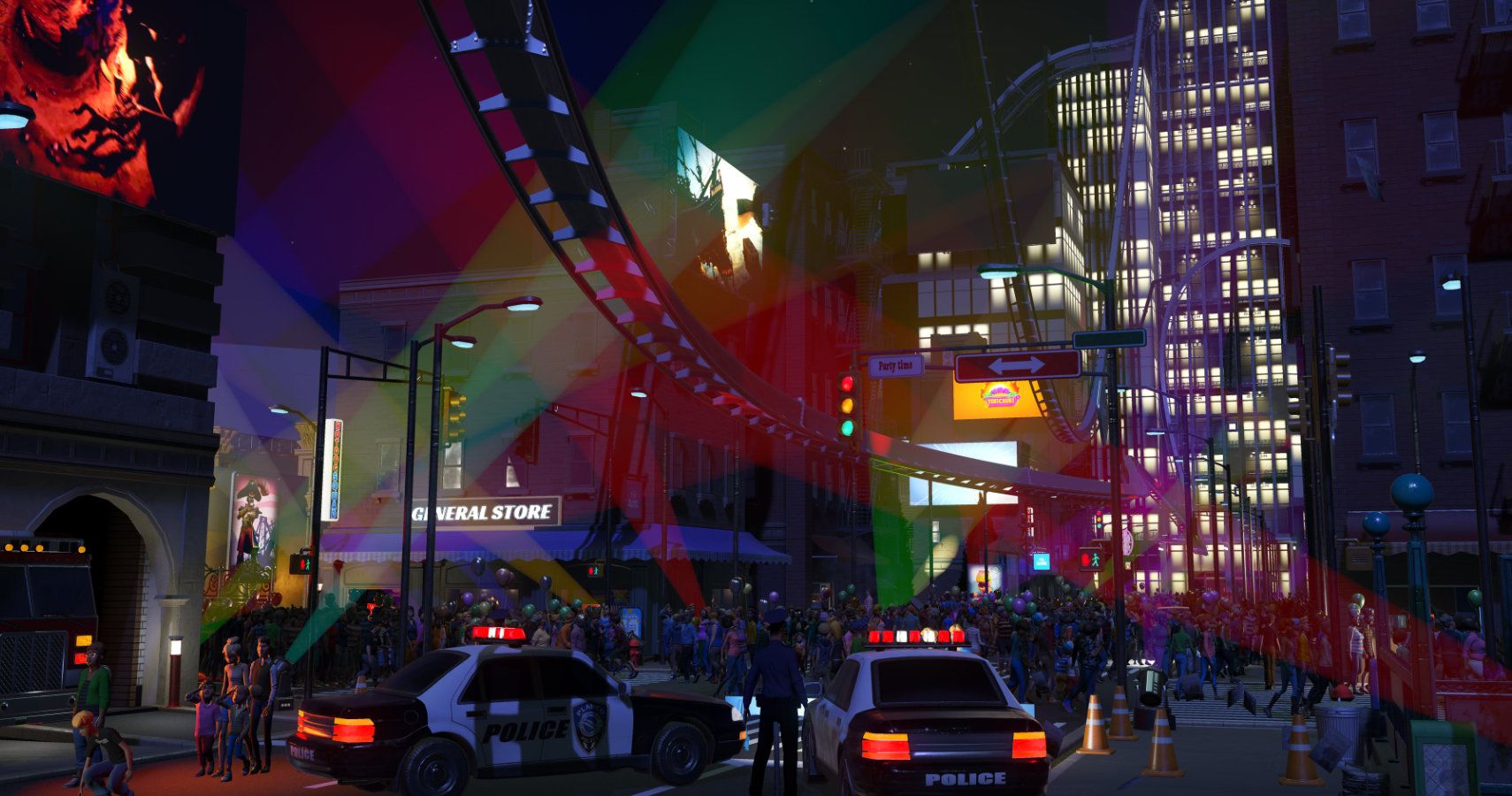 The Studio pack is likely to have huge appeal to those who love building. The Horror Heights ride in particular is a multi-drop tower that has been designed to have a building created around it. The framework is versatile and there is enough new scenery to create an entirely unique experience. For those who prefer a simpler life, the Re-Motion ride shows what’s possible by housing Horror Heights in a large building filled with zombie-themed scenes that tell a story. There are also likely to be numerous creative uses of this ride on the Frontier Workshop for you to download and use.

The Big Screen Tour is similarly multi-functional as the electric-powered tour buses can be used as transport or incorporated into a ride. Once again, there’s a pre-built option and a huge amount of scope to create your own custom tours using the animated backlot scenes. These are just some of an extensive range of scenery pieces for you to use. They are very focused on action-based animated scenes as well as all the things you’d expect in a backlot set including buildings, cars, traffic lights, camera equipment, and road signs. 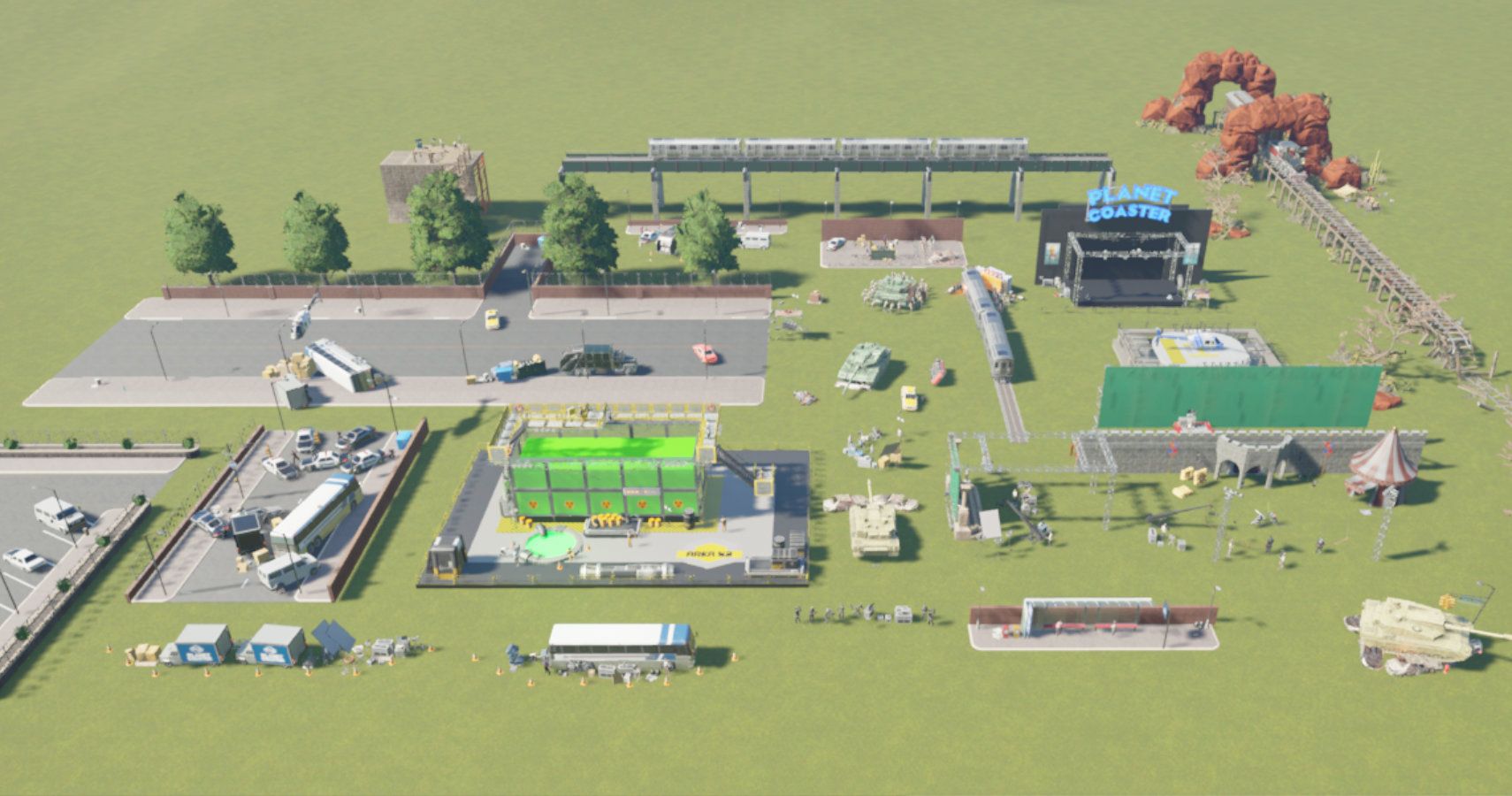 The action scenes are what really make this pack, and they include large-scale scenes relating to disasters and zombies, as well as animated film crew scenes. Each scene is also broken down into individual components such as a skidding car or a director shouting. For those wanting to create MGM or Universal, all the iconic elements are here. They also fit well into city-based scenarios, bringing the bustling street vibes into your theme park.

Overall, Studios is very versatile and the inclusion of so many animated objects alongside track-based rides means creating a unique and exciting ride is far easier in Studios than many other packs. It matches up well with the Ghostbusters pack as well but that is a different beast, quite literally.

Due to the New York street-style setting of the Ghostbusters pack, and the fact it’s based on a movie, the two packs merge well. City parks in particular can be greatly enhanced with either pack and anyone who has been craving stunt shows should definitely check out Studios.

Copies of Ghostbusters and Studios packs were provided by Frontier for this overview. Both DLC packs are now available for Planet Coaster Console, with Ghostbusters priced at $14.99 and Studios priced at $9.99. However, unlike the Vintage and World’s Fair pack, there are no discounts for purchasing both together.