Just a few minutes into playing Ring Fit Adventure, Nintendo’s new fitness game that’s also a colorful RPG, I had worked up a minor sweat. Armed with a resistance band and a Joy-Con controller tightly strapped to my thigh, I jogged, squatted, and pressed my pecs to run through a colorful fantasy world, battling enemies along the way.

Ring Fit Adventure, out for Nintendo Switch on Oct. 18 for $79.99, is the next evolution of Nintendo’s efforts to marry fitness and video games. A successor to games like Wii Fit, the Nintendo Switch game is primarily controlled by a steering wheel-sized resistance ring — called the Ring-Con — attached to a Joy-Con controller. I hold the ring on its sides — at 3 o’clock and 9 o’clock — and squeeze it, stretch it, rotate it, and twist my body while holding it to perform attacks and other movements. The Joy-Con strapped on my leg detects when I squat, jog, and raise my knees, all of which translate into in-game movements. 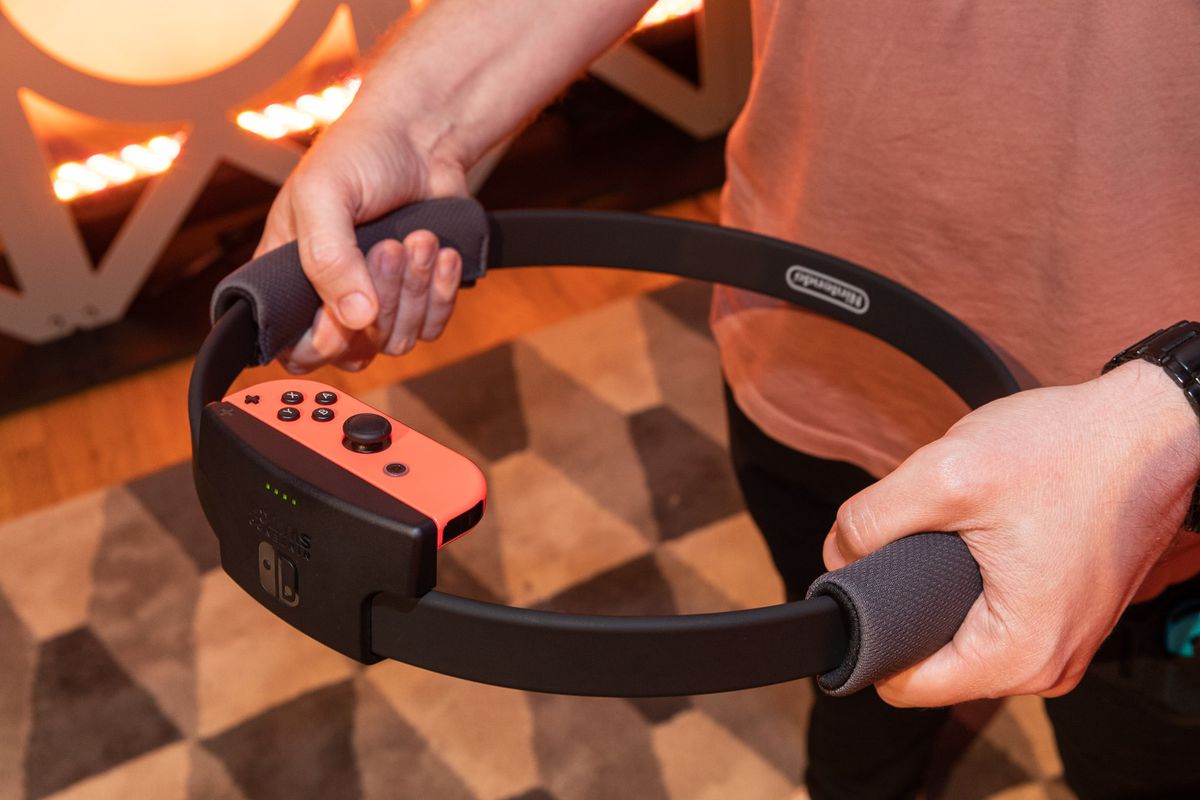 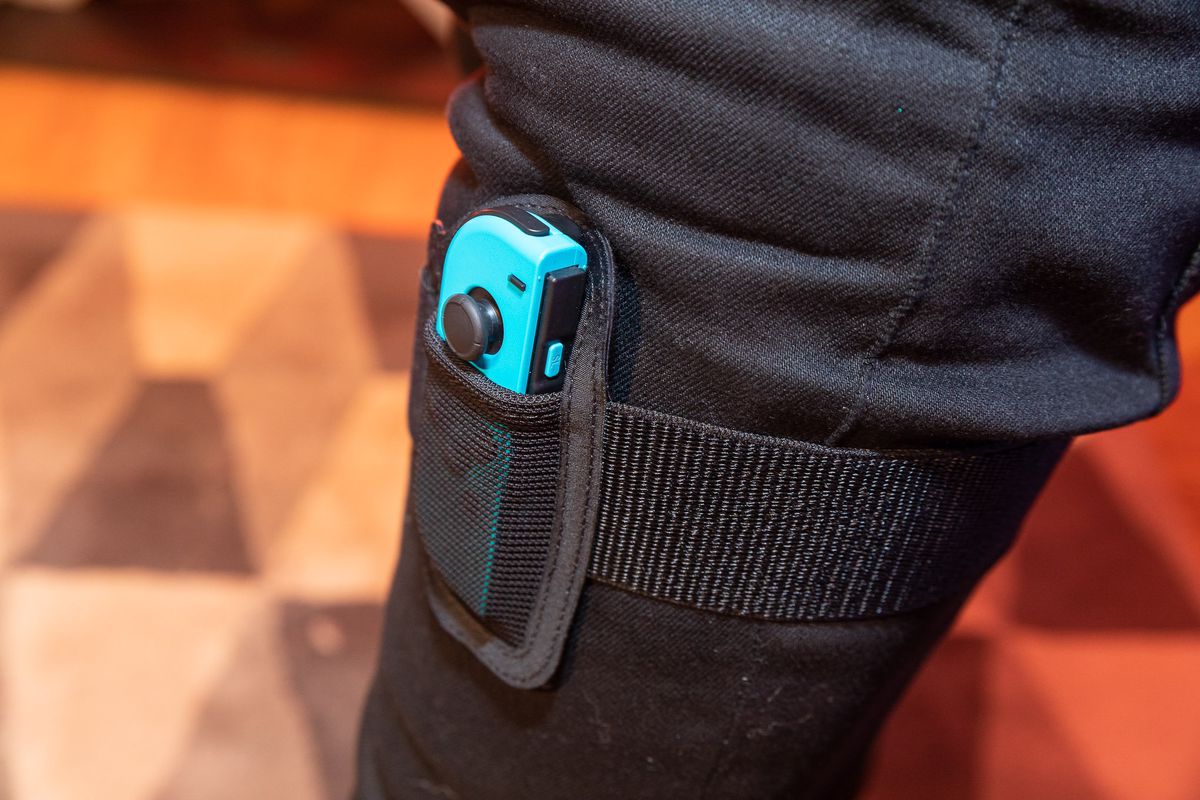 The main component of Ring Fit Adventure is a role-playing game set in a brightly colored fantasy world. My character, who looks like he just stepped out of an Equinox, finds a magical ring (cleverly named Ring) and the two go off on an adventure to battle monsters and a super buff, evil dragon who’s out here doing evil dragon things. I move through the world in stages, jogging in place to run on a set path, but I can also take side routes if I spot them in time for extra rewards. I smash open nearby treasure chests by squeezing the ring tightly, and vacuum up gold coins by pulling the ring outward.

The constant jogging in place paired with squeezing and stretching the ring controller was quite the workout. I never felt winded, but I could feel my heart rate quicken and I built up a sweat just a few minutes into the game. (After each level, I could measure my pulse by placing my thumb over the right Joy-Con’s infrared sensor. It said my heart rate was around 130-140 beats per minute.) 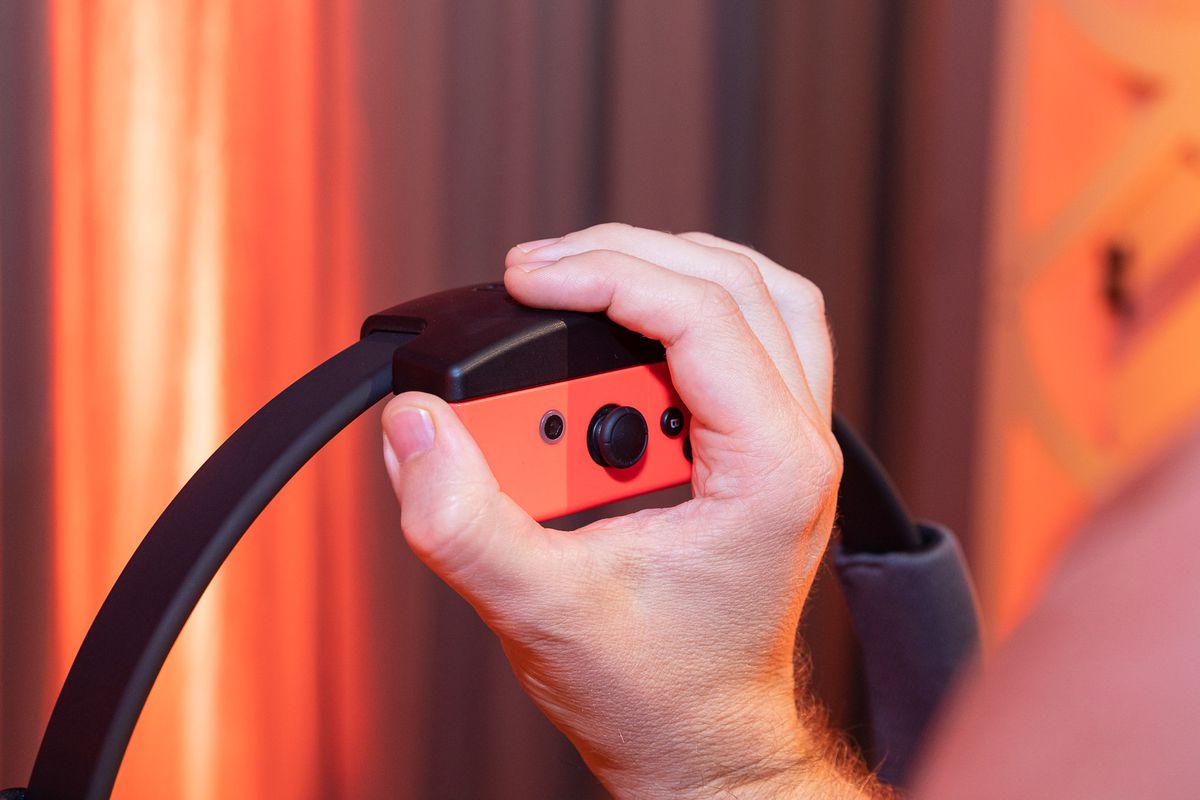 Using the Joy Con to take your pulse

As I move through Ring Fit Adventure’s fantasy world, I encounter enemies. Some are sentient yoga mats, while others look like angry anthropomorphic kettle bells. These encounters become turn-based battles, in which I use specific workouts to attack these monsters. I may have to do 10 squats or hold a plank pose to unleash an attack. I can defend myself performing an action called Ab Guard: I press the Ring-Con tightly against my abdominal muscles and hold it until the enemies’ assault is over.

My attacks are color-coded, and so are my enemies — a yellow-colored workout move like an ab crunch will do more damage a yellow-colored bad guy. I can select my “load out” of exercises to take with me into battle. Over time, I’ll unlock new exercises to add variety to my arsenal. It’s important to go into battle with a mix of exercises — strength training, cardio, yoga poses — so that I’m prepared for anything (and so I get a full-body workout).

Ring Fit Adventure’s story mode is compelling and polished. It’s filled with great, groan-worthy puns. In the role-playing game, I can unlock new gym outfits. I can collect ingredients to make smoothies that give my workout warrior buffs. It’s a thoughtful, fully-fledged adventure game that exudes Nintendo polish; and it sounds long. A Nintendo rep said that, played for about an hour each day, Ring Fit Adventure’s story mode could take months to fully complete. 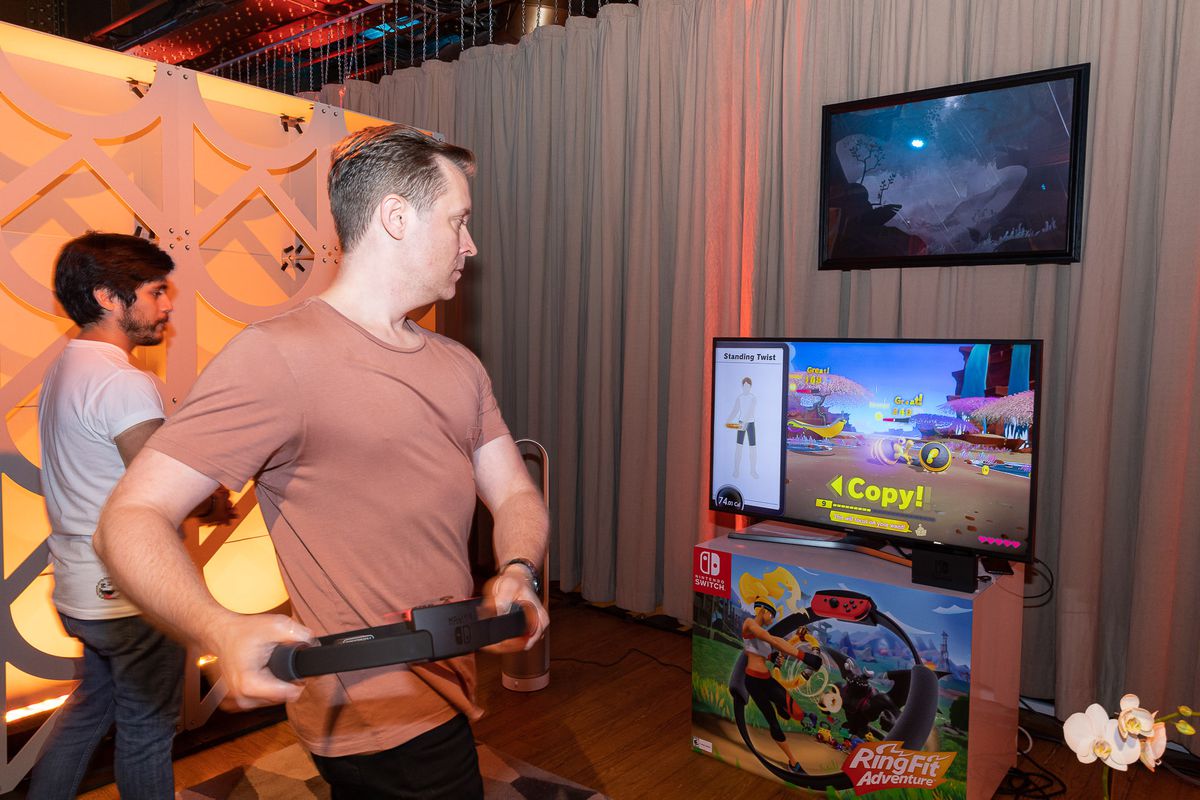 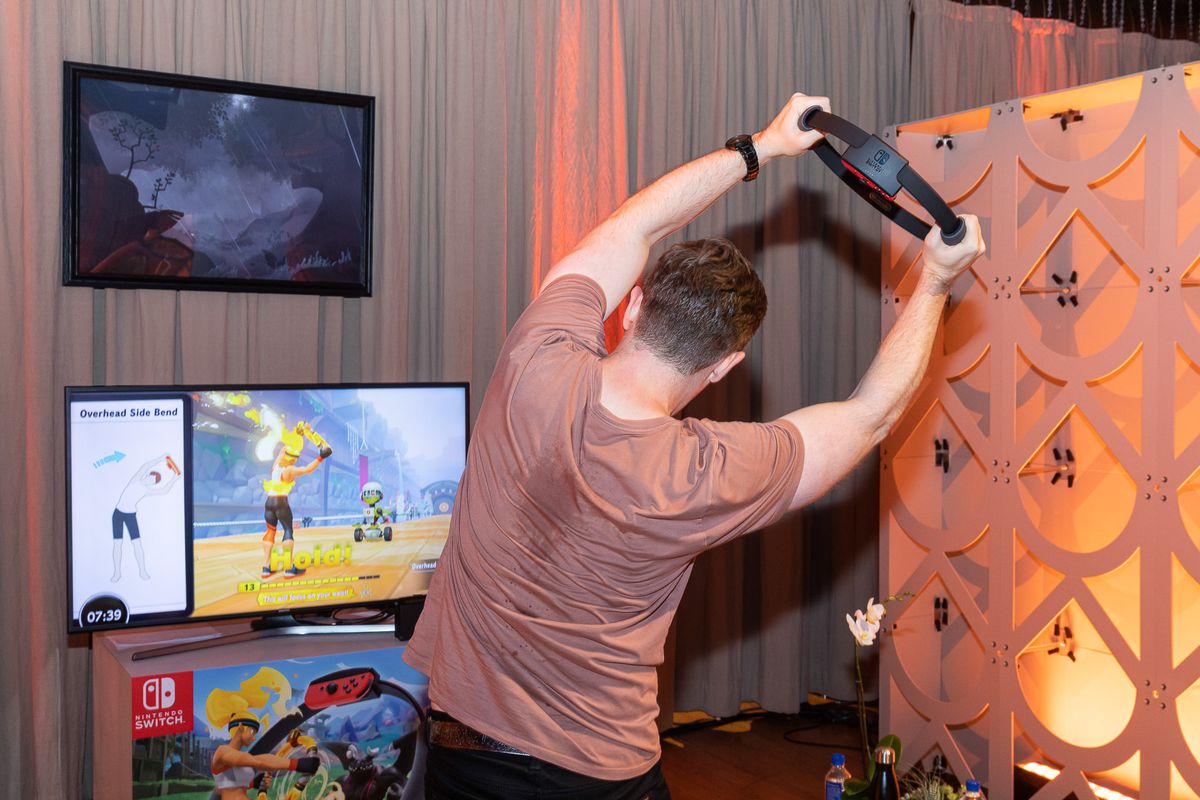 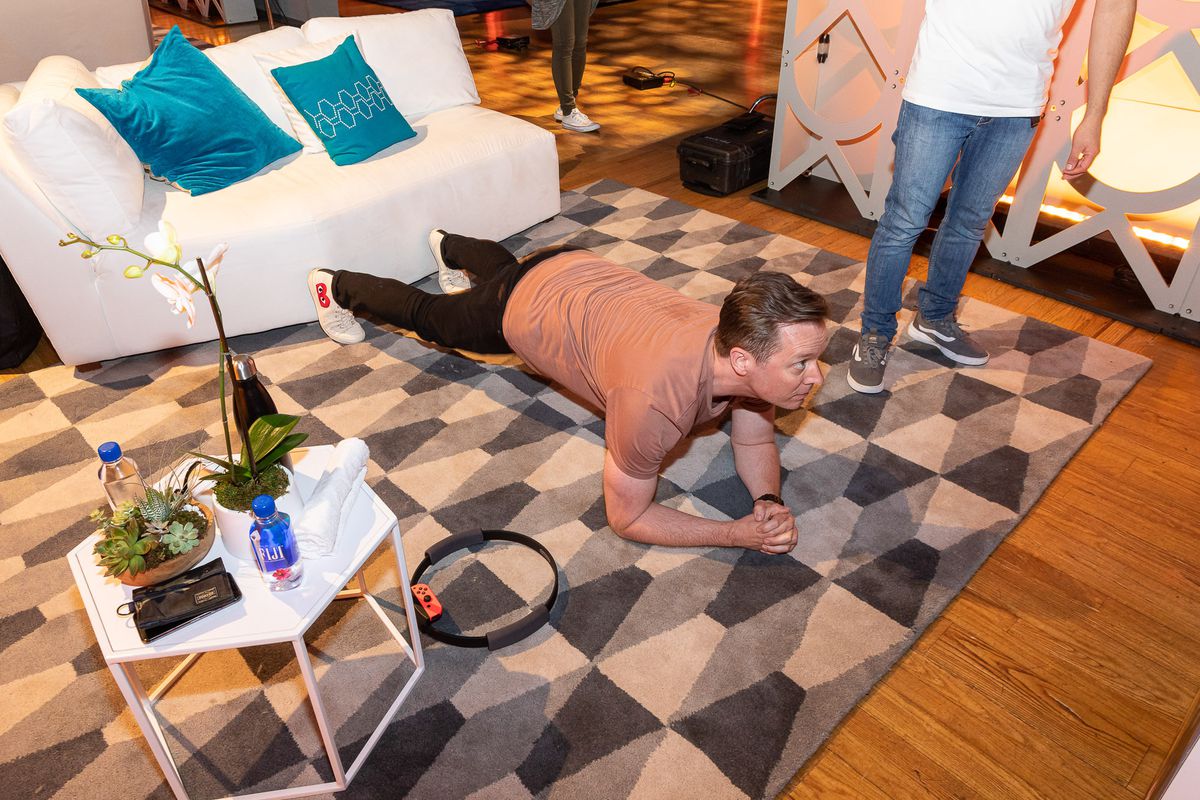 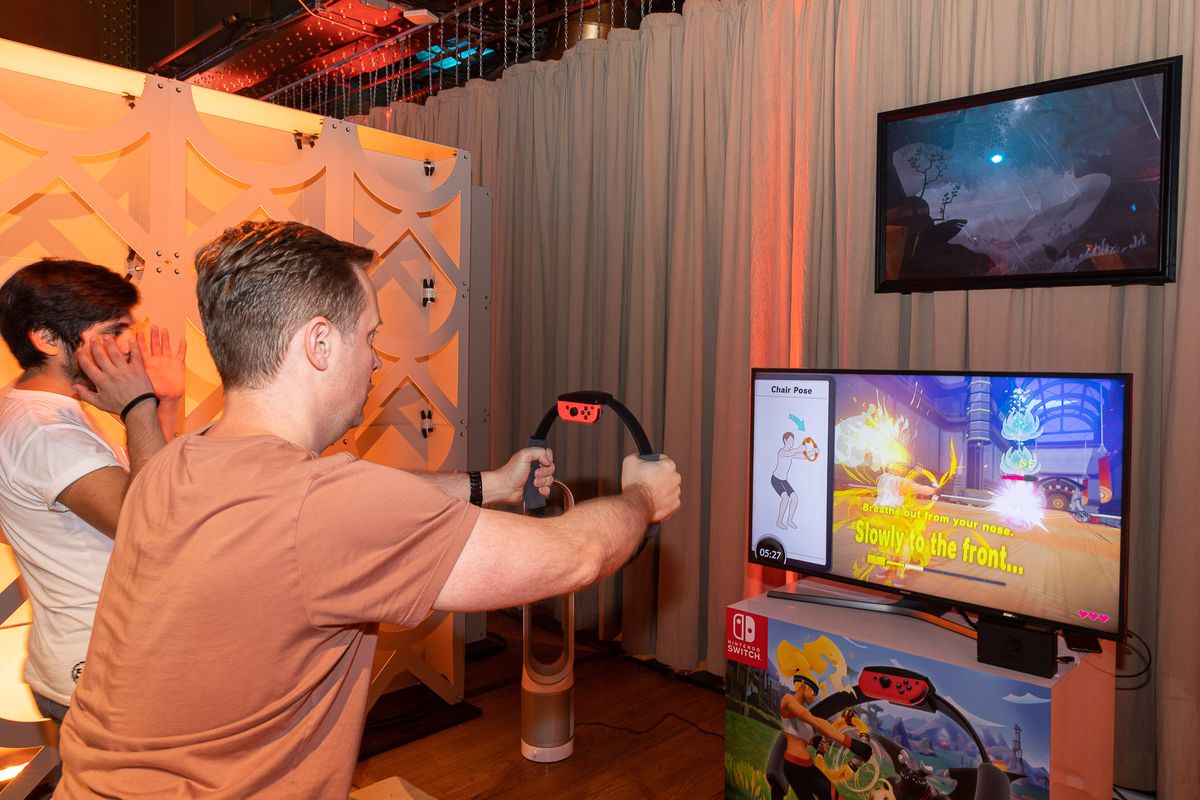 Outside of the main story are a handful of other modes, like custom quickplay workouts and minigames. I can put together a routine of a half-dozen exercises if I just want to get a 10-minute workout in, or I can shoot for high scores in a Whac-A-Mole-like game where I have to squeeze and stretch the Ring-Con in order to smash robots. One tough minigame I tried, Squattery, had me carefully squeezing the resistance ring in and out as I tried to turn a hunk of virtual clay spinning on a pottery wheel into the shape of a vase. I tried it with both my arms (not too hard) and my thighs (borderline impossible!) and made a pretty embarrassing art project.

Perhaps most surprising was a game mode called Multitasking that’s played with the Nintendo Switch powered off. When you go into Multitasking mode, and suspend the Switch, you can still squeeze and stretch the Ring-Con to get a workout while you do other things. Maybe you’re watching TV or taking a phone call, and you want to work your arms. The reps you do while in Multitasking mode will count toward your progress, and you can bank that offline exercise when you get back into the game to earn experience points. You can even gift those points to a friend or family member on your Switch, encouraging them to keep up their own progress in Ring Fit Adventure.

The side challenges and the main story mode of Ring Fit Adventure accomplish something impressive: They turn a fun, fleshed-out video game into a hearty workout. Nintendo has stealthily made cardio and resistance training enjoyable for people who might want to start exercising, but may not know where to begin. The on-screen instructions that show how each exercise is performed are easy to follow, and the game lets players work out at a pace and strength level comfortable to them. And the workouts feel more vigorous than those of Wii Fit games, thanks to the resistance of the Ring-Con device.

Ring Fit Adventure may look like Nintendo at its quirkiest, but this particular curveball for the Switch shouldn’t be overlooked. Your quads will thank you.