As I crouch in the bushes behind a brown, featureless hut with no doors, I can hear two men with vaguely Middle-Eastern accents talking inside. One of them is explaining that he thinks it might be time to get his daughter a cellphone. She’s younger than he’d like, but he gets worried about her when he doesn’t know where she is. These men are not my targets, but they have the unfortunate luck of being in my path. As they step out of the hut, I fire a silenced sniper shot directly into each of their faces. On the second shot, the bullet leaves the chamber in slow motion and the camera tracks it all the way through Cellphone Dad’s dome. His head explodes as if his skull were pressurized. Killing them nets me bonus points that I can spend to upgrade my guns. This is Sniper Ghost Warrior: Contracts 2.

Welcome to Kuamar, an amalgamated Middle-Eastern country ruled over by a despotic regime. You play as Raven, a contract sniper assassin, hired by an unnamed shadow organization with international interests to take down a dozen key members of the criminal syndicate that reigns down on the region with violence and fear. Though Kuamar has been under the thumb of President Omar Al-Bakr and his wife Bibi Rashida for more than 20 years, your benefactors have never had a reason to interfere — until now. “We have actionable intel Kuamar is planning an offensive against a neighboring state,” your handler explains. “A war here is unacceptable. It will disrupt the whole region, inflating global oil prices.” Oof.

Sniper Ghost Warrior: Contracts 2 functions as both a gritty military shooter and a parody of one. It’s pessimistic in its portrayal of state violence and has a “business as usual” attitude towards political killing. Yet, ultimately, it’s still a game about killing brown people in order to bring those same brown people “democracy and peace” (an actual phrase used in the game’s marketing). It may be the case that developer CI Games was attempting to provide commentary in a clumsy way, but I think whatever that message might be has gotten completely lost in a sea of exploding heads and stereotypical Middle-Eastern demonization. At one point, Raven questions why one of his targets uses his power to hurt his own people. His handler suggests that Raven must not have the same politics as his target, to which Raven responds “I don’t have any politics.” Contracts 2 has about as much brains as Cellphone Dad, and his are all over the wall. 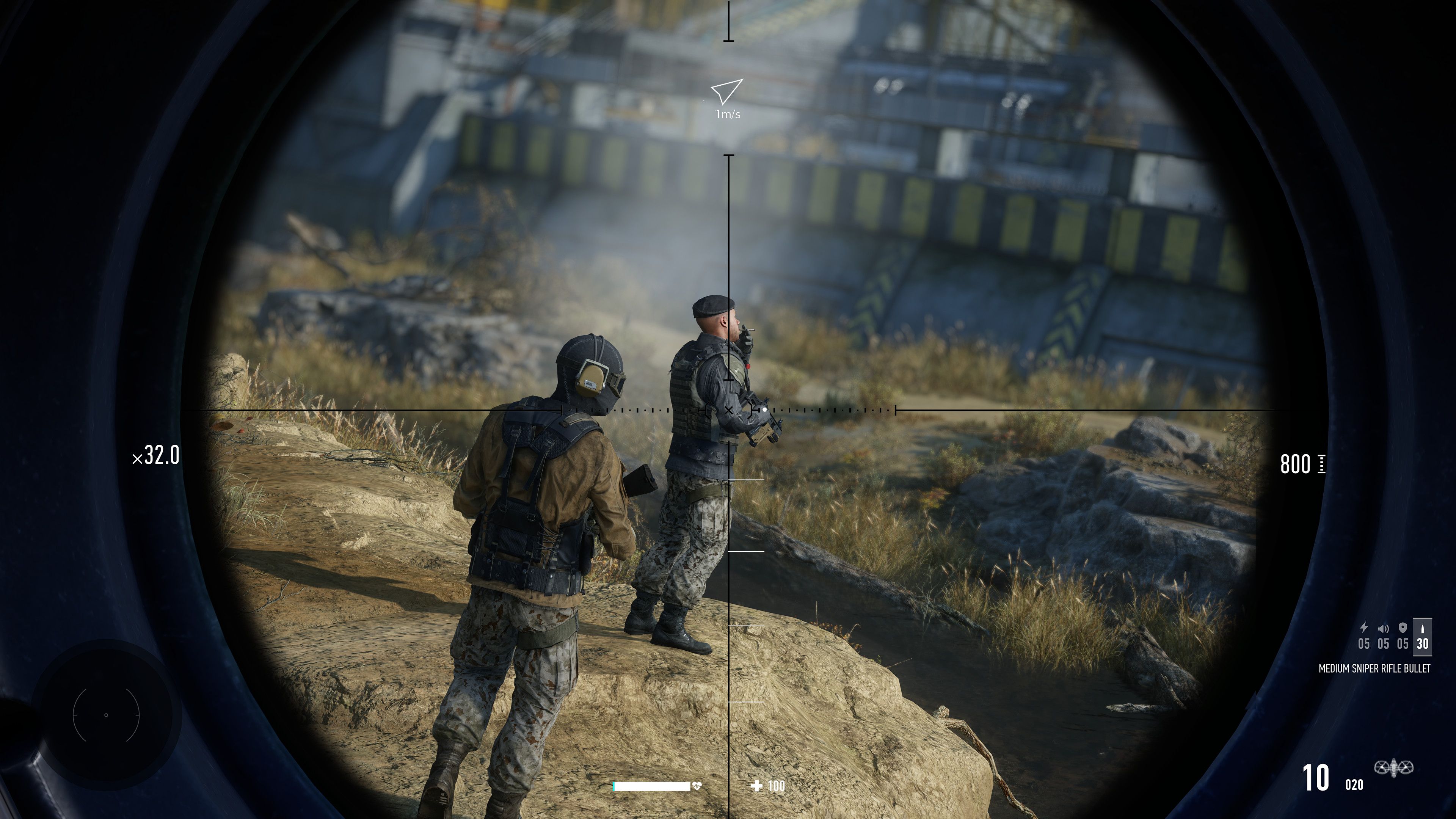 The best and only way to engage with this game is to meet it on its level and turn your brain completely off. It’s enjoyable in the same way 50 Cent: Blood on the Sand is enjoyable, and it’s at least pretty to look at, which helps with the whole turning your brain off thing. The five regions you get to explore are vast and gorgeously rendered. It looks mind-blowing on the highest settings, especially on a 32:9 super ultrawide display, which is a format double-A games don’t often support. It also has a level of polish I don’t think players would expect from the series, at least prior to the Contracts subseries.

Each region features several contracts as well as a variety of objectives to complete. Additionally, each objective has optional Hitman-style conditional objectives, such as killing the targets without being detected or completing an objective in a certain way. While the replayability is certainly there for people who like to cross things off the list, it’s nowhere near as dense as the Hitman series, which I think is totally fine for a game this size.

Missions are either Classic Contracts, where you’ll stealth your way from objective to objective sabotaging systems and picking off targets, or Long Shot Contracts, where you’ll make your way to vantage points for some extremely long range sniping. These long range missions end up being the real standout levels in Contracts 2 because of how much variety and clever problem-solving goes into them. They’re almost like puzzle games at times because you have to use your bullets to interact with the environment in a lot of different ways.

In some circumstances, you may want to locate and take out control boxes to shut off alarms, or lure out your target by shooting a mechanism to make a car fall in a nearby mechanic shop. Other times, you’ll need to take out all the snipers in an area before creating distractions to separate your target from his bodyguards so that you can make an escape before anyone notices he’s dead. In one mission, you have to snipe a guard while he’s in front of a jail cell so that the prisoner can reach out and grab his keys, then escort the prisoner to safety by sniping anyone that crosses his path as he makes his escape. There are almost always different methods you can use to complete these Long Shot Contracts, and I found that these missions offered a fascinatingly unique approach to classic stealth mechanics. You can really feel the distance from your targets in the way you have to account for wind, distance, and time when taking your shots. It can take up to three seconds for a bullet to travel, and I found myself holding my breath with each shot as I waited to see if it would land where I intended. 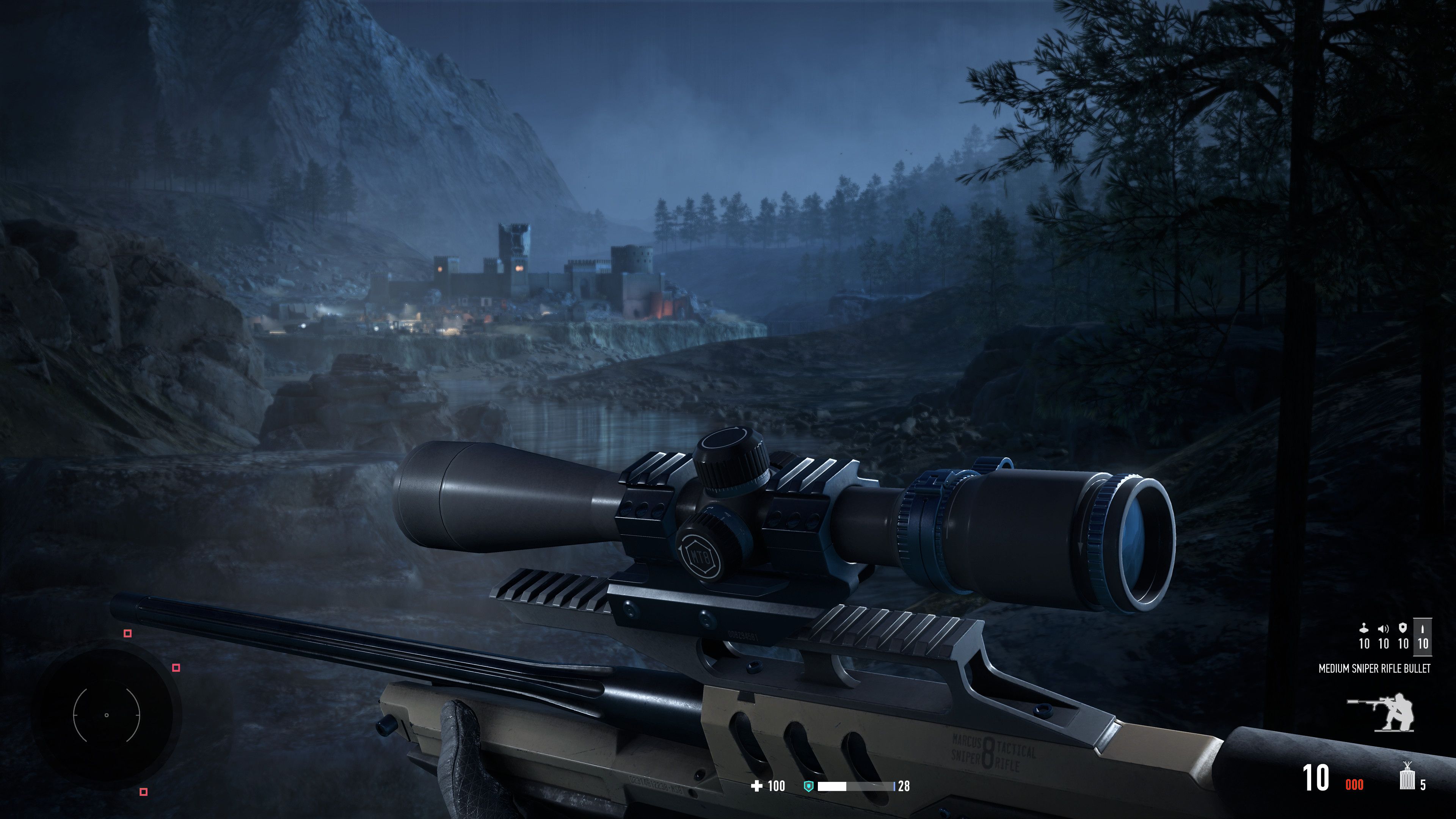 Classic Contracts are even better. The Mount Kuamar contract starts with an objective to disable three jammers in the region that block surveillance and communication between you and your handler. After that, there are a number of objectives you can handle in any order: destroy the main antenna so that the people of the region can have access to the internet and foreign media for the first time, disrupt the water pumps at the cooling station to take the bad guy’s servers offline, and of course, kill the target. After that, you’ll need to make your way down through an elaborate underground facility, find the Citadel’s mainframe, and upload a virus. This mission feels like a James Bond movie, and all the objectives are jam-packed with variety and thrilling moments. I found myself really digging into the wide range of tools available to Raven in this mission: the surveillance drone for marking targets, the auto-turret for setting up perfectly timed shots, and the specialized bullets like the EMP rounds for disabling turrets and the gas arrows for incapacitating groups of enemies.

It feels like there’s an infinite number of ways to approach each mission and the game gives you plenty of tools that let you play your way. As a Hitman and immersive sim fan, Contracts 2 scratched a pretty big itch. Your playstyle also feeds into your upgrade paths in a pretty elegant way. If you play the game like a serial killer and go out of your way to gun down every person you see, you’ll get extra money at the end that you can spend on upgrading your weapons. On the other hand, if you are stealthy and you focus on completing the optional bonus objectives, which are typically stealthy in nature, you’ll earn additional development points that you can spend on new skills and tools that help you be even stealthier. I ended up with about half of each after a single playthrough, but those upgrades and purchases may be enough to bring me back for more. 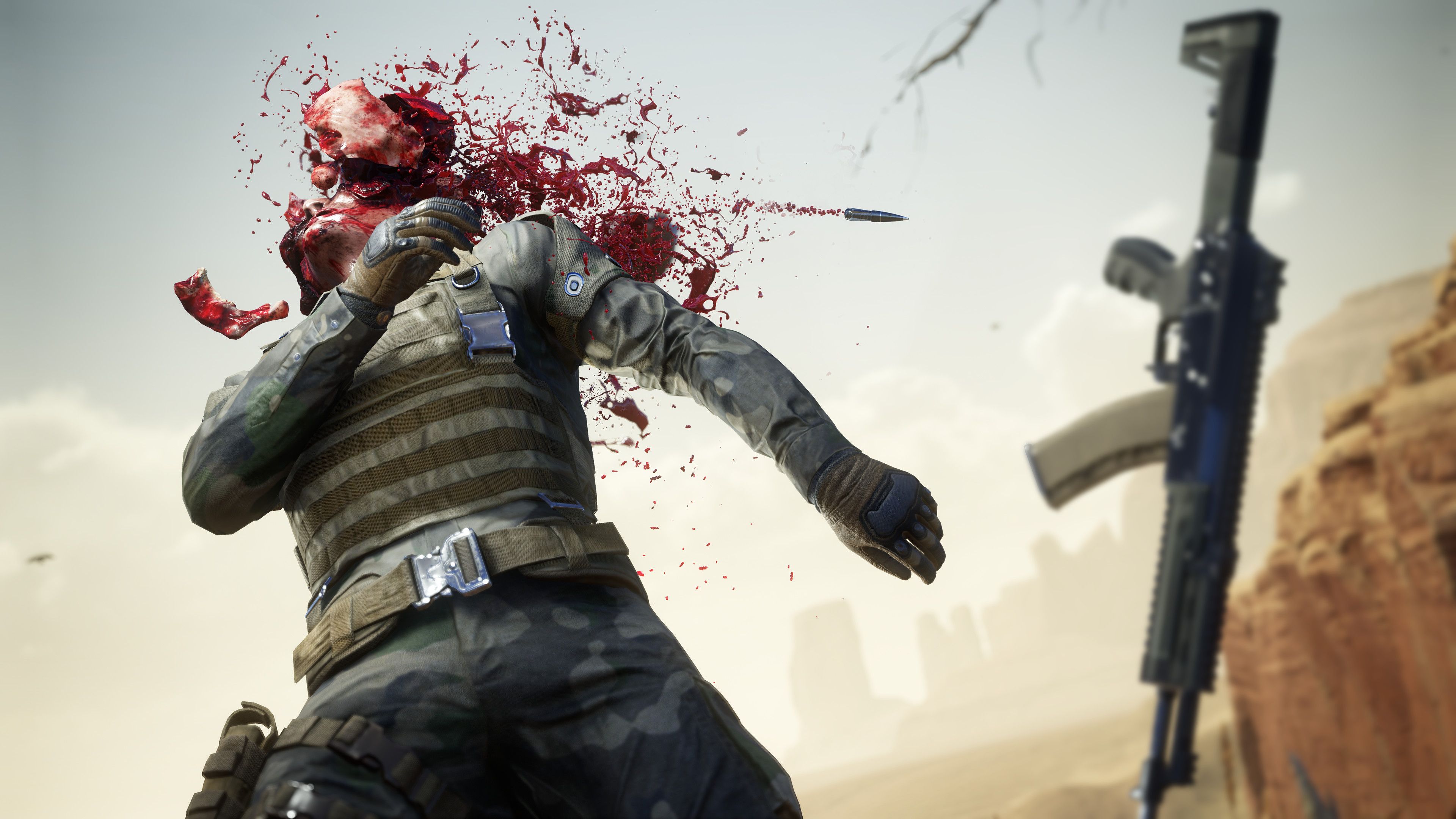 The other thing I really appreciate about Contracts 2 is how varied the difficulty settings are. Not only do the higher difficulties disable aim helpers and hud assistance to give you a more realistic sniping experience, but they’re also much more demanding. You absolutely can not run and gun your way through Dead Eye, the hardest difficulty, and I found myself needing to use tools I’d never needed before and look to solve problems in new ways on this difficulty mode. This is a game that only gets better as it becomes more challenging, so I recommend playing on at least Veteran Sniper mode once you get the hang of it.

Ultimately, Sniper Ghost Warrior: Contracts 2 is a really strong stealth shooter in an unfortunate package. Whatever tongue-in-cheek thing CI Games was trying to do with the sympathetic collateral victims and the casual approach to political violence totally didn’t land for me. It didn’t make me feel guilty for playing it a la Funny Games, nor did it lead me to contemplate the deeper meaning of its themes like The Last of Us Part 2. I won’t spoil the ending, but there’s a twist that suggests that all of the horrible things you did to bring freedom to the Middle-East was in vain, and that this is a cycle that will be endlessly repeated. Whether that’s an indictment of the Middle-East, foreign involvement, or mankind in general, I have no idea, and I don’t imagine Sniper Ghost Warrior: Contracts 2 does either. I certainly enjoyed the game a lot despite this though, and I think CI Games has established a winning formula for the future. It’d be even better if it had any idea what it was trying to say.