The Super Mega Baseball games have always been bursting with charm, delivering the trappings of semipro sports with a goofy sandlot spin. The series drew me in with its silly fictional athletes and ballclubs, a world of lovable chuckleheads that I got to know over the course of two terrific video games. I never expected that Super Mega Baseball 3 would weaponize those emotional ties in the best way, turning my attachments to my favorite teams and players against me in its excellent, demanding franchise mode.

With the original Super Mega Baseball in 2014, and its 2018 follow-up, Canadian indie studio Metalhead Software brilliantly captured the spirit of the simple, fun sports games that many of us remember from our childhoods. But rather than reviving the exaggerated power-ups of NBA Jam and NFL Blitz, this series blends the cartoony essence of Backyard Baseball and Power Pros with a sound baseball simulation. Where else can you play as a team called the Sirloins, and mash home runs with a mutton-chopped slugger named Hammer Longballo?

Of course, the Super Mega Baseball games wouldn’t have succeeded without a foundation of rock-solid baseball mechanics beneath the surface. But it was the combination of the action on the field and the humor infused into everything else that turned Super Mega Baseball from a novelty series into one of the best success stories in sports video games. There’s nothing quite like it on the market these days.

Now, Metalhead has upped its game once again. Super Mega Baseball 3 is a capstone for the acclaimed series, the fulfillment of a mission that the studio embarked upon almost a decade ago, when it began working on the first game. That’s partly because Metalhead further refined its simulation of baseball this time around. But the new feature that ties everything together and elevates Super Mega Baseball 3 into a complete package is a proper franchise mode, the centerpiece of any long-lasting sports title.

The first two games only let you play through a single season. Franchise allows you to take the team of your choice — including ones you’ve created or customized — through multiple seasons. It’s not as deep as the franchise modes in simulation sports titles like NBA 2K or Madden, but that’s for the best. Instead, its simplified design fits the ethos of Super Mega Baseball: building a connection between you and your players.

I love a good steak, so the aforementioned Sirloins were my team of choice in the previous games. But they’re always described as “extreme power hitters.” I thought I’d be better off with a more balanced roster in the franchise mode, so I switched my allegiance to the Sawteeth. Thus began my love affair with players like Jon Ronero, the power-hitting shortstop with the same beefy physique as the game developer he’s named after; DP Turner, his double-play partner at second base; and Slash Trips, the speedy center fielder who ranked near the top of the league in multiple hitting categories during my franchise’s first year. (If only the mode tracked stats from season to season.)

These days, many fans of pro sports have resigned themselves to rooting for laundry — that is, they have favorite teams instead of athletes, because players move around all the time. The Super Mega Baseball games are instead personality-driven, with players who are characters as much as they’re virtual athletes. Over the course of my franchise play-through, I became invested in not just the Sawteeth as a team, but in the individual members of its roster, whose skills naturally progress or regress depending on their age. I ended up agonizing over every personnel decision.

Each of the 14 ballparks in the game comes with day, night, and alternate lighting conditions, and the games set at dusk look particularly gorgeous.
Image: Metalhead Software

Two of the Sawteeth are related: Junior Young Sr., who is somehow still playing catcher at age 42, and Junior Young Jr., the backup first baseman, who is 22 years younger than his dad. With the elder Young’s performance flagging and his attributes dropping, it made sense to let him go before he retired in the offseason. I did so, but I waited longer than I otherwise might have, because I was saddened by the idea of separating father and son. I rarely get that sentimental in MLB The Show, even about my beloved Yankees superstars.

The setup of the franchise mode incentivizes strategic roster moves like that; it challenged me to put aside my emotional attachments and think through the longer-term implications of every decision. While you can’t make trades, you can change your roster through free agency. Signing and releasing players is always a one-to-one action, so if you’re looking to pick somebody up, you’ll have to cut a player to make room. If you’re chasing a high-priced free agent, you’ll probably have to dump an expensive player to ensure you can afford the signing under the hard salary cap.

There are no direct negotiations, but free agents start the season with absurdly high salaries and lower their expectations over time. A few coveted players slipped through my fingers over the course of the season and offseason, signing with other clubs while I kept hoping they’d drop their asking prices. There’s something thrilling about the drama of the chase, checking after every in-game day to see whether a player remains available.

The franchise mode’s interface is pretty busy, but it gets the job done, providing updates on transactions around the league and on your players’ progression/regression. (By the way, just four games before this, Chasey Kim had been asking for $8.5 million.)
Image: Metalhead Software via Polygon

Free agency isn’t the only way to improve your team. Any budget surplus (the gap between the $140 million salary cap and your current payroll) gets doled out to you over time in the form of “player development funds.” You can spend this money on training opportunities that will raise your players’ attributes. The gains tend to be small, and the sessions that really pay dividends tend to be expensive — often costing well over $1 million — so I chose to focus on making major upgrades via free agency rather than incremental ones via training.

Development opportunities sometimes come with the chance for a player to gain a “trait,” a situational buff/debuff. This is one of the ways in which Metalhead has deepened the strategic layers of the game in Super Mega Baseball 3, making me think like a manager trying to play the percentages. I always slotted Junior Young Jr. into the lineup when facing southpaws, since he has a trait that raises his (already high) power rating by 10 when batting against a left-hander.

Metalhead also worked to make Super Mega Baseball 3 more representative of the sport of baseball, bringing in fundamental elements like pickoff throws, wild pitches and passed balls, and the designated hitter rule. Aside from the DH, I can’t say I really missed those features in the previous two games. But now that they’re here, I find myself wishing for finer control options, like the ability to adjust baserunners’ leads or to decide when and how they slide — features that would give me more agency in the moment-to-moment gameplay.

Another feature that would improve Super Mega Baseball 3 is additional animations, and better animation blending, for fielding and throwing. Perhaps this is top of mind because there were upgrades in this area in MLB The Show 20 earlier this year. But I’ve run into instances of players taking too long to get rid of the ball, since there doesn’t appear to be a whirl-and-throw animation in Super Mega Baseball 3; instead, the cutoff person usually has to turn and then take a step before firing the ball toward home plate.

Other than those few desires — and, perhaps, the option to enable a landing circle for balls in the air — I’d have to really dig to come up with complaints about the gameplay in Super Mega Baseball 3. But I have had some minor technical problems in 20-ish hours with the Windows PC version of the game. While I’m generally able to play on max settings at a solid 60 frames per second in 1920×1200 resolution, there seems to be a regular issue with a momentary dip below 60 fps after a ball is hit into the air. Thankfully, it hasn’t affected any outcomes.

That’s what matters most in any sports game, and Super Mega Baseball 3 is still a thrilling, engaging, fun baseball experience on the field. I fell in love with Metalhead’s games from the start, enjoying elements like the innovative pitching controls — still one of my favorite mechanics in any baseball game I’ve ever played — while I giggled and smirked at the players’ ridiculous names. With its smart, engrossing franchise mode bringing it home, Super Mega Baseball 3 is another fantastic entry in what has become one of my all-time favorite sports series.

Super Mega Baseball 3 is now available on Nintendo Switch, PlayStation 4, Windows PC, and Xbox One. The game was reviewed on PC using a Steam download code provided by the developer. Vox Media has affiliate partnerships. These do not influence editorial content, though Vox Media may earn commissions for products purchased via affiliate links. You can find additional information about Polygon’s ethics policy here. 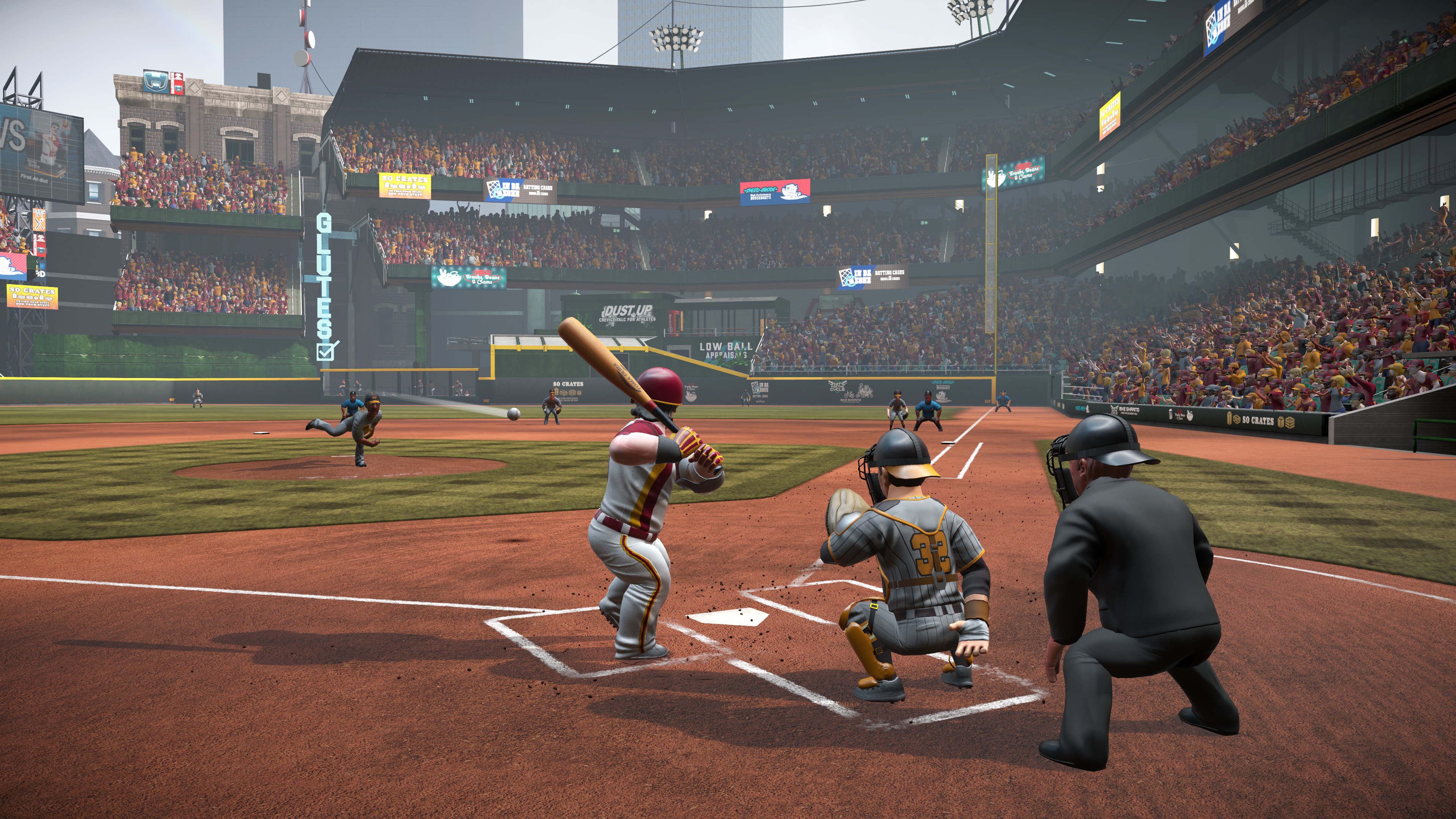