“Point Blank really started something for me,” Deathloop art director Sébastien Mitton tells me. “[Movie director] John Boorman did a really great job on visuals, and the palette for the costumes and the decor, the elements of the background to fit the costumes.”

When Deathloop begins, it’s full of colour and fury. I won’t spoil the opening, but it’s in your face, bright and brash – and then everything fades to black. When we re-enter the world, we are looking out to sea from Blackreef, a fictional isle based on the Faroe Islands. The sand is dark, the ocean is bleak, and the volcanic rocks surrounding the beach are blackened, rough, and rugged.

We head through a dingy hideout and crawl through a dark cave, emerging on the other side to red-tinged rocks with a modernist building – Tudor-era brick on the right, brutalism to the left – that’s somehow both sitting at the top of the cliff and hanging over the edge at the same time. As we head inside, we’re treated to postmodern decor and flashes of rich reds in the carpets and other fabrics.

In Point Blank – John Boorman’s hardboiled, neo-noir crime thriller – the early scenes wrap the characters in grey suits. They’re sitting on grey sofas with grey curtains blocking out the sunlight. As the movie progresses, more vibrant colours start to emerge: men wearing green, and mustard shirts popping next to the yellow decor of the ‘60s-era sets. This colour progression continues through the film, with each scene having its own primary colour, adding uniformity to the shots.

Boorman says the technique was inspired by impressionist painter Pierre-Auguste Renoir, and that European arthouse-style influence smashes against American filmmaker stylings. It gives the movie a timeless, dreamlike, stylised look. It’s a brave, experimental film, and now Mitton has pointed it out, it’s hard not to see some of the same qualities in Deathloop.

When we enter the next location – a VIP party in a district called Updaam – we’re treated to Kubrick-esque patterns and shapes, while mustard hues adorn the decor and clothing. Each area in Deathloop has a distinct vibe. 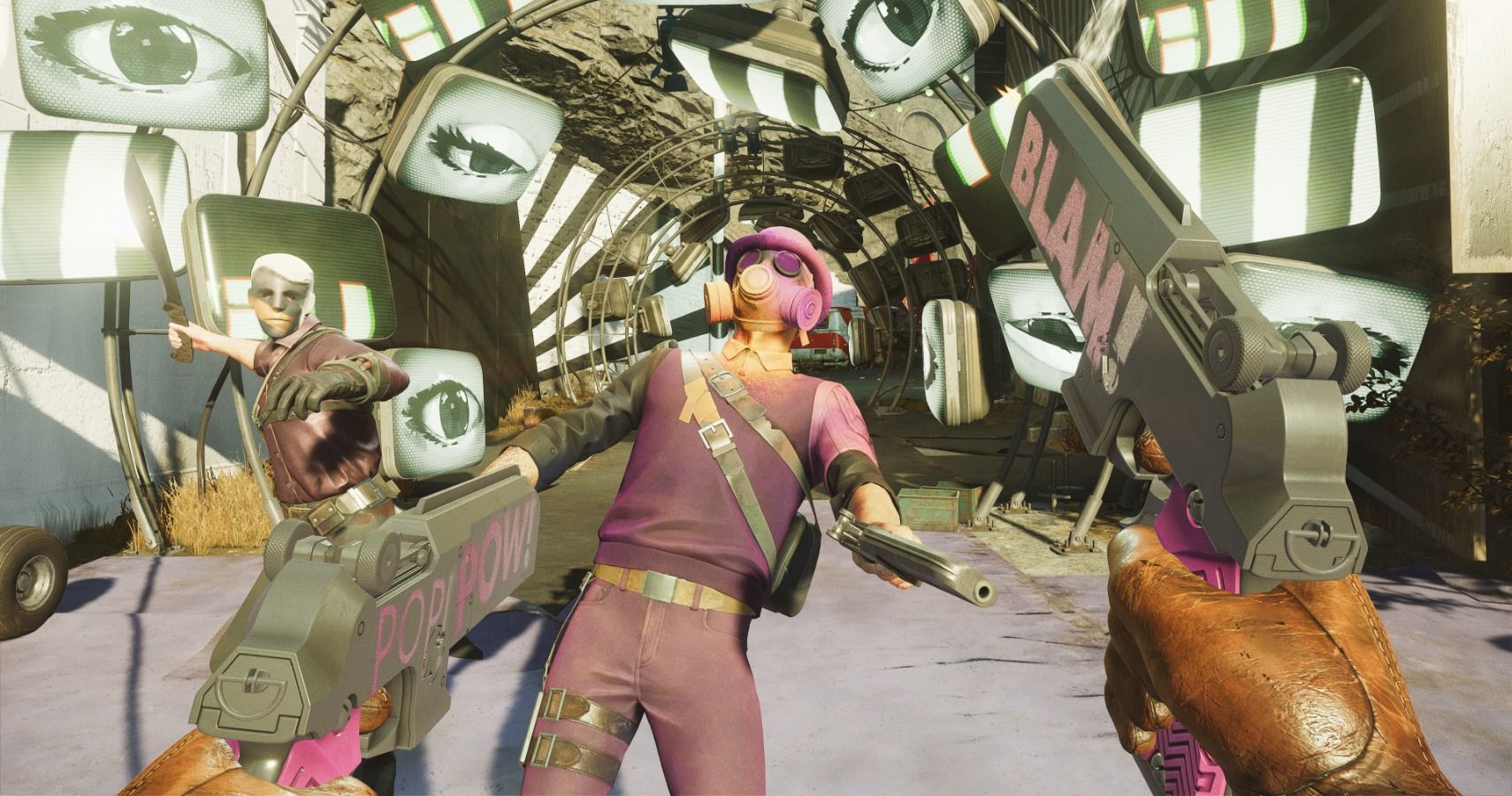 “We looked into comic books as well, because there’s a graphic style that’s very strong, very pronounced, even though [Deathloop is] not comic book style,” Mitton says. “It does inform the posters and the design in the typography, the design for the ammo boxes, for example.”

Another area Arkane looked for art inspiration was books on design for laboratories, props, and machines built by NASA. But because Arkane doesn’t have the rights to the objects found in its research, the team reverse-engineers its influences to see how things tick. Once they have the process down, they rebuild things from scratch within the visual parameters and setting of the studio’s games.

“It’s really interesting to understand how it works,” Mitton explains. “With the needs of narration, we can recreate something that will fit those needs. And every time we have to learn some new methodology for Dishonored games, for example, we had to learn how to work with wood and metals to use energy, which isn’t electricity that we have in our houses. So it’s really interesting, because it pushes us further than just taking something that exists and reusing it – we have to think about it, sketch and take notes.” 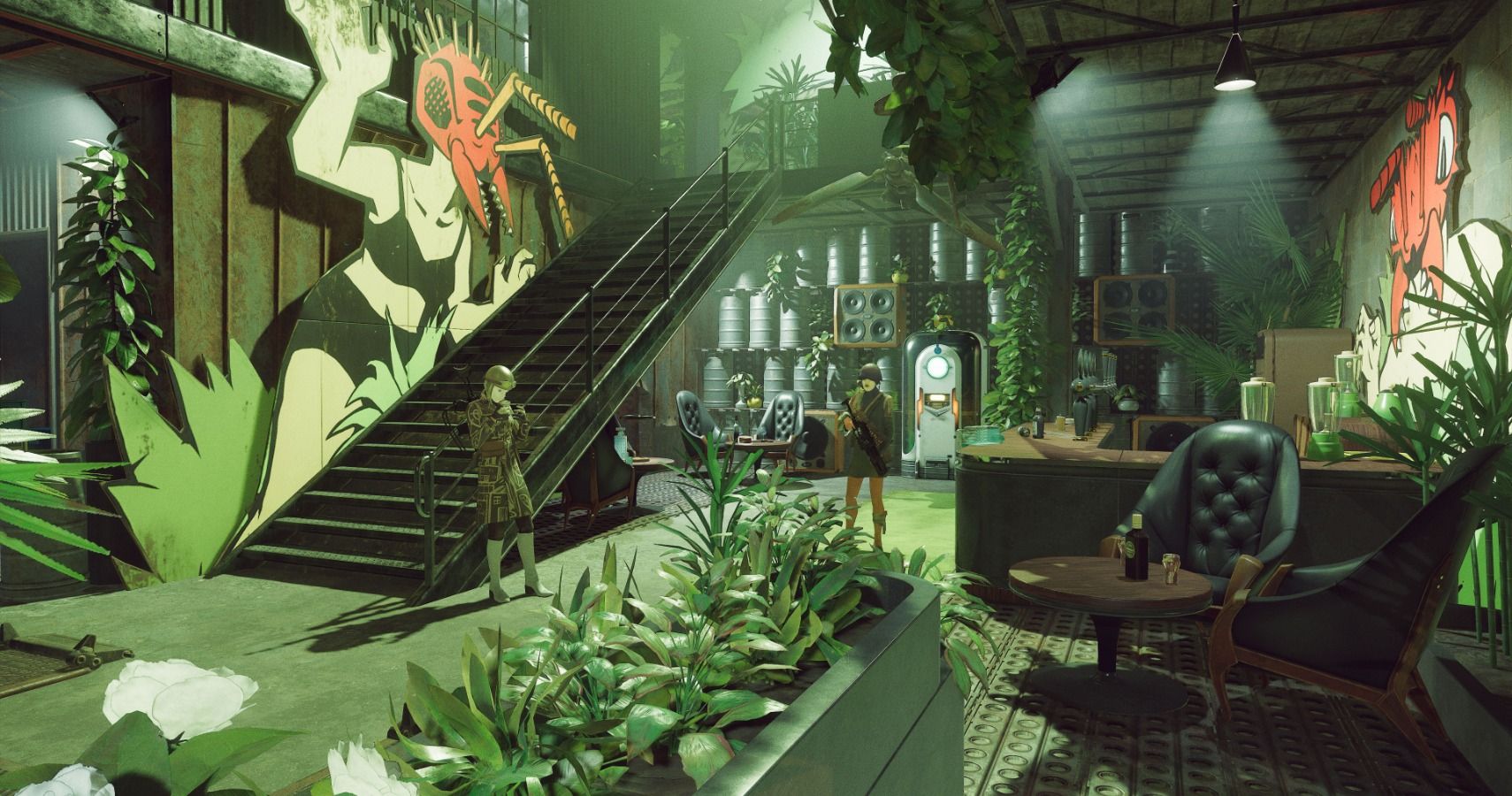 NASA also inspired the team outside of Deathloop’s props. Before Buzz Aldrin and Neil Armstrong pulled off their moon landing mission, they went to the most desolate corners of our Earth to simulate the harsh conditions they’d face on the lunar surface.

“So they take this lunar module with them,” Mitton says. “And we have all these notes from the team, from the Apollo 11 team, and all their photos that really informed us on how to take photos and how they thought about things in the ’60s when they took photos. So that was really interesting. In Dishonored, we did a lot of reading on banana republics, pirates, the plague. And this time we really concentrated on visuals and photos.”

It shows in the work because Deathloop is the most visually distinct triple-A game releasing any time soon. You can see for yourself when it launches for PS5 and PC on September 14.