I’ve played few games that have actively tried to make me hate them as much as The Dungeon Of Naheulbeuk (which also has the subtitle, The Amulet Of Chaos, because the name wasn’t wordy enough already.) From the very start, it bombards you with bad jokes, hateable characters, and irritating voice acting, which is disheartening because the game’s strategic gameplay is fairly decent, even bordering on good. The mechanics could be strong enough to keep most people playing, but Neheulbeuk’s dialogue and writing are so awful that they’ll make even the most enthusiastic strategy fan run out of this dungeon screaming. 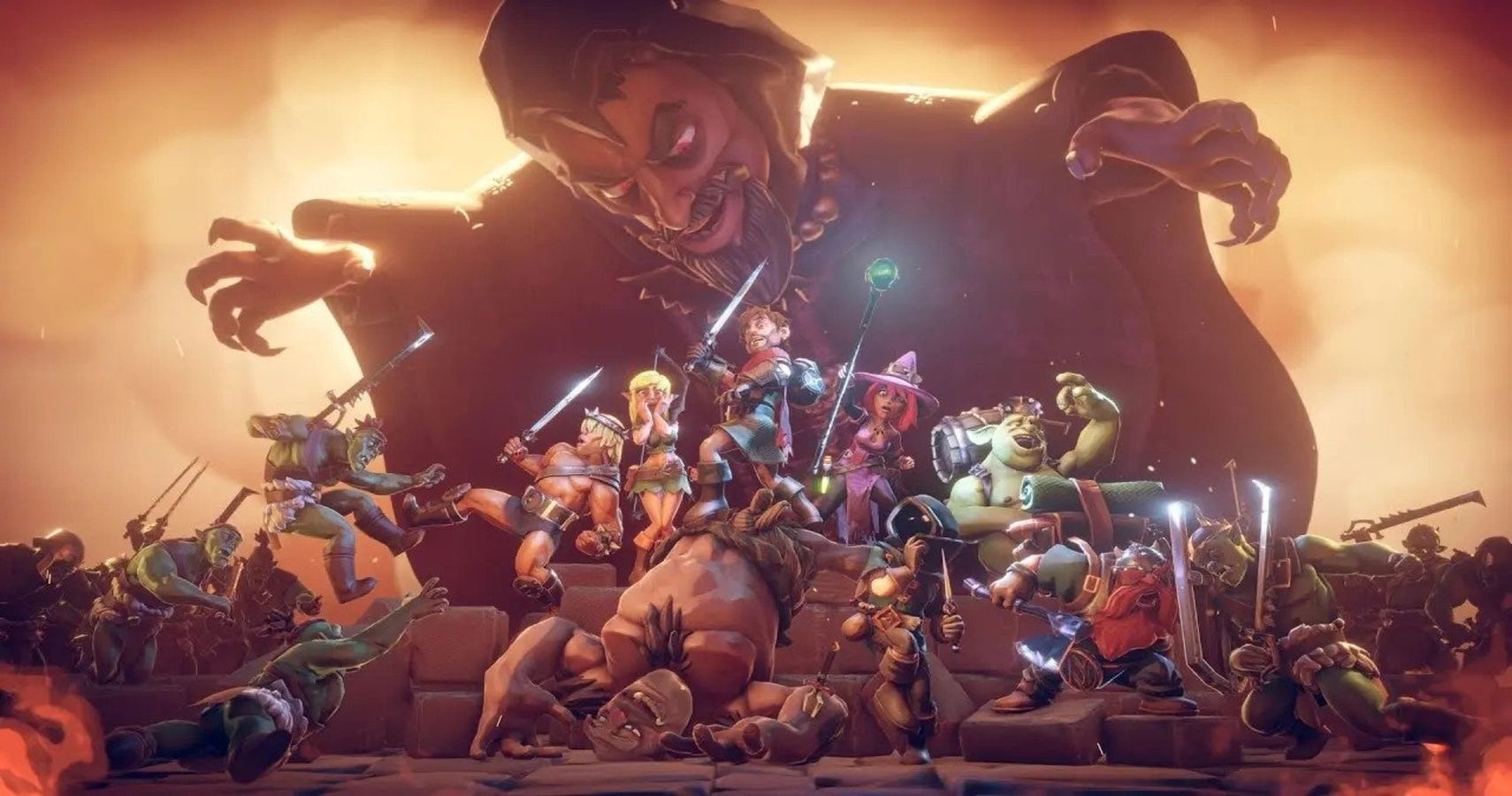 Every Joke Is A Dagger Through My Heart 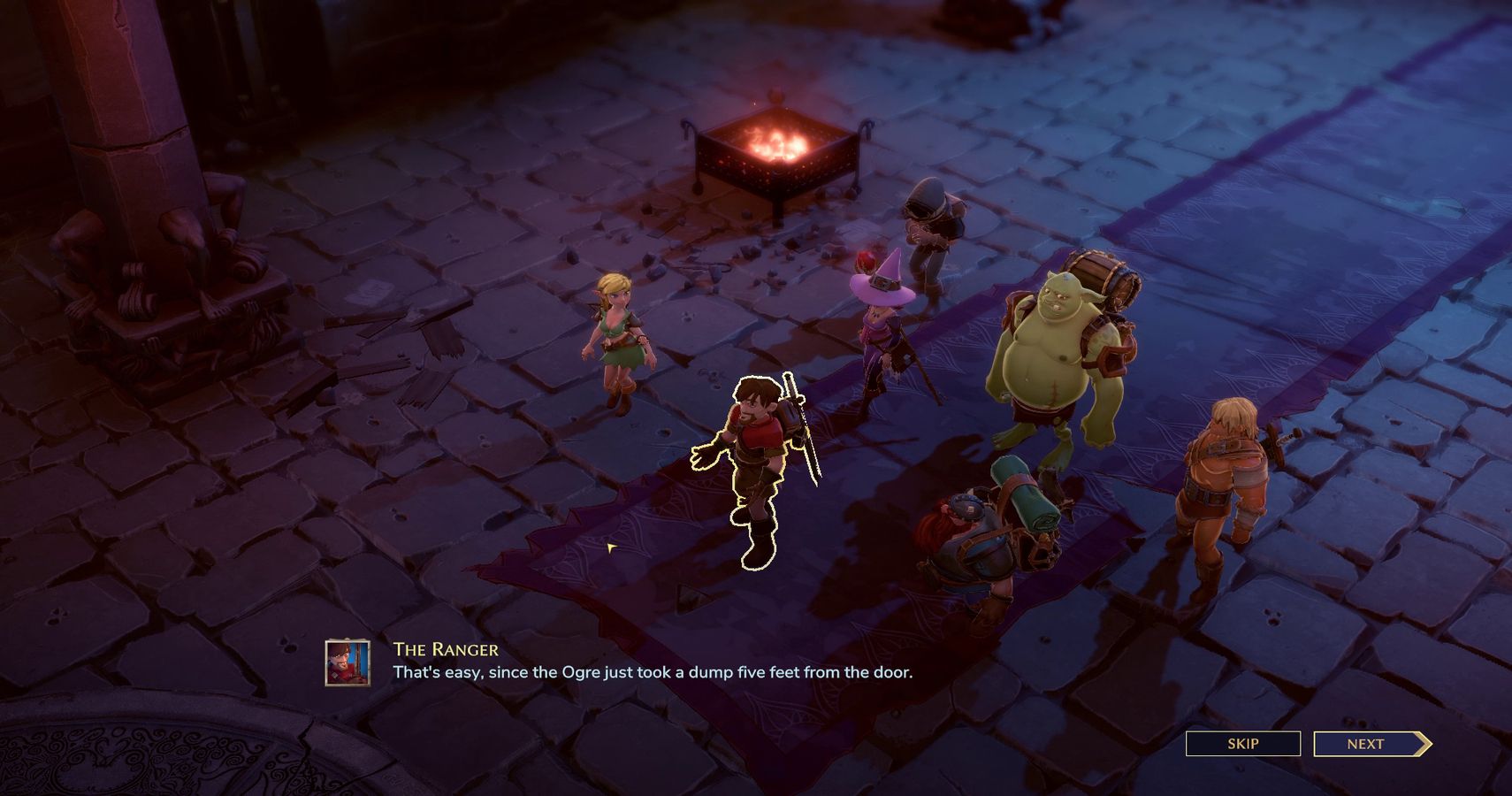 In Naheulbeuk (God, I hate typing that word out) you play as a band of amateur adventurers on a quest to retrieve a mysterious statuette from a monster-filled dungeon. The characters are all parodies of your typical cliched fantasy characters. There’s the over-confident yet incompetent Ranger, the dim-witted Elf, the crass Dwarf, the cowardly Thief, the bloodthirsty Barbarian, the oafish Ogre, and the inexperienced Wizard who essentially plays the straight-person role. As they progress through the dungeon, they come across a tavern full of adventurers along with other things you wouldn’t normally find in a dangerous underground stronghold. They then get themselves into a series of wacky misadventures as they try to complete their first quest.

I’m frustrated with this game because I like the concept. The idea of a fantasy story where a band of novice heroes tries to accomplish a simple task only to be interrupted by shenanigans sounds like it could be highly entertaining. Unfortunately, this is not the case.

I hated just about every person in Naheulbeuk. Every line of dialogue was groan-worthy at best, and cringey enough to make my insides twist into knots at worst. I knew I was in for a bad time when the very first bit of “humor” involved the Ogre taking a dump at the dungeon entrance. This was followed by everyone in the party constantly talking about the bowel movement and its odor.

There is no joke too low or overdone to make it into this game. Bathroom humor, endless profanity, tired pop culture references, breaking the fourth wall to talk about experience points and character classes, etc. Someone even makes the damn Skyrim “arrow to the knee” joke. It’s been nine years. Let that reference die.

The voice acting doesn’t help. As far as I can tell, there must have been no real direction for any of the actors involved. Their lines all feel rushed and lack any kind of comedic timing. On top of that, some performers are so aggravating that my back still hurts from stiffening up any time they talked. The Elf is supposed to be some kind of Valley Girl-esque idiot and every word she uttered damaged my soul. The Dwarf attempts some kind of Irish or Scottish accent, but it is not working at all. Other characters sound like they were voiced by someone they pulled off the street, handed a script, and shoved in front of a microphone.

None of the characters are likable. They’re all jerks that have little to no redeeming qualities. It’s possible to make hateable people endearing. Look at something like Seinfeld or It’s Always Sunny In Philadelphia. Those casts are filled with contemptible dirtbags who do terrible things, but we still love them. Of course, that’s because they’re funny. When you just have a group who spews hackneyed jokes that can’t even elicit a chuckle, then I’m just going to hate them even more. 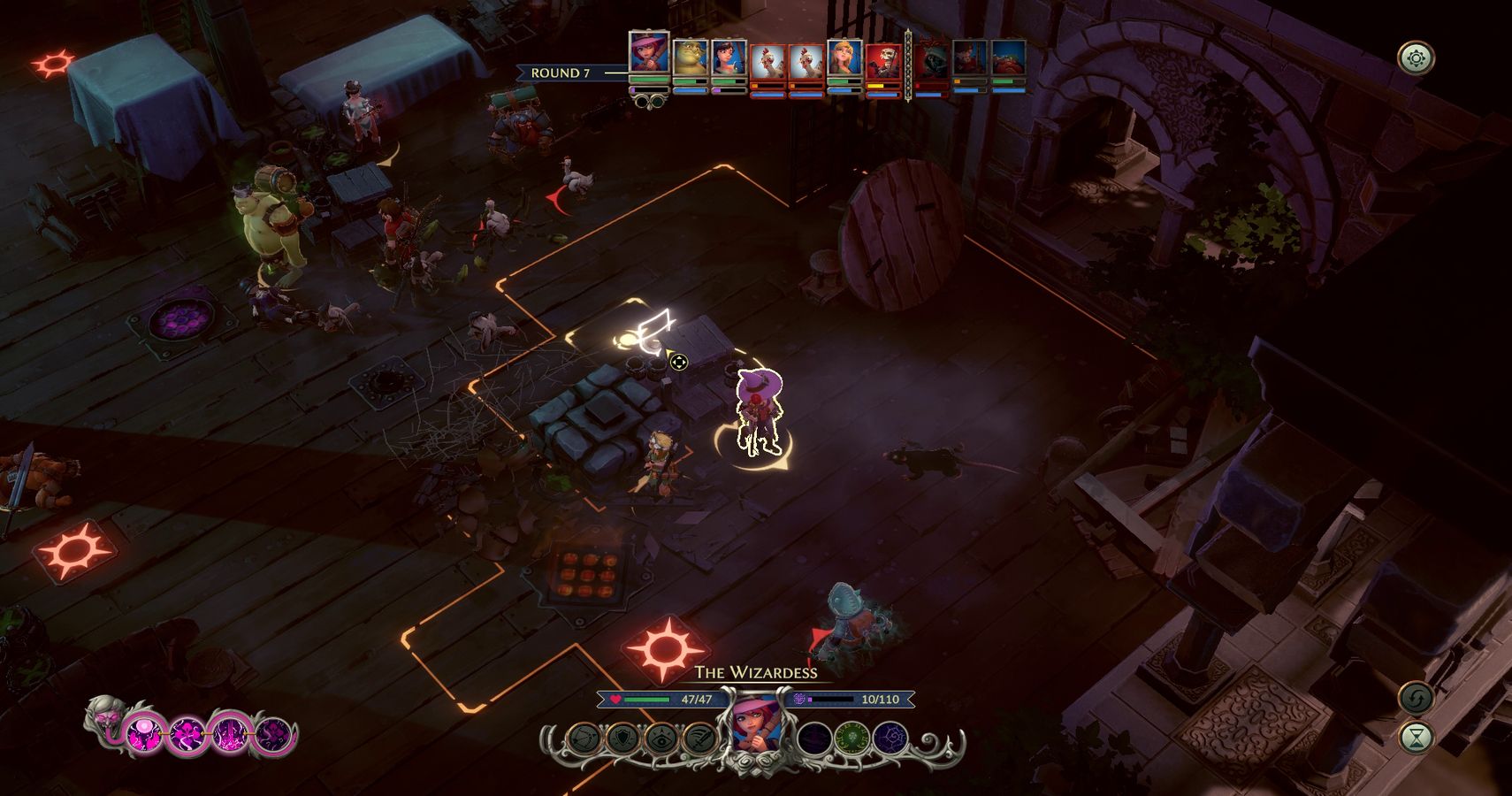 So, how about the gameplay? It’s actually not bad. Mainly because it’s just XCOM.

I know it’s rather reductive to mention XCOM whenever a turn-based tactical strategy game comes up, but it seems like every time an indie developer makes one of these titles, they follow the formula that Firaxis created back in 2012. It’s got all the elements you’d expect. Taking cover to reduce visibility for enemy attacks. Going into overwatch mode (or Vigilance as it’s called here) so you can land an attack if an enemy moves.

The one XCOM-inspired aspect that Naheulbeuk leans on a little too hard is the RNG of landing an attack. Precision is perhaps the most important stat in the whole game, as it’s common to miss an attack. Too common in fact. There were multiple occasions where I found myself with one final enemy to kill only to completely whiff. One time I missed every single strike with my entire crew of characters. This can be fixed by adding skill points into Precision, but it sure seemed like I saw “Miss!” pop-up over a baddie’s head far too often, causing the battle to go on longer than it should have.

While Naheulbeuk does play a lot like XCOM, it does do some things differently. For example, you have access to a large party during battle. You can have around seven to eight different characters in your squad which gives you a bunch of options for strategizing during combat. Each character gets their own active and passive skill trees – which look like Dungeons & Dragons character sheets in a nice touch – along with class-specific weapons and armor. I’ve always preferred having a large platoon to control in these games rather than the paltry three or four soldiers you usually get. It gives you more abilities and more ways to inflict damage.

Even the constant misses seem to factor into the gameplay. There are additional abilities given to you by the goddess of Randomia. Each time you fail an attack, a meter fills up which unlocks powers like teleporting a unit out of trouble or healing the whole party. It makes bungling an attack feel less stressful since you get something out of it. It’s still pretty annoying though.

The Bugs Are Funnier Than The Gags 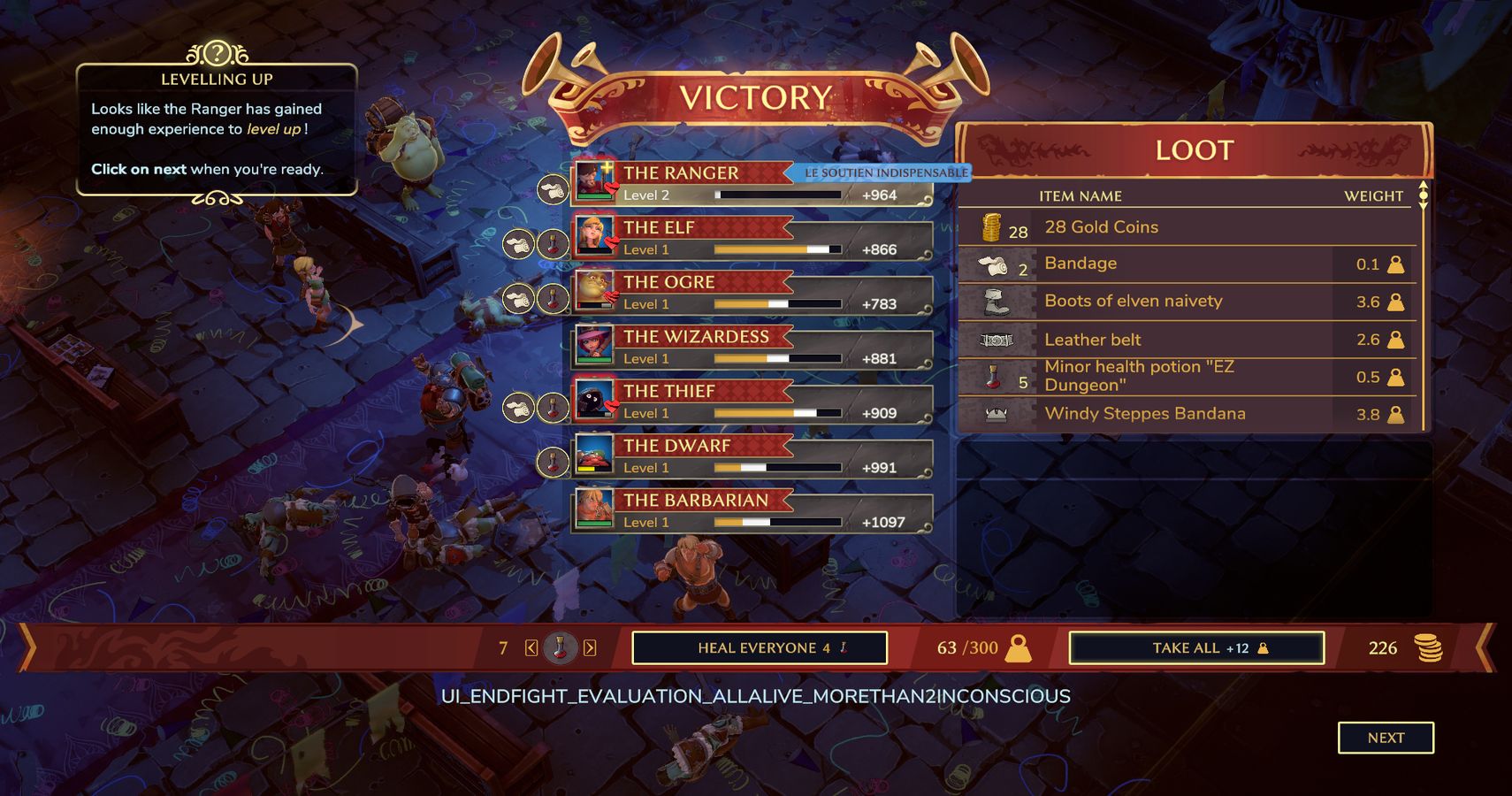 As much as I want to say that playing Naheulbeuk was a smooth ride, I did run into a few bugs. There were multiple instances where the code for a part of the game popped up. So instead of describing a skill or item, it would say something like “SKILL_DESCTREE_AS_PassiveSkill_” and so on. Either that, or the French translation of a word would appear instead of English. The game also starts in French, which I assume is because this is based on a French audiobook… maybe it’s funnier in French? It wasn’t that big of a deal, although it occasionally led to some confusion.

Bugs also showed up in the combat. Characters or enemies would stand around for ages before they decided to make a move. The most annoying time this happened to me was when The Ogre got frozen, knocked down, and then killed. When I revived him, he wouldn’t get off the ground, which stopped the game because I couldn’t do anything. This didn’t happen regularly, but it disrupted battles when it did.

If Everyone Would Shut Up This Might Be Worth Playing 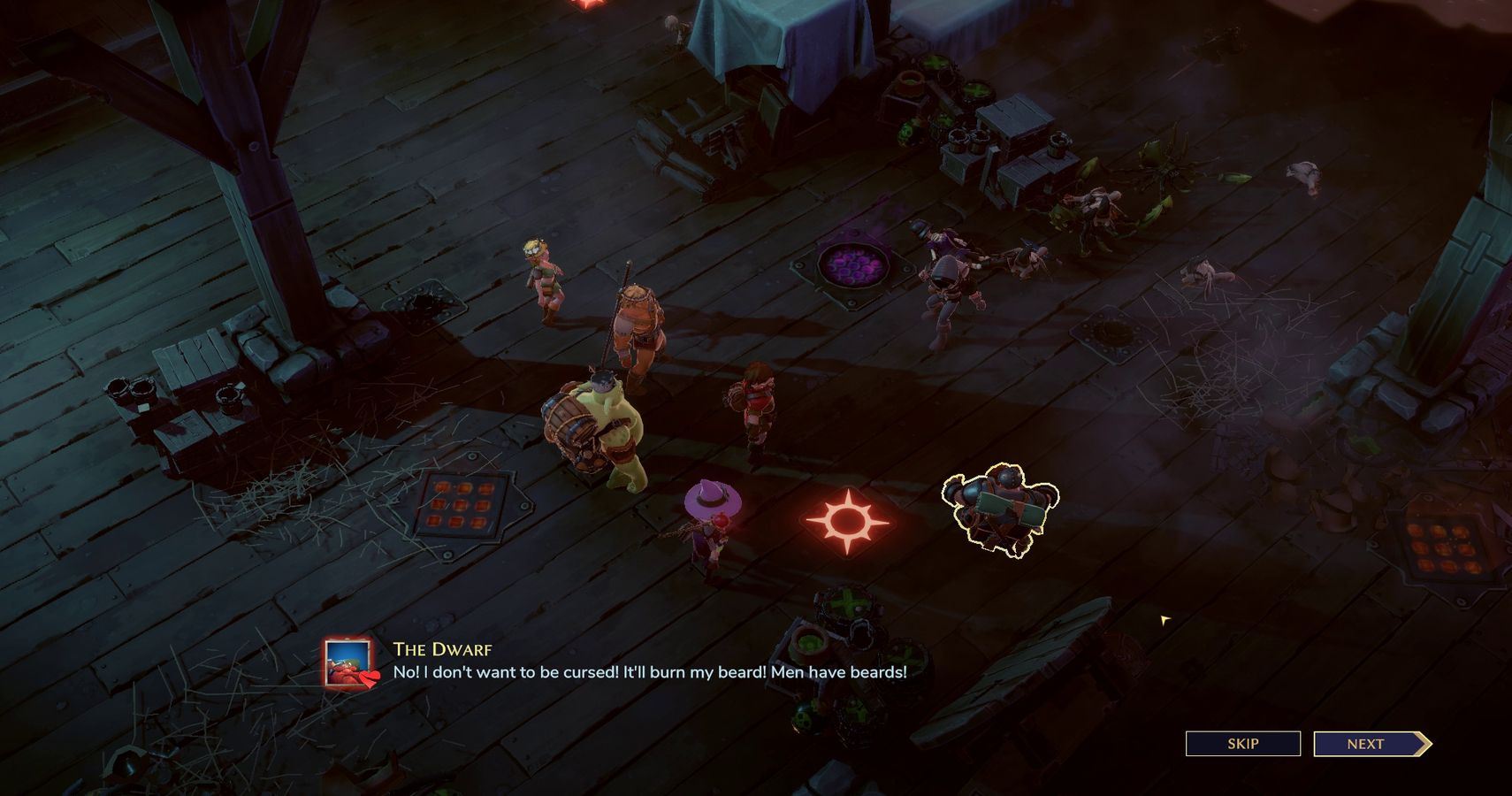 It’s rare that a game’s dialogue and story are bad enough to drag a game down, but that’s the case with The Dungeon Of Nabeulheuk. With its obtuse title, dreadfully unfunny writing, and atrocious voice acting, it’s hard to spend any time traipsing through this nightmare world. It was so bad that I would breathe a sigh of relief every time one of my units died because it meant I wouldn’t have to listen to any more of their quips.

Yet, for as awful as the script and plot are, the gameplay itself isn’t that bad. It’s a more than passable take on the XCOM formula that adds some unique and fun mechanics, but there are dozens of tactical strategy games out there right now that play just as well and are ten times less agitating. It’s possible that your sense of humor will align with the brand of comedy that this game is putting out – and God help you if it does – but even decent strategic combat isn’t enough to make the experience of playing The Dungeon Of Nabeulheuk any more palatable.

I am so happy that I don’t have to type that word again.