Image & Form has done it again. Following hits such as SteamWorld Dig 2 and SteamWorld Heist, the genre-hopping developer set its sights on a new challenge: a steampunk fantasy RPG game. SteamWorld Quest: Hand of Gilgamech, out today for the Nintendo Switch, turns its knights and mages into robots who duke it out in clever turn-based battles. It’s one of the best role-playing games I’ve enjoyed in a long while.

SteamWorld Quest follows the adventures of Armilly, a happy-go-lucky adventurer who dreams of joining the local Hero Guild. Nobody really takes Armilly serious at first: She’s inexperienced, and running around in dingy armor set that’s too big for her. But after the Hero Guild is attacked and her village is ransacked, it’s up to Armilly and her friends to find out what happened.

On the surface, that’s a very by-the-numbers premise for an RPG, but the SteamWorld aesthetic helps keep it fresh. Yes, I’ve seen things like tanks and mages plenty of times before, but I’ve never seen them depicted as a charming frog mech or a college dropout robot, respectively. The unique character concepts, combined with lush, hand-drawn designs, make for a vibrant world that I was happy to explore.

But what really makes SteamWorld Quest sing is its combat system. It’s a turn-based RPG where you select your actions and then watch as your opponent makes its own moves. Your talent pool is dictated by punch cards with an associated gear cost, which you can think of as this game’s version of action points. Basic moves such as a sword attack are “free,” and build up your point pool. More advanced moves, like a cleaving blow, often hit harder or have special status effects — meaning you have to spend some gears to pull them off. Your deck set has a limited number of slots, and there are over 100 punch cards to collect. The cards that end up in your active hand are also randomized, though you can draw for new punch cards a limited number of times.

Together, all these mechanical elements build an addictive mini-puzzle for the player. Do I build a character to be more of a bruiser, or do I give them a good mix of healing and status effect abilities? How many big plays do I stack into a deck? Do you expend all my action points as you go? Or do I save up and try for the snazzier, more advanced punch card? There are no right answers, only different ways to solve the problem.

As the game goes along, it steadily complicates that basic setup. Cards can combine with one another for added effect: You might soak an enemy with water with one character, only to zap them for extra damage with another ally. Characters can also team up with one another if you play cards in the right order — one of my bread-and-butter combos gave Galleo, the shy craftsman, a devastating blow if I made sure to make Armilly attack first. SteamWorld Quest also awards you if you play a full hand of moves owned by the same character. Chaining together three Copernica book bashes — she’s the team mage — ends that turn with a bonus shield engulfing all your allies. Standard things like buffs/debuffs, XP, and equippable accessories add to the strategic elements weaved throughout the game. You’re always thinking of who should attack first, in what order, and with what cards. These considerations become even juicier as you recruit new allies with different types of abilities. 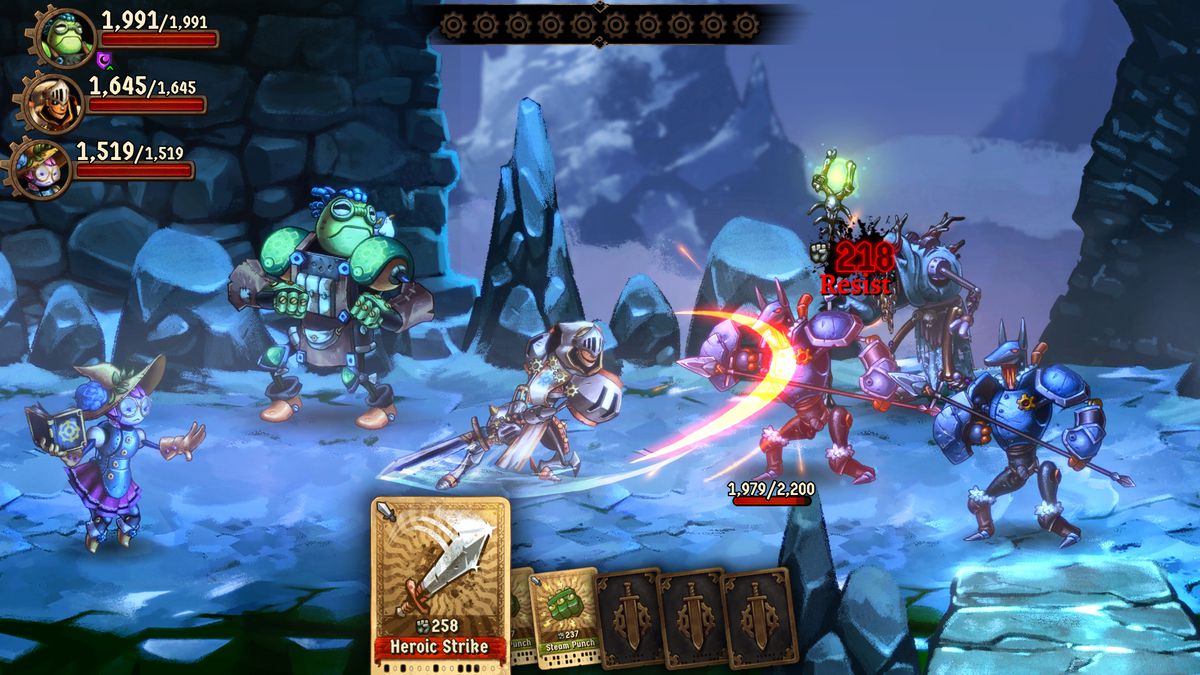 Most of the time, repetitive turn-based battles in an RPG make me check out. I figure out what works best, and then I do exactly that over and over again until a boss comes around. If I grind and gain enough XP to over level, that loop becomes even easier. In SteamWorld Quest, I found even the most basic battles against repeating enemies engrossing because of the randomized deck-building elements. Sometimes, the cards are just not in your favor, and you have to learn to work with what you’ve got. It also helps that the AI is smart, and will totally use its moves to its full advantage. I never felt like I could turn my brain off during combat. I found myself constantly tweaking my deck depending on the challenge at hand. I’m theory-crafting my builds as I write this sentence. To the game’s credit, the mechanics are so well-tuned that I feel encouraged to experiment with all of the possibilities presented to me, rather than trying to find the best all-purpose deck.

SteamWorld Quest feels like an economical game. You’re often walking along corridors, where exploration seems straightforward. There are some NPCs, though not many, and you’re often battling the same enemies over and over again. The story is classic “good versus evil” fare. In a different game, these would be shortcomings that take away from the overall experience. SteamWorld Quest, however, knows exactly what it is and what it wants to accomplish. Like other SteamWorld games before it, Quest takes a basic idea — in this case, turn-based battles with deck-building — and it builds on it, cog by cog, until the machine takes on the satisfying complexity of a watch.

SteamWorld Quest was released April 25 on Nintendo Switch for $24.99. The game was reviewed on Switch using a final “retail” download code provided by Image & Form. You can find additional information about Polygon’s ethics policy here.