Virtual reality is a hard sell. The upfront costs are prohibitively high. The need for a sizable space excludes most apartment dwellers or folks with smaller homes. And the lack of experiences out there hardly justifies the investment.

Nintendo is attempting to overcome those barriers with its Labo VR Kit, which replaces expensive peripherals with craftable cardboard. The company’s novel approach to virtual reality impressed me every step of the way — from construction to play. 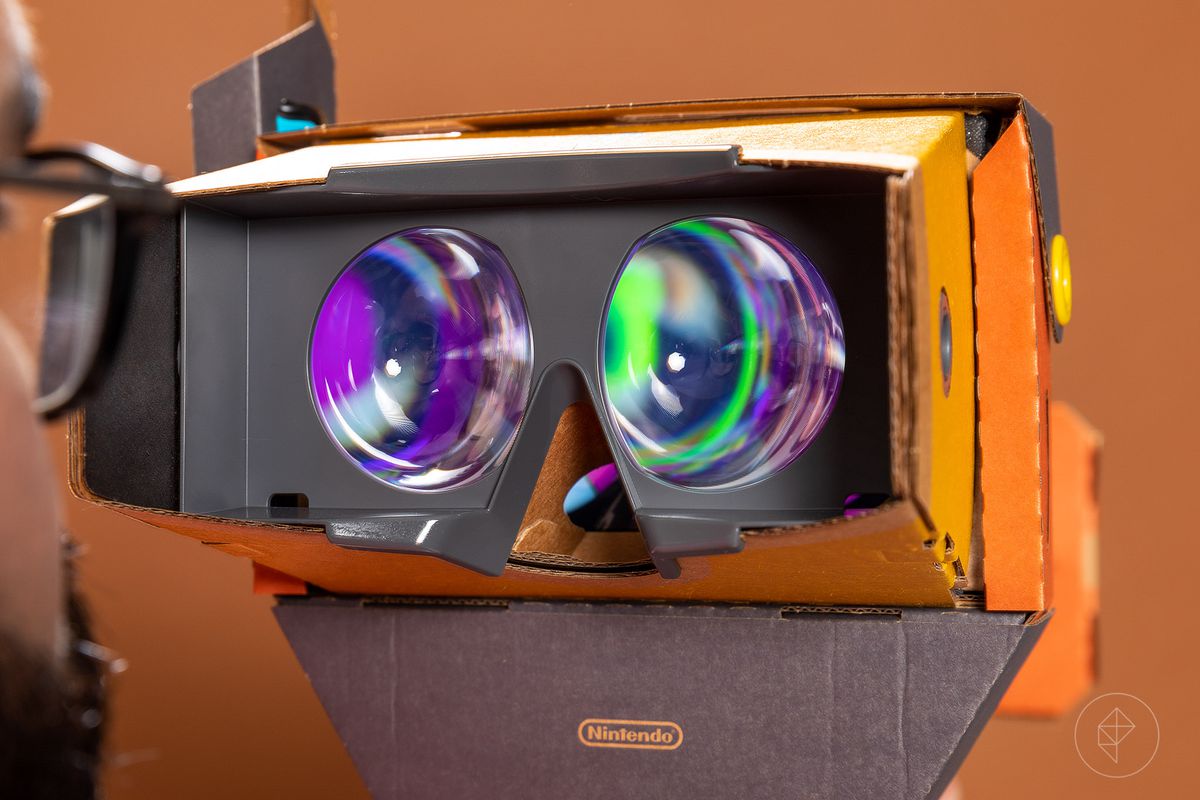 Nintendo created a set of experiences sold in four configurations that are collectively known as the Nintendo Labo Toy-Con 04: VR Kit. The $39.99 Starter Kit includes the pieces to build the required Goggles and the bazooka-like Toy-Con Blaster. The $19.99 Expansion Set 1 comes with the Toy-Con Camera and the bizarre-looking Toy-Con Elephant. Lastly, the equally priced Expansion Set 2 comes with the Toy-Con Bird and the Toy-Con Wind Pedal. The entire set can be purchased for $79.99.

As with the Labo kits before it, the cartridge inside the VR Kit’s case is broken up into three sections: make, play, and discover. Make runs players through dead-simple and upbeat animated instructions to help build each cardboard toy. Play is broken up into a catalog of dedicated experiences for each kit and a “VR Plaza” filled with various minigames that stretch the limits of what each VR kit is capable of. The Discover section is the educational side of the package, which helps demystify the science of how VR works and further explains how each VR kit operates.

I cannot understate how impressive Labo VR is. Traditional VR hardware like the Oculus Rift or the PlayStation 4-powered PlayStation VR may dwarf the horsepower of this virtual reality experience on the Switch, but Labo VR delivers unmatched creativity and ingenuity at a tiny portion of the cost. Yes, this is cardboard, but that doesn’t cheapen any of the wonderful VR experiences Labo is capable of producing.

It all starts with the process of putting together the various kits. 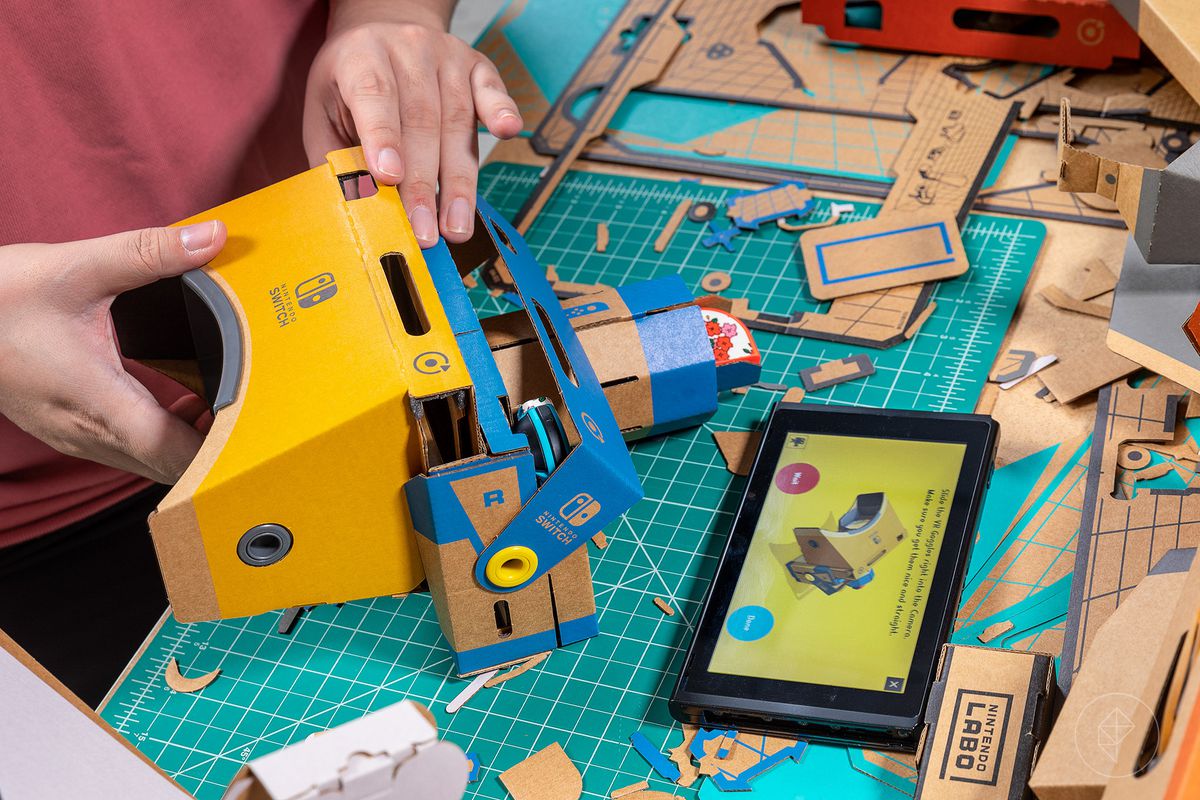 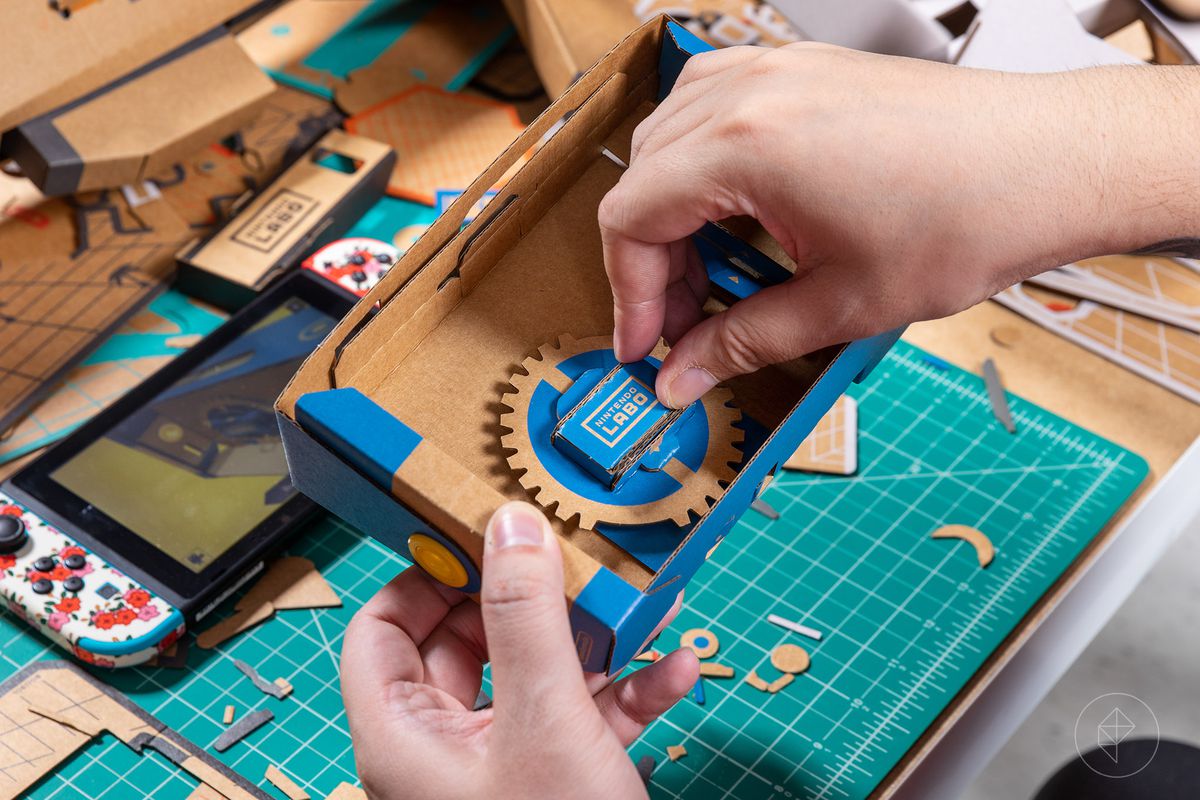 Each Labo VR Kit starts off as several sheets of cardboard shoved into a rectangular box. Within 20-30 minutes — or as long as two hours — I transform the sheets into hefty toy guns that have actual kickback when I pull the trigger, or a camera that satisfyingly clicks as I zoom in and out. Each of the kits hides small yet complex construction tricks that I consistently marveled at while building them.

The building process for the VR Kit is wonderfully foolproof, just like those of its predecessors. I’m tragically bad at putting together even the simplest pieces of furniture, yet I constructed just about everything Labo VR had to offer without any mistakes. That’s not to say there aren’t some fiddly bits: Placing stickers is always a little stressful, and snapping together grommets and washers to make permanent holds can be screwed up if put on backward. However, the software is quick to explain how to fix it in case I mess that part up. There are some more complicated sections, like snapping together multiple pieces, but even then, mistakes are easily rectifiable.

Once I’m done building my various Toy-Cons, getting in and out of each VR experience is just as painless.

Depending on the Toy-Con, I first need to place my left and right Joy-Cons in various places on the kit, each of which are clearly labeled on my cardboard constructions. Then, I slide my Switch into the Labo VR Goggles, which I then insert into the Toy-Con. I can choose my experience from the main menu and select it by double-tapping the top of the goggles.

When I’m in VR, the left Joy-Con and the Switch handle various gyroscope-related functions, while the right Joy-Con and its infrared sensor deal with more complex tasks. Few games on Nintendo Switch use that IR sensor, but Labo VR shows its potential. 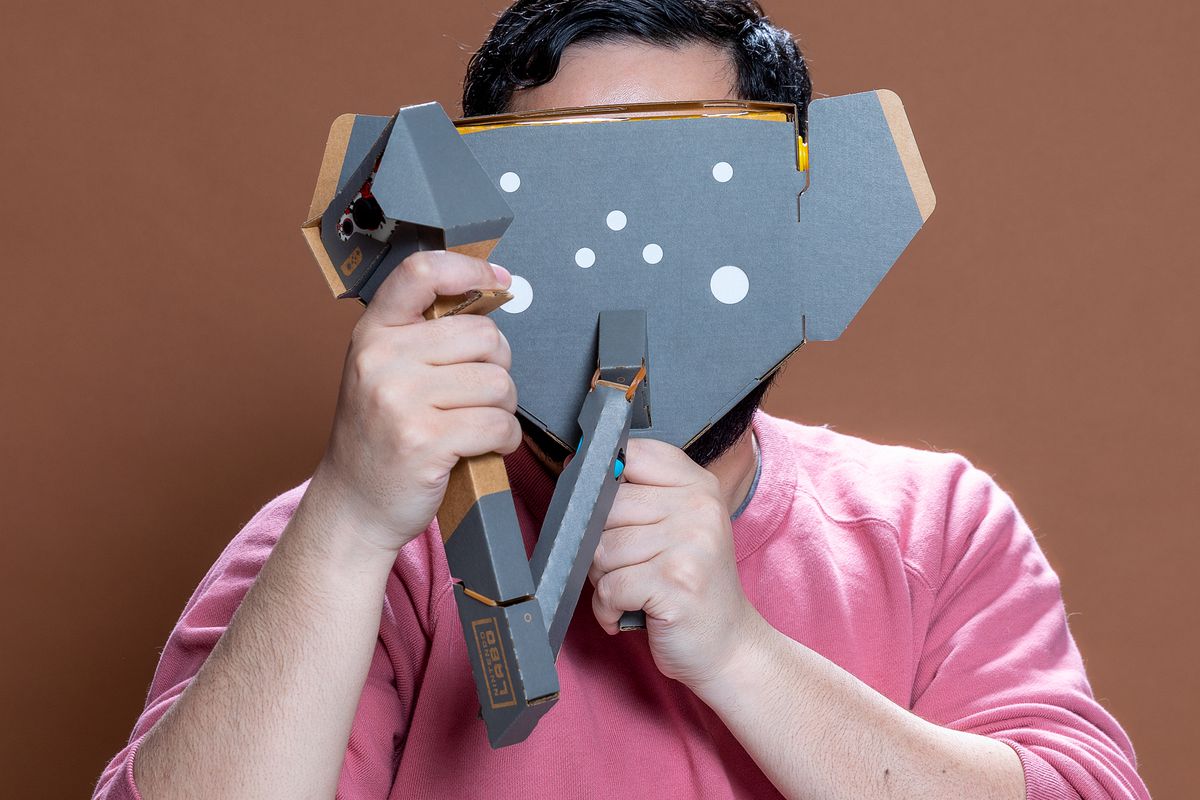 One of the most impressive examples is the Toy-Con Elephant. Despite its bizarre appearance, it’s one of the most cleverly designed aspects of the VR kit.

The Toy-Con looks like a gray elephant mask that I hold up to my face with one hand, while the other holds a Joy-Con at the end of a “trunk,” which is attached to the mask with two long cardboard pieces bound by rubber bands. At first glance, it looks low-tech and janky, but this weird-looking design allows the Elephant to deliver VR experiences with impressive and accurate hand tracking in 3D space.

Its main experience requires me to grab, rotate, and place several floating tracks in full 3D space to help a falling ball reach a goal. At first, the puzzles are simple, but eventually I have to place tracks all throughout the virtual space, and at different angles above me, close to me, and at arm’s length. Another experience allows me to make free-flowing drawings in all three dimensions. Think of it like drawing with tubes in 3D space, instead of with lines on a flat surface. The precise hand tracking to pull that off is impressive, considering that all of this is done while I’m holding a silly elephant mask against my face. 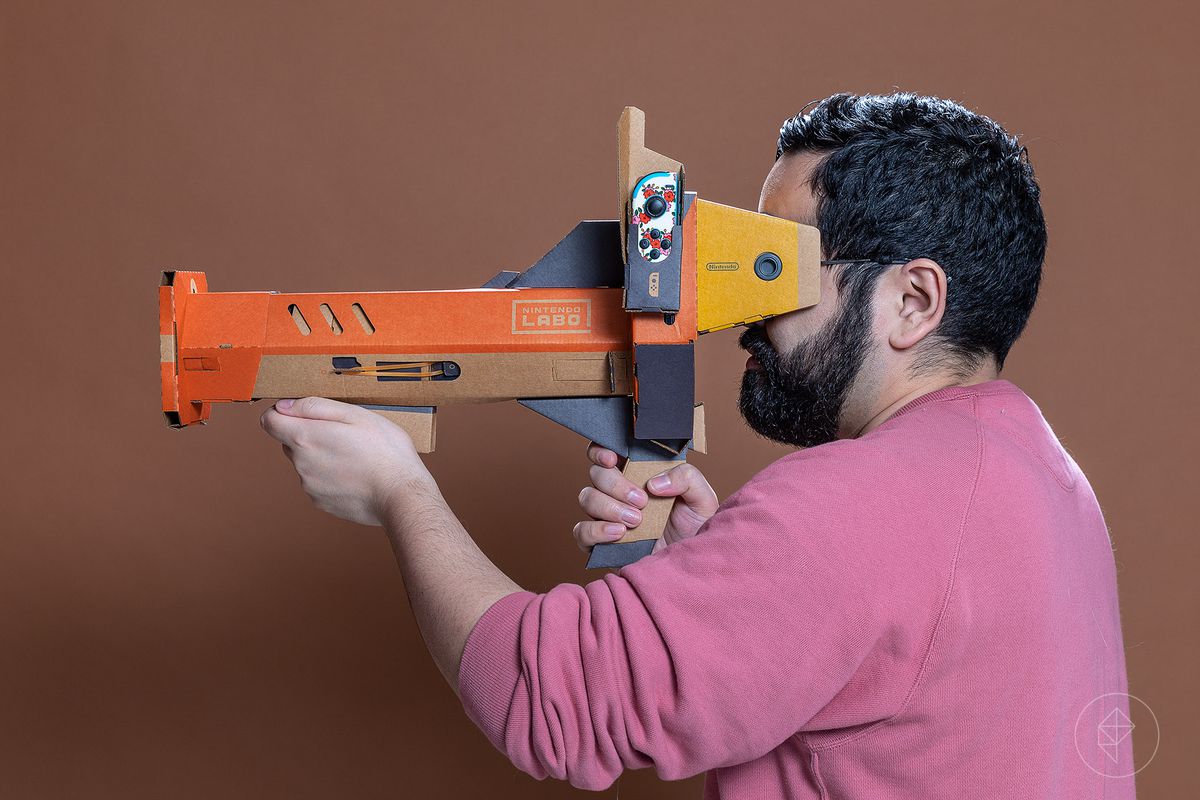 That’s not the only clever, tactile solution found in Labo VR’s cardboard box of tricks. The Toy-Con Blaster hides two hefty blocks of cardboard in its barrel and a trigger mechanism created with rubber bands.

As with a shotgun, I have to pull back a lever to “cock” the Blaster. Then, when I press the thumb trigger, the chamber flies forward, slamming against the other cardboard block in the blaster with a satisfying thud. Paired with the Blaster’s main game, which has me firing a grenade launcher at aliens, the effect really sells the experience. Even the Toy-Con Camera’s simple design hides a charming feature. Inside is a cardboard gear and two tabs that rub against it. As I twist the lens on the cardboard camera, the gear gives off a ratchet-like noise, similar to how a real camera sounds when I zoom in and out. It’s childlike but brilliant in its simplicity.

It’s worth noting that these Toy-Cons require me to hold the Switch and the cardboard creations up to my face with my non-dominant hand the whole time. The combination of the Switch and VR kits isn’t too heavy, but after playing with all of them for an entire day, my left shoulder definitely felt the stress. Thankfully, the software reminds me to take a break every few minutes.

These tactile experiences are what set Labo VR apart: I can interact with all these moving parts, and they mimic reality in a way that no other, more expensive headset can.

Nintendo’s success in replicating physical experiences with its simple cardboard add-ons shines a light on where mainstream VR fails: The controllers that accompany traditional VR headsets can’t replicate the breadth of experiences that the platforms can provide. Sure, the traditional headsets all have much better tracking and more versatile standard controllers than Labo VR. But at best, all they do is provide a facsimile of the hand gestures related to my virtual activities. In the end, I’m still flicking, twisting, and pressing buttons on the same pair of high-end controllers, no matter what I’m actually doing in VR. 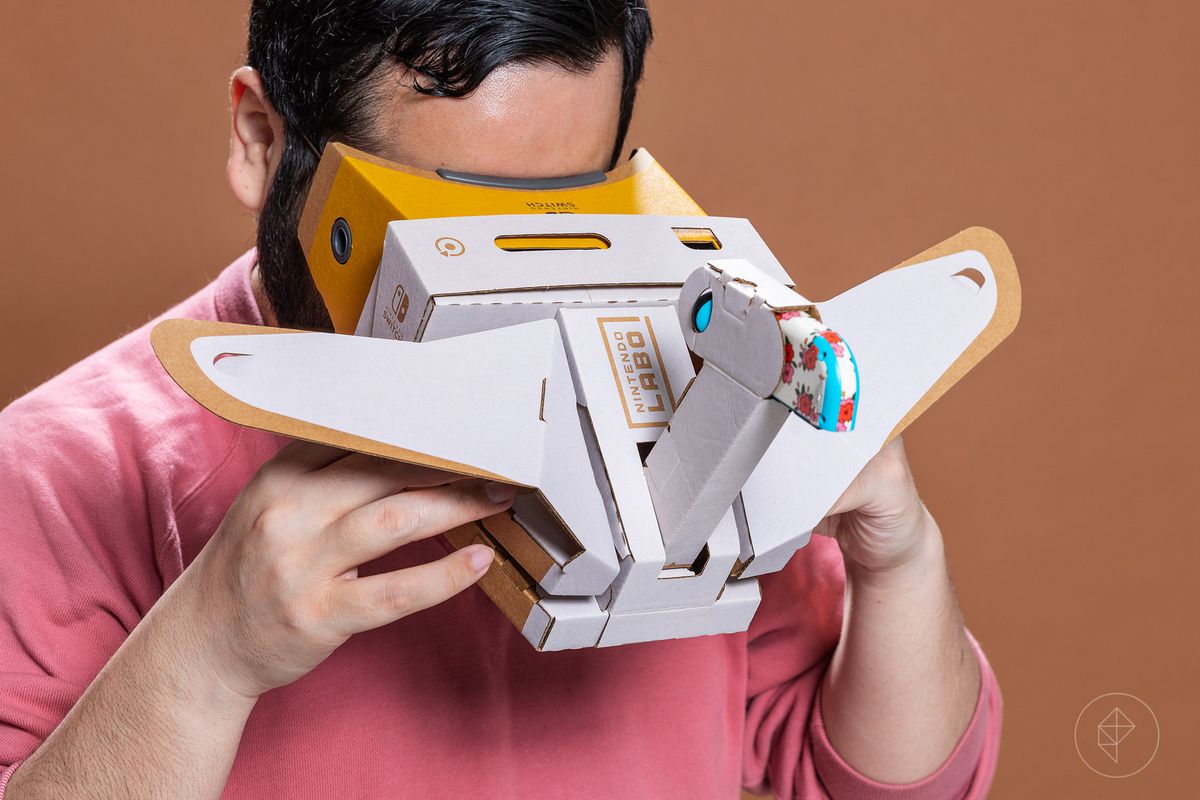 The Labo VR kit and its whimsical specialty controllers push VR’s boundaries by using simple, folded-up cardboard cutouts to create tactile, engrossing experiences. Each is a distinct, physical activity that further extends the suspension of disbelief VR provides. The tools to deliver this sensation are cheap, but they work in tandem to create small and engaging virtual reality experiences that rival those of its competitors.

To be clear, what’s on offer right now is still limited to each kit’s associated games. VR support for Switch classics like Super Mario Odyssey and The Legend of Zelda: Breath of the Wild is coming in the future as “bite-sized” exercises, so it remains to be seen if Nintendo will further support the platform with fuller experiences down the line.

If you’ve never experienced VR, or have and weren’t fully convinced by the other hardware on the market, I think you’ll find Nintendo’s Labo VR kit worth checking out. At worst, you’ll spend a few hours having fun putting together some charming cardboard toys and seeing what parlor tricks your Nintendo Switch can do with them. At best, you’ll dive into one of the most inexpensive, yet engrossing, VR experiences out there.