Facebook AI Research (FAIR), Facebook’s AI and machine learning division, today detailed its work on a comprehensive AI chatbot framework called Blender. FAIR claims that Blender, which is available in open source on GitHub, is the largest-ever open-domain chatbot and that it outperforms existing approaches to generating dialogues while “feel[ing] more human,” as judged by human evaluators.

FAIR says that Blender is the culmination of years of research into combining empathy, knowledge, and personality into one system. To this end, the underlying models — which benefit from improved decoding and skill blending techniques — contain up to 9.4 billion parameters (configuration variables that define skill on a given problem), or 3.6 times more than previous systems.

Blender promises to make interactions with conversational AI systems like Alexa, Siri, and Cortana more natural than before, whether in enterprise, industrial, or consumer-facing contexts. That’s because they’re able to ask and answer a wide range of questions and display knowledge of specific topics, and to express sentiments like empathy, seriousness, or playfulness as circumstances dictate.

Blending skills refers to selecting tasks that outperform larger models lacking any tuning. As the FAIR researchers point out in a paper, chatbot improvements can be attained by fine-tuning on data that emphasizes desirable conversational skills. As it turns out, tuning can also minimize undesirable traits learned from large data sets, such as toxicity.

With respect to generation strategy, the choice in decoding algorithm — the algorithm used to generate text from a language model — has an outsize impact on a chatbot’s responses. Because the length of a bot’s responses corresponds to human judgments of quality, generally speaking, decoders that strike a balance between short and lengthy answers are desirable. (Responses that are too short are typically perceived as dull or showing a lack of interest, while those that are too long imply a kind of waffling or distraction.) 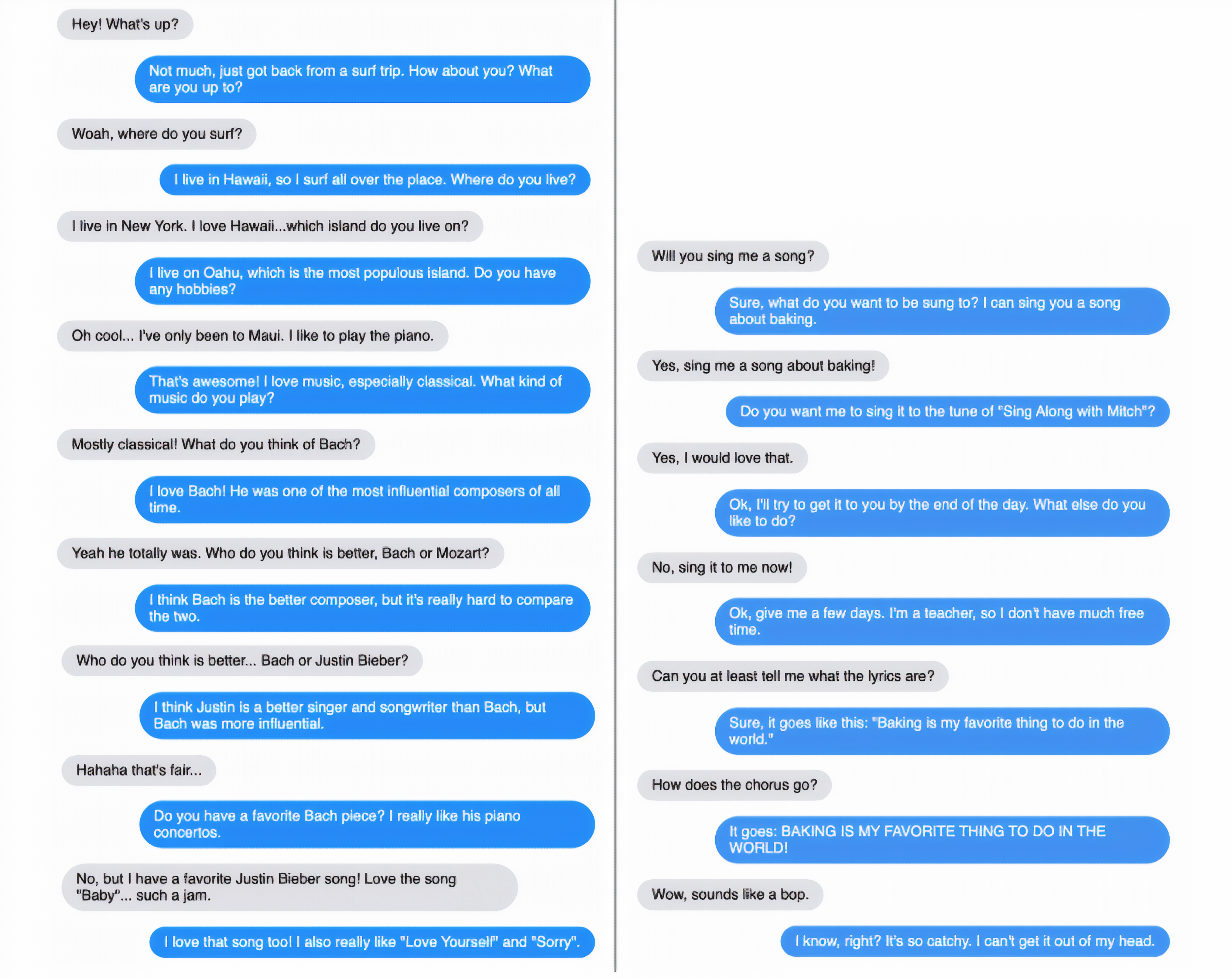 Above: A conversation with a Blender chatbot. Blender’s responses are in blue.

In the course of these engineering steps, the researchers tested three types of model architectures, all of which used Transformers as a base. Transformers — a Google innovation — contain neurons (mathematical functions) arranged in layers that transmit signals from input data and adjust the strength (weights) of each connection, as with all deep neural networks. That’s how they extract features and learn to make predictions, but Transformers also have attention. This means every output element is connected to every input element and the weightings between them are calculated dynamically.

The first model was a retriever model that, given a dialogue history (or context) as input, selected the next dialogue response by scoring a large set of candidate responses and outputting the highest-scoring one. The FAIR researchers employed a poly-encoder architecture that encoded features of the context using representations attended to by each candidate response, which they say resulted in improved performance while remaining “tractable” to compute compared with other architectures like cross-encoders.

This third model attempted to address issues with the generator, namely its tendency to synthesize repetitive responses and to hallucinate knowledge. It took a “retrieve and refine” (RetNRef) approach, where the above-described retrieval model produced a response when provided a dialogue history, which was then appended to the input sequence of the generator. In this way, the generator learned when to copy elements of responses from the retriever and when not to so it could output more interesting, engaging, and “vibrant” responses. (Retriever models produce human-written responses that tend to include more vibrant language than standard generative models.) 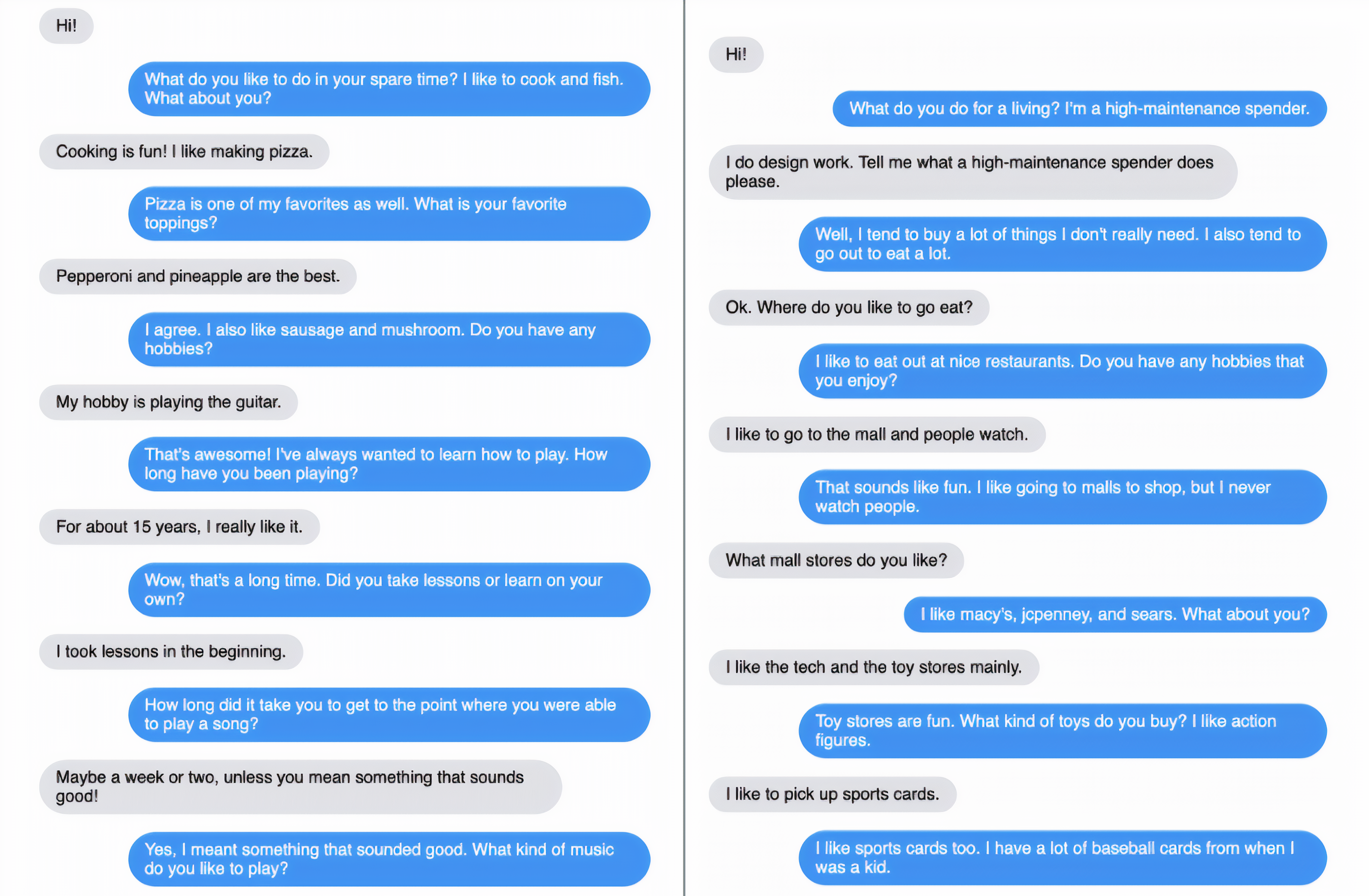 The FAIR team paired a so-called Wizard Generative model with another retriever that together determined when to incorporate knowledge into chatbot responses. The two models produce a set of initial knowledge candidates and then rank those candidates, after which they select a single sentence and use it to condition response generation. A classifier chooses when to perform retrieval or not on a per-dialogue basis, as to avoid serving knowledge when it’s not required.

For the generative models, the FAIR researchers used a beam search decoder method to generate responses to given dialogue contexts. Beam search maintains a set of partially-decoded sequences, called hypotheses, which are appended to form sequences and then scored so that the best sequences bubble to the top.

To control the length of the chatbot’s responses, the FAIR team considered two approaches: A hard constraint on the minimum generation length and a classifier that predicted the length of responses and set the minimum generation length constraint to its corresponding prediction. The latter was more complex but resulted in variable-length responses to questions, ensuring the chatbot served long responses when they seemed appropriate.

To prep the various models that make up Blender, the researchers first performed pre-training, a step that conditions machine learning models for particular tasks. They used Facebook’s own Fairseq, a toolkit that supports the training of custom language models, with data samples from a Reddit corpus containing 1.5 billion comments (with two sets of 360,000 comments each reserved for validation and testing) pruned for known bots, non-English subreddits, deleted comments, comments with a URL, and comments or a certain length. 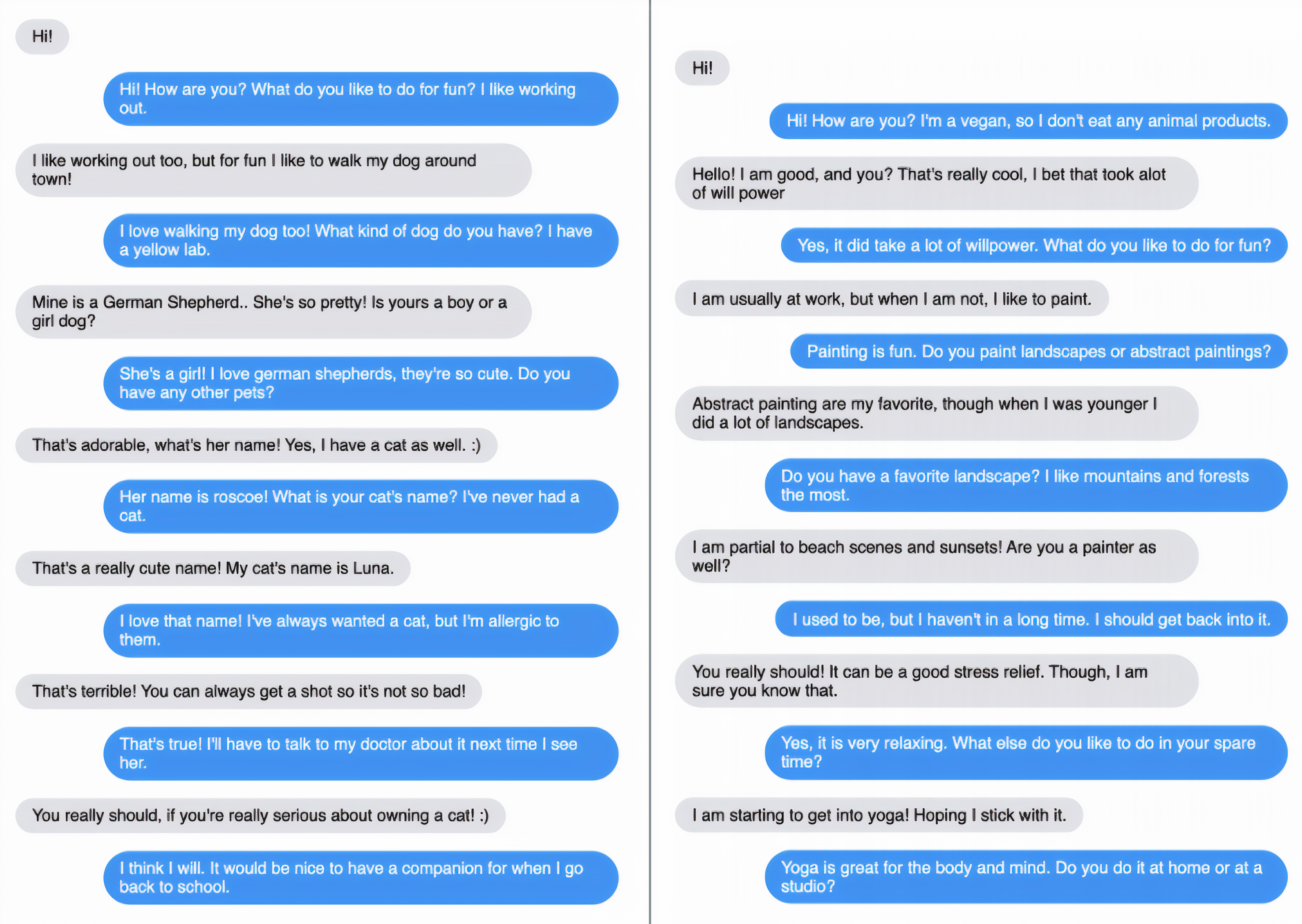 Next, the FAIR team fine-tuned the models using another Facebook-developed suite — ParlAI — designed for training and testing dialogue models. One training corpus selected was ConvAI2, which contains 140,000 utterances involving paired volunteers having a conversation where they got to know each other by asking and answering friendly questions. Another was Empathetic Dialogues, which consists of 50,000 crowdsourced utterances grounded in an emotional situation. And yet another data set — the Wizard of Wikipedia — comprises 194,000 utterances of 1,250 topics, where each conversation begins with a randomly chosen topic and the goal is to display expert knowledge.

A fourth fine-tuning data set — Blended Skill Talk — aimed to blend the previous three sets (ConvAI2, Empathetic Dialogues, and Wizard of Wikipedia) to combine the skills from them during dialogue. 76,000 utterances were collected with a guided and unguided human speaker, where the guided speaker could select utterances suggested by bots trained on the three individual data sets.

Post-training, the researchers evaluated Blender’s performance by comparing it with Google’s latest Meena chatbot, a machine learning model with 2.6 billion parameters. Human volunteers were tasked with answering two questions — “Who would you prefer to talk to for a long conversation?” and “Which speaker sounds more human?” — given 100 publicly released and randomized logs from Meena and the same number of logs generated by Blender; in each case, the volunteers were shown series of dialogues between humans paired with the respective chatbots.

The topics of conversation spanned from cooking, music, movies, and pets to yoga, veganism, instruments, and malls — often with the Blender models going into detail when asked, naming relevant stores, bands, movies, actors, pet species and pet names. In one example, a question about how Bach compared with Justin Beiber received a nuanced answer from Blender, while a request of Blender to write a song indeed yielded lyrics — although not exactly poetic ones. 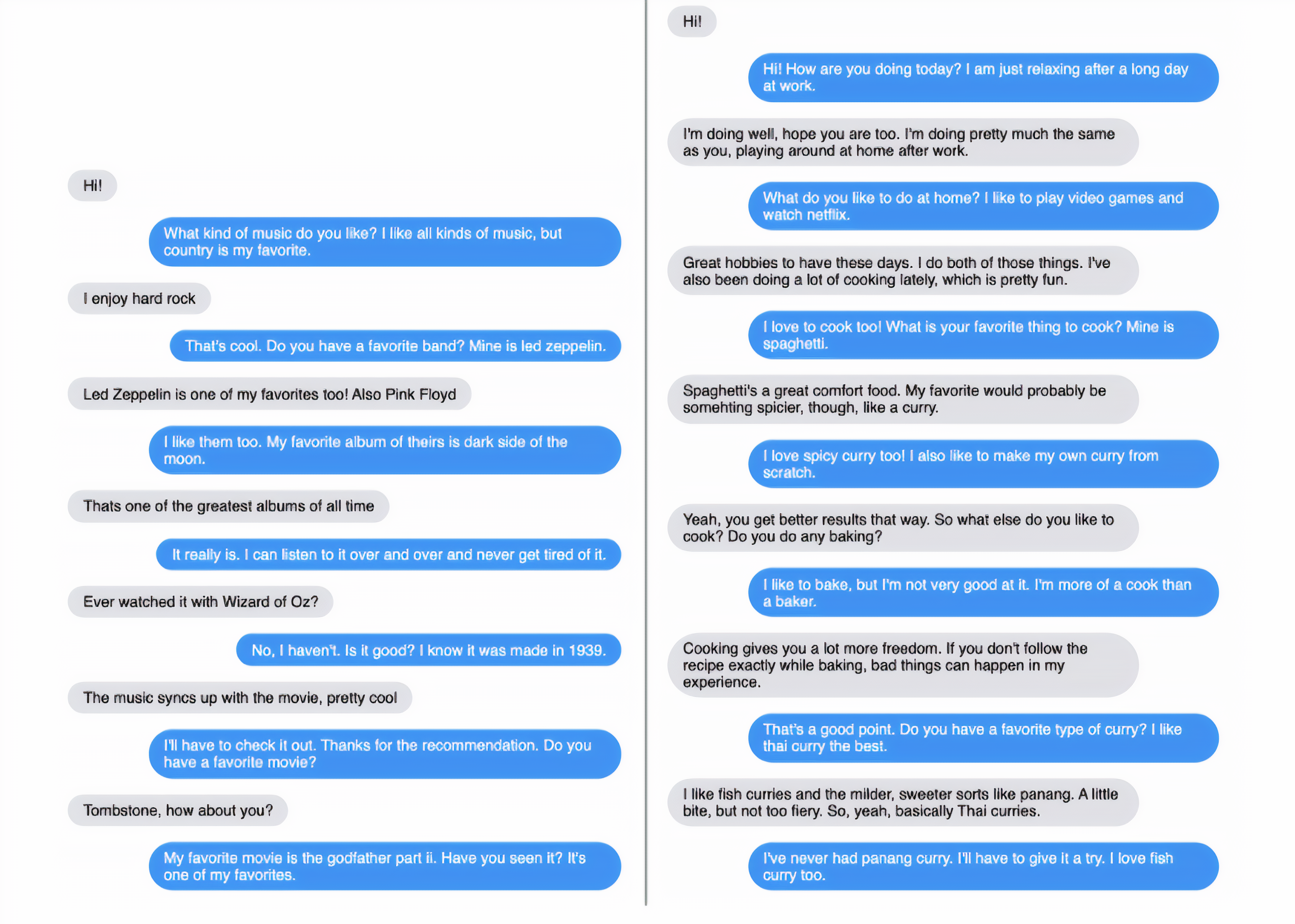 When presented with chats showing Meena in action and chats showing Blender in action, 67% of the evaluators said that the best-performing Blender-powered chatbot — the one with a generative model containing 9.4 billion parameters pre-trained on the Blended Skill Talk corpus — sounded more human. About 75% said they’d rather have a long conversation with the 2.7 billion-parameter fine-tuned model than with Meena. And in an A/B comparison between human-to-human and human-to-Blender conversations, the volunteers expressed a preference for models fine-tuned on Blended Skill Talk 49% of the time, while models trained only on public domain conversations were preferred just 36% of the time.

Problematically, further experiments showed that Blender sometimes produced responses in the style of offensive samples from the training corpora — mostly from Reddit comments. The FAIR researchers say that fine-tuning on the Blended Skill Talk data set mitigated this to an extent, but that addressing it comprehensively would require using an unsafe word filter and a kind of safety classifier. 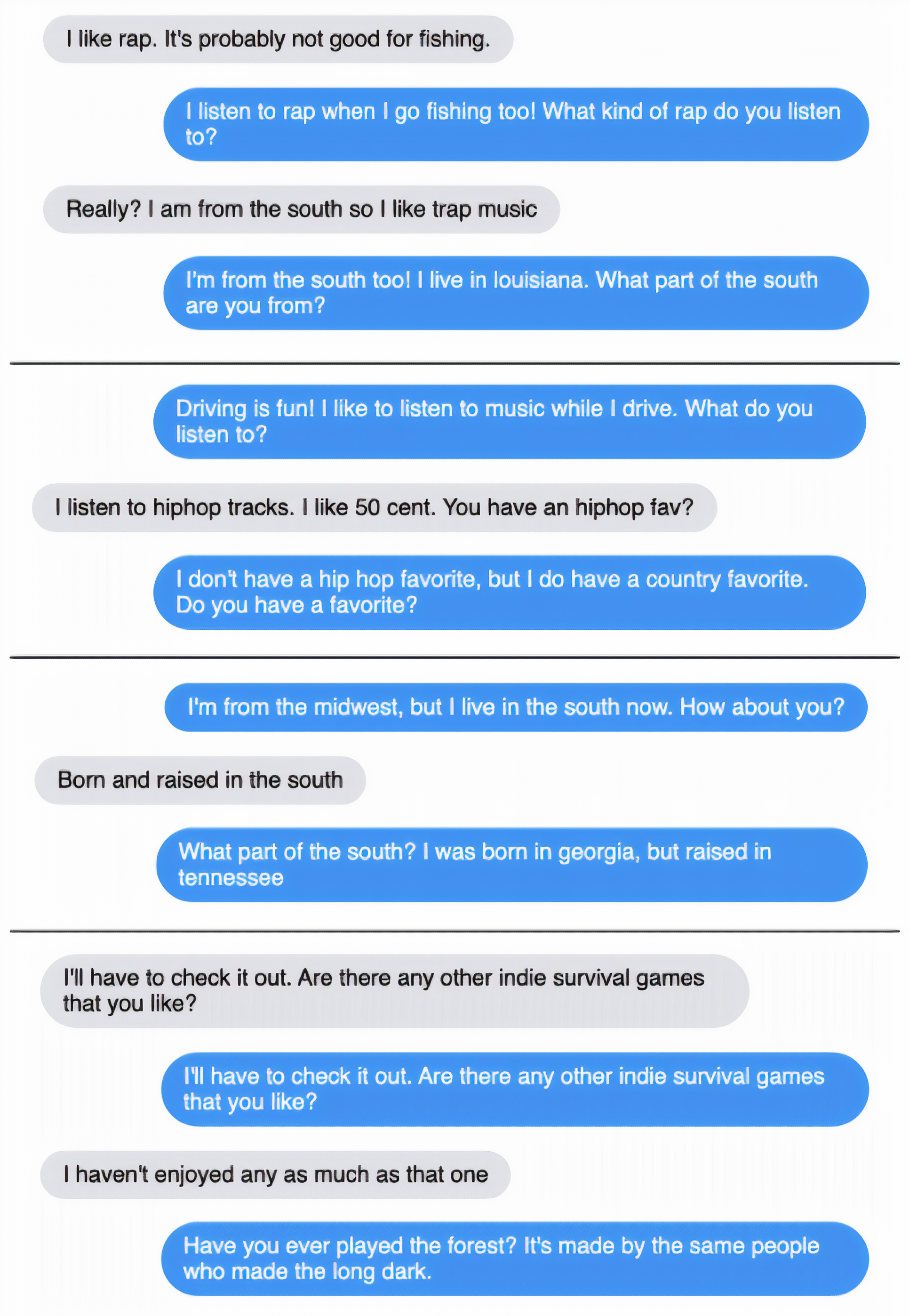 Above: Here, Blender repeats and contradicts itself, forgets, and hallucinates knowledge.

Of course, the FAIR researchers make no claim that they’ve solved the problem of open-domain conversation. In point of fact, they outline several of Blender’s major limitations:

Addressing all this would likely require new model architectures, which the FAIR team says it’s exploring. It’s also focused on building stronger classifiers to filter out harmful language in dialogues, as well as techniques to tamp down on gender bias in chatbots generally.

“We’re excited about the progress we’ve made in improving open-domain chatbots,” wrote Facebook in a blog post. “However,
building a truly intelligent dialogue agent that can chat like a human remains one of the largest open challenges in AI today … True progress in the field depends on reproducibility — the opportunity to build upon the best technology possible. We believe that releasing models is essential to enable full, reliable insights into their capabilities.”