The warehouse robotics market is on the upswing. In point of fact, analysts at Allied Market Research anticipate it’ll reach $5.186 billion by 2023 as tasks like pick-place, packaging, transportation, packaging, and palletizing become increasingly automated. A recent survey published by EyeForTransport reflects this — it revealed an 18% year-over-year increase in the testing of warehouse robotics, with 25% of the 100 companies surveyed revealing that they piloted robots in a limited number of warehouses in 2019.

Perhaps it’s no surprise, then, that firms like Vecna Robotics haven’t had trouble attracting investors. The Waltham, Massachusetts-based workflow orchestration and self-driving forklift provider today announced that it’s raised $50 million in series B financing led by Blackhorn Ventures, with participation from new backers Highland Capital and Fontinalis Partners and existing backers Drive Capital and Tectonic Ventures. It brings the company’s total funding to over $60 million following a $13.5 million series A in August 2018.

Founder and CEO Daniel Theobald noted that the fresh capital comes after a year in which Vecna installed its robots and software in some of the world’s largest distribution centers, with deployments at FedEx Ground, Milton CAT, DHL Supply Chain,GEODIS, Medline, and others and strategic partnerships with UniCarriers Americas and RICOH. He added that this latest funding will help to expand Vecna geographic footprint and accelerate the development of new products in the material handling market.

“A highly orchestrated solution that leverages the best of robots, manually-operated equipment and the irreplaceable human factor is the key to long-term success for our customers,” said Theobald. “This investment cements our position as the world’s leading material handling automation company and helps accelerate our growth strategy in the coming year and beyond.”

Vecna — a spin-off from Vecna Technologies, which was counded in College Park, Maryland in 1998 by Theobald, an MIT engineering alumni —  initially received funding from the U.S. Army, DARPA, and other government agencies to develop a humanoid robot (the Battlefield Extraction-Assist Robot, or BEAR) capable of rescuing wounded soldiers from the battlefield. However, ahead of its incorporation in 2018 as a wholly-owned subsidiary of Vecna, it pivoted its focus, extracting the autonomy software from the BEAR’s hardware and using it to develop logistic robots like QC Bot, a courier piloted in hospitals to distribute medicine and food. 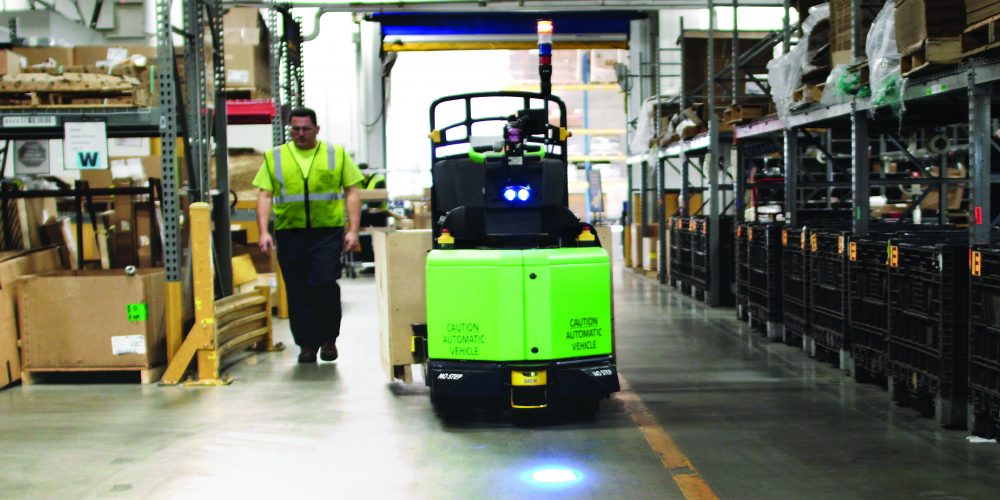 Vecna’s platform incorporates fully autonomous pallet trucks and tow tractors to maximize efficiency. To this end, a component called Pivotal — an AI-based orchestration agent — manages fleets while interfacing with human workers and other equipment to optimize freight capacity, increase warehouse capacity, and cut down on waste. Other products help to automate cross-docking (unloading materials from an incoming truck or railroad car into outbound trucks, trailers, or rail cars) and line-side delivery (using laborers to deliver material to the assembly line), as well as case-picking (the gathering of full cartons or boxes of product), kitting (grouping and packaging separate but related items together as one unit), goods-to-person (moving product to an operator who picks what’s needed to fulfill orders), and more.

They’re managed through Beacon, which Vecna describes as the “engine” behind its performance improvement. It juggles software updates and data analytics, analyzing data collected by Vecna robots as they work and feeding it back to them to improve performance through AI and machine learning. Warehouse workers can quickly view display sequenced pick lists containing SKU images, quantity, and tote information, and coordinate machines in real time based on location, availability, and more.

“In speaking with Vecna Robotics’ customers, it was clear that the company offers best-in-class solutions and services,” said Highland Capital’s Bob Davis, who intends to join Vecna’s board of directors alongside Blackhorn Ventures’ Trevor Zimmerman.  “The company has an industry leading position … and we look forward to working with them as they revolutionize material handling around the world.”

Vecna has competition in spades, it’s worth pointing out. Amazon acquired robotics company Kiva Systems for $775 million in March 2012, and last November, DHL announced it would invest $300 million to modernize its warehouses in North America with internet of things sensors and robots. Separately, startups like Attobocits and CommonSense Robotics have raised tens of millions of dollars for compact automated fulfillment centers that can slot into tight spaces like underground garages.